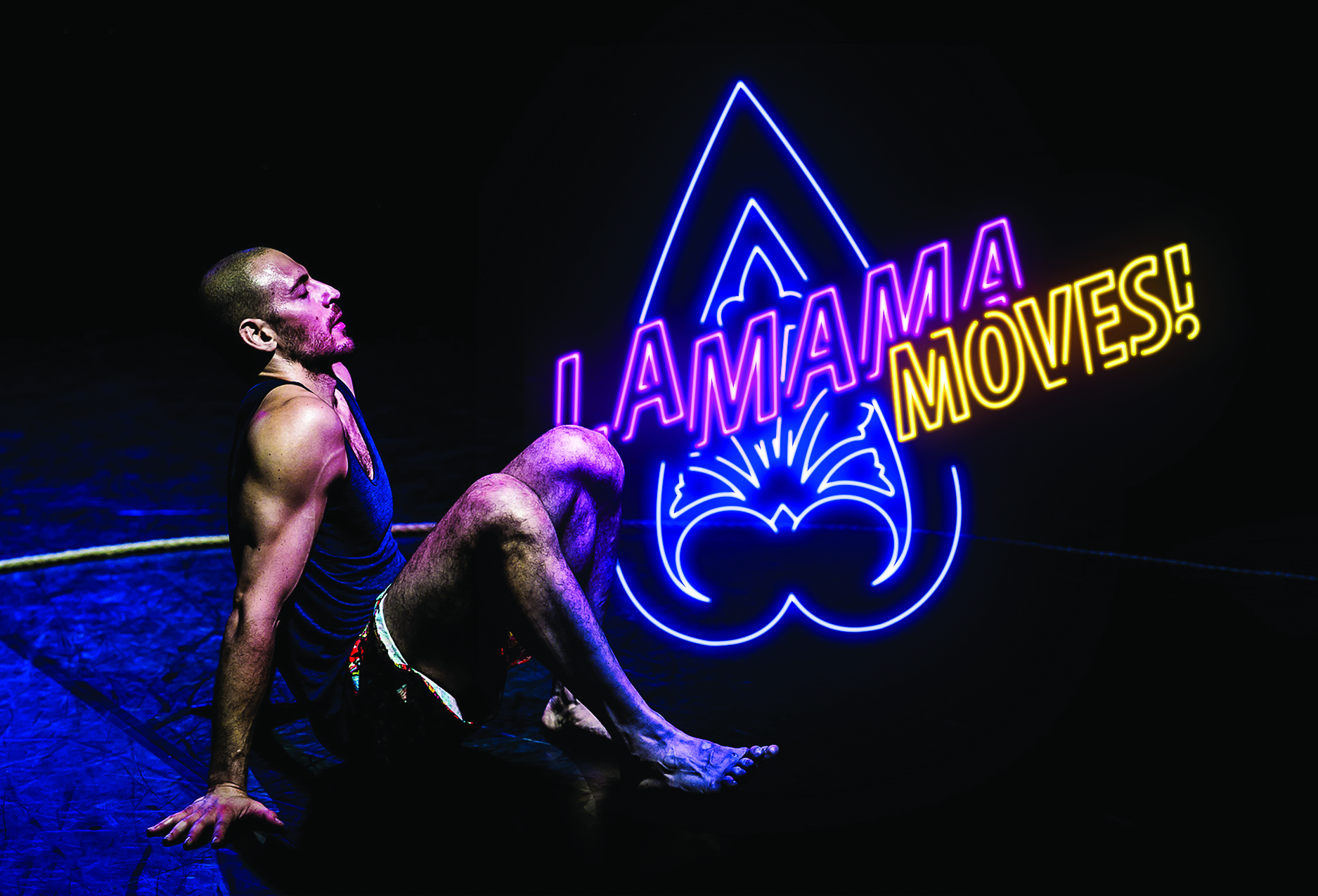 Two and three-show packages are available.

The 17th edition of the La MaMa Moves! Dance Festival is presented at The Ellen Stewart Theatre and the Downstairs Theatre. Curated by Nicky Paraiso, the three-week festival will feature new works by nine dance artists/companies with bold and diverse approaches to performance. The 2022 festival will take place April 14–May 5.

“This season’s choreographers are working with a myriad of issues: reexamining the meaning of home, researching postmodern dance as a racial construct, and recognizing the essential need for trust in our everyday lives. These concerns have arisen in a time of crisis, uncertainty, and also reflection, questioning the ways we respond with our bodies, our minds, our hearts. The artists in this season’s La MaMa Moves! Dance Festival have taken on these issues in creative, thoughtful, deeply felt ways,” said Nicky Paraiso.

Tiffany Mills Company
The Home Project, a dance-theatre work inspired by the wealth of experiences that shape and bind us in our homes. Part of Tiffany's 20th Anniversary Season celebration

Gerald Casel Dance
Not About Race Dance, a performance response to the racial politics of postmodern dance

Compañía Cuerpo de Indias's Flowers for Kazuo Ohno (and Leonard Cohen) is a special benefit performance for Caring for Colombia.

Caring for Colombia builds bridges and mobilizes resources between U.S. donors and organizations to empower high-impact social projects in Colombia. We foster strong relationships with local leaders and institutions, including Compañía Cuerpo de Indias (the professional company of El Colegio del Cuerpo—The School of the Body) that inspire transformation in the most vulnerable communities.

Valetango Company
Confianza (Trust), a work that highlights the choreographic potential of radical interdependency through tango's legacy of improvisation

John Scott
Cloud Study, which uses the idea of clouds as a traveling dreamy mass and carrier of storms to explore the dynamic between two dancers

Gerald Casel is artistic director of GERALDCASELDANCE. His choreographic work complicates and provokes questions surrounding colonialism, collective cultural amnesia, whiteness and privilege, and the tensions between the invisible/perceived/obvious structures of power. Casel is an Associate Professor of Dance and Provost of Porter College at UC Santa Cruz. A graduate of The Juilliard School with an MFA from UW Milwaukee, Casel received a Bessie Award for dancing in the companies of Michael Clark, Stephen Petronio, Zvi Gotheiner, and Stanley Love. His choreography has been presented by Danspace Project, Dance Theater Workshop, The Yard, ODC Theater, Yerba Buena Center for the Arts, Dancebase Edinburgh, and Kuan Du Arts Festival Taiwan, and has been developed in residencies at The Bogliasco Foundation, The National Center for Choreography-Akron, ODC Theater, and CHIME. Dancing Around Race, a community engagement process that interrogates racial inequity in the San Francisco Bay Area and beyond continues to grow under his leadership. Casel’s Not About Race Dance has been awarded a National Dance Project grant, was in residence at the Maggie Allesee National Center for Choreography, and premiered at CounterPulse with a forthcoming tour around the US.

Directed by choreographers Álvaro Restrepo and Marie France Delieuvin, Compañía Cuerpo de Indias is the professional company of El Colegio del Cuerpo (The School of the Body). The company has been recognized as one of the emblematic proposals of Latin American contemporary dance in the world, having performed in the Americas, Europe, Asia, and Africa. A new identity of dance has emerged from the artistic vision of its directors and the diverse mixture of ethnic, cultural, socioeconomic, and artistic origins of the dancers. Some of them have been trained at El Colegio del Cuerpo since childhood; and some come from traditional folk dance, others from classical ballet, hip-hop and/or contemporary techniques.

Valeria Solomonoff was born in Argentina and is based in New York City. She is a wide-ranging innovator who uses her tango roots to reimagine new possibilities of partnering. She has choreographed for Broadway, films, plays, circus, and has created her own shows. Solomonoff was Resident Fellow at Center for Ballet and The Arts, NYU, and is a Research Associate at Partnering Lab, Harvard University. In addition to coaching Broadway choreographers on tango scenes, she co-choreographed New York City Center’s 2019 production of the musical Evita. Her show Tango por Ellos received two ACE Awards. She received two HOLA Awards for choreographing Tango Fever and Doña Flor y Sus Dos Maridos, and received two ACE nominations for Tango Intimo, a show she directed and created. Solomonoff was the founder and co-director of TangoMujer, the first all-female tango ensemble worldwide and performed for the president of Argentina at the Metropolitan Opera House. She is a Tango Professor at NYU Tisch, New Studio on Broadway, and the founder of Broadway Tango, a movement style that adapts Tango to the Broadway stage. Most recently she received the inaugural Lucy Bowen Award for Inclusive Choreography to create a piece for the Mark Morris Dance Group’s Dance for PD program.

John Scott is a Dublin born choreographer, dancer, and singer. His company, Irish Modern Dance Theatre, has been performing his work and works by guest choreographers including Kyle Abraham, Adrienne Truscott, Sara Rudner, Seán Curran, John Jasperse, and Merce Cunningham since 1991. He is one of the subjects of Sadlers Wells’ 52 Portraits for Jonathan Burrows. He founded Dancer from the Dance Festival of Irish Choreography in New York and Dublin in 2019. He has performed in Meredith Monk’s Quarry and for Yoshiko Chuma, Sarah Rudner, Thomas Lehmen, Adrienne Truscott, and Anna Sokolow, and performs in Oona Doherty’s Hard To Be Soft. Scott is a member of the Irish Artists body, Aosdána. He is delighted to be back at La MaMa.

Recently acknowledged as a 2021 Princess Grace Award recipient in choreography, and nominated for two 2021 Bessie Awards in dance and performance, Johnnie Cruise Mercer is a queer Black think-maker, freelance performer, educator, and social entrepreneur based in New York City. As the company director and lead producer of TheREDprojectNYC, his processes/work has been shared and/or hosted by 92Y Harkness Dance Center, Gibney, Dixon Place, Danspace Project, The Fusebox Festival, BAAD!, Mana Contemporary, La MaMa, Abrons Arts Center, and most recently at The Clarice Performing Arts Center’s The BlackLight Summit. As an educator, Mercer facilitates within the New York Public School system through The Leadership Program - a mentorship-based organization that uses art to foster/engage restorative justice, and motivate the true empowerment of self. Mercer has also been on teaching faculty/a guest artist at the American Dance Festival, Bates Dance Festival, PRATT Institute, NYU Tisch, DeSales University, University of Texas at Austin, Virginia Commonwealth University, The University of Maryland, and Harlem School of the Arts, among others. Mercer is currently on faculty at Sarah Lawrence College. Most recently he has had the honor of being a 2019-2021 Artist in Residence at Brooklyn Arts Exchange, a 2020-2021 Ping Chong and Company Creative Fellow, and a 2020-2021 AIR through New Dance Alliance’s Black Artists Space to Create Residency curated by Angie Pittman. Mercer is currently a 2022 Artist in Residence at Center for Performance Research.

Jesse Zaritt's work engages drawing as dancing—a visual and physical practice linked to dreaming, drafting, and materializing futures. His choreographic, performance, and teaching practices research the ways in which excessive, contemplative and resistive dance practices change how movement arises in the world and how dancing participates in processes of social transformation. A series of solo works made between 2008 and 2020 interrogate attachments to Jewish ritual and community, seeking to queer dominant paradigms of familial/national belonging, religion, gender, and sexuality. Zaritt is an Associate Professor at the University of the Arts (PA) and currently works in creative dialogue with Sara Shelton Mann.

Marina Celander’s Stone She: Space Edition, part of Celander and collaborator Fredrik Söderberg’s pandemic Hallway Jam series, premiered at Estrogenius Festival 2020. She was part of Brooklyn Arts Council and Art in DUMBO’s inaugural Six Foot Platform project in 2021. Celander received the Pan Asian Repertory Theatre’s Red Socks Award in 2014 for her contribution to Asian American theater. In 2016 she was nominated for the Innovation In Performance Award at the Stockholm Fringe Festival.

Pele Bauch is an interdisciplinary choreographer who combines dance with theater and weaves mixed media and set design into unique performances. Her recent work focuses on her journey as a “Hapa Haole” Kanaka Maoli (multiracial Native Hawaiian) navigating her lack of knowledge from her birthright culture. Her next work, The Distance Process/ Dear Kanaloa, is commissioned by Women in Motion. Bauch’s choreography has been selected for presentation at many venues including the Brooklyn Museum of Art, the Chocolate Factory Theater, Danspace Project, Movement Research at the Judson Church, Joyce SoHo, HERE's TALR, Dixon Place, and BAX. She has received residencies from The Joyce Theater, Dance Theater Workshop, the Chocolate Factory, and 92Y Harkness Dance Center. She has received funding from the Lower Manhattan Cultural Council, Brooklyn Arts Council, and Harkness Foundation for Dance. Bauch resides in her hometown, New York City, in the land of the Lenape people. She supports fellow choreographers and artists as a dance dramaturg and Fieldwork facilitator; she has taught dance dramaturgy at Mount Holyoke College and choreography at Movement Research.