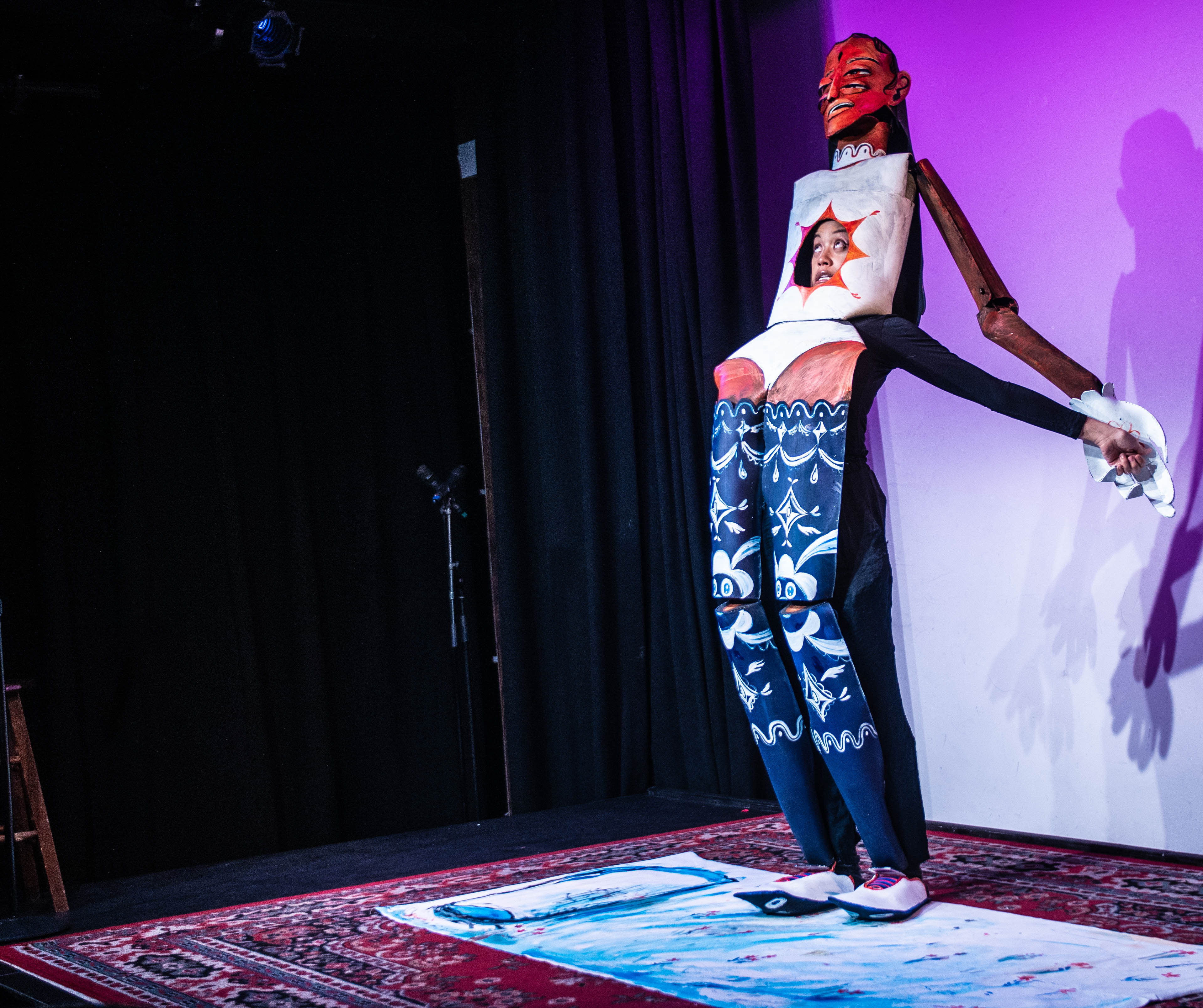 Maria Camia, creator of the MARICAMA brand and universe, is a Filipino American Visual Theatre Artist who creates Spiritual Theater, Visual Art, and Fashion with the intention to globally inspire healing and play. Her transformative storytelling leaves audiences rewired and enlightened to the infinite potential of the MARICAMA mindset. She has performed original work for established theaters including The Henson Company, La Mama, and The International Puppet Fringe Festival. NEW MONY!, her first full length production, was commissioned and presented in NYC by Dixon Place with private funds from The Jim Henson Foundation and The Jerome Foundation.

“Part celestial creature, part sophisticated human” is how Charlotte Lily Gaspard has been described by Faerie Magazine when contemplating the ethereal artist and her work in one of their features. Shadow puppet artist, educator, and children’s entertainer, Charlotte’s mission is to activate imaginations and celebrate playfulness wherever she goes. A “multi-faceted enchantress...the fanciful mastermind behind Midnight Radio Show” (Broadway World), Charlotte is the founder and artistic director of Midnight Radio Show, a shadow puppet sci-fi fairytale theater company based in Brooklyn, NY. She designs puppets for theater and film, including A Snowy Day & Other Stories by Ezra Jack Keats.

Aaron Haskell (He/Him) is a puppeteer, puppet maker, director, designer, actor, dancer, and visual artist living and working in NYC since 2000. Dance: Fellowship at Alvin Ailey American Dance Theater 2000-2001. As a dancer I’ve worked with Suarez Dance Theatre, Physual, Loco7 and Dzul Dance. Notable plays, I Love Paris and Fatal Attraction: a Greek Tragedy. As a puppeteer in War Horse 1st National and International Tour (2012 – 2015), Cirque Du Soleil’s International tour of Toruk: The First Flight (2016 – 2019), UAE 48th NationalDay (2019), Macy’s Thanksgiving Day Parade. My love for puppetry really spawned when I started to work with Loco7 at La MaMa in Bokan: The Bad Hearted (2004- 2006) and most recently in Lunch with Sonia (2021). This was where I really started to gel all the forms of artistry I studied, dance, art, and acting.  I was a builder and designer for 10 years creating some of the specialty props and puppets for Nightmare: NYC’s most Horrifying Haunted House as well as for numerous theatre and film productions including creating puppets for Rhino Leap’s The Tempest in North Carolina (2016), Tori Bend’s The Paper Hat Game (2016) under the name Brooklyn Art Department. Under this name I created and directed, WakeUp, You’re Dead! Presented and produced by La MaMa (2010). Me_irl at the Nightmare Horror play festival in NYC (2016) and most recently with my newly named company, Second Sister Productions I had  year long residency at St. Ann’s Warehouse Puppet Lab where I started developing The Pact (2016), which tells the story of two brother wolves and their impossible survival told through the parable storytelling, puppetry, and live music. I also have done workshops for The Pact at Dixon Place and in Sanya, China. I am also working on an opera, Dream Sequence in which I had a workshop in December 2019 at Dixon Place. I am very excited to be back at La MaMa to continue developing The Pact. Follow all my adventures at AaronHaskell.com and @AaronHaskells (Instagram).

Marcella Murray is a New York-based theater artist from Augusta, Georgia. She is a playwright, performer, collaborator, and puppeteer. Murray’s work is heavily inspired by the observed ways in which people tend to segregate and reconnect. Her work tends to focus on themes of identity within a community and (hopefully) forward momentum in the face of trauma. Performances include Sonntags wird gelogen Or We Only Lie on Sundays written and directed by Leonie Bell at The Brick; The Slow Room, a piece directed by Annie Dorsen at Performance Space New York; a workshop of Ocean Filibuster which was co-created by the team Pearl D’Amour (Lisa D’Amour and Katie Pearl) with composer Sxip Shirey at Abrons Arts Center; I Don’t Want to Interrupt You Guys which was created in collaboration with Leonie Bell and Hyung Seok Jeon during RAP at Mabou Mines; New Mony created by Maria Camia at Dixon Place; and Shoot Don’t Talk at St. Ann’s Warehouse/Puppet Lab created by Andrew Murdock. Along with David Neumann/Advanced Beginner Group, she recently co-created Distances Smaller Than This Are Not Confirmed (Obie Special Citation for Creation and Performance) which opened at Abrons Arts Center, co-produced by Chocolate Factory, in January of 2020. She is also one of four curators of the Object Movement Festival at Center West Park.

Resident artists explore how new works were created, performed, and experienced during a yearlong residency. This edition of Jump Start invites our four 60th Season puppet resident artists (a program funded in part by The Jim Henson Foundation and Cheryl Henson) to showcase a live presentation of their works-in-progress.