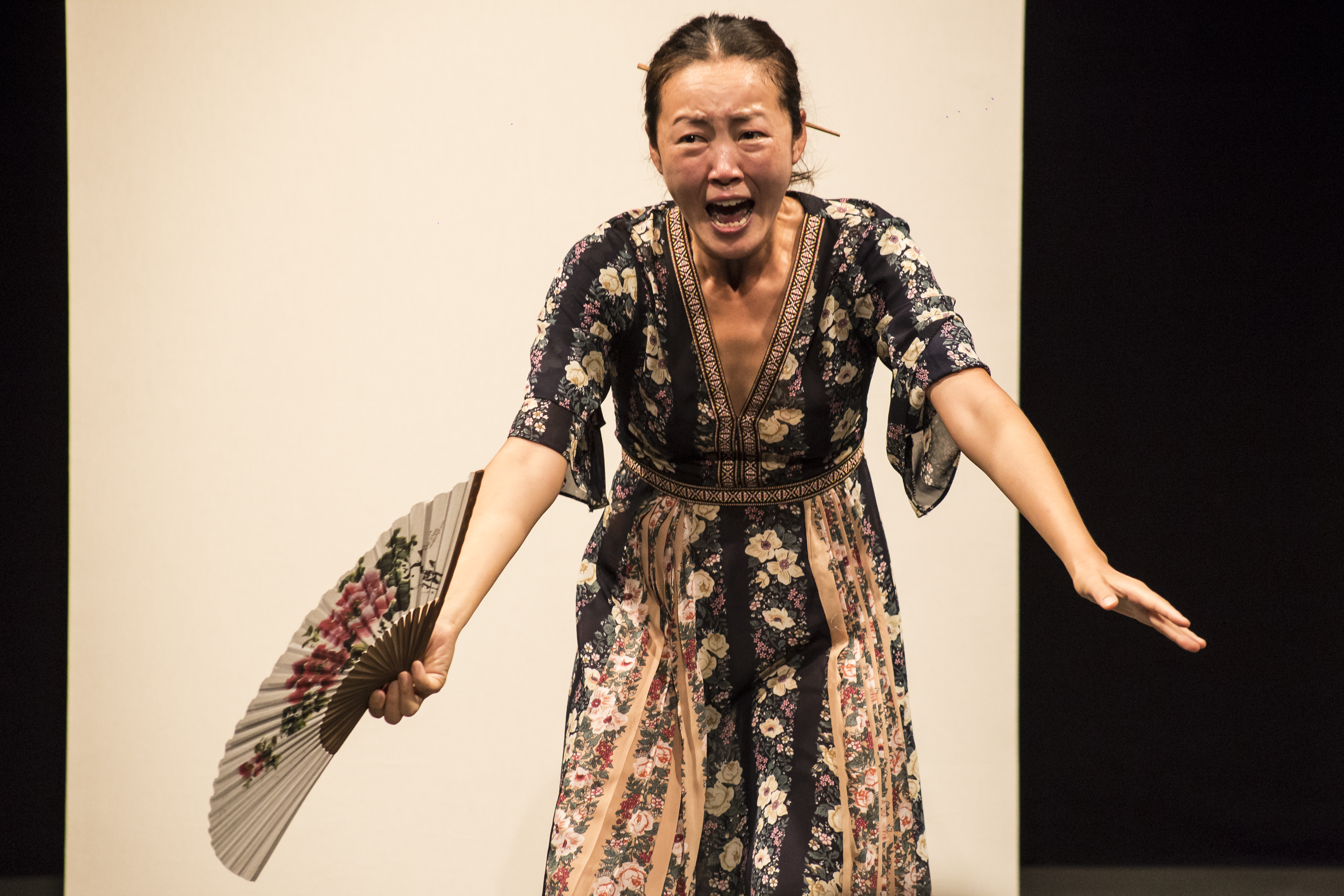 By Theatre No Theatre
Directed by Thomas Richards

The Potential of Song: A Masterclass with Thomas Richards

HAN! is directed by Thomas Richards, theater director and former Artistic Director of the Workcenter of Jerzy Grotowski and Thomas Richards in Pontedera, Italy. There, he began as the protégé and then essential collaborator of famed Polish director and performing arts theorist Jerzy Grotowski, considered to have been one of the greatest reformers of 20th century theater and one of the founders of experimental theater.“[Han] is not an easy word to understand. It has generally been understood as a sort of resentment. But I think it means both sadness and hope at the same time. You can think of Han as the core of life, the pathway leading from birth to death. . .” Park Kyon-ni (1994)

An ancient dance is performed under a neon light. A virgin ghost stares out of the TV. A baby left alone in an apartment meditates on the nature of solitude. A woman explores memories of her life in relation to the Korean concept of Han.Our heroine moves back and forth between the ancient myths of “Gojoseon,” the era of her dead grandmother, her mother’s past and her own life. Three generations of Korean women bound together in the “resilient silence” of Han. How will she navigate the sea of expectations that life, family, and nation have thrown her way? Through her struggle to understand the complexity of her own Han, which ignites a fire in her mind, we are carried into a dynamic meditation that explores the no man’s land that exists between myth and modernity, as we weigh the relation between suffering, sacrifice, and destiny.

The show is in Korean with English subtitles performed by Hyun Ju Baek.

Considered one of the most important and influential theatre practitioners of the 20th century, Jerzy Grotowski revolutionized contemporary theatre. Beginning in 1959 with his early experiments in the Polish town of Opole and later with the Polish Laboratory Theatre in Wroclaw, Grotowski changed the way Western theatre practitioners and performance theorists conceive of the audience/actor relationship, theatre staging, and the craft of acting. This phase of his theatrical work, also called “poor theatre,” was the basis for one of the most influential theatre books of the 20th century: Towards a Poor Theatre (1968). After abandoning the “theatre of productions,” Grotowski continued to push the boundaries of conventional theatre, first in his paratheatrical work, and later in his performance research, which took him to India, Mexico, Haiti, and elsewhere, in search of the traditional performance practices of various cultures (Theatre of Sources, 1976-82). This work led Grotowski to his identification of particular abiding elements of ritual traditions (Objective Drama, 1983-86). In the final phase of his work Grotowski explored the far reaches of the performance continuum, which he traced from “Art as presentation” toward what has been called “Art as Vehicle.”

Hyun Ju Baek was born in South Korea. Her career developed mainly as a musical theatre actress for a decade in Korea. She traveled to London to study theatre directing and earned a master’s degree in Theatre and Performance at Goldsmiths, University of London, UK. Before joining the Workcenter Hyun Ju worked as an actress, director, and playwright in both Seoul and London. She wrote, produced and directed many theatre pieces including: Flatmates V Zombies (Tristan Bates Theatre UK, Camden People’s Theatre UK - a piece that won a fund of the Arts Council of England); The lady of Burma (Moon Light Theatre Korea); Today and (commissioned by Kyunggi Cultural Foundation); The Sound Factory (commissioned by the Pusan Cultural Foundation). In 2017, she participated in the Workcenter’s Master Course, supported by the Korean Arts Council. After attending another pedagogic encounter with Thomas Richards in Hong Kong, she organized a theatre group: The association for Craft and Creative Process GB, and held the Seoul Work Encounter to Korea the Focused Research Team in Art as Vehicle. The following year, she joined the Workcenter’s Focused Research Team in Art as Vehicle.