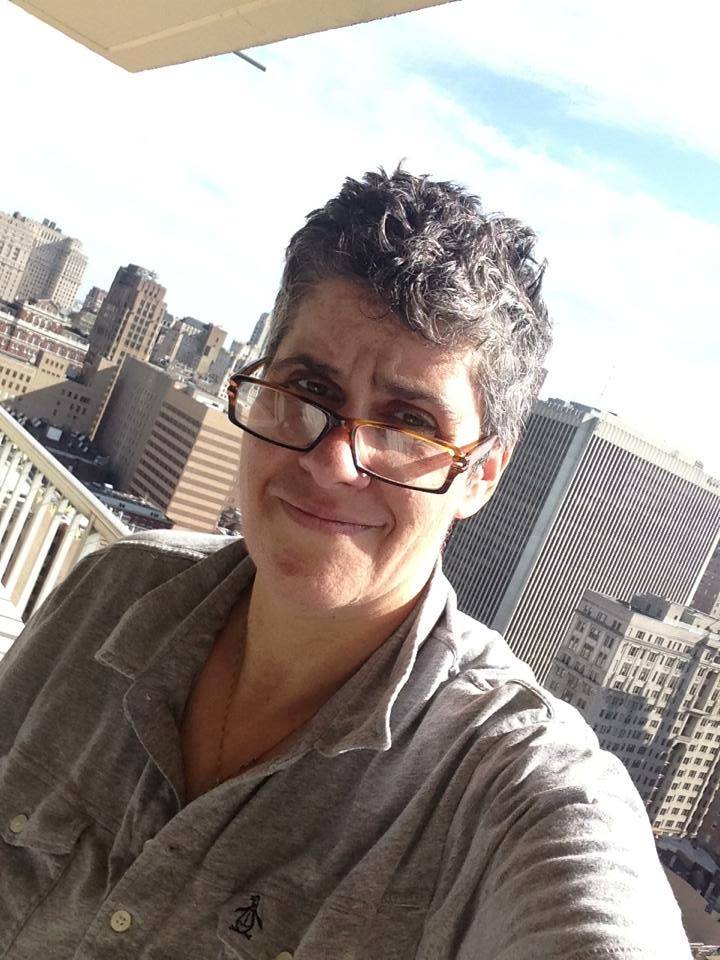 7PM: Waitress at the Red Moon Pizzeria by Eleanor Levine

Waitress at the Red Moon Pizzeria is a performance piece that delves into a 40-year realm of unrequited love. The lover being sought is enamored of the pursuer for 30 years while they are in high school, college and adulthood. They share many of the same qualities: addiction, lesbianism, motherhood, angst, mental health issues, writing and artistic talents, and many friends and mentors who equally despise and love them. Eventually, the women enter into a heated relationship in their fifties that turns tragic and drenched with indescribable moments of amusement and devastation. Combining her soon-to-be-published poetry collection, Waitress at the Red Moon Pizzeria (Unsolicited Press, Davis, CA, March 2016), Eleanor Levine also includes short stories and new prose to recount this exquisite and painful journey.
Eleanor Levine‘s writing has appeared in Fiction, Evergreen Review, Fiction Southeast, Dos Passos Review, Monkeybicycle, Barely South Review, The Denver Quarterly, Pank, The Toronto Quarterly, Barrelhouse, Intima, Foliate Oak Literary Magazine, Kentucky Review, Juked, The Stockholm Review of Literature, Crack the Spine, Thrice Fiction, Tulane Review and The MacGuffin; forthcoming work in SRPR (Spoon River Poetry Review) and Hobart. Her short story, “The Jew Who Became a Nun,” was nominated by Menacing Hedge for Best of the Net 2015. Levine’s poetry collection, Waitress at the Red Moon Pizzeria, will be released by Unsolicited Press (Davis, CA) in 2016. She has performed her work at The Knitting Factory, La Mama Galleria, CBGB’s, Columbia University, New York University, and numerous venues in New York, Virginia, New Jersey, Massachusetts, Pennsylvania and Paris, France. She is a medical copy editor and lives with her dog in Philadelphia, PA.

In 2013, queer writer and performer Sarah Duncan started to feel sick — but after finding no answers, eventually decided to grin and bear it. But now, three years later in 2016, she’s found herself much, much sicker — and with quite what, she still couldn’t tell you. And in fact, neither, so far, can her doctors. What does a person do when their body starts hurting in ways that can’t be fully explained, and doesn’t stop? What keeps (and strengthens!) people navigating the medical system, juggling doctor’s bills, getting through work days, trying to keep social plans, and still caring for aching, mysterious, mortal, magnificent bodies? In this short show mixing poetry, prose, and performance, Sarah examines how to bear hard things that just don’t go away.

Sarah M. Duncan originally hails from Normal, Illinois (really). She is a queer multidisciplinary writer, performer, educator, troublemaker, and arts organizer. Her poetry has been published by Ghost House Review, Souvenir Lit Journal, and this spring, Pelorus Press. Sarah performs in and curates poetry events around NYC, and her most recent play “Come Back Up” was recently produced this past August by Sanguine Theater Company. She is currently collaborating on a visual poetry project with French artist Anne de Beauford. She believes (almost) absolutely everything is invented. www.sarahmduncan.com

9PM: Devil In A Box by Sarah Jane Johnson

The summer of a lifetime for a small town girl from Nebraska, a chance to study overseas, changes the trajectory of her life forever.  A weekend in Paris with friends that ends before it begins, a young woman finds herself in a hospital, an empty shell of who she used to be.  After days spent with police and detectives, her assailant jailed, she begins the next chapter of her life: the trial of her rapist.

Sarah Jane Johnson recently performed Devil in a Box at the Wild Project, produced by All For One. She first began developing Devil in a Box at Stage Left Studio in New York City, Out North Contemporary Art House in Anchorage, and Bunnell Street Art Center in Homer, Alaska. Sarah Jane, and the creation process of DIAB, is featured in New York City filmmaker Karin Anderson’s, UNAFRAID, a documentary that interweaves the real stories of rape survivors with expert interviews to give greater voice to the crisis of sexual assault. As a professional actor, she has worked at regional theatres across the country including the Colorado Shakespeare Festival, Swine Palace Productions in Baton Rouge, and the Depot Theatre in New York. She received her MFA from Louisiana State University. Sarah Jane created Transforming Trauma, a writing and storytelling workshop for survivors of domestic violence and sexual assault, providing a pathway for each survivor to move forward through their trauma.  She is Chief of Staff for the Peabody award-winning, The Moth.

Marilyn Torres hails from Harlem, New York. She’s graced the stage in plays such as Water By The Spoonful at The Old Globe, Breath Boom at Yale Rep, Agony of the Agony at The Vineyard, BikeAmerica at The Alliance Theater and Ma-Yi Theater. Film credits include Maid in Manhattan, Lady in the Water, Bella, Bernard & Doris, The Arrangement, Musical Chairs and Home. She’s had principle roles on Law & Order, Law & Order SVU, The Unusuals, Flight of the Concord, Third Watch and The Chris Rock Show. Ms. Torres was also part of The Downtown Plays produced by Robert Dinero. She is recipient of The HBO Comedy Arts Jury Award for the theater piece, Late Night, Early Morning. Marilyn has written solo shows called I Have Something to Say and Unzipped. Her monologues have been featured on ShowTime at the Apollo and HBO Latino Campaign. When not acting, Ms. Torres serves as a teaching artist in New York City. She can next be seen on Netflix’s Dare Devil.

A biographical, magical, storytelling experience. A time capsule of memories, secrets and most precious experiences of, The Belman sisters. Three sisters, who immigrate to America from the U.S.S.R before and after Perestroika.Their memories left behind— implanted in pockets and shelves of their brains, burned into memories of photos they set on fire, and smuggled in their hearts their new homes, with Soviet trinkets and recipes they passed down to their grandchildren. Intimate winks and glimpses of their past lives wander as they reinvent themselves in America.The stories are interwoven with breaks of dance and music at any moment, when words can no longer express emotion and time stops.

Growing up on both sides of the George Washington Bridge, she works bi-coastally and internationally, maintaining projects and collaborations worldwide from New York City to Los Angeles and Europe. Sandy’s writing, choreography and devised work has been shared and performed nationally at The Guthrie Theater(TIME SENSITIVE Directed by Marcela Lorca), The California Institute of the Arts, and Highways Performance Space, and Internationally at The Au Brana Cultural Centre and The Edinburgh Fringe Festival.