Saturday at 12PM and 7PM

The program, directed by Virlana Tkacz, will include the traditional Hutsul koliada and an 18th century Ukrainian Nativity play, as well as winter songs from around our planet. The musical director of the show is bandurist Julian Kytasty. Performers will include actors of Yara Arts Group and members of Nova Opera from Kyiv.

The set is by Watoku Ueno. Lights are by Jeff Nash and costumes are by Keiko Obremski. Featured artists in the production include: Yara’s Marina Celander, Darien Fiorino, Chris Ignacio, Akiko Kiuchi, Tatyana Kot, Max Lozynskyj and the musicians of Nova Opera.

Featured musicians will include the Koliadnyky, who will sing traditional winter songs and perform brilliant troista instrumental music from the Carpathians. The Koliada ritual coincides with Christmas but is much older in origin and symbolism. Its oldest songs are preserved in villages high in the mountains. The evening will feature a variety of unique instruments played by the Koliadnyky. The trembita is a Carpathian mountain horn made of a hollowed pine tree that has been struck by lightning and wrapped in birch bark. The fiddle is played in the Carpathian style. The musicians also play the duda, a bag pipe made from a goat, the tsymbaly, a hammer dulcimer, and a variety of hand-made Carpathian flutes including the tylynka. 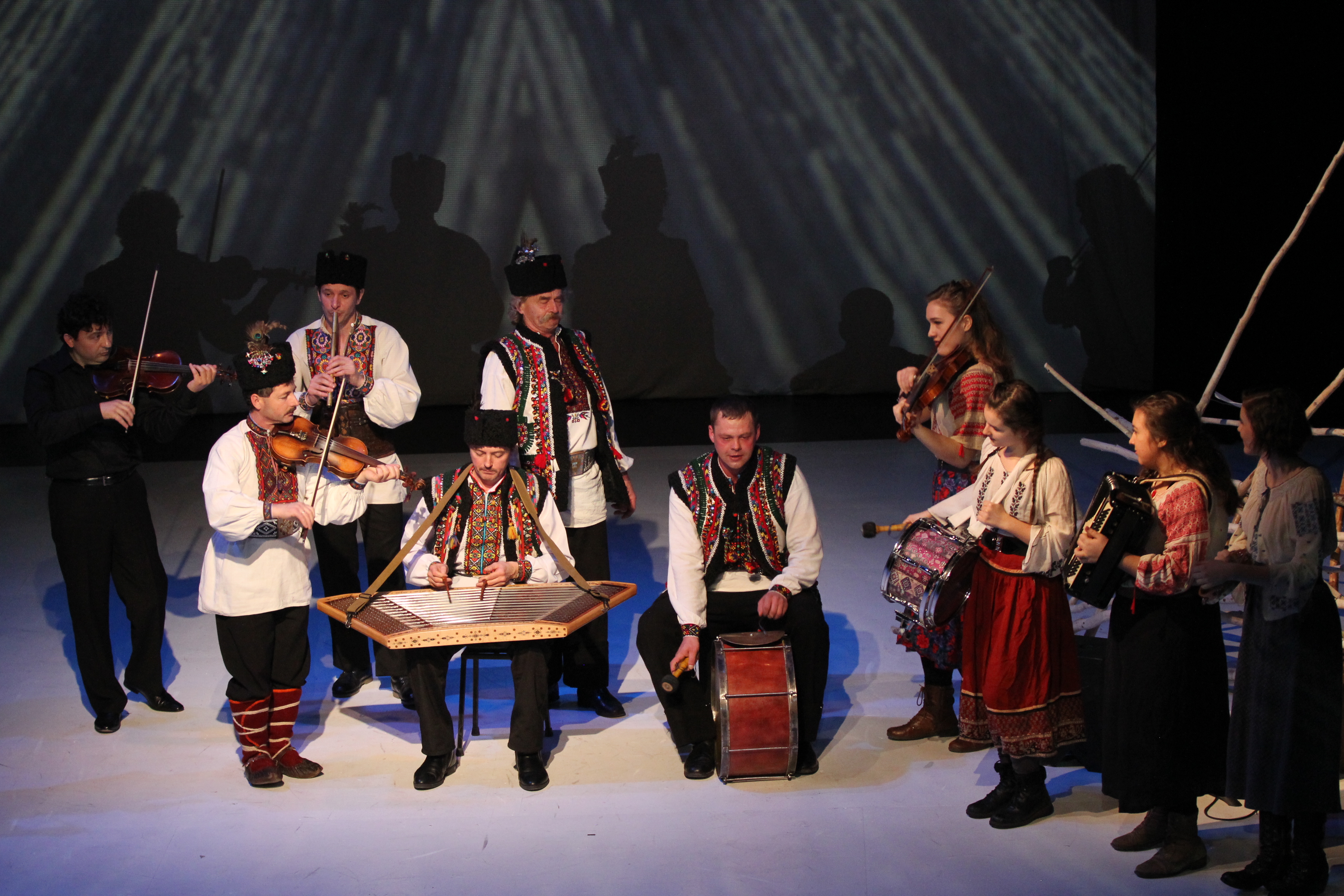 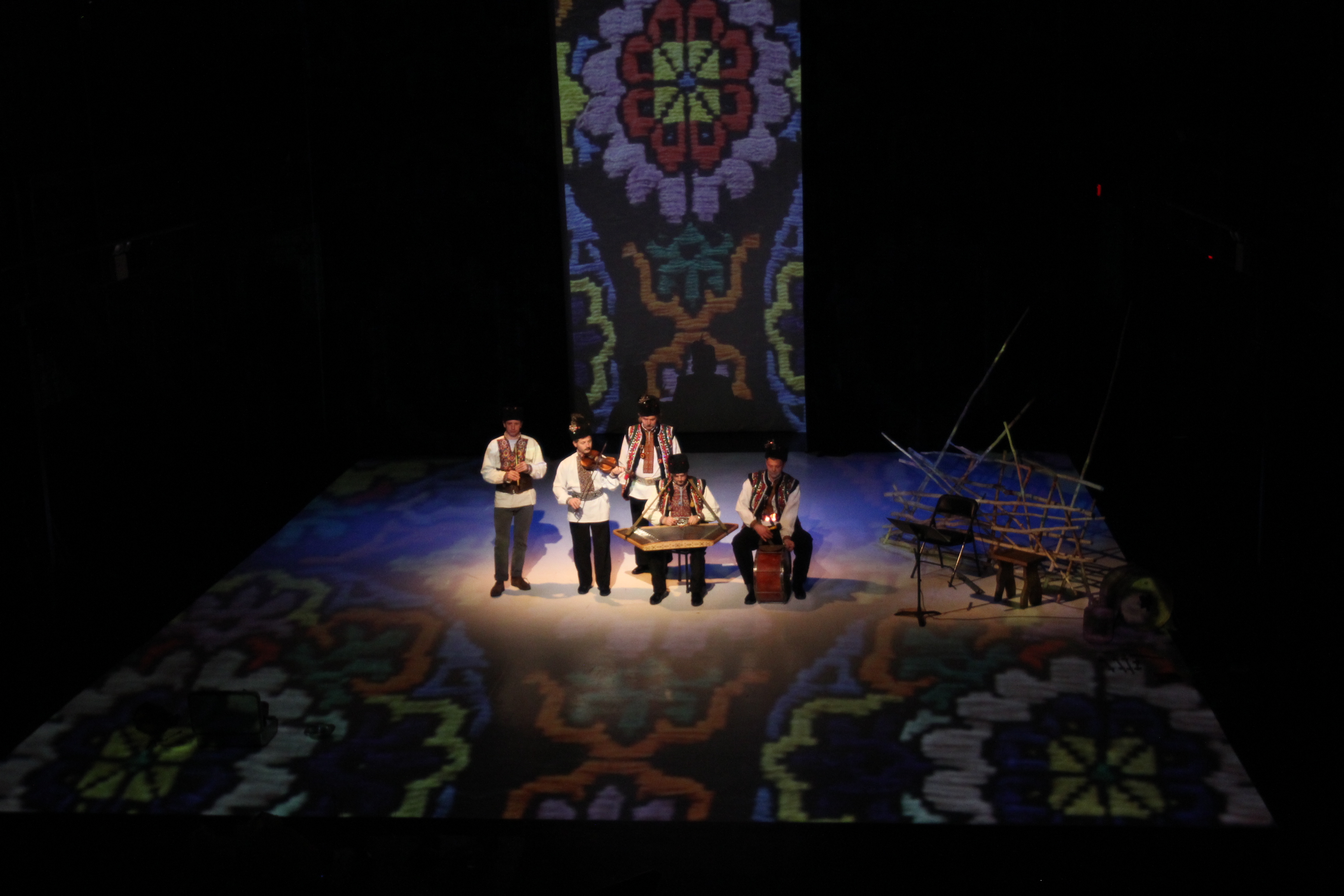 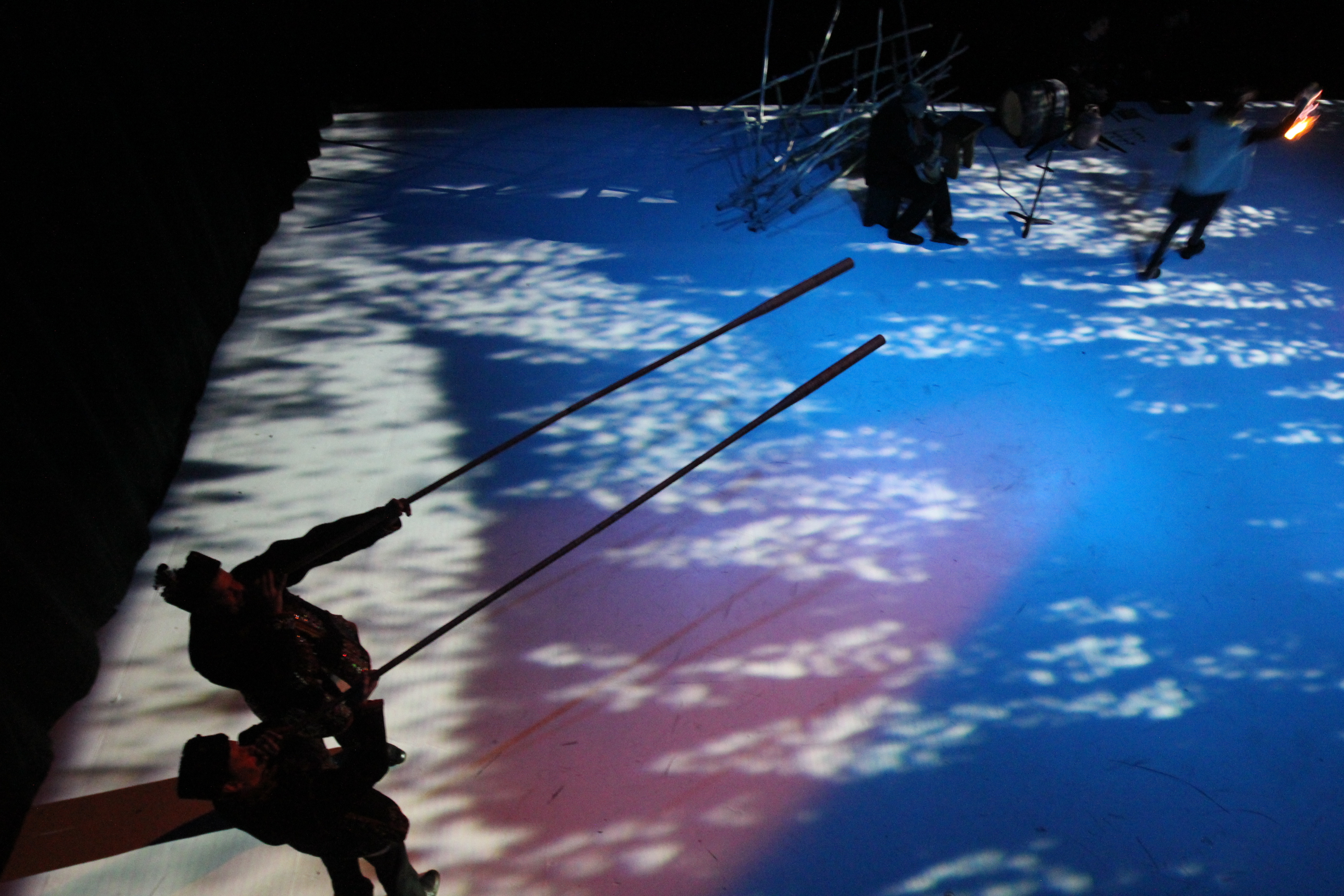 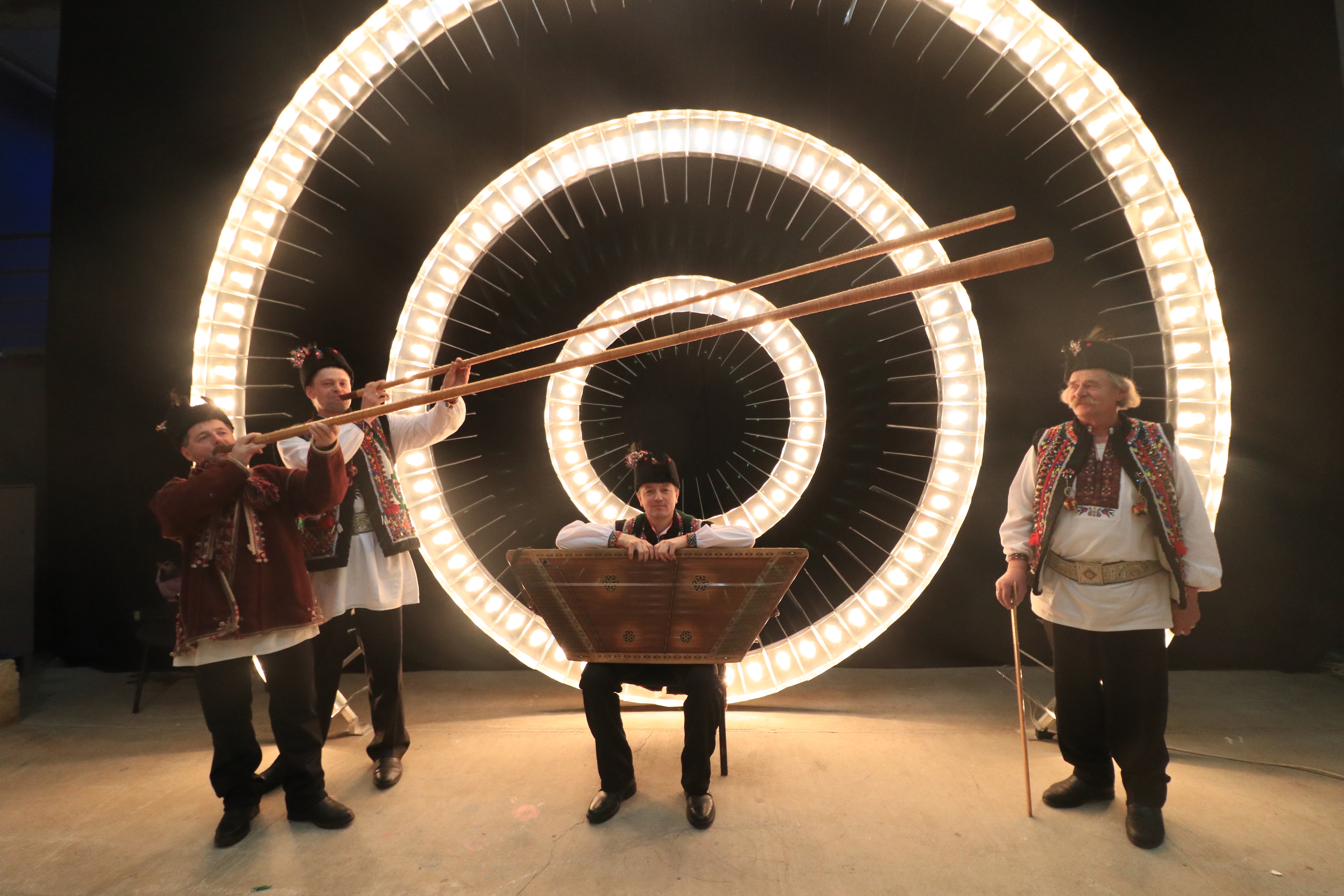 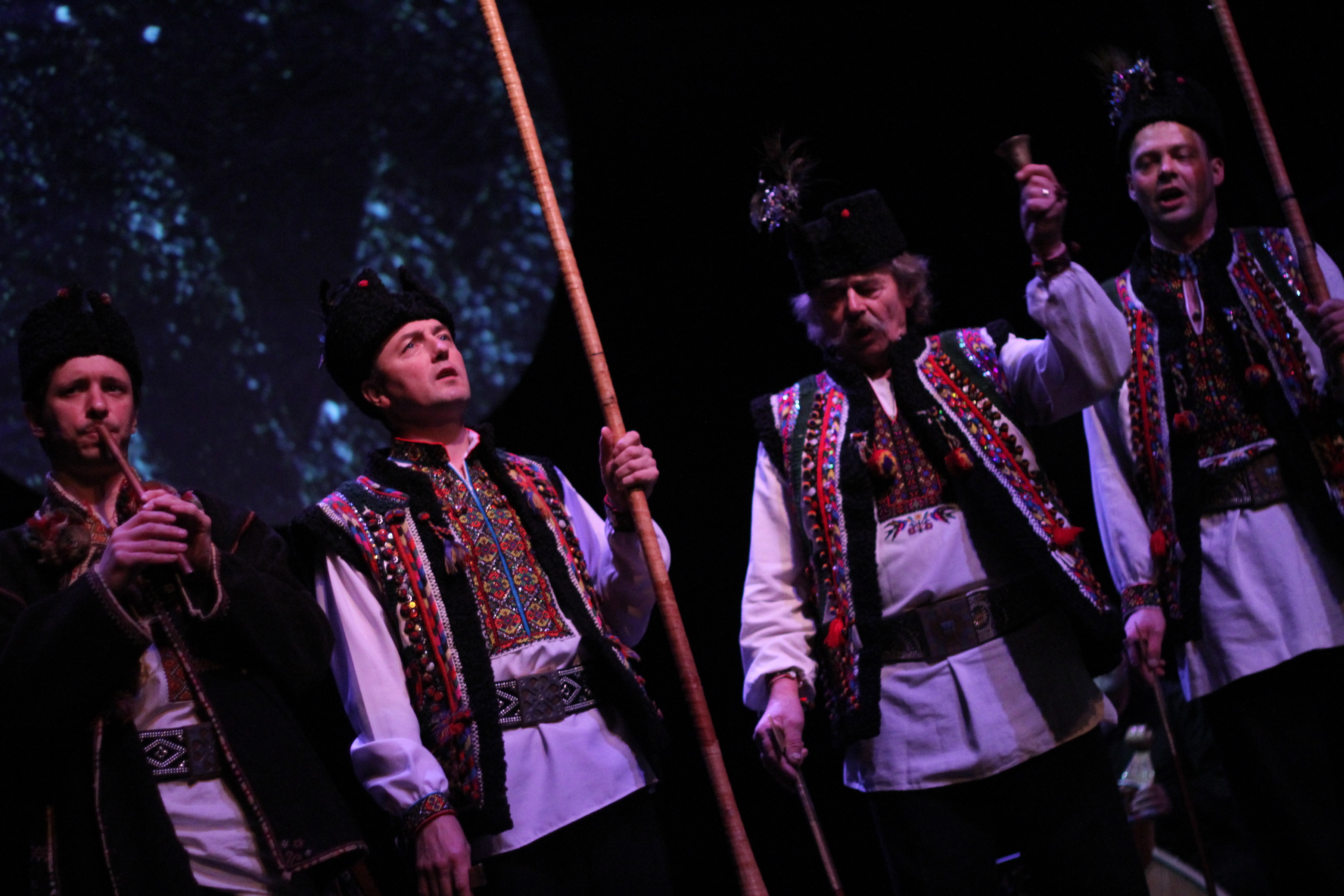 IVAN ZELENCHUK, is the “bereza,” lead singer and leader of the Koliadnyky. He comes from an old Kryvorivnia family and was the village head, as well as the best known winter song singer. He is the son of Ivan Zelenchuk whose handwritten notebook of winter songs helped preserve this tradition for future generations, despite intense persecution for over fifty years of Soviet rule. Now in his sixties, Ivan considers his involvement in the koliada his personal mission. He met the members of Yara when they first visited the village in 2002 and took part in Yara’s Koliada shows in Kyiv, Kharkiv New York, Philadelphia, Washington, San Francisco and Saratoga Springs.

MYKOLA ZELENCHUK, the son of Ivan, proudly carries on the tradition of his forefathers, both as a winter song singer and the best trembita(mountain long horn) player in the village. He also makes the traditional costumes for the winter song singers. He has taken part in Yara productions and was featured in Still the River Flows, Winter Sun, Midwinter Night and Winter Light in New York at La MaMa.

MYKOLA ILYUK is a master Carpathian fiddler and plays most of the traditional instruments, including the duda (bag pipes) and the trembita. He is the director of the renowned Hutsul Instrumental Ensemble and has his own museum of musical instruments. He was the master fiddler for Yara’s Winter Sun, Midwinter Night, Winter Light and Koliada events. He helped create the music for Yara’s show with Shumka Dancers in Edmonton Alberta.
VASYL TYMCHUK plays the tsymbaly (hammer dulcimer) and other Hutsul instruments. He has been part of the Koliadnyky (winter song singers) since 1991 and has worked with Yara since 2010.

OSTAP KOSTYUK plays and makes many of the Hutsul wind instruments, such as the trembita, telynka, floyarka, and dentsivka, as well as the duda (bag pipes). He represents the newest generation that has become expert in this ancient tradition. He was featured in Yara’s Winter Sun, Midwinter Night, Winter Light and performed in Yara’s Koliada events in New York, Toronto, and San Francisco.

YARA ARTS GROUP began its collaboration with traditional artists from the Carpathians in 1995. Yara’s Koliada project was initiated in 2003, and has developed into performances in Kyiv, New York, Philadelphia, Washington, SanFrancisco and Saratoga Springs, as well as productions Koliada: Twelve Dishes, Still the River Flows, Winter Sun, Midwinter Night, and Winter Light at La MaMa Experimental Theatre in New York. Photographs of the koliada ritual in the village of Kryvorivnia have been exhibited at RA Gallery in Kiev, La Galleria and Ukrainian Institute in New York, Spring Street Gallery in Saratoga Springs and as part of a major art installation at the Ukrainian Museum in New York. Find out more at www.yaraartsgroup.net