Sarah Anderson: To fill a Gap/ Insert the Thing that caused it 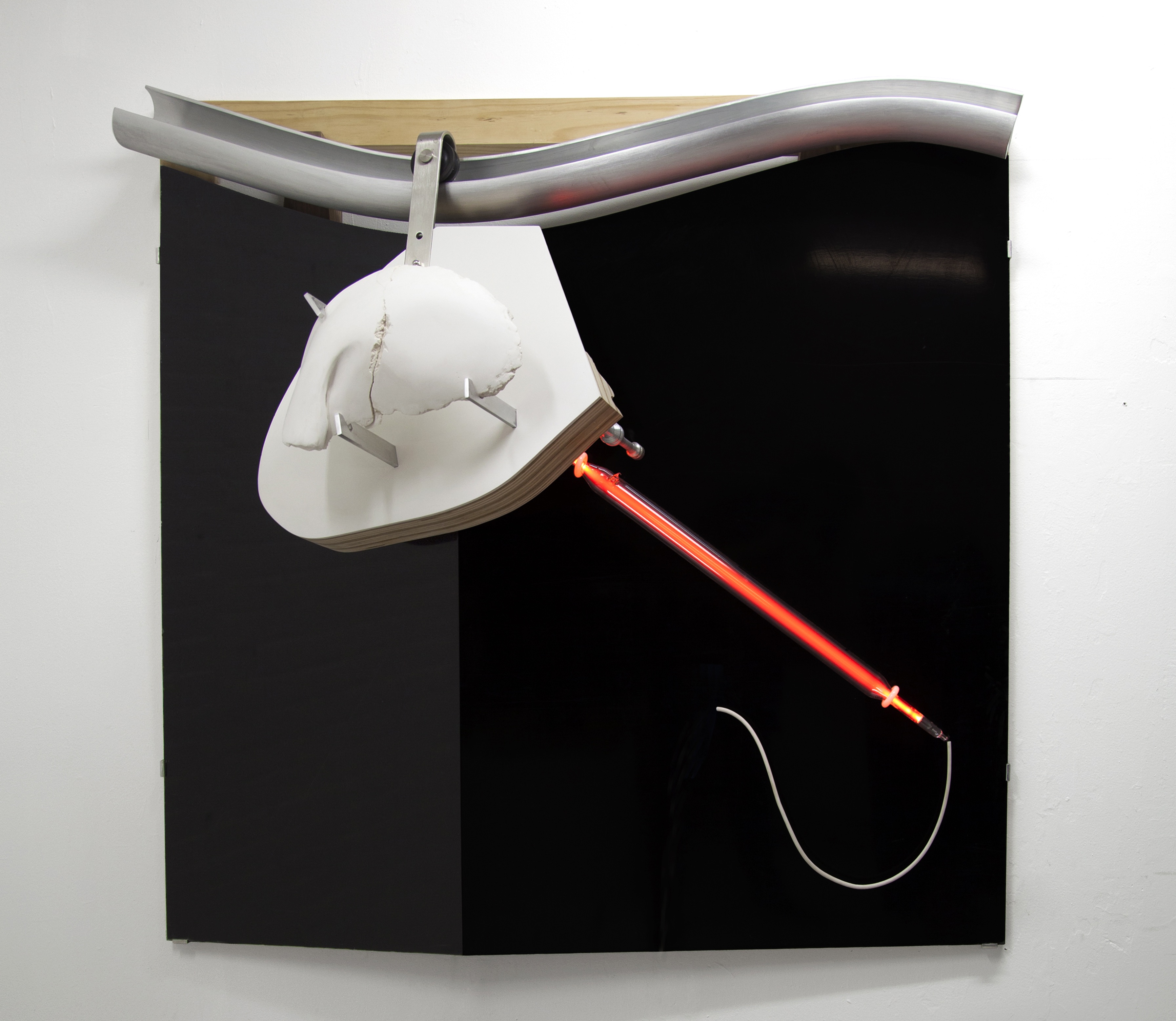 Closing reception: Saturday, May 14 from 6–8pm

To fill a Gap/Insert the Thing that caused it ←

To fill a Gap
Insert the Thing that caused it—
Block it up
With Other—and ’twill yawn the more—
You cannot solder an Abyss
With Air.

Like the Emily Dickinson poem from which this show takes its name, Sarah Anderson’s new works are about the itch of totalizing desire, the frustrations of false fulfillment, and the queerly generative process of piecing together an always lost or incomplete whole. Hijacking systems like minimalism and museology, and deploying the techniques of traditional crafts, Anderson tells stories about the resistance and oppression of desiring bodies in their encounter with the often hostile world around them.

Anchoring the exhibition are two significant new series of sculptural works. In multiple wall-hanging assemblages drawn from an ongoing exploratory practice called Project Total Yang, Anderson combines architectural cladding, sculptural fragments, carved wood, neon lights, plastered medical coolers, and industrial hardware. The sculptural fragments affixed to the works once belonged to a massive realist rendering by Anderson of the imagined head of the woman in Gustave Courbet’s notorious painting, L’Origine du monde (1866). This formerly intact plaster sculpture was violently and mysteriously destroyed upon its initial public display, as though in censorship or denial of the orgasmic pleasure expressed on the female figure’s face. The fragments, which now resemble abstract forms, have been mounted and recontextualized alongside other elements from former works that the artist has intentionally dismantled. In assembling these works, Anderson makes use of museum display techniques, while simultaneously striving to unsettle received ideas about objectal wholeness and material coherence. This aspect of her work constitutes an interrogation into conservation and museum display practices that have been historically informed by colonial, patriarchal, and ableist perspectives.

Project Total Yang borrows its title from the whimsical notion, voiced by a character in David Foster Wallace’s fiction, that one way of resolving the Self/Other problem of existence is to pursue the minimization of Other by maximizing Self. In the wall-hanging sculptures described above, and in other works from the ongoing project, Anderson posits artistic cannibalism as a form of personal and creative evolution. The gap to be filled, here, is caused by the initial dismantling of earlier works, which are then recombined and incorporated with a growing array of materials and repurposed found objects.

A parallel series of sculptural works, On my volcano grows the grass, performs the queer body as a dormant volcano turned active, or an active volcano that is not erupting but is expected to erupt again.The wheeled sculptures are mounted with fresco objects, as well as with images of erupting volcanoes, Pompeian frescoes, and submission wrestling erotica. The works position the immediacy and impulsiveness of desire in relation to the more expansive notions of time invoked by volcanic activity and the preserved remains of Pompeii. The inflamed ridges of the frescoes and fiery openings of the volcanoes are suggestive of erogenous zones. Their tiered arrangement conjures the distribution and multilayered experience of bodily sensation. At the same time, however, the intermittently active volcano, with its multimillion-year lifespan, conjures a world beyond anthropocentric concerns. For Anderson, the ability to think of objects and entities outside of their immediate human usage is an essential basis for confronting wide scale crises like environmental ecocide.

Complimenting these two projects are a number of paintings based on images of Mount Saint Helens, which unexpectedly erupted in 1980 causing dozens of deaths and millions in damage, while provoking a surge of popular and scientific interest in volcanology. The show also features a series of smaller, loosely figurative carved wood sculptures mounted on plastered medical coolers. Both the wood and the medical coolers are sourced from workshops and businesses surrounding the artist’s DUMBO studio. These two sets of work showcase Anderson’s skills as a craftsperson working across different mediums. The sculptures, in particular, exemplify her practice of repurposing found objects, constraining the amount of new fabrication she undertakes, and working with wood finishes and a limited color palette. Together, the works extend the artist’s investigation into bodily sensation, queer subjectivity, and cataclysmic destruction as a site of fascination and paradoxical genesis.

1. General View
To fill a Gap / Insert the Thing that caused it ←
Sarah Anderson
La MaMa Galleria
April 21 - May 14

4. There is no point in knowing what you want (Detail) 2022
Wood, dibond, aluminum, neon, plastic gears, rubber cord, walnut cleats, casters; THE HEAD fragment: plaster and foam
51 x 51 x 17 in

5 . There is no point in knowing what you want 2022
Wood, dibond, aluminum, neon, plastic gears, rubber cord, walnut cleats, casters; THE HEAD fragment: plaster and foam
51 x 51 x 17 in

6. General View
To fill a Gap / Insert the Thing that caused it ←
Sarah Anderson
La MaMa Galleria
April 21 - May 14 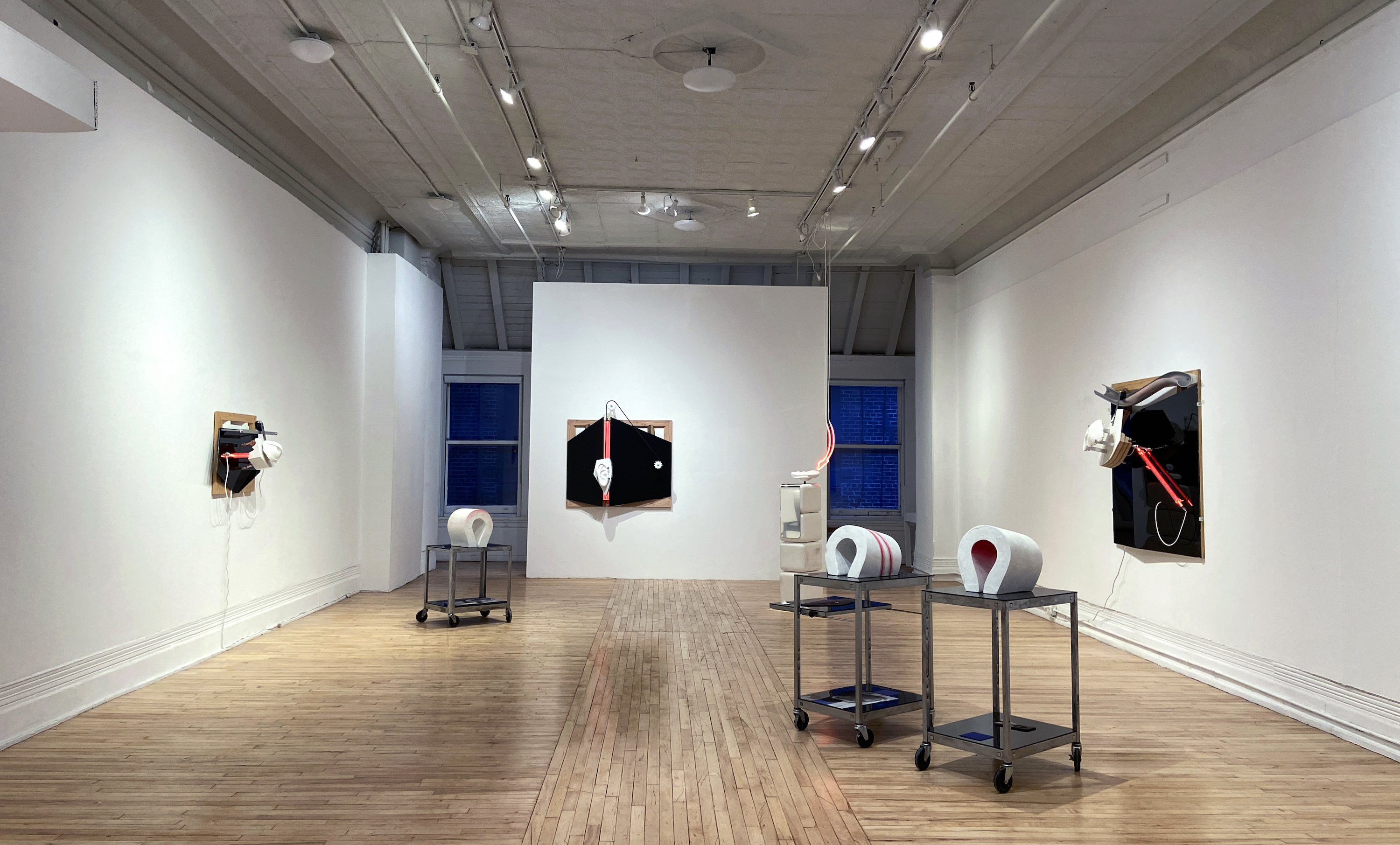 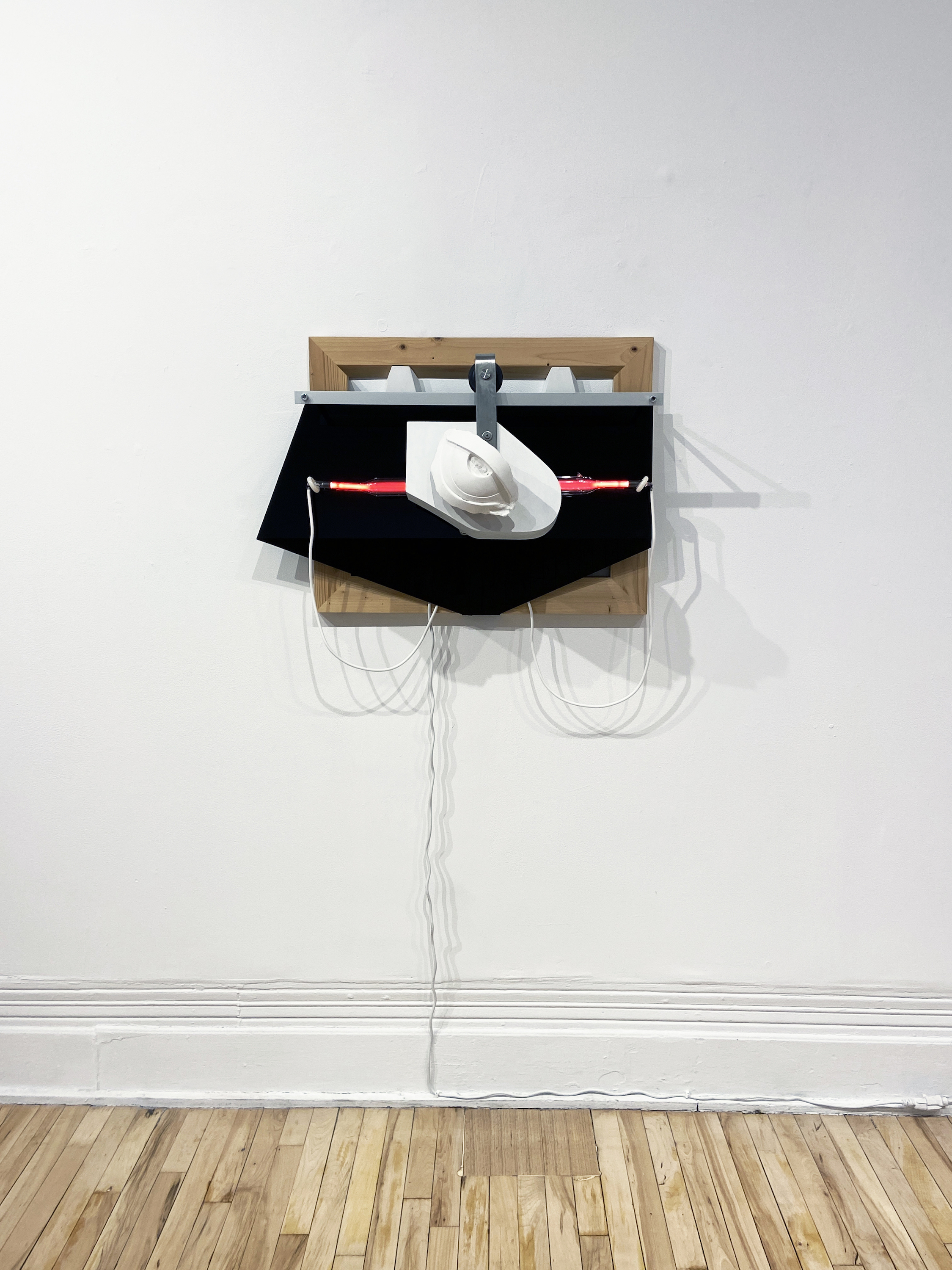 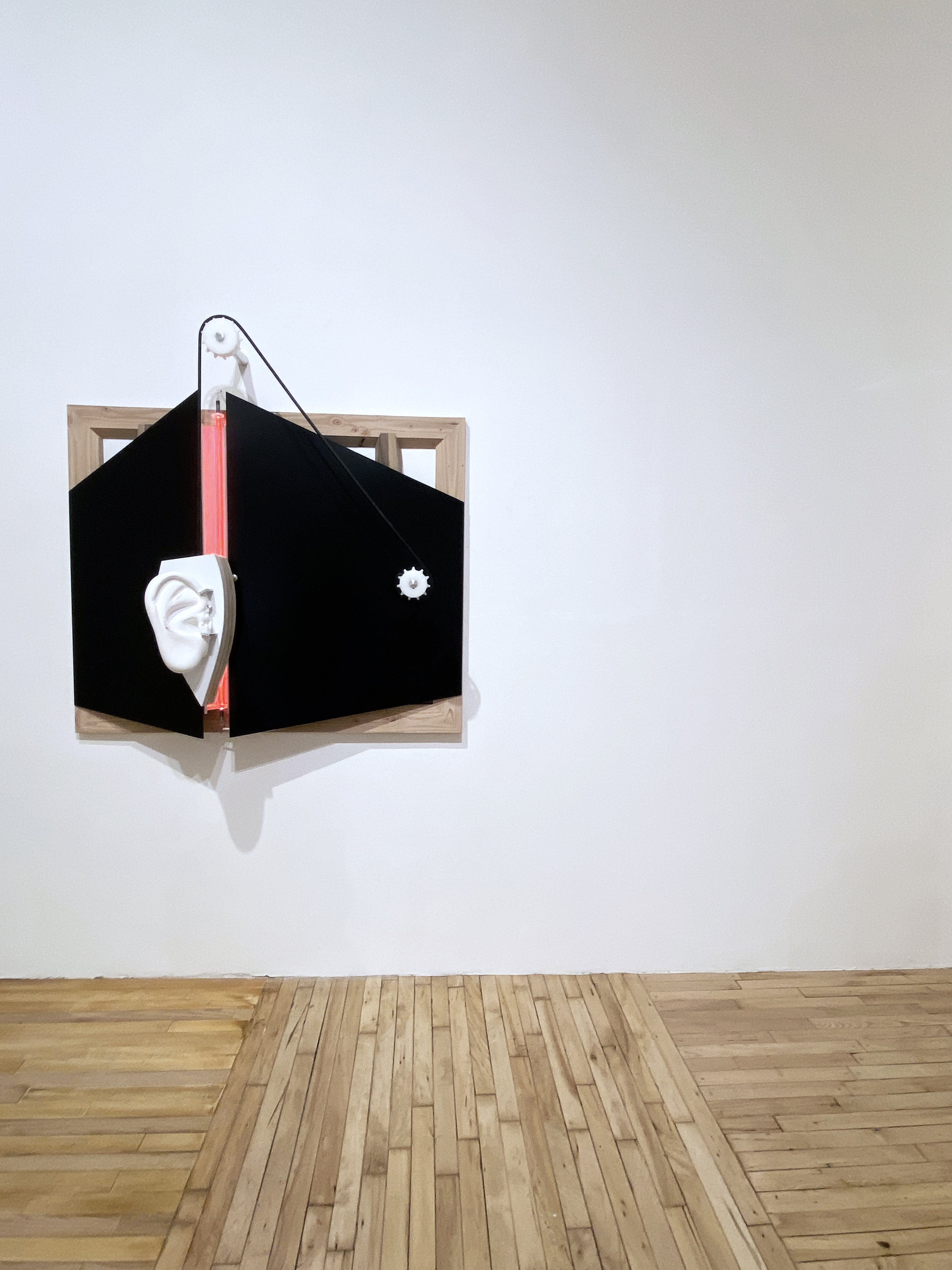 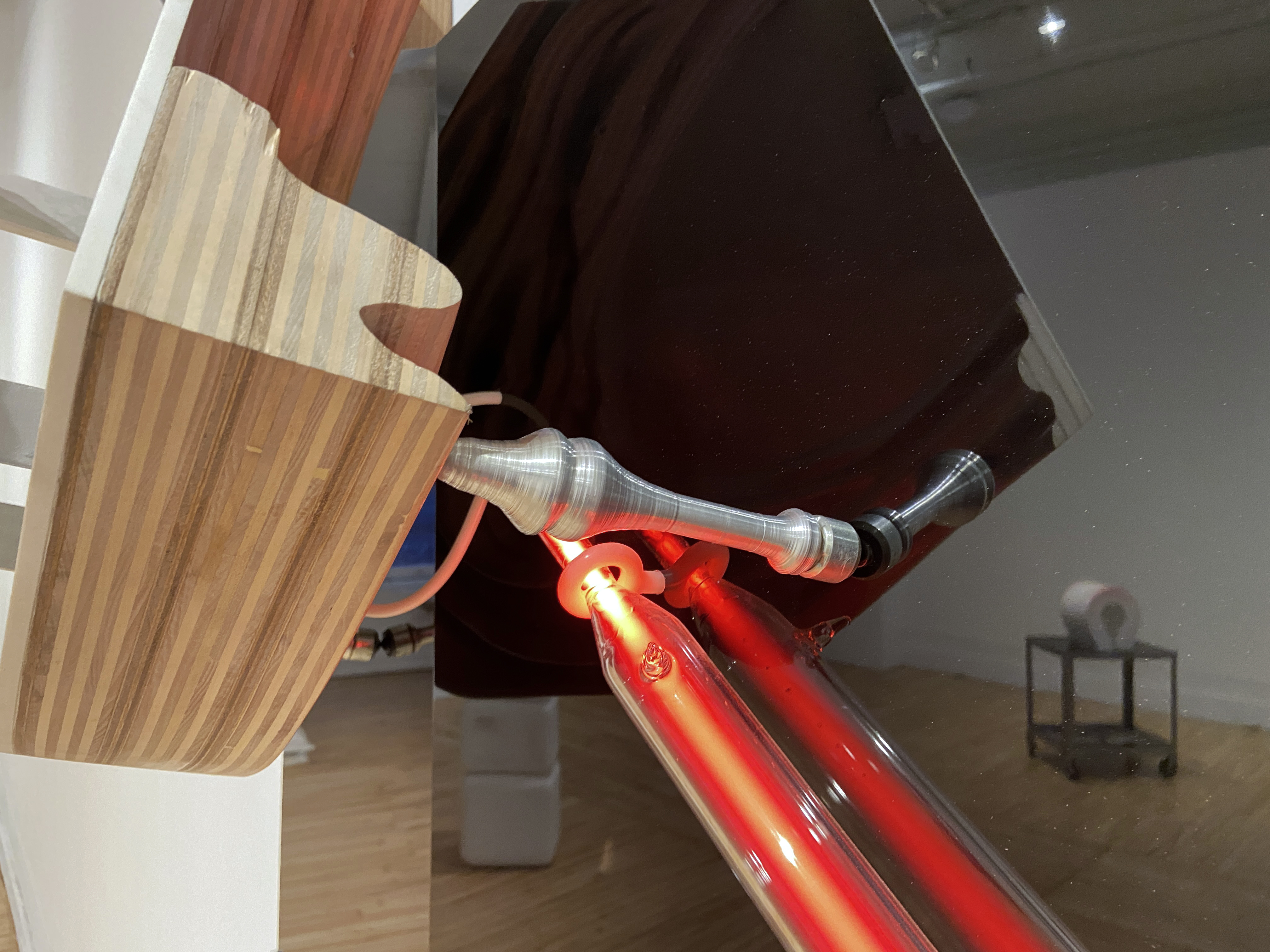 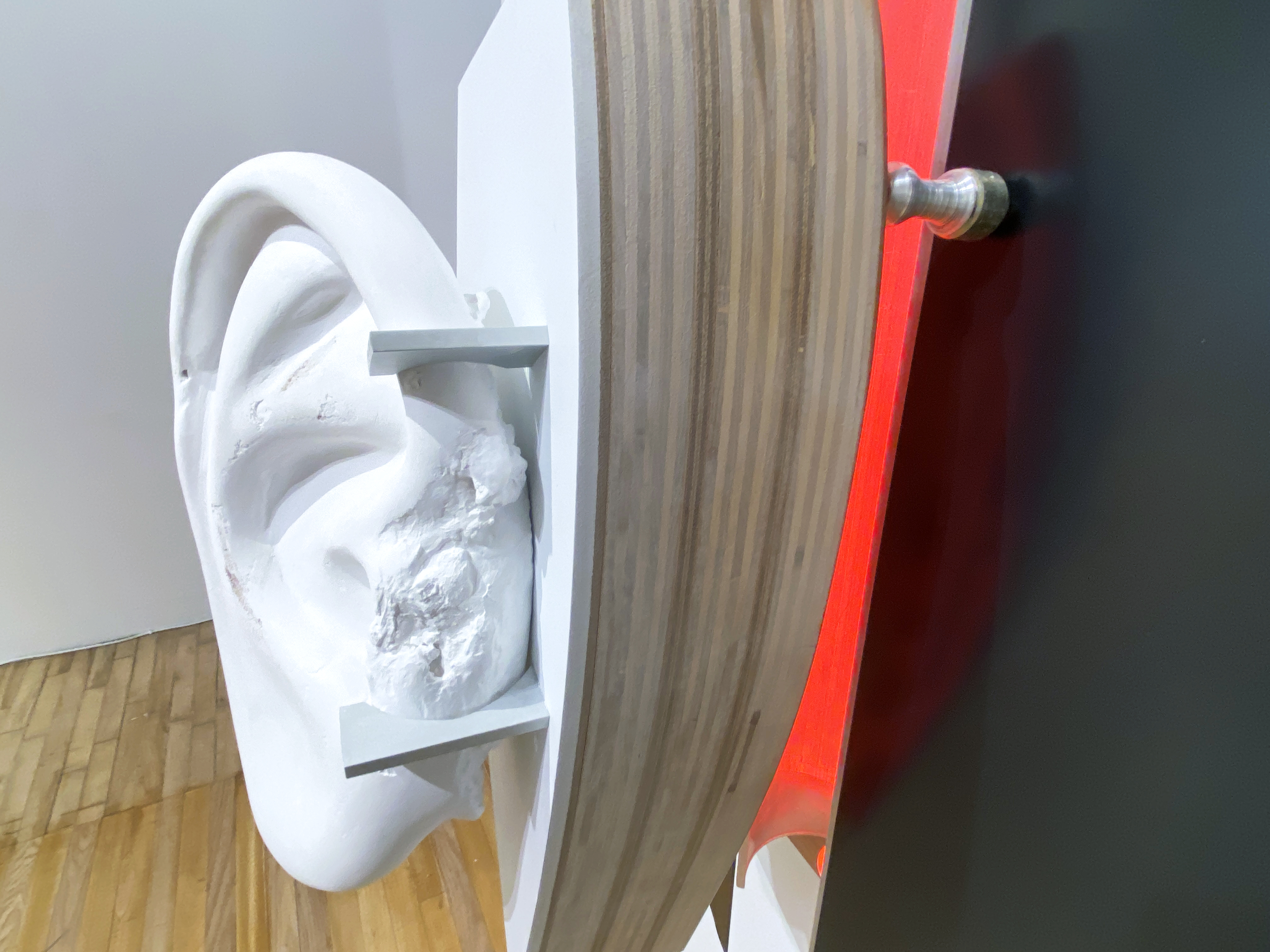 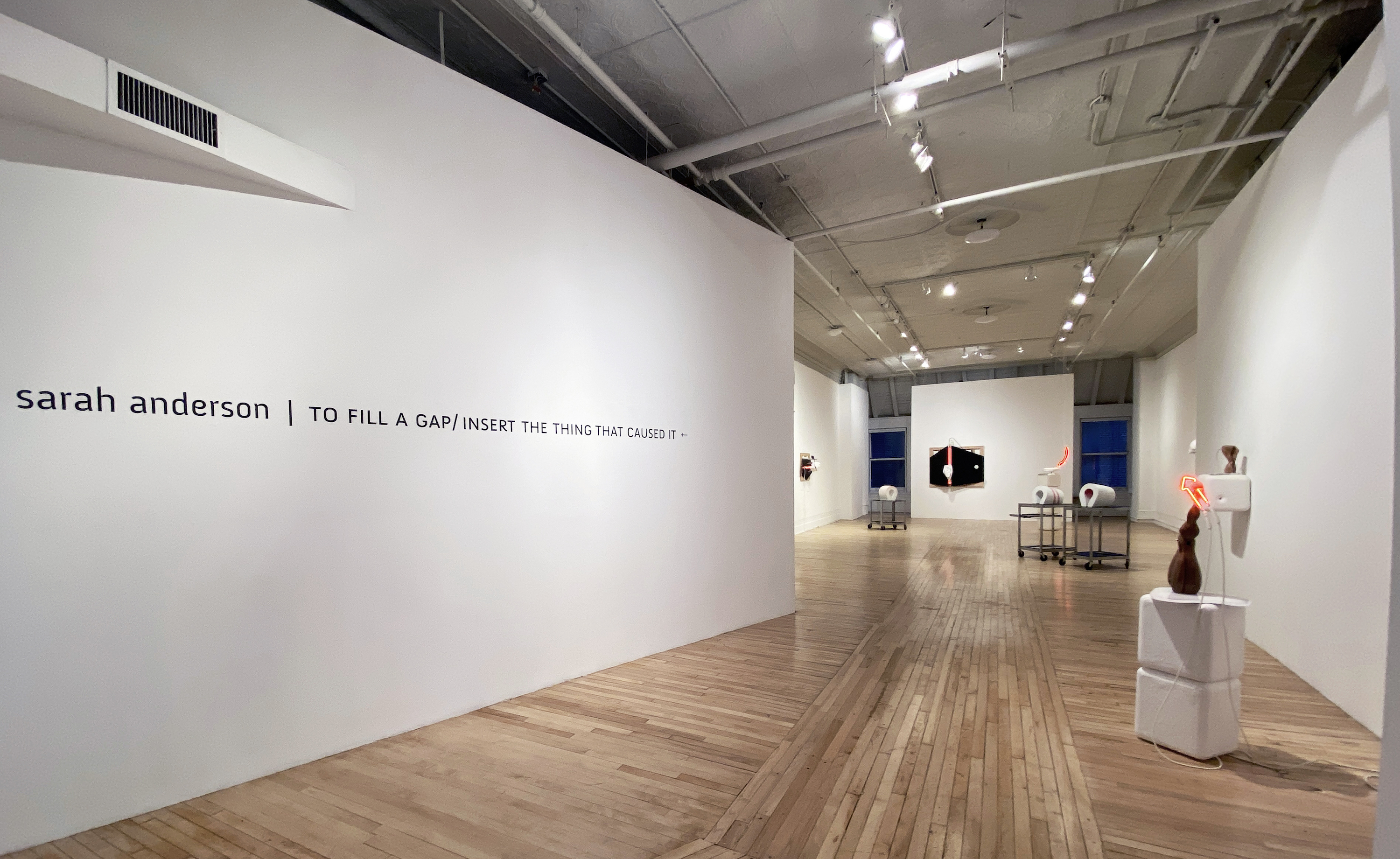 Sarah is a Brooklyn-based artist. She holds a BFA in Glass from Rhode Island School of Design and an MFA from the University of Pennsylvania. She has attended residencies internationally, including Skowhegan School of Painting and Sculpture (Maine), Lower Manhattan Cultural Council Workspace (New York), A.I.R. (Brooklyn), Mana Contemporary BSMT (Jersey City), La Escuelita (Nicaragua), and CanSerrat (Barcelona). Her work has been exhibited at galleries institutions such as Abrons Art Center, NURTUREart, Helena Anrather Gallery, A.I.R, White Box, and Vox Populi.