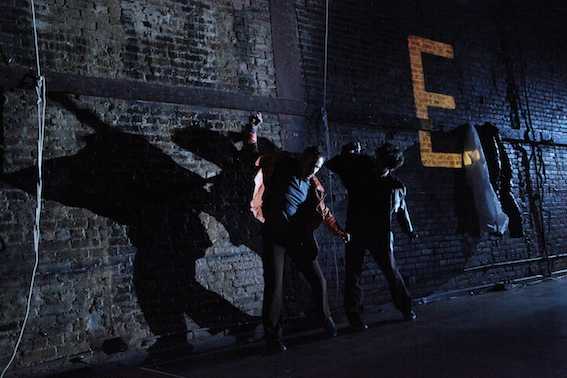 Thursday and Friday at 10pm

“B” as in Becoming or the constant transformation of someone or something.
“E” as in Events. Work created from the assembly of re-contextualized shorter events, resulting in a unique and final whole.

Both works are still in the making, the process having already started in 2015. They are part of a larger project by Jeremy Nelson and Luis Lara Malvacías / 3RD CLASS CITIZEN  to create 6 duets entitled A B C D E F which explore how the production of choreography is intertwined with process and instant performance. The practice of manipulating images and concepts onsite following a strict conceptual frame can produce instant movement and unravel choreography that is full of content and related to specific thoughts. The project uses signposts and issues connected with life and aging, as a framework for this exploration.

Jeremy Nelson is a dancer/choreographer and former member of the Siobhan Davies Dancers and Second Stride Dance companies in London, and Stephen Petronio Dance Company in New York. He has also danced in the work of Mia Lawrence, David Zambrano, Susan Rethorst, Luis Lara Malvacías, and in his own work, and with improviser Kirstie Simson. He received a New York Dance and performance “Bessie” Award for outstanding performance in 1991 and a Guggenheim Fellowship for choreography in 2004. He is a faculty member of Movement Research in New York and over the past more than 30 years has taught classes/workshops in over 30 countries at venues including American Dance Festival, ImPulsTanz, P.A.R.T.S., and the Sasha Waltz Company among others. He has been presenting and performing his own choreography since 1994 – in New York at venues such as Danspace Project, Dance Theater Workshop and PS 122, as well as in several countries including Spain, Germany, England, Finland, Slovakia, Canada, Venezuela, Chile, Argentina, Uruguay and Japan. He was Head of the Dance Education at the Danish National School of Performing Arts from 2009 – 2015, and is now Associate Arts Professor in the Dance Department at New York University’s Tisch School of the Arts.

Born in Venezuela, Luis Lara Malvacías is a choreographer, dancer, designer and visual artist. He has danced in the work of Jeremy Nelson (1994 – 2004), David Zambrano, Mark Tompkins, Yoshiko Chuma, and in his own choreography. Performing with the John Jasperse Company at the Rencontres Chorégraphiques Internationales de Bagnolet in Paris in 1996, he won the Group Performance Award. He has also being in creative residences at Le Pacific in Grenoble and Labor Gras in Berlin and was a 1998/1999 and 2002/2003 Movement Research Artist-in-Residence. He has received support for the creation of his work from, among others the MAP Rockefeller Funds and The Jerome Foundation, and was the recipient of a 2006 NYFA Fellowship for choreography. He holds a Master of Fine Arts (MFA) in New Media. He has presented his work in New York since 1994, including DTW, PS122, Danspace Project, the Kitchen and Joyce SoHo among others. In the United States he has taught, created and presented work in several colleges and institutions. Internationally, he regularly teaches and present work in many countries in Europe, South America, North America and Asia. He has also created work for repertory companies in Venezuela, Italy and the USA and for students at Texas Christian University, Stephen’s College, University of Madison, SEAD in Salzburg, the NSCD in Leeds, England and The Danish National School of Performing Arts in Copenhagen. His choreographic work is presented now under Luis Lara Malvacías/ 3RD CLASS CITIZEN. He has created several touring performances –installations projects that involve his interest in collaborative multi-cultural and multi-disciplinary projects presented in no- conventional spaces. In 2000 at the Asyl Gallery-NY, he presented Purchase, an interactive performance installation, that challenged the usual perspective of viewer and performer: the audience had the opportunity of choosing the dancer(s)-set-music-costumes and seeing their own performances in a chosen installation space. And since 2003 he has been creating and presenting his conceptual artistic object entitled NOT FESTIVAL.