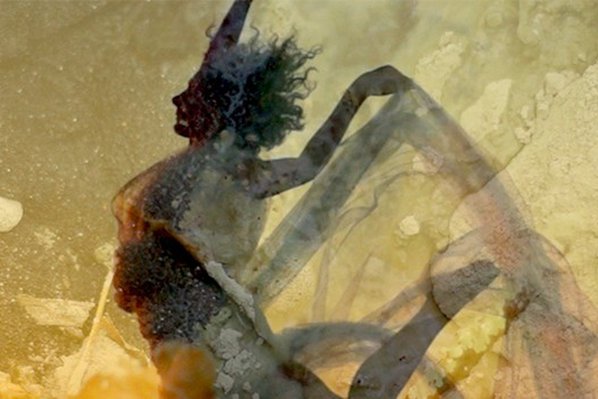 The Sara Galas Band, formed by actor/singer/songwriter Sara Galassini and composer/multi-instrumentalist Yukio Tsuji, joins forces with a unique multicultural artistic team to theatrically portray today’s dynamic and troubled society in an interdisciplinary performance of original music, poetry and lyrical imagery. “Unmeasurable Picture” delves into the inconsistencies and oppositions of human behavior. The dualities of human nature that can make life and love blossom or slowly die and vanish. Dreams and visions, illusions and awareness, creation and destruction, power and conflict,hope and spirituality are just some of the transcultural symbols explored by the Sara Galas Band.

The non-linear narrative of the show unfolds in a series of dream-like music-based scenes that portray a woman (Sara Galassini) on the journey for self-discovery.
Through the experience of life and the guidance of nature’s teachings and spirituality: Will she find her place in the world? Maria Elena Anaya’s magnetic dances embody and evoke the opposing forces of the spirit. A spirit that has the potential to transform humanity’s perception of reality and reconcile human nature with the divine, with love and a sense of belonging. Galassini and Anaya’s encounter on stage unravels the unseen, the unknown, through a choreographic dialogue between movement, word and sound.

About The Sara Galas Band

Sara Galassini launched her career in NYC as a member of La MaMa in 2000. Arriving from Siena, Italy, by the invitation of Ellen Stewart, Galassini has developed her creative talent and musical sensibility by collaborating with award winning Japanese composer and multi-instrumentalist Yukio Tsuji. Tsuji’s wide expertise in composition, variety of sound and well-known mastery of percussion, shakuhachi and guitar can been heard on countless film soundtracks, dance and theater productions around the world. The Duo’s eclectic sound takes root in the tradition of Italian music but creates rhythmic and melodic motifs that belong to world, jazz, rock, reggae, bossa nova, tango, flamenco and folk music. Tsuji’s acoustic arrangements underscore Galassini’s poetic lyrics in Italian and English with sheer inventiveness and simplicity resonating a distinct spiritual force that is strongly present in Galassini’s words.

The Sara Galas Band has performed in NYC Lounges, Theaters and Festivals including: Japan Society, La MaMa, Dixon Place, Nuyorican Poets Café, M.E.A.N.Y Fest 2013, the Great Hall at Cooper Union, and in Italy at the Spoleto54 Festival and the Umbria Fringe Festival. In May 2013 the TG2 Dossier “Big Italy” dedicated to the Italian artists in the United States portrayed the Sara Galas Band as representative of the Italian Culture abroad.