The Pill – A Family Memoir 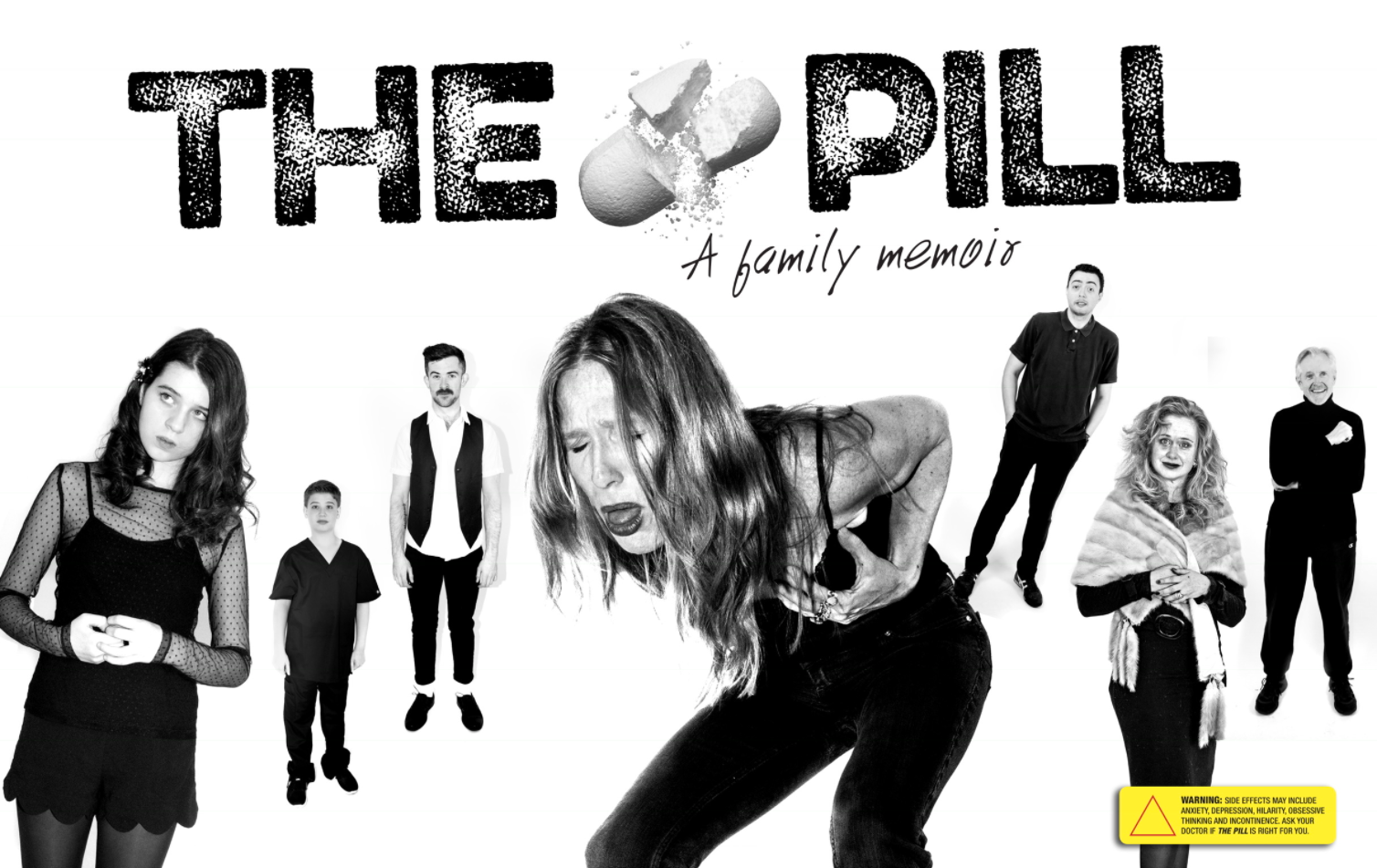 Thursday to Saturday at 7pm; Saturday and Sunday at 2pm

When Sylvia accidentally takes her anorexic daughter’s anti-depressant, panic and pandemonium ensue.  A true story, this Rashomon-like black comedy (with music) presents the event from the perspectives of five family members (mom, son, daughter, and grandparents.) Full of love, humor, and feeling, The Pill is a comic and tragic mash-up of three generations’ take on living and dying.

The Pill features an ensemble cast of actors led by NYMF Award-winner for Outstanding Performance Zoe Wilson (Play Like A Winner, Orange Is the New Black) as Leni and Obie Award-winner Winsome Brown as the family matriarch, Sylvia. The pair are joined onstage by Joshua Turchin (A Christmas Story), Broadway veteran Roger Rathburn (No, No, Nanette), Drama Desk Award-winner Graham Stevens (In Transit), Marina Re (Irrational Man) and Adam Patterson (CasablancaBox).

MARLA MASE (Playwright) is a writer/performer/producer/singer/songwriter from New York City. Known for her gutsy, sexy, raw performance style and lyrics that “make you think”, Marla is regarded by her peers and fans as a true musical pioneer.  Her songs, a mix of punk, funk, spoken word, power pop and classic rock-n-roll are infused with Global Soul, the signature sound of True Groove Records, the record label she founded with her partner/collaborator Tomás Doncker. Along with triumphant tours in China, Europe and the United States, Marla received a ‘Messenger of Peace’ Award from the Friends of the UN for her visionary work as a songwriter and performer.  Her multi-media performance concert SPEAK premiered at NYC Summerstage 2013, and set the stage for her next release, Half-Life, which was heralded as “The first great album of 2014″.  It featured legendary Ikonoklast producer/bassist Bill Laswell playing bass on “The Heart Beats.” It was their second collaboration – Laswell also provided a dubmix of “AnnaRexia” from Mase’s SPEAK DELUXE collection. In 2017, Marla was a featured performer at SXSW as well as a featured performer (live recording session) on the taste-making music site Daytrotter.com. A long time creative force in groundbreaking NYC theatre as an actress, writer and producer, Marla is best known for her play The Canarsie Line, her rock opera A Brief Night Out, and Speak. Her most recent work Miracles~Lost & Found: A Rock-n-Roll Rumination (directed by Lisa Milinazzo)  based on her 2016 album by the same name, weaves elements of psychedelia, power pop, modern opera, spoken word, film-noir vignettes into a prescient multi-dimensional performance piece about living and dying in our world today. marlamase.com

THE FAMILY (Contributing Writers). The Pill was conceived by Marla Mase, but incorporates retellings of the events that inspired the play written by Marla’s son Yanai Feldman, her late daughter Lael Summer, her father Howard Mase, and her mother Roberta Mase.

YANAI FELDMAN – a student at Pomona College, Yanai is a published writer, a math major, a foodie, a traveler. He is the intellectual of the family. It has been said that his aura walks into a room five minutes before his body does.  He also wrote half the play.

LAEL SUMMER – Singer/songwriter Lael Summer has two albums, Burden to Bear and Life in Color. Her debut album Burden to Bear was critically acclaimed and she was cited to be the one to watch out for by Earmilk.com, AbsolutePunk, The Big Takeover, KingsofA&R, Soultracks, amongst other prominent music blogs.  Her song “Dream Machine” was written by NYS Poet Laureate Yusef Komunyakaa.  Lael was a graduate of USC’s elite Pop Music Program, 2014.  She was a yoga teacher, a healer and an inspiration to all who knew her.  We love and miss you Lael.

HOWARD MASE, Ph.d – still working at 82 (executive coach, organizational psychologist) and a mentor to thousands, Dr. Howard Mase has a fan club of people who cannot make a move or take a step without his words of wisdom. The most loved man on the planet. Join The Cult of Howard today.

ROBERTA MASE – the most interesting person in the family and The Muse, Roberta is a songwriter, a parodist, and looks like a 1940’s movie star. She never leaves the couch and is happy that way.

TOMÁS DONCKER (Composer/Sound Design) cut his teeth as a guitarist with such genre-busting groups as James Chance & The Contortions; Defunkt; J. Walter Negro & The Loose Jointz; and many more, making him a prime mover on New York’s downtown “No Wave” scene in the early 1980s. Eventually he went international, touring and recording in Japan with jazz pianist Masabumi Kikuchi, and producing studio and songwriting sessions with Bootsy Collins, Yoko Ono, and Grammy-nominated Reggae vocal group The Itals, among others. Since then, Doncker has continued to work with such iconic artists as: Madonna, Ivan Neville; Bonnie Raitt; Meshell Ndegeocello; Corey Glover of Living Colour; former Parliament Funkadelic keyboardist Amp Fiddler; 2013 Grammy award nominee Shamekia Copeland. His ongoing collaborations with NYS Poet Laureate and Pulitzer Prize winner Yusef Komunyakaa (the critically acclaimed album “Big Apple Blues” and the highly anticipated 10 Anniversary release of “The Mercy Suite”) are celebrated worldwide.  His most recent theatre & film composition credits include: “Dick & Jack” a feature film by world renown artist John Ransom Philips plus “Power of the Trinity” “Diablo Love” and “Speak” were all produced at NYC Summerstage; “Miracles~Lost & Found”, “Bounce: The Basketball Opera” (produced by Ardea Arts in conjunction with University of Kentucky) and “Lambs to Slaughter” by actor/director/writer Khalil Kain. Beyond that, he has produced hundreds of records and is the Founder and CEO of NYC’s fastest rising record label, True Groove Records. Tomásdoncker.net

TRUE GROOVE (Artistic Development & Production) – Established in 2014, True Groove was initially an independent record label whose mission was to develop and produce artists whose music spoke about topics that matter to the masses.  CNN cited True Groove’s  “Global Soul” ethos as the beginning of a new genre in contemporary music.  Since that time, True Groove has expanded into Theatre and Film. “So many artists that we work with do music, but they also write plays, act and make movies.  In these days you have to do it all and we look for these modern day poets who are desperately trying to connect us back to something.  In a world that seems focused on disconnecting, we hope to help people reconnect in whatever we can.” The Pill (La Mama, 2018), Miracles-Lost & Found : a rock-n-roll rumination (Dec 2017 debut), The Power of the Trinity( Summerstage 2012), Diablo Love (Summerstage 2013), Speak (Summerstage 2013), Lambs to Slaughter (in development), The Mess We Made (2016-2017 tour) are all theatre projects that True Groove has produced and helped to create.  True Groove also scored Dick & Jack, a film by renown artist John Ransom Philips and is the Executive Producer/Producer of the upcoming Dylan Mars Greenberg film “Spirit Riser”.  www.truegroove.nyc

RANDOLPH CURTIS RAND (Director) is a theatre artist, based in New York, and Wash. DC. His work encompasses directing, design, performing dramaturgy, and teaching. Most recently he played the lead in Dracula at Actors Theatre of Louisville, and directed an all-male production of 2 Gentlemen of Verona at The Scranton Shakespeare Festival. Other directing: Pantasmagoria; Or, Let Us Seek Death at LaMama, and his own adaptation of Uncle Tom’s Cabin for The Drama Dept. Artists and companies he’s worked with: Joseph Chaikin, Elevator Repair Service, Richard Foreman, Meredith Monk, New York Theatre Workshop, Orlando Shakespeare Theater, Pig Iron Theatre Company, The Public Theater, The Rude Mechs, and The Wooster Group, among others.

ZOE WILSON* (Leni) is honored to reprise her role as Leni and once again work with her friends at True Groove! Select Professional Credits: Play Like a Winner @ Playwrights Horizons (NYMF 2017 Outstanding Individual Performance Award), White Effie in “Orange is the New Black” Season 5, Transport Group’s Peter Pan @ The Signature (Wendy), Three Days to See @ NYTW (Helen Keller), Diana and Navy @ 54 Below, The Pill (reading) and recently Agatha in Soman Chainani’s trailer for The NY Times Best Seller The School For Good and Evil. Zoe is a proud member of AEA/SAG, plays ukulele, writes music and is recording her first single. A heartfelt thank you to my manager, Lauren Singer, Innovative Artists, Badiene Magaziner, Joseph Olson, Marla Mase and Tomas’ Doncker. To Lael Summer, your life will never be forgotten.

JOSHUA TURCHIN* (Little Philip) is honored and thrilled to reprise his role as Young Philip, work with this incredible team, and help bring this important story to life! He is proud to have recently performed at TrevorLIVE LA as Trevor, from the Broadway bound musical, Trevor the Musical for numerous Broadway and Hollywood luminaries. Select professional credits include: Christmas in Hell (Davin/Urban Stages Winter Rhythms Festival, and featured on the Cast Album); A Christmas Carol (Tiny Tim / Century Club); Caroline or Change (Noah Gelman / Tantrum Theater); A Christmas Story the Musical Broadway National Tour (Randy Parker- 2016 Broadway World Phoenix Award for Best Actor in a Musical -Professional); XY the Musical (Christine / ASCAP Musical Theater Workshop); School of Rock Broadway Promo Team; Sherlock Holmes and the Case of the Fallen Giant (Jack); Green Eggs and Hamadeus (Sam I Am / Cleveland Orchestra); Kris Kringle the Musical – Equity Reading (Boy Elf);  English Egg animated series (recurring). He can also be heard on several cast albums and is a recurring voiceover actor with iHeart Radio. When he is not performing, Joshua, also a musician, is composing a new musical, which he hopes to bring to the stage soon! www.joshuaturchin.com & Instagram @joshuaturchin! Proud member of AEA. Thanks to True Groove/Marla, Tomas and The Pill family for this opportunity, and to Janine, Julia, Nancy, Sherry, Thatcher and my family! In memory of Mom Mom and Papa Jerry. For Lael.

Review: “A joyful coming together in the face of mental illness, divorce, and paranoia.”

“In addition to plans to produce Feldman’s final songs, the family is also producing a play – entitled “The Pill” — about a funny episode with Feldman and her depression written by several members of the family, including Mase’s 20-year-old son, father and mother.”