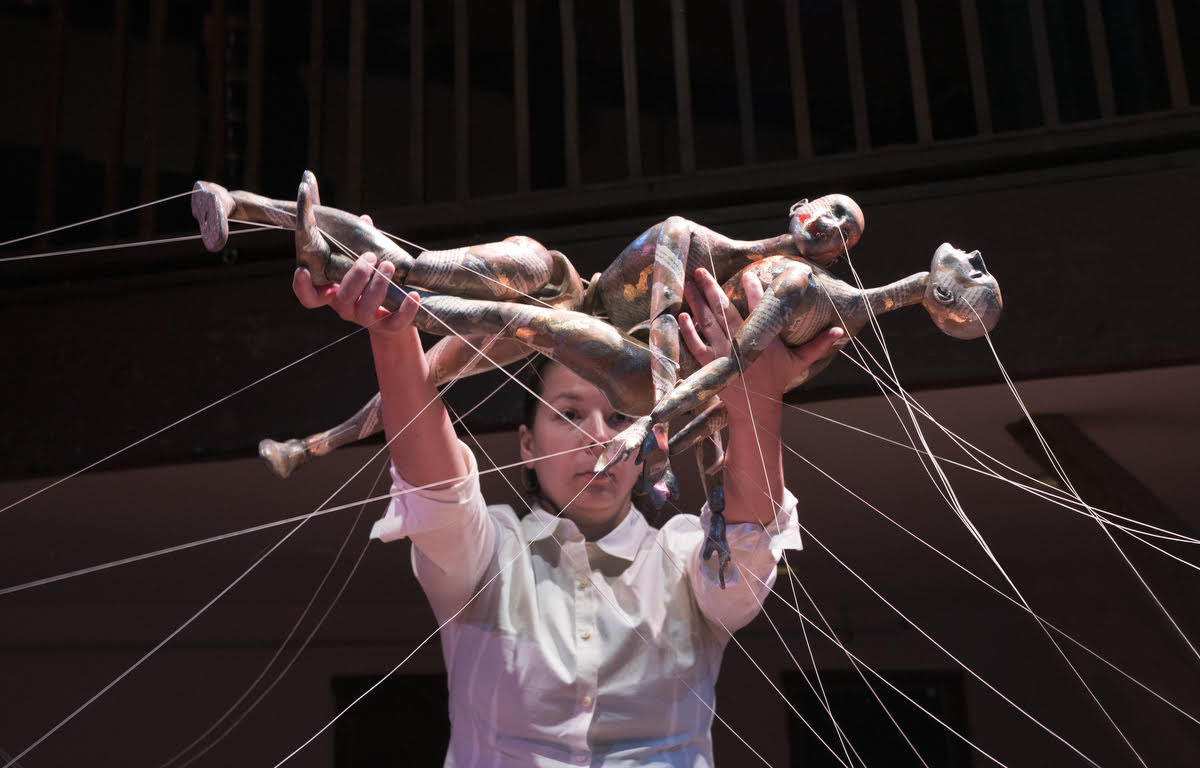 Wednesday – Sunday from 1pm to 7pm

New York-based photographer Richard Termine has documented American Puppet Theater for over 30 years. Termine’s work captures the animated gesture of the puppet in still images. Over 100 images and objects in this exhibition illustrate the dynamic range of Puppet Theater being created by a vibrant community of artists in the New York City area, as well as some of the excellent work presented at National Puppet Festivals across the United States.

A special section, "Puppetry During the Pandemic," celebrates resilient puppet artists who continued to create and perform new work through the past year.
‍

“My training and work experience in puppet theater preceded my career as a photographer. It has shaped and guided my work with the camera.

My challenge as a photographer of puppet theater is to capture the animation of the puppet in a still image.  To do that, I focus on the gestural life of the puppet, seeking to capture the “decisive moment” when the figure is most animated and a peak dramatic event is visualized.

Through the camera lens I am connected to the puppet and the puppeteer.  I compose through the lens, and I feel a rich, creative exchange of energy as I shoot an art form I know and love.

Any photographer of theatrical performance is only as good as the artists they work with.  It has been a blessing to collaborate with some of the most talented puppet artists in America and to capture their unique artistry.”

Richard Termine attended the University of Connecticut and completed his MFA in Puppet Arts  in 1978.  In 1980, he began his association with The Jim Henson Company as a puppet designer and builder for a variety of Muppet productions and was honored with an Emmy Award in 1987 for his design work on Sesame Street.  His puppet theater production of Diary of a Madman received a UNIMA-USA Citation for Excellence in 2002.

While working on the set of Sesame Street in New York City in the mid-1980s, Termine began photographing behind the scenes. This work led to a new career as a performing arts photographer. He has photographed many of the world’s leading performers and puppet artists. Currently, Richard is a photographer for the culture desk of The New York Times. His other clients include Carnegie Hall, Lincoln Center, and The Metropolitan Opera.  He has been the in-house photographer for Sesame Street since 1988 and has been on the board of The Jim Henson Foundation since 1987, currently serving as the Foundation’s Vice President.

The Jim Henson Foundation was founded in 1982 by Muppets creator Jim Henson to support the art of puppetry in the United States. Cheryl Henson became the President of the Foundation in 1992. Since it began, the Foundation has awarded over 1000 grants to more than 360 puppet artists for the creation, development, and presentation of new works of innovative contemporary puppet theater.

From 1992–2000, the Foundation produced the largest international festivals of puppet theater in the United States. Initially presented on the five stages of the Public Theater, the festival expanded to 24 stages including La MaMa, HERE Arts Center, and PS122 and presented 136 different productions from 31 countries. With Cheryl Henson as Executive Producer and Leslee Asch as Producing Director, the five festivals brought the best of contemporary puppetry from all over the world to New York audiences and garnered critical acclaim for puppet theater. The city continues to foster an extraordinarily dynamic creative community of puppet artists as well as a number of wonderful theaters committed to including puppetry in their seasons.

In addition to Artist Grants for the development of new works, the Foundation currently offers Presenters Grants to theaters in the New York City area, an annual residency at the Eugene O’Neill Theater Center, and two international travel grants called the Allelu Award, named after founding board member Allelu Kurten. The Foundation is proud to present Richard Termine’s photographs, which include many Foundation grant recipients.