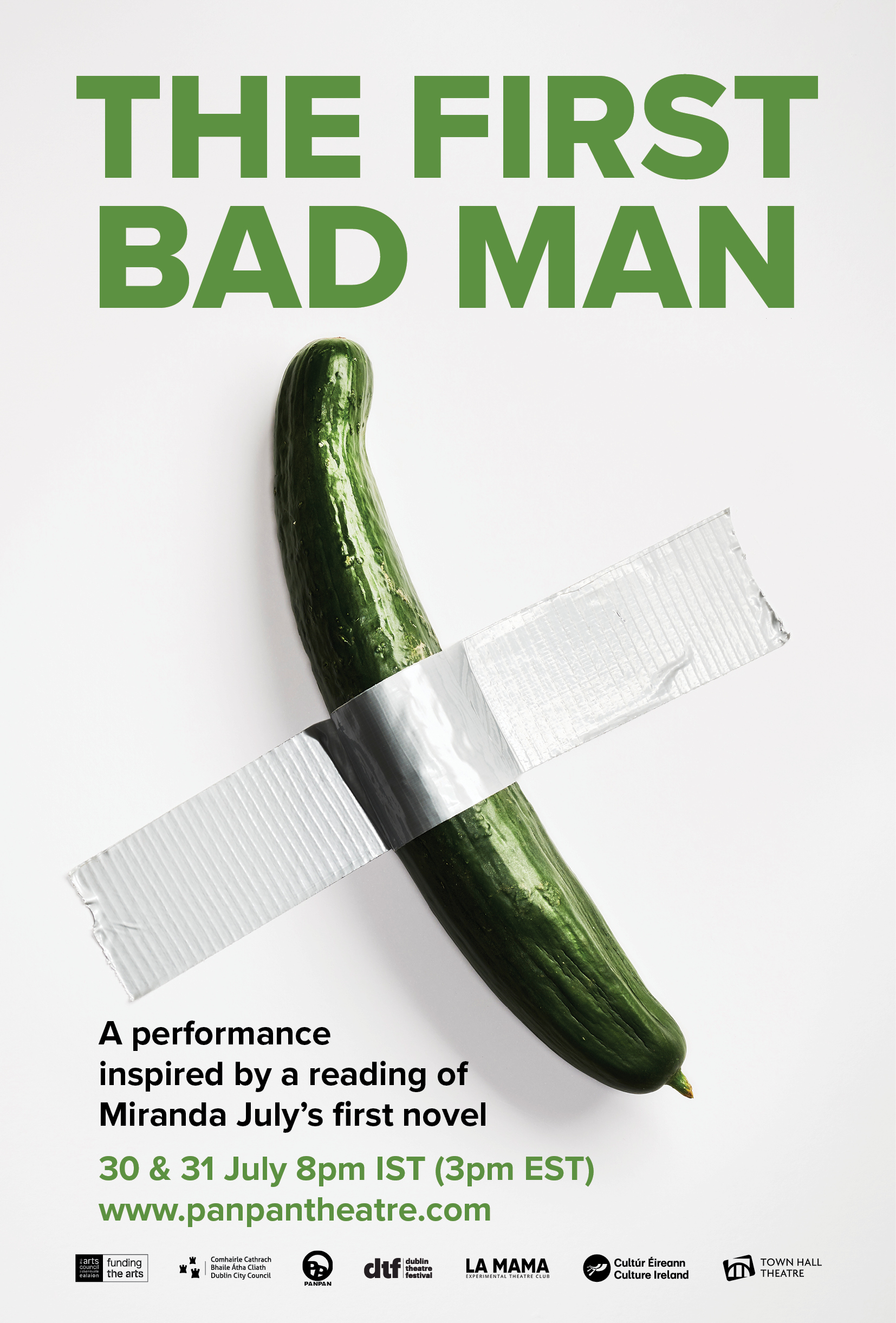 a two-part performance streamed in 360

based on a reading of THE FIRST BAD MAN

a novel by Miranda July

Pan Pan is supported by The Arts Council of Ireland and Dublin City Council.

a two-part performance streamed in 360

based on a reading of THE FIRST BAD MAN

a novel by Miranda July

This is an online event.

Kitty Blennerhasset, John Benno, Rose McVittie and Freya Golden have recently joined a book club. Their first book is The First Bad Man and every week for a year they keep coming back to it. This performance is a telling of these book club members' encounter with the characters of Miranda July’s novel.

This is a two part performance available to watch in 360 or to watch in 360 Stereo using VR headsets. Each performance can be enjoyed as a stand alone event but also please come to more than one if you can afford the time. The performances will take place on the 16th and 17th July at 8pm (IST) and 3pm (EST).


Miranda July is a filmmaker, artist, and writer. Her most recent book is The First Bad Man, a novel. July’s collection of stories, NO ONE BELONGS HERE MORE THAN YOU, won the Frank O’Connor International Short Story Award and has been published in twenty-three countries. Her writing has appeared in The Paris Review, Harper’s, and The New Yorker; IT CHOOSES YOU was her first book of non-fiction. She wrote, directed and starred in THE FUTURE and ME AND YOU AND EVERYONE WE KNOW — winner of the Camera d’Or at the Cannes Film Festival and a Special Jury Prize at Sundance. July’s participatory art works include the website Learning to Love You More (with artist Harrell Fletcher), Eleven Heavy Things (a sculpture garden created for the 2009 Venice Biennale), New Society (a performance), and Somebody (a messaging app created with Miu Miu.) Most recently she made an interfaith charity shop in Selfridges department store in London, presented by Artangel. She is currently working on a new feature film. Raised in Berkeley, California, July lives in Los Angeles.

Pan Pan was founded in 1993 by Co-Artistic Directors Aedín Cosgrove and Gavin Quinn. The company has created 43 new theatre and performance pieces and toured worldwide, receiving multiple national and international awards. Since its inception, Pan Pan has constantly examined and challenged the nature of its work and has resisted settling into well-tried formulas. Developing new performance ideas is at the centre of the company’s mission. All the works created are original, either through the writing (original plays) or through the totally unique expression of established writings. Pan Pan tries to approach theatre as an open form of expression and has developed an individual aesthetic that has grown from making performances in a host of different situations and conditions.
Pan Pan is committed to presenting performances nationally and internationally and developing links for co-productions and collaborations. The company has toured in Ireland, UK, Europe, USA, Canada, Korea, Australia, New Zealand and China.