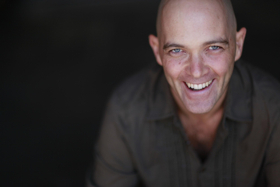 and live music by

Stage Managed by Jialin He

Taylor Mac—who uses “judy” (lowercase sic unless at the start of a sentence, just like a regular pronoun), not as a name but as a gender pronoun—is a playwright, actor, singer-songwriter, performance artist, director and producer. Judy’s work has been performed in hundreds venues including on Broadway and in New York’s Town Hall, Lincoln Center, Celebrate Brooklyn, and Playwrights Horizons, as well as London’s Hackney Empire and Barbican, D.C.’s Kennedy Center, Los Angeles’s Royce Hall and Ace Theater (through the Center for the Art of Performance), Chicago’s Steppenwolf Theatre, the Sydney Opera House, The Melbourne Festival (Forum Theater), Stockholm’s Sodra Theatern, the Spoleto Festival, and San Francisco’s Curran Theater and MOMA.

Judy is the author of many works of theater including, “Gary, A Sequel to Titus Andronicus”, “A 24-Decade History of Popular Music”, “Hir”, “The Walk Across America for Mother Earth”, “Comparison is Violence”, “The Lily’s Revenge”, “The Young Ladies Of”, “Red Tide Blooming”, “The Be(a)st of Taylor Mac”, “Cardiac Arrest or Venus on a Half-Clam”, “The Face of Liberalism”, “Okay”, “Maurizio Pollini”, “A Crevice”, and “The Hot Month” and the soon to be premiered plays “Prosperous Fools” and “The Fre”.

Sometimes Taylor acts in other people’s plays (or co-creations). Notably: Shen Teh/Shui Ta in The Foundry Theater’s production of “Good Person of Szechwan” at La Mama and the Public Theater, in the City Center’s Encores production of “Gone Missing”, Puck/Egeus in the Classic Stage Company’s “A Midsummer’s Night Dream”, and in the two-man vaudeville, “The Last Two People On Earth” opposite Mandy Patinkin and directed by Susan Stroman.

Mac is a MacArthur Fellow, a Pulitzer Prize Finalist for Drama, a Tony nominated playwright, and the recipient of multiple awards including the Kennedy Prize, a NY Drama Critics Circle Award, a Doris Duke Performing Artist Award, a Guggenheim, the Herb Alpert in Theater, the Peter Zeisler Memorial Award, the Helen Merrill Playwriting Award, 2 Bessies, 2 Obies, a Helpmann, and an Ethyl Eichelberger Award. An alumnus of New Dramatists, judy is currently a New York Theater Workshop Usual Suspect and the Resident playwright at the Here Arts Center.

Gabriel Berry was in a castle in Budapest (then a workers' museum) overlooking the Danube when a voice spoke to her: "Go to New York and be a costume designer." “OK,” she thought, “Good idea.” It was late 1978. She got the next train out of town, made her way back to her home in North Carolina, packed her bags, and moved to New York. She arrived in early 1979. She moved into a loft on The Bowery alongside musicians, dancers and painters. Within a few months she met Ellen Stewart, made her New York debut designing costumes for Charles Ludlam's The Enchanted Pig,and became the costume designer in residence at La MaMa E.T.C. A list of artists she collaborated with at this time includes John Albano, Christopher Alden, Ken Bernard, Ed Bullins, Du-Yee Chang, Donald Eastman, Tom Eyen, María Irene Fornés, Ron Link, Mabou Mines, Robert MacBeth, Leonard Melfi, Anne Militello, Tom O'Horgan, Robert Patrick, James Rado, Gerry Ragni, Andrei Serban, Elizabeth Swados, Julie Taymor, John Vaccaro, Mac Wellman and Mel Wong. Companies and venues include Coney Island USA, Dance Theater Workshop, Danceteria, The Pyramid Club, the Ridiculous Theatrical Company, Theater For the New City, and of course, La MaMa.

Melanie Joseph is a theatre maker and founding Artistic Producer of The Foundry Theatre. For her work with The Foundry, she has twice been honored with the Ross Wetzsteon OBIE for “creating cutting edge work” and “engaging artists in some of the thorniest issues of the world we inhabit.” She is a recipient of the Doris Duke Artist Prize, the Skirball Kennis T.I.M.E. Artist prize, a Lucille Lortel Award for Artistic Producing, and has twice been awarded the Duke/ Mellon Mentorship grant for mentoring “theatre leaders of tomorrow.” Joseph holds a BA in Literature from the University of Western Ontario and a Post-Baccalaureate degree in Pre-Medicine from the City University of New York.   melanie@thefoundrytheatre.org

Barbara Maier Gustern is an international known voice teacher, singer/actor, director who numbers among her students icons Debbie  Harry, Diamond Galas, and John Kelly. Currently she is the vocal coach for Broady’s Oklahoma. But the high light of her career is teaching Taylor Mac, especially  having prepared  for the 24 Hour epic and playing Mother in the production.

Smith is co-director of the critically acclaimed ‘A 24-Decade History of Popular Music’, winner of the Kennedy Prize in Drama, Bessie Award, the Edwin Booth Award and a Pulitzer Prize finalist. He was also the associate director of the Tony Award winning musical FELA! – restaging that production in London, Lagos and its world tour, assistant directed the off-broadway production of The 25th Annual Putnam County Spelling Bee and both the Broadway and off-Broadway productions of Tony Kushner’s Caroline, or Change.  He has worked on the artistic staffs of The Public Theater, Trinity Repertory Company and Providence Black Rep. A graduate of Dartmouth College, Smith has received residencies, grants and/or fellowships from Brooklyn Arts Council, Brooklyn Arts Exchange, Lower Manhattan Cultural Council, the MAP Fund, New York Stage and Film, Sundance Theatre Lab, Theater Communications Group, Tucker Foundation, Van Lier Fund and VoxFest. Before surviving high school in Detroit, he grew up in the North Carolina piedmont, fishing with his dad, shopping with his mom and inventing tall-tale fantasies with his two younger brothers. www.niegelsmith.com

Timothy White Eagle is an Indigenous American ceremonial leader,  visual, installation and performances artist.  He is the Dandy Minions Artistic Director for Taylor Mac’s “A 24 Decade History of Popular Music”.  In March 2020 his new evening length performance “The Violet Symphony” premieres at On The Boards in Seattle.

BERNICE BROOKS (Drums) is a drummer, television producer and teaching artist. She is without a doubt one of the most versatile female drummer locally, nationally and internationally. After studying at the Conservatory of Music in Chicago with various teachers and instructors, she went on to hone her skills at various venues with different musical directors, leaders, bands and groups internationally. She has produced a television show for the last twenty years on bricartsmedia.org. titled "The Bernice Brooks Show". She has played in many commercials, theatre and many recordings. She has a long list of artists and performers that she has opened for or played with, including Shelia E., The O'Jays, Ray Charles, Tito Puente, Bill Withers, Elvis Costello, Joanne Brackeen, Etta James, Gregory Hines, Savion Glover and many others greats of Gospel, Jazz, Blues and R&B. She has been touring with MacArthur Fellow Taylor Mac for the last four years.

VIVA DECONCINI (Electric guitar) plays guitar like a flaming sword, a screaming train, a ringing bell, and a scratching chicken. She sings like if Freddy Mercury had been a woman.  She's played everywhere from Bonnaroo to Monterey Jazz Fest, and been featured in Guitar Player Magazine.  Her last 2 records "Rock & Roll Lover" and “Rhinestones & Rust” charted on CMJ.

GREG GLASSMAN (Trumpet) has shared the stage and recording studio with some of the greatest voices in jazz, including Clark Terry, Marcus Belgrave, Roswell Rudd, Sheila Jordan, Oliver Lake, Sherman Irby, and John Esposito. He has performed around the world with a diverse array of artists including The Skatalites, Oscar Perez’s Nuevo Comienzo, and Burning Spear. Glassman’s current focus is his quintet, co-led with Stacy Dillard, which holds a residency of 8 years at Fat Cat in Greenwich Village.

MATT RAY (Arranger, Music Director, Piano) is a Brooklyn-based pianist, singer, songwriter, arranger, and music director. His arrangements have been called “wizardly” (Time Out NY) and “ingenious” (NY Times), and his piano playing referred to as “classic, well-oiled swing” (NY Times) and “to cry for” (Ebony). For his work on Taylor Mac’s show A 24-Decade History of Popular Music he and Mac shared the 2017 Kennedy Prize for Drama Inspired By American History. Notable live performances include playing at Carnegie Hall with Kat Edmonson, playing the Hollywood Bowl with reggae legend Burning Spear, and touring the Caribbean and Central America with his piano trio as a US Department of State Jazz Ambassador. His show Matt Ray Plays Hoagy Carmichael featuring Kat Edmonson premiered at Lincoln Center’s American Songbook series in 2018. Other work includes music directing The Billie Holiday Project at the Apollo Theater in Harlem, recording for and appearing in the hit film Can You Ever Forgive Me? with Justin Vivian Bond, Lincoln Center with Joey Arias, Edinburgh Fringe with Lady Rizo, music directing Taylor Mac’s Obie award winning play The Lily’s Revenge at the HERE Arts Center in New York, and co-writing songs for and performing in Bridget Everett’s one-hour Comedy Central special Gynecological Wonder as well as Everett’s hit show Rock Bottom. Matt has released two jazz albums as a leader: We Got It! (2001) and Lost In New York (2006); and one album of original pop/folk material called Songs For the Anonymous (2013). mattray.nyc

GARY WANG (Bass) has been playing professionally in New York City for more than twenty-five years, performing, touring, and recording with artists including Anat Fort, Taylor Mac, Ben Monder, Chris Cheek, Matt Ray, Madeleine Peyroux, T.S. Monk, Molly Ringwald, and Dena DeRose, amongmany others. Gary has also been involved in composing and music production, most recently with his own solo project Shapes On Parade, with two albums released on Bandcamp in the last two years. He is a member of the San Francisco–based band The Invisible Cities, and has also contributed production and overdubbing work to projects by numerous artists, including Michael Leonhart, Sam Sadigursky, and Goh Nakamura. Gary also composed and recorded the music for several recent collaborations with choreographer Kakuti Lin and the Full Circle Dance Company.