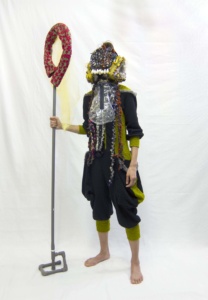 Gallery Hours: Thursday to Sunday 1 to 7PM, or by appointment

PIPORNOT’s Superorganism features installation work, photos, paintings and video created by aricoco (Ari Tabei) and an interactive performance by aricoco and Julia Benedict (writer/theater-maker) with the help of public participants. The installation explores the existence of insect society as a superorganism — a highly specialized altruistic community, where an individual is dependent on the greater system for survival. The immersive installation will emulate a human campsite, which is the closest meeting point of ant and human colonies. Guided by instructions, the audience will be invited to navigate the installation. aricoco, disguised as an insect queen, will need the help of the audience to complete her ritual of surrendering her powerless body to the habitat. Through the performance, the careful relationship between the powerless insect queen (a symbol of decentralized power) and her sterile workers (a key to the altruistic society) will be examined.

After launching the project PIPORNOT in 2014, aricoco has been leading the project in collaboration with Julia Benedict while communicating with scientists who study insect social evolution and behavior. PIPORNOT is a collaborative exploration of temporary community building through insect eusociality. Utilizing workshops, various visual methods and performative processes, the concept of “community” is investigated by paralleling human society with insect non-hierarchical systems.

This exhibition is a culmination of their collaborative research experiences and an accumulation of performative actions prompted by altruistic behaviors of social insects.

This exhibition was made possible, in part, by the Franklin Furnace Fund supported by Jerome Foundation, the New York City Department of Cultural Affairs in partnership with the City Council; and with general operating support from the New York State Council on the Arts