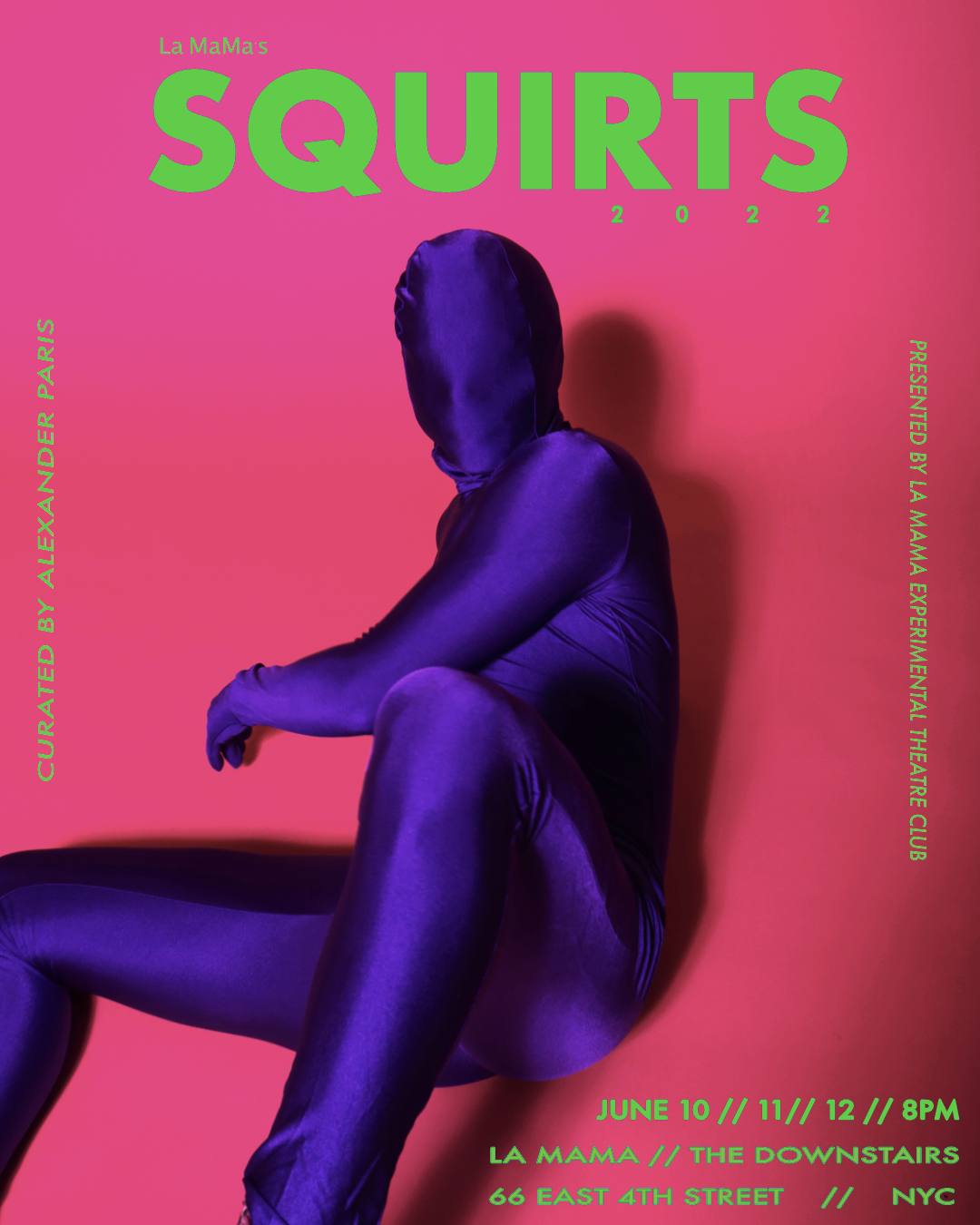 La MaMa presents La MaMa's Squirts: Past // Present // Future. The intergenerational queer performance festival enters its 10th year with new curation and direction by Alexander Paris, following the success of Squirts 2020 (Digital), and succeeding former director and creator Dan Fishback. This year's festival focuses on time as a thematic anchor, with each day offering a different focal point (Past, Present, and Future). Join a star-studded lineup of downtown legends and up-and-coming performers of the new Brooklyn vanguard.

Alexander Paris is a multidisciplinary performance artist, playwright, and curator. Their work is often seen as performance art at the intersection with theatre, stand up, drag, and film. They have had fellowships with University Settlement, Clubbed Thumb, The Lark, and the New Visions Fellowship. Favorite projects of 2021 include Legacy's The Black Beginning—a video cabaret presented with Ars Nova; as co-writer and performer with Hannah Kallenbach in Bullshit at JACK; in drag artist Mthr Trsa's HOLE PICS; as an actor in Raja Feather Kelly's The Kill One Race, a faux relity show presented by Playwrights Horizons; as well as unrest, a roving immersive play by Curb Alert, presented in Oakland, CA. They perform and produce a monthly experimental drag review with Voxigma Lo and Julie J at Purgatory (Brooklyn) called Sylvester.

David Lee Sierra is an artist and writer. She practices and researches performance and production in many contexts, performing and producing her own work and that of other artists. Sierra reads and writes about sex, science, fiction, and language. She creates text, dance, video, sound, images, installation, and public programming. Her artistic practices are concerned with embodied experiences of movement and sound in procedural settings, horror, and medical technology. Sierra is the Digital Media Editor for Women & Performance: a journal of feminist theory.

Claywoman is a 500 year old extra-terrestrial from the Mirillion Galaxy.  She frequently visits Earth, her favorite planet, giving lectures at various events and engaging in public conversation with prominent human artists and intellectuals.

Michael Cavadius is an actor/writer and performer.  Film and TV credits include Wonder Boys, All We Had, I Remember Nothing, Girls, and Difficult People. Theatre credits include Ahohni’s “She Who Saw Beautiful Things” at The Kitchen and “Star Odessey - The Pilot” at MoMA PS1.  Claywoman was originally created at Blackips Performance Cult in the 90s and developed at Mabou Mines with Ruth Maleczech. More recently,  The Mystery of Claywoman was presented at The New Museum, The Wild Project, Town Hall, Abrons Art Center and Howl Festival. Conversations with Claywoman was featured at The Meltdown Festival in London and continues regularly at Pangea in New York City. IG: @claywomanhello

Crackhead Barney is an anomaly, a coward, a harlot, a whore, and a sidepiece! She or he doesn’t know what the fuck she is doing half the fucking time and you know it and I know it! Shit writing this right here just proves it! But who Gives a FUCK! You don’t give a fuck! I don’t give a FUCK and neither do you! I just flailing my Ass, pUSSY, and Tits around because they are big enough to be in everybody’s faces? Crackhead Barney is not a performer, not a loud mouth, not a provocateur, is bad with words and has no business performing in the streets of NYC!

Gara (they/them) is a performance artist, writer and comedian based in NYC. They started performing in the New York City nightlife scene at 19 and now, 5 years later have shared their stories on many different iconic stages like MoMa PS1, Union Hall, Dixon Place, The Bell House and more!

June Buck is a drag performer and theatre artist. She performs most frequently as her drag persona JUST JUNE. She is a producer of IN LIVING COLOR, a Brooklyn-based drag show presented by Junior Mintt. Inspired by a production of Barney Live she saw when she was 4 and her layman's study of historical materialism, Buck plays with spectacle in an attempt to expand our understanding of what could be possible.

Joanie Drago is a transgender writer, comedian, and clown based in Brooklyn. Before the pandemic she was a house performer at Upright Citizens Brigade, now she makes memes and runs her mouth. Joanie teaches satire and comedy writing for the Kennedy Center Playwriting Intensive and for the Dramatists Guild of America, and her plays have been seen at Pig Iron, Ars Nova, Dixon Place, Actors Theatre of Louisville, and the Edinburgh Fringe. Follow her on instagram at @joaniedrago_unofficial.

Wesley Olivier Graham Garlington (Klondyke) graduated from Sarah Lawrence College in May of 2018 with a Bachelor of Arts in Music, Theatre, and Film. An experimental singer, musical theatre composer, and drag performer Wes performs gender non conforming drag as Klondyke in Brooklyn whiles working toward recording their second musical, Scarecrow. A bit about Klondyke from their personal bio: “Klondyke is an extraterrestrial tragg*t, spawn of a black hole and a supernova, raised by a 4th dimensional rockstar. They hail from a small T4T queer punk rave planet and has (crash) landed on Earth to give SHOOOWS!”

Linda La is an international, multidisciplinary performer, recording artist, writer, teacher, curator, host, and model from the Boogie Down Bronx, New York. Her work infuses elements of music and movement with spoken word and experimental theater. Born out of the NYC Mainstream/Kiki Vogue Ballroom Scene, her experimental sound has been articled in both AFROPUNK and The Fader. Last year, she made her television film debut in the role of Swan on the finale of the hit series POSE on FX. Currently she resides on Munsee-Lenape land, finalizing her first studio recording project set to include original music and poetry. Her work can be found on all streaming platforms and archived at the Brooklyn Museum in the “Nobody Promised You Tomorrow: Art 50 Years After Stonewall” exhibit. Find out more at Lindala.world. Accepting tips and donations via Cash App or Venmo @LindaLaFM

Since the late 1980s, Linda Simpson has been a multi-faceted drag queen as a nightlife promoter, journalist, playwright, actress and game-show hostess. Her photos of NYC’s drag scene in the 1980s and ‘90s are featured in her photo book The Drag Explosion, which is also title of her touring slideshow.

MTHR TRSA, also known as Dylan Thomas is a queer visual artist, photographer and performance artist based in New York City. Dylan is a curator and produces a live series called HOLE PICS, a performance art series that showcases diverse queer performers in Brooklyn, New York. Dylan uses their curation and photography practice as a way to bring visibility and funding back into queer spaces. She loves watching sunsets, unhinged theatre, and orange wine.

Roger Q. Mason (they/them, playwright and voice performer) was recently dubbed by the Brooklyn Rail as "quickly becoming one of the most significant playwrights of the decade."  Their work has been seen on Broadway (Circle in the Square Reading Series); Off and Off-Off-Broadway, regionally, and digitally.  Mason is a proud member of Page 73's Interstate 73 Writers Group, Primary Stages Writing Cohort, and the Dramatists Guild.

David Gonzalez (he/him, sound designer) A passionate musician since childhood, David Gonzalez is an accomplished composer based in Los Angeles whose work has appeared in film, television, stage, and video games. From feature films like Working Man, starring Oscar-Nominee Talia Shire, Peter Gerety (The Wire), and Billy Brown, to short films like Birdwatching, starring Amanda Seyfried, and Emmy Winning web series Break A Hip, David's music enriches and enlivens the pictures on the screen. His work can also be heard on Switched at Birth and How I Met Your Mother, helping to bring these popular small-screen stories to life.

Tahtianna Fermin is an inspiring model , an Ordained Minister; the founder and CEO of Bridges4Life, @tgncbridges4life  www.Bridges4Life.org which works to help teens and young adults on the street and in foster care become responsible, self-sufficient, confident and educated adults. Bridges4Life provides housing, preparation for adulthood involved in the SexTrade specifically Black Trans Sex Workers and Sex Trafficking survivors. Tahtianna provides  prevention services, and assists young people in negotiating aging-out services within the foster care system. Bridges4Life’s works within existing programs and resources to leverage new opportunities for the teens and young adults involved in the program, empowering social change agencies to develop local strategies for urban service, Tatiana is also CEO and chair president of The National LGBTQ Workers Center’s NYC chapter, serving on the Center’s National Board as its New York Liaison. A community activist since 2008, Tahtianna has been a Community Follow-Up Worker (CFW) at Housing Works Inc., a recovery coach and patient navigator at The Alliance For Positive Change, amongst other initiatives, as well as speaking at the Presidential debate in 2008 for Barack Obama, Tahtianna was a key element, in the implementation of hormonal therapy through Medicaid. Tahtianna is a WIFE , a Mother , a daughter and most importantly a sibling of our community.

The Revelator Qween Jean is a New York City based Costume Designer who has designed over 50 shows and counting. She has fully committed her voice to the advocacy of marginalized communities, emphasizing Black Trans people. She is currently among few costuming professionals in the NYC theatre who live their trans identities out loud- while making an effort to ensure she is not the last. Qween founded the Black Trans Liberation in 2020. The organization aims to provide access and employment resources for the TGNC community. Through this work, she has organized community events, protests, and mutual aid drives to denounce the actions of a disenfranchised system and call for an end to racism and white supremacy. She is a firm believer in the preservation and support of Black Trans people and a testament to how one can thrive when adequately paid, supported, and loved. “Hire the girls” is her motto. In 2021 Qween was MOMA PS1’s artist in residency and co-curated Memoriam and Deliverance. This installation called awareness of the last five years of transphobic and fatal violence while celebrating Black Trans leaders in the community. She was also the opening speaker for the March on Washington March on for Voting Rights. Qween has an MFA in Design from NYU Tisch.

Synead Cidney Nichols is a queer poly-disciplinary performance artist & expressionist based in New York City. Her inspiration is deeply rooted in her quest for community healing, self-awareness, and the freedom and creative advancement of queer, black and indigenous people of color. Synead is not bound by genre or stereotype, but bound to the varied experiences we all share as humans. She has appeared in a number of works including award winning independent film Poets Are The Destroyers directed by Nancy Pop, Mercy Mistress executive produced by Maragret Cho, The Shed’s Open Call Series as part of Nia Witherspoon’s Dark Girl Chronicles as well as Drama Desk nominated jazz opera, The Hang.

"You have to act as if it were possible to radically transform the world. And you have to do it all the time."— Angela Y. Davis. This is what inspires her to create.

La MaMa's Squirts gathers some of the most exciting voices from New York City’s queer performance world, across the generations. Over three nights, curator Alexander Paris sculpts the fabric of queer community to pose questions, honor legacies and ignite the present. Join us as we celebrate those who paved the way, and uplift new voices and perspectives from the individualistic, yet multiplistic, Gen Z lens.