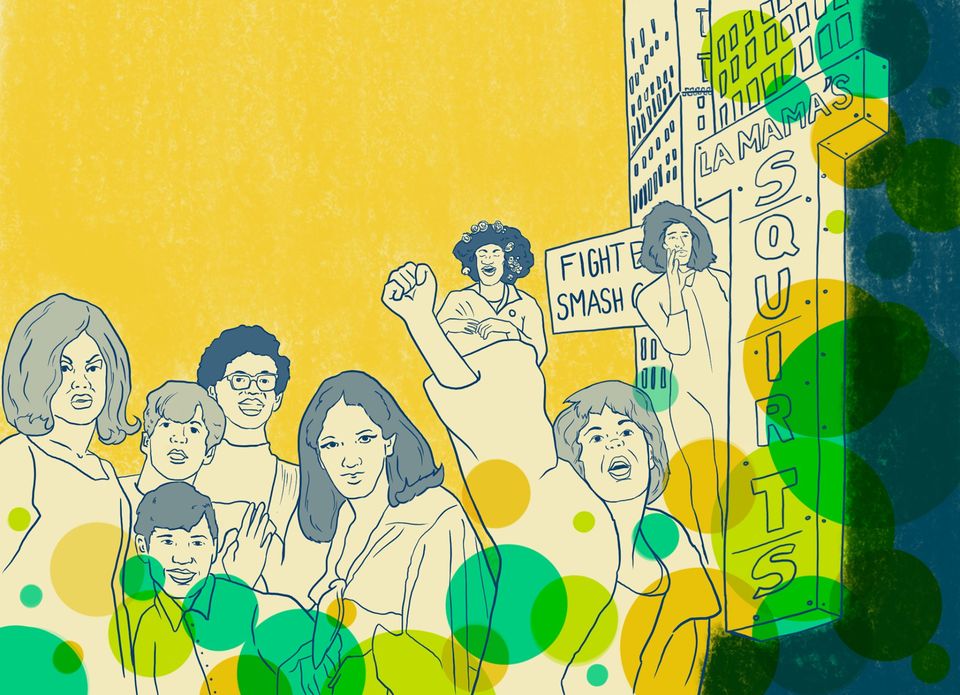 Friday to Sunday at 6PM

Each year, La MaMa’s Squirts gathers the most exciting voices from New York City’s queer performance world, across the generations. This year, three trans women artists with deep community roots will each craft a night of the festival, marking the 50th anniversary of the Stonewall uprising.

Friday, May 31 at 7PM
Curated by Cecilia Gentili

Argentinian-American activist and actress Cecilia Gentili kicks things off with an evening of performance and storytelling by trans artists. Gentili learned about Stonewall under the Argentinian dictatorship of the 70s and 80s, and her curation is inspired by what she learned from U.S. LGBT culture during repressive times. Photo by Serena Jara

Charlene Incarnate curates an all-transgender and non-binary showtunes review. Timeless Broadway material from fraught moments in American history will be reinvigorated by the trans bodies performing today, under a neo-fascist regime in America. As an intergenerational link between queers and dreamers in NYC, musicals help our communities see where we’ve been and where we’re going. Photo by Lia Clay

Originally from Argentina, Cecilia Gentili is a well-known storyteller in NYC. She has also acted in several plays (Jess Barbagallo’s “My Old Man” (Dixon Place), Casey Llewellyn’s “O Earth” (HERE Arts Center)) and was a guest star in “Pose” (FX) where she payed Ms. Orlando. Gentili found her passion for advocacy working as an intern at the LGBT Center. She headed the Transgender Health Program at Apicha from 2012 to 2016, served as the Director of Policy at GMHC from 2016 to 2019, and currently functions as Principal to Trans Equity Consulting defining policy to the benefit of the TGNC/NB community. She was a contributor to “Trans Bodies Trans Selves” and is a board member at Translatina Network. She is passionate about advocating for her community, specifically for trans women with a Latino background, sex work, drug use and incarceration history.

Linda LaBeija is a multidisciplinary artist from the Bronx, NY, whose work explores the complexities of living as a transgender woman of color in today’s America. With origins in both both black America and the English/Spanish-speaking Caribbean, Linda’s transnational experience of living at the intersection of embodied, social, and national borders hones in on the critiques of hegemonic power.  As a performing artist and author, Linda’s work intervenes with confidence, politicized anger, and grace into a symbolic and literal economy which would otherwise render her bound and gagged.

Susy Shock identifies as an “Trans Sudaca Artist”. She was born in Buenos Aires in 1968. She had collaborated in SOY, diversity supplement of the Pagina/12 newspaper and in “Revista Caja Muda” from the faculty of philosophy of Cordoba and many other news outlets. Susy published her first poetry book in 2007, “Revuelo Sur” and in 2011 “Relatos en canecalon” and “Poemario Tranpirado” and in 2014 her record “Bueanvida Y poca vergüenza” came out with great reviews. In 2016, she was honored with the special mention award from the national tango and folklore for her song “Con mi carro voy,” and in 2016 she published “Crianzas” and “Hojarascas.” In 2018 she came out with her latest record “Traviarca” with Banda de colibríes. She travels Argentina and the world with her show of poetry and songs, “Poemarion Trans Pirado”

Julia Rose is a classically trained jazz singer & performer from Philadelphia. Her experiences include dancing professionally for Dance Theater of Harlem, recently being featured on FX Network’s “Pose,” performing in Vienna for the Life Ball and opening a Christmas event at Joe’s Pub. Standing 6’ tall with classic style, her stage persona is larger than life!

Ashley R.T. Yergens is 2018-2019 Jerome Foundation AIRspace Resident at Abrons Arts Center, where his first evening-length performance Prettygirl264264 premiered in November 2018. Please text your favorite emoji combination to him at (507)412-1381. Follow him on Instagram at @ashleyyergens.

From the Lower East Side of Manhattan and The Bronx, Mizz June, the musical persona of NYC based Actor Julienne Brown- got her start in Musical Theater and Activism.  A protégée of luminary public figures Octavia St. Laurent and Miss Major Griffin-Gracy, she was the first out Black Transwoman to be a guest cast member on a daytime soap opera (“All My Children”). She has appeared in music videos and, performed on various well known stages in NYC and around the U.S. (including La MaMa and BAM to name a few). Her latest single(s) can be found here: www.theonetheonlymizzjune.com/music

Banjela Davis is a lazy drag host from NYC. She is the Founder and Co-Chair of the Miss Krayola Pageant, known most notably for her notoriously short-lived yet extremely popular talk show Legends, Statements & Stars! filmed live at La Mama, JACK, and Dixon Place in 2016. Since the overwhelming success of her first foray into media satire, Banjela has retreated from the gaslight of social media to rest, rejuvenate, and rebrand. Banjela Davis returns to Squirts this year a humbled queen grateful to share the stage with black trans female legends in the making. Live episodes of her QTPOC-centered cultural programming coming to a theater near you!

Miss Major Griffin-Gracy is a veteran of the infamous Stonewall Riots, former sex worker, survivor of Attica State Prison and transgender elder and activist. Miss Major has fought for over 40 years to create visibility and equity for trans women of color.

Sasha Shay Maria Washington (Princess Sasha Fierce) was born in Brooklyn, NYC, raised in the Bronx, back in Brooklyn living on my own since age of 18, I am a 32-year-old woman of trans experience of color, been part of the LGBTQ community since the age of 12, been a performer since 18, dream to change the world by fighting for rights, as one speaking for those who can’t, standing up for mental health care and awareness in our community as one we stand. I love hard, care, and believe we all will come to a great understanding.

Gia Jordan is The Violence, a dynamic multi-instrumentalist singer songwriter who could probably kick your ass and would definitely do so if you are deserving of an ass-kicking, but gia jordan does not want to have to kick your ass so be polite and you’re fine:))))

Charlene Incarnate has been performing drag in Brooklyn for 6 years. She enacted her gender transition as a performance art piece on New York drag stages (including La MaMa’s Squirts 2014), and now her performance work centers around the aggressive, dangerous and inherently political nature of living in a transgender body. In the summer of 2017 she was crowned Miss Bushwig and went on to perform at Lady Bunny’s Wigstock in 2018, igniting the headline from Time Out New York “Charlene is taking over the planet”

Remy Black is a performance artist best known for using drag performance, music, and social media to celebrate the beauty, resilience, and queerness of the black experience while critiquing the social structures that enable its marginalization. Currently based in South Florida, Remy is enjoying an extended visit in New York and looks forward to re-experiencing the city that shaped much of her formative creative years.

Image Object is an athlete, a performer, a student of the timeless art of wardrobe styling, and an aspiring cyborg designer. You can find Image online at @image.object on Instagram, and in person teaching an LGBTQ donation based beginner boxing class every Thursday 8pm at Red Planet Muay Thai.

Professional musician and nightlife entertainer, Thesan Pollyanna traverses many dichotomous mediums of art and synthesizes them through multifaceted performance. Distinctive graduate of the Eastman School of Music (Rochester, NY), Thesan Pollyanna pursued degrees in music education and saxophone performance under the tutelage of Professor Chien-Kwan Lin. A native of South Carolina, Thesan attended the South Carolina Governor’s School for the Arts and Humanities (Greenville, SC), where they graduated with both a high school diploma and an arts diploma. Thesan is a former member of the Eastman Wind Ensemble, the Eastman Saxophone Project, and the Bitchin’ Kitchen– an R&B and soul band in which they sang. Thesan has performed for renowned celebrities and artists in both classical and popular music genres, including John Legend, Claude Delangle, Lars Mlekusch, Al Sharpton, Mariano Garcia Jiminez, Darius Rucker, and the Marine Band Saxophone Quartet. Thesan’s accolades include first prize in the 2011 MTNA Empire State Competition, a Performer’s Certificate from the Eastman School of Music, and first prize in the 2014 National Association For Negro Musicians Competition (NANM). Instagram: thesan_pollyanna, Facebook: Thesan Pollyanna or Keenan Montieth

The Helix Queer Performance Network gathers some of the most exciting voices from New York City’s queer performance world, across the generations. Over three nights, three curators sculpt the fabric of queer community to pose questions, honor legacies and ignite the present. Join multiple generations of queer performers as we celebrate the legacy of downtown theatrics and the precocious audacity of the millennial mind.