Sounds Of The Movement 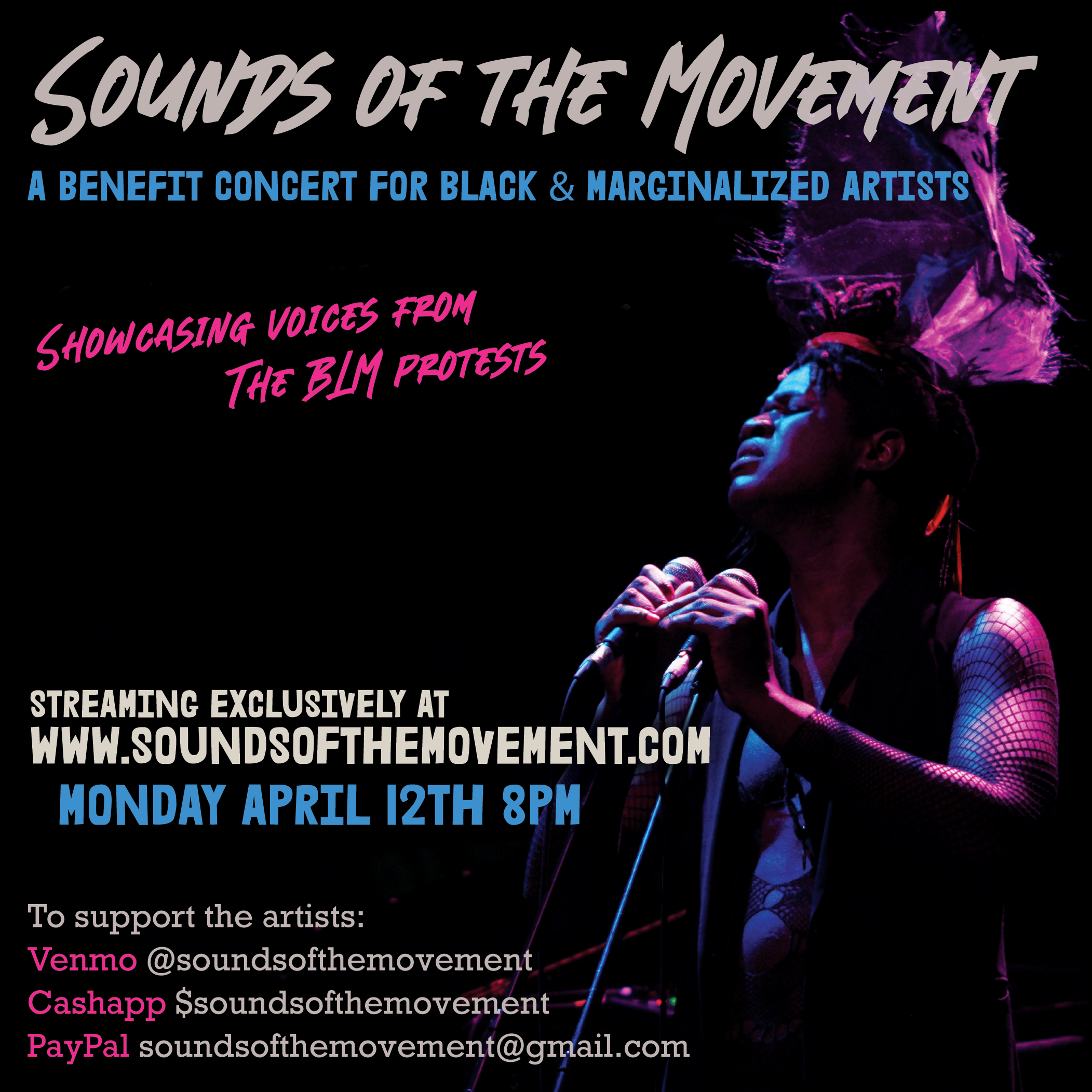 A BENEFIT CONCERT FOR BLACK AND MARGINALIZED ARTISTS

showcasing voices from the BLM protests

Please donate via the payapps to these accounts:

'Sounds of The Movement' is a benefit concert for Black and Brown artists showcasing the incredible talent that has been in the streets through the Black Lives Matter protests of 2020. 'Sounds of the movement' is a collaborative community effort by activists, organizers and members of the Black Lives Matter movement, particularly the Black Trans and Queer lives matter faction. Our mission is to amplify the messages of The Movement for Black lives and create a platform and opportunity for marginalized artists who also dedicate their time and talent to activism. We are not part of a 501(c)3, we do not have a budget or any sponsors supporting this production at this time. We are looking to raise funds for these incredible artists, some of whom are homeless and many are without financial assistance during the covid-19 pandemic that has demolished the live entertainment industry they depend on to make a living.

Please donate via the payapps to these accounts: 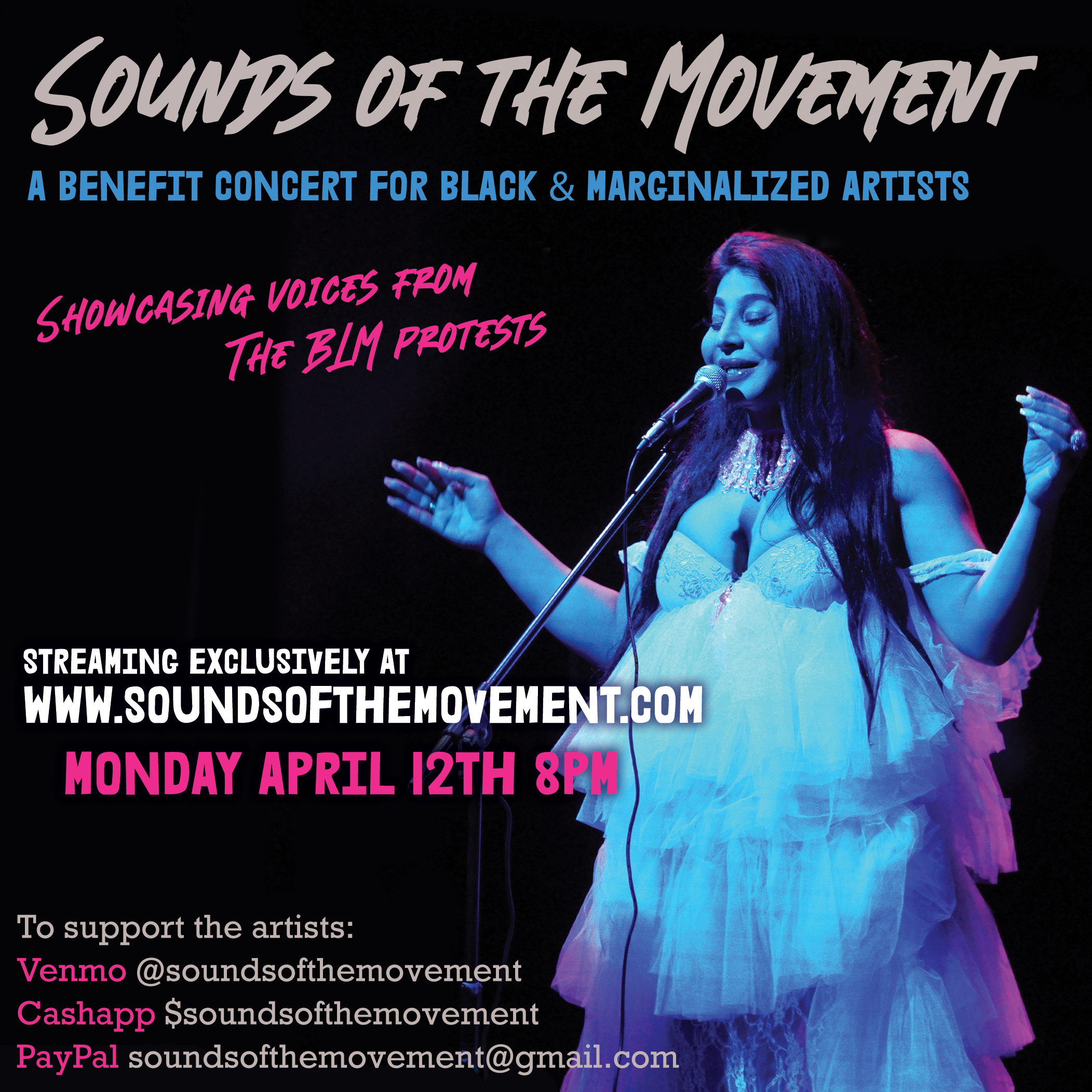 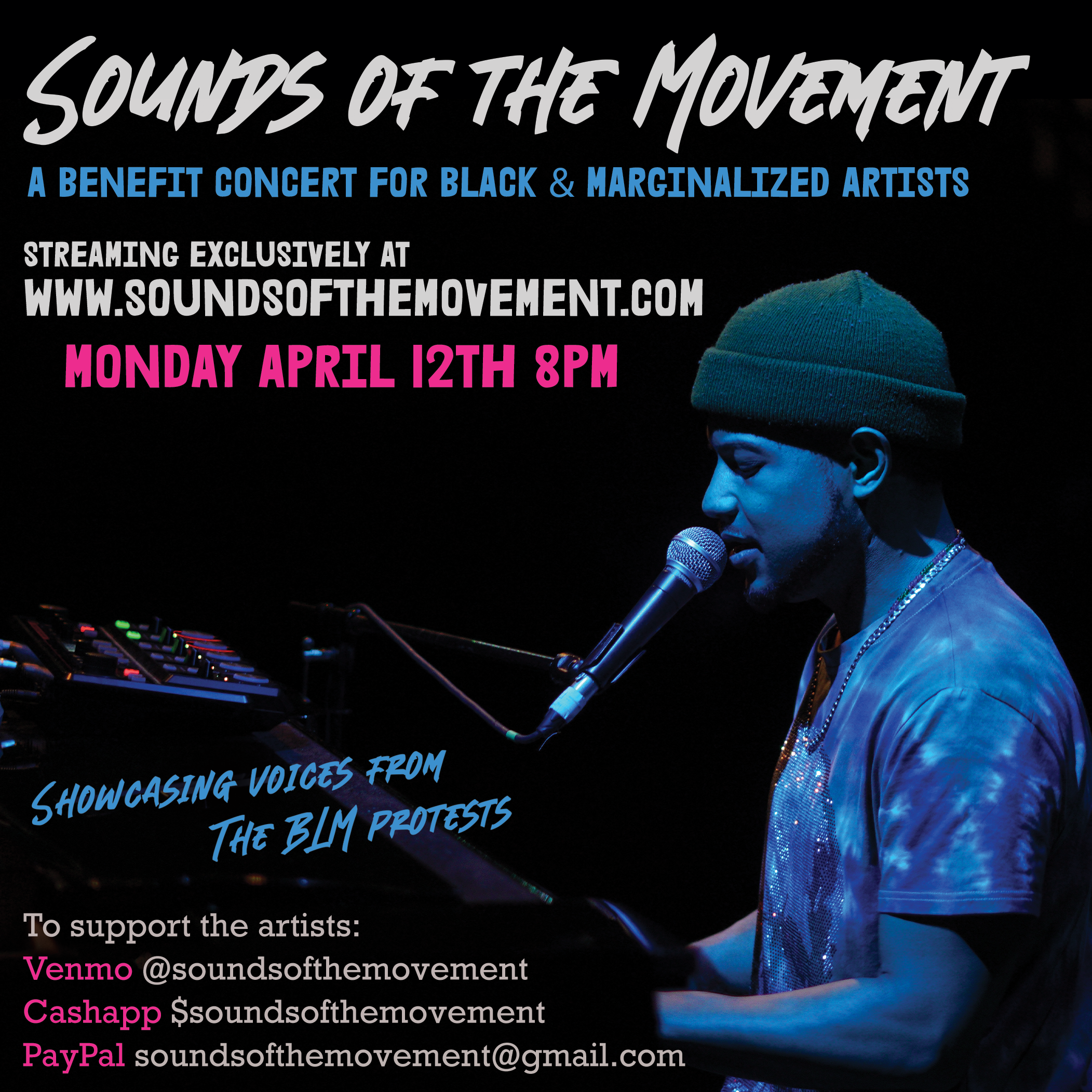 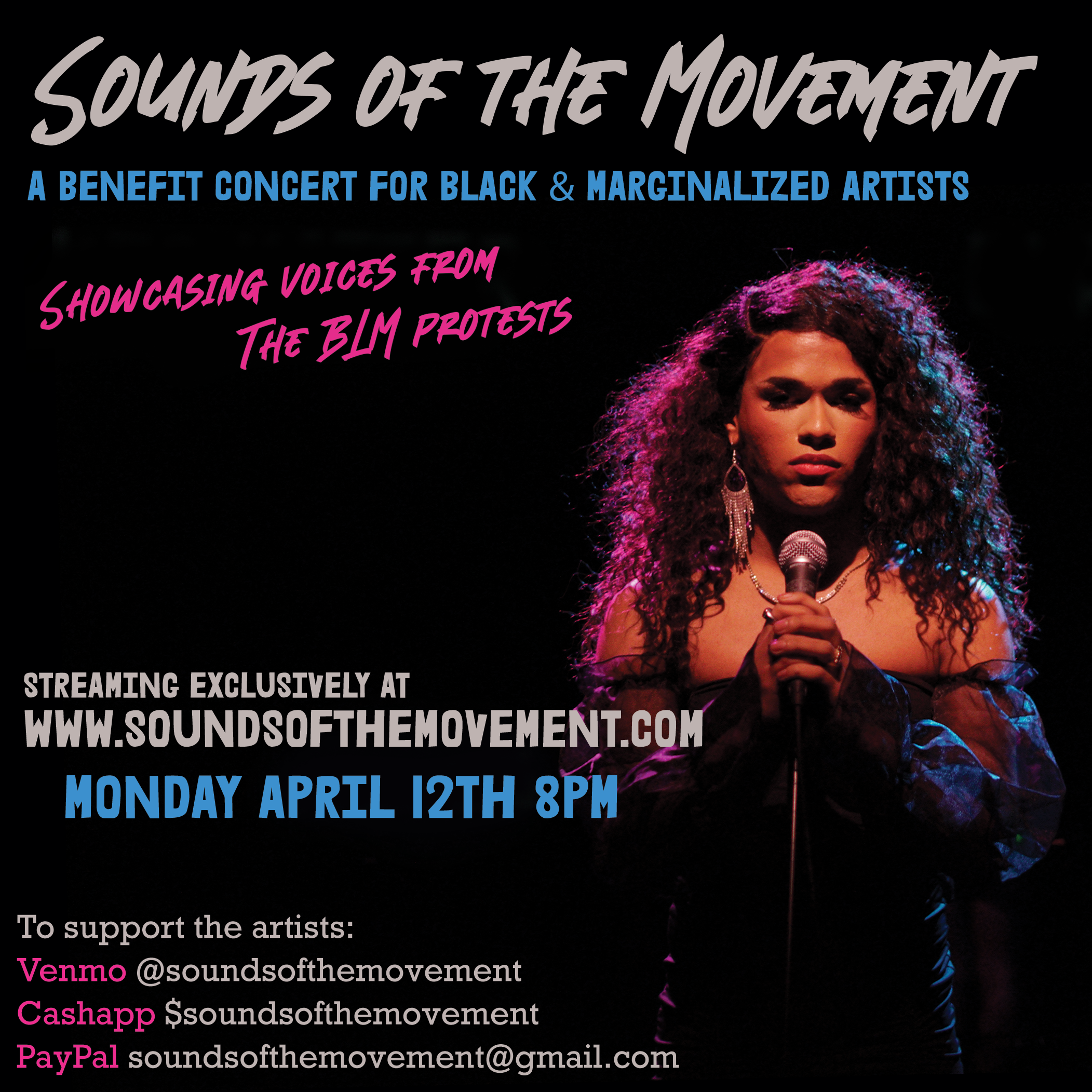 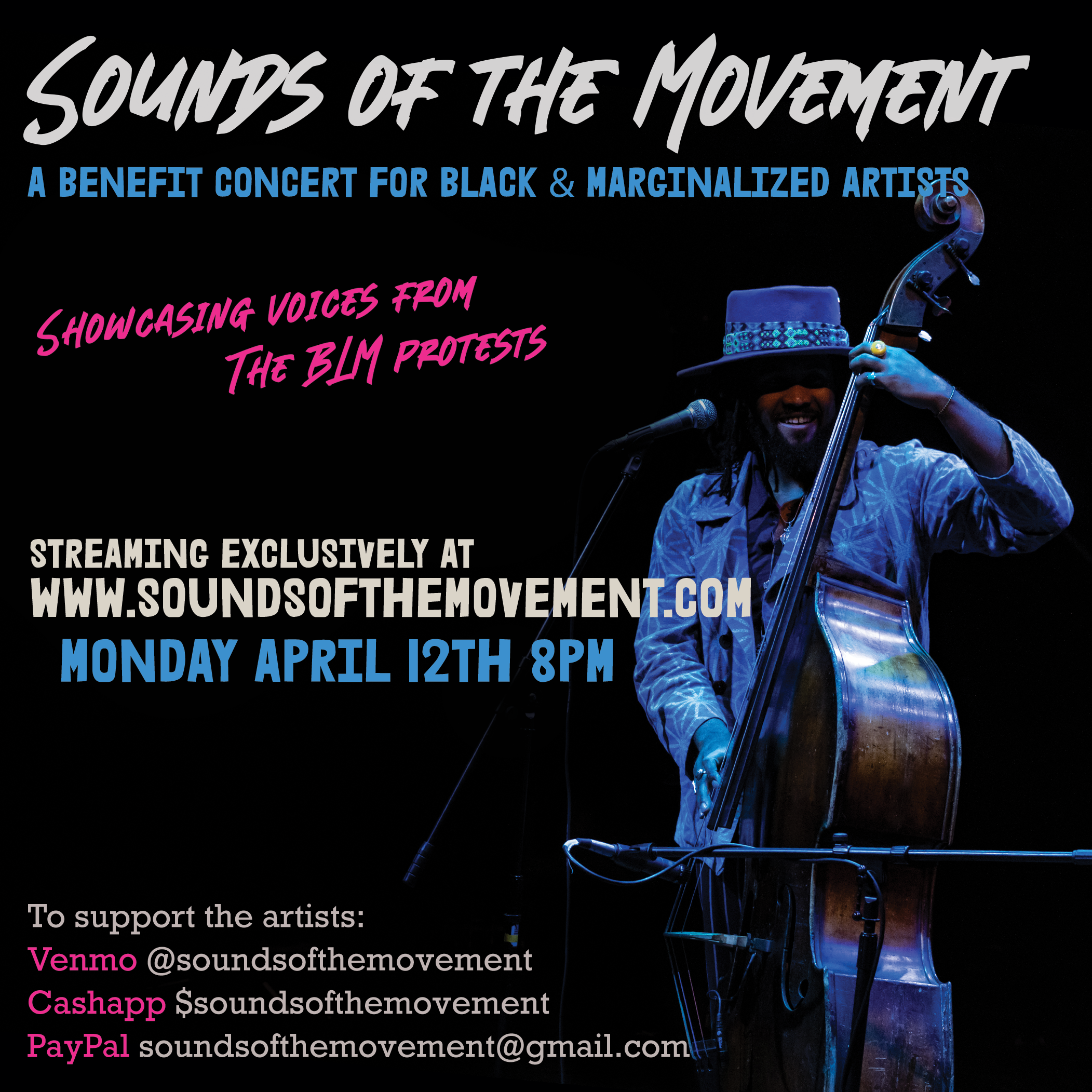 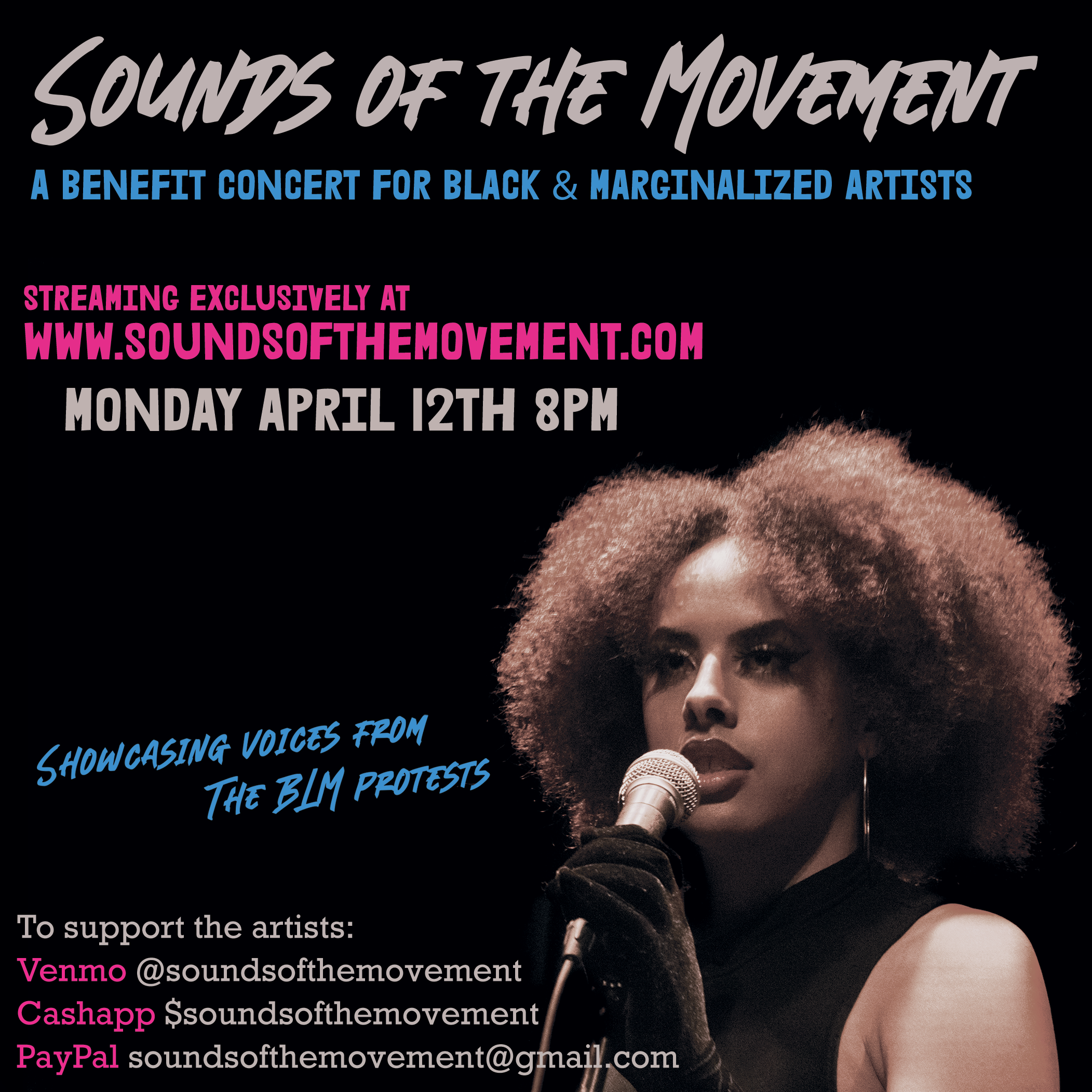 Musician and nightlife entertainer, Thesan Pollyanna traverses many dichotomous mediums of art and synthesizes them through multifaceted performance. A distinctive graduate of the Eastman School of Music (Rochester, NY), Thesan Pollyanna pursued degrees in music education and saxophone performance under the tutelage of Professor Chien-Kwan Lin. A native of South Carolina, Thesan attended the South Carolina Governor’s School for the Arts and Humanities (Greenville, SC), where they graduated with both a high school diploma and an arts diploma. Thesan is a former member of the Eastman Wind Ensemble, the Eastman Saxophone Project, and the Bitchin’ Kitchen-- an R&B and soul band in which they sang. A multi-instrumentalist, Thesan has performed for renowned celebrities and artists in both classical and popular music genres, including John Legend, Claude Delangle, Lars Mlekusch, Al Sharpton, Mariano Garcia Jiminez, Darius Rucker, and the Marine Band Saxophone Quartet. Thesan's accolades include first prize in the 2011 MTNA Empire State Competition, a Performer's Certificate from the Eastman School of Music, and first prize in the 2014 National Association For Negro Musicians Competition (NANM). In 2019, they were featured as a guest artist at the University of Pennsylvania's Gender and Sexuality studies department. Thesan is based in NYC and is saxophonist in ecclectic soul & funk band, "ALONE", as well as Joe's Pub's queer and trans seasonal cabaret, "Daphne Always".

Iman Le Caire is a Transgender Artist, activist and Humanitarian.

Born Ayman Kassem in Cairo (Egypt). She was enjoying a career as a Contemporary Dancer at the Cairo Opera House and a Choreographer when she had to flee Egypt in order to avoid persecution. She moved to the US in 2008 where she was granted political asylum.

Since then Iman has established herself as a prominent performance artist, dancer and fashion designer in New York City.

In 2019 Iman got her first on-screen acting part as Layla in The Shuroo Process movie, written and directed by Emrhys Cooper, and to be released soon.

Her involvement with The Black Lives Matter Movement has inspired her to take her activism further and embark on a humanitarian mission to save Trans people who are persecuted in their home countries, help them escape and find refuge in a trans-friendly country where they will be granted asylum and protection.

Iman makes her debut as a vocalist for 'Sounds of the Movement' with her first song '7 Souls'. Inspired by Sufism and Arabic poetry, her music mixes classic Arabic melodies and rhythms with modern electronic sounds. The lyrics, inspired by Ancient Egyptian wisdoms and beliefs, are about forgiveness and moving forward.

J. Grant Williams is an interdisciplinary performance artist based in South Carolina and New York.  Heavily influenced by nature and spirituality, Williams is a graduate of the University of North Carolina where they studied voice and opera. Williams aka Pimoonchild uses voice and sound as mediums to create, connect and communicate various musical expressions and affectations through the amalgamation of fashion, art and music. As a black queer gender non-conforming artist ( @pimoonchild ), Williams continues challenge the confines of society thorough authenticity and artistic expression.

Ali Mounkary is an actor, performer, and model based in New York. Originally born in Casablanca,Morocco, Ali has used their background and experiences to drive their career. Ali is currently attending Manhattanville College where they are pursuing their BFA in Musical Theater, expecting to graduate in the spring of 2022. Ali is currently continuing their training and actively looking for opportunities. They are so excited to be a part of this project and look forward to future collaborations!

Jaime Cepero is a Queer Afro-Latinx actor, writer, and activist most well known for playing the prickly Ellis Boyd on NBC’s musical drama series SMASH from executive producer Stephen Spielberg. As a writer his music has been featured at venues all over NYC from acoustic concerts in Times Square with BROADWAY BUSKERS summer artist lineup, to full band performances with The Greenroom42’s NEW WRITERS series. His musical ‘Francois & The Rebels’ (a punk rock telling of the 1791 Haitian Revolution) was part of MTF Musicals 4X15 Workshop, Joes Pub New Musicals concert program, and New York Theater Barn’s new works series. He is also the founding member of INTERSECTIONAL VOICES COLLECTIVE, a queer and black lead artist & activist collective, where he has programed and co-organize dozens of political justice rally’s, march demonstrations, and LGBTQIA centered public events.

Russell Hall is an award winning double bassist from Kingston, Jamaica. He was introduced to jazz at the Dillard Center for the Arts directed by Christopher Dorsey. He continued his studies with master bassists Ron Carter and Ben Wolfe at The Juilliard School in New York City. He has been blessed to work with legends such as Edward Norton, Kathleen Battle, Wynton and Branford Marsalis, Barry Harris, Wayne Shorter, Roy Haynes, Dee Dee Bridgewater, Mwenso and The Shakes, Emmet Cohen

Brooklyn based artist ALONE (Alon Geva) is a singer, songwriter, producer and activist also known for his work as a DJ, director, designer and stylist. An innovative self-taught musician, ALONE seamlessly integrates different musical genres into an eclectic mix all his own. Drawing upon the timeless sounds of funk, blues and gospel, his middle eastern roots and his love of electronic music, ALONE serves up a future-throwback sound that is fresh yet familiar at the same time. A staple of the NYC music and nightlife scene, ALONE has headlined concerts at Mercury Lounge, The Bitter End, Rockwood Music Hall, Bowery Electric, Piano’s, drom, C’mon Everybody and was featured at BAM’s(Brooklyn Academy of Music) Pride festival ‘Everybooty’. Unafraid to challenge the prevalent notions of religion, gender and sexuality, ALONE presents an expansive vision of queerness that is natural, unapologetic, and bold. ALONE is also the executive producer and director of ‘Sounds of The Movement’.