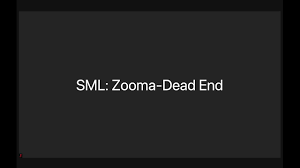 Secret Journey: 40th Anniversary of
Yoshiko Chuma and The School of Hard Knocks 2020-2023
Nobody knows the true story yet…

Audiences can watch the live stream of this performance on Saturday, Feb 13th at 11am EST

This week features Agnė Auželytė. Agnė and Yoshiko met in 2014, in rural Germany, in Stolzenhagen. Driven by curiosity, intuitive understanding and burning desire to connect the dots across time and borders, reoccurring memories, archives and fiction, they continue their conversation till this day.

SML: Zooma - Dead End is the latest chapter of Dead End, The School of Hard Knocks (2020-2023) an ongoing multi-disciplinary performance series conceived, created and performed by The School of Hard Knocks. Assembling a mosaic of films, dance, music, visual art, and narratives, SML investigates ideas of national security, perceived dangers within borders, immigration, and war. Now, in the face of the ongoing pandemic, SML turns to the ephemeral spaces online to forge connections between locations. Using the ubiquitous tools of social conferencing, Zooma: Dead End will enable artists to explore their ideas and communicate to diverse artists and members of the community.

SML: Zooma - Dead End has a regular cast of performers along with hosts, special guests, and artists who are scattered across the world. Musicians, dancers and designers interact, albeit indirectly, as nineteen chapters cross over each other. Parallel incidents of sound, text, and action connecting the cities of New York, Ankara, Madaba, Tokyo, Caracas, Tehran, Hong Kong, Berlin, Los Angeles, Brussels, Kabul, Palestine, and Dakar.

Agnė Auželytė (she/her, 1991) is a Lithuanian-born dance-maker and interdisciplinary performing artist based between Amsterdam and Berlin. She studied Contemporary Dance at The Scottish School of Contemporary Dance (2010-2012), and is currently continuing her studies in choreography at SNDO (School for New Dance Development) in Amsterdam. Auželytė has been performing with Yoshiko Chuma and The School of Hard Knocks (New York) since 2014, and has contributed to works by Hana Lee Erdman and Allison Lorenzen, Kata Kovács and Tom O’Doherty, Kathleen Hermesdorf, and others. She has presented solo works-in-progress at Künstlerhaus Bethanien, Ponderosa Tanzland Festival, Project Space Festival Berlin, and P.O.R.C.H. Extended. Her most recent work — the performance series UNDONE, exploring the idea of embodied sounds in collaboration with Amsterdam-based musician Stephen Doyle — has been supported by Lake Studios Berlin as well as ada studios in the frame of the NAH DRAN Extended performance series (2019). Currently, Auželytė is busy with research for her latest choreographic work, Ana Chrona: Ten Years of Dance Fiction, in collaboration with Ula Liagaitė. Her texts, co-created with Shelley Etkin (Vagittarius Rising), have been published by COVEN Berlin and HYSTERIA magazine. This duo has also presented live performance works at nGbK Berlin, 3AM at Flutgraben, GlogauAIR Berlin, Government Museum and Art Gallery of Chandigarh (India), FRESH Festival (USA), and others. She is a member of the experimental sound projects Otolitos, VROUW!, and Dragons/Doyle, as well as creating sonic solo work under the name Dragons. She is a recipient of the Individual Artist Grant in 2020 from the Lithuanian Council for Culture.

Cutting-edge choreographer/director/instigator/movement-explorer/performer, Yoshiko Chuma continues a lifetime obsession with the mythology of danger. Landing in New York in 1976, Chuma settled in lower downtown Manhattan, labelled as a dangerous place to be at the time. Devoid of the culture and inflation you see before you now, Yoshiko managed to begin her career in lower Manhattan, spanning an impressive 40 year career to date. Creating over 100 productions, including company works, commissions and site-specific events, Chuma is constantly challenging the notion of performance for both audience and participants. Crossing physical and metaphorical borders along the way, quite literally, Chuma has placed herself in danger's way for the sake of art.

Ginger Dolden is a multi-instrumentalist, recording artist, and teaching artist based in Brooklyn New York. Recently, she been seen live on Jimmy Kimmel Live!, Last Call with Carson Daly and has performed at Roulette, Issue Project Room, The Whitney Museum of American Art, The Ace Hotel, La MaMa, Joe's Pub, Jalopy, Barbés, and The American Folk Art Museum. She has worked and recorded with artists including: Anthony Braxton, John Cale, Anthony Coleman, Yoshiko Chuma, Tony Conrad, Holly Miranda, Durand Jones and the Indications, The Hot Sardines and performs with The String Orchestra of Brooklyn and The Chelsea Symphony.

Ryan Leach (he/him) is a New York based actor, writer and comedian originally from Virginia. Film credits include We Demand (Berlinale 2016, BAM), Little Men (Sundance) and The Ducks Migration (OUTFest, Queer Lisboa). Television credits include Comedy Central’s The Other Two and At Home With Amy Sedaris on TruTV. He has performed at La MaMa, HERE Arts Center, Ars Nova, Dixon Place and the New York International Fringe Festival. His comedy can be seen at Broadway Comedy Club, MTV News, StandUp NY, Littlefield, Union Hall, The Bell House, Upright Citizens Brigade, Caveat and more. He is proud to be a co-founder of Awf Magazine -- the first online LGBTQ+ satire publication. Photo by Arin Sang-urai.