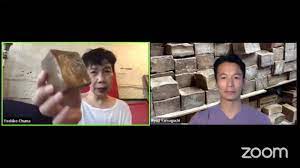 Secret Journey: 40th Anniversary of Yoshiko Chuma and The School of Hard Knocks 2020-2023 Nobody knows the true story yet…

Now, in the face of the ongoing pandemic, SML turns to the ephemeral spaces online to forge connections between locations. Using the ubiquitous tools of social conferencing, Zooma: Dead End will enable artists to explore their ideas and communicate to diverse artists and members of the community.

SML: Zooma – Dead End has a regular cast of performers along with hosts, special guests, and artists who are scattered across the world. Musicians, dancers and designers interact, albeit indirectly, as nineteen chapters cross over each other. Parallel incidents of sound, text, and action connecting the cities of New York, Ankara, Madaba, Tokyo, Caracas, Tehran, Hong Kong, Berlin, Los Angeles, Brussels, Kabul, Palestine, and Dakar.

After some years as an actor in German theater, Peter Pleyer studied dance and choreography at the European Dance Development Center (EDDC) in the art academy in Arnhem/NL. He worked as dancer and choreographic assistant for Yoshiko Chuma (New York) and Mark Tompkins(Paris). Since his studies he has worked closely with the Hungarian dancer Eszter Gal, their choreographies and improvisations have been shown in Holland, Germany, Hungary, Paris and at the New York improvisation festival. In the Netherlands Peter choreographed his first group pieces (selected for the choreography completions Groningen/NL 1994). Since 2000 he lives in Berlin with a strong interest in new methods of training dance and composition, where improvisation plays a central role. Out of his interest in the newly developing dance-research programs in different universities he developed the lecture performance „choreographing books“ (2005) on his view of the difference in the dance research in the US and Europe, and how that can be beneficial for dancer and choreographer. He teaches internationally, his workshop „history in practice“ that focused strongly on the „post-judson-avantgarde“ was held in the alternative dance academy in Poznan, P.O.R.C.H.- Stolzenhagen, the Polish Theatre-Institut, Warsaw, MA Choreography ArtEZ/ Arnhem, HZT-Berlin and Tanzquartier Wien. From 2007-14 he was the artistic director of Tanztage Berlin. In 2014 he successfully picked up his choreographic career with the solo „Ponderosa Trilogy“ (at the Life-Legacy-Project at Tanzhaus NRW and Impulstanz Wien), the group research and choreography „visible undercurrent“ (2014/16) and „cranky bodies dance reset“ (2017). His newest solo „triton tanzt – twisted trident“ about the history of release technique, deconstructing masculinity and the death of his father, was performed in Berlin and Prag. With his partner, Michiel Keuper, a visual composer, he will found „cranky bodies“ a/company in August 2020, despite or because of the difficulties of our times.

Cutting-edge choreographer/director/instigator/movement-explorer/performer, Yoshiko Chuma continues a lifetime obsession with the mythology of danger. Landing in New York in 1976, Chuma settled in lower downtown Manhattan, labelled as a dangerous place to be at the time. Devoid of the culture and inflation you see before you now, Yoshiko managed to begin her career in lower Manhattan, spanning an impressive 40 year career to date. Creating over 100 productions, including company works, commissions and site-specific events, Chuma is constantly challenging the notion of performance for both audience and participants. Crossing physical and metaphorical borders along the way, quite literally, Chuma has placed herself in danger’s way for the sake of art.

Ginger Dolden is a multi-instrumentalist, recording artist, and teaching artist based in Brooklyn New York. Recently, she been seen live on Jimmy Kimmel Live!, Last Call with Carson Daly and has performed at Roulette, Issue Project Room, The Whitney Museum of American Art, The Ace Hotel, La MaMa, Joe’s Pub, Jalopy, Barbés, and The American Folk Art Museum. She has worked and recorded with artists including: Anthony Braxton, John Cale, Anthony Coleman, Yoshiko Chuma, Tony Conrad, Holly Miranda, Durand Jones and the Indications, The Hot Sardines and performs with The String Orchestra of Brooklyn and The Chelsea Symphony.

Ryan Leach (he/him) is a New York based actor, writer and comedian originally from Virginia. Film credits include We Demand (Berlinale 2016, BAM), Little Men (Sundance) and The Ducks Migration (OUTFest, Queer Lisboa). Television credits include Comedy Central’s The Other Two and At Home With Amy Sedaris on TruTV. He has performed at La MaMa, HERE Arts Center, Ars Nova, Dixon Place and the New York International Fringe Festival. His comedy can be seen at Broadway Comedy Club, MTV News, StandUp NY, Littlefield, Union Hall, The Bell House, Upright Citizens Brigade, Caveat and more. He is proud to be a co-founder of Awf Magazine — the first online LGBTQ+ satire publication. Photo by Arin Sang-urai