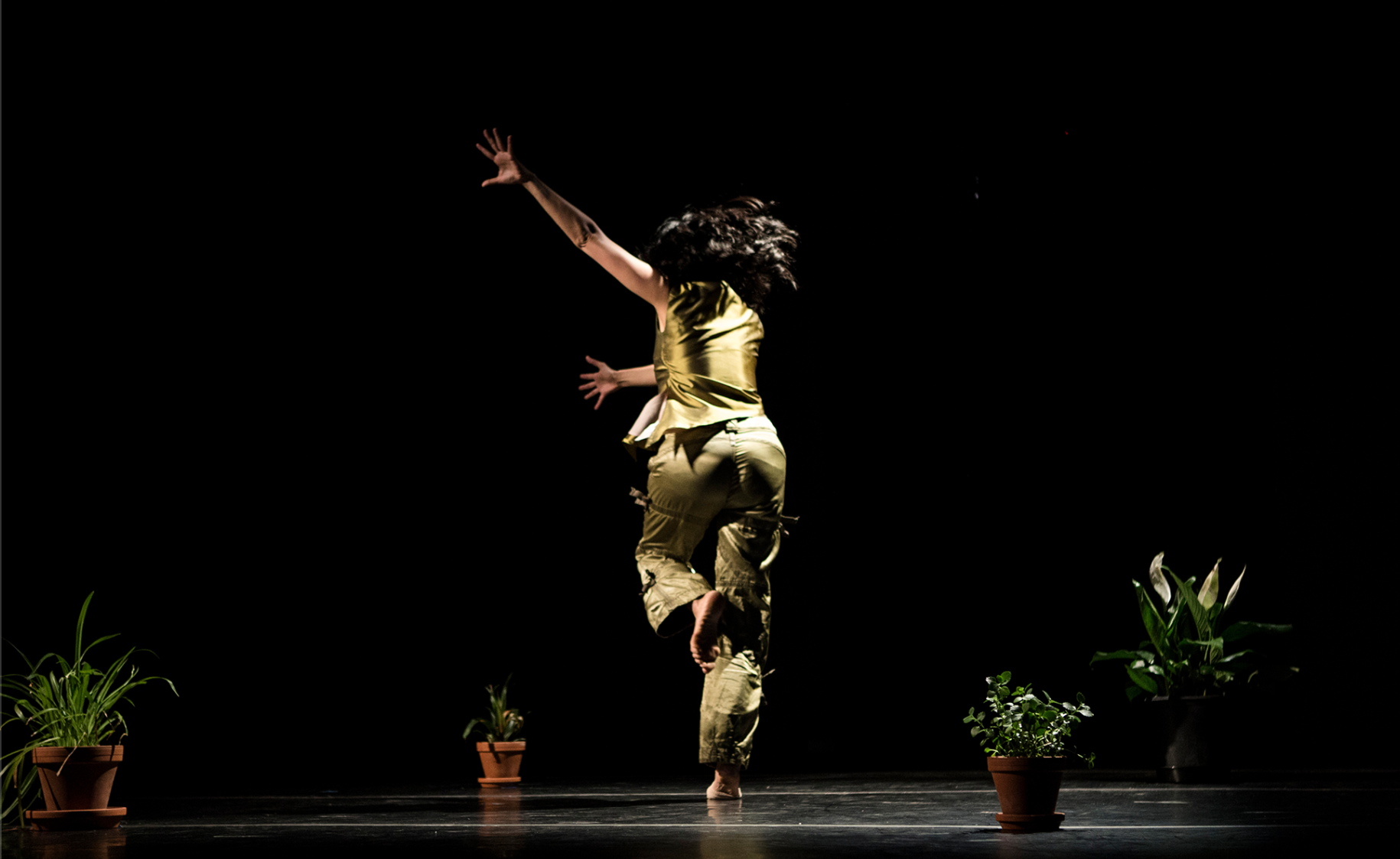 Thursday and Friday at 7PM

O.O.F. is an evolving movement practice exploring ways to cultivate alternative emotional states to the pervasive anxiety spawned by xenophobia and our current political moment. Parijat asks, what processes can I create to invoke new energies? The performance features a collage of news audio and music by experimental vocalist Samita Sinha, composer Seth Warren-Crow, and Gujarati folk singer Hemant Chauhan.

Station II Station new work by choreographer & performer Paz Tanjuaquio, travels through stations of the mind – with spoken word by George Emilio Sanchez, visual design & sound by Todd B. Richmond. A journey that takes the solo dancer across visual fields, the piece explores movement inspired within changing landscapes. Incorporating dance “on the road”, from abandoned gas stations to a conceptual city, the choreography is at the crossroads of dance and design – a synthesis of movement, text, film, sound, and colors.

Leaning On is a work by Angie Pittman that continues to investigate leaning as a necessary action that has always been in conversation with Black liberation. Her solo body of work investigates what resilience looks like through embodied African Diasporic performative practices. Using the hymn “Leaning on the Everlasting Arms” as a point of departure, this work specifically investigates her experiences of praise dancing in her church as a child.  In this work, Angie lives in the connection of her feet to the ground coupled within the context of never really knowing where home is. Thinking of herself as being destined to be a sixty year old aunty, leaning on explores speaking deep truth from a place of love while also having the space to say “go ask yo’ mama”. This is an expansion of the work presented by Danspace Project’s Dancing Platform Praying Grounds: Blackness, Churches, and Downtown Dance.

Paz Tanjuaquio is a choreographer, performer, and visual artist, based in NYC since 1990. Her work has been presented by 92Y Harkness Dance Center, Fisher Landau Center for Art, La MaMa Moves, Danspace Project, PS 122, among others; nationally, at Operation Unite in Hudson NY, San Diego Trolley Dance, American Dance Festival Int’l Screen Dance; and internationally at residencies in Cambodia, Japan, Korea and her birthplace, the Philippines. Recent awards include Dance/NYC’s Dance Advancement Fund, made possible by the Ford Foundation, National Endowment for the Arts, and is a member of NYS DanceForce since 2008. Paz received her MFA in Dance from NYU Tisch School of the Arts, and BA in Visual Arts from UC San Diego. As a dancer, she has performed for Dean Moss, Molissa Fenley, Carl Hancock Rux, Marlies Yearby, among others. In 2000, she co-founded TOPAZ ARTS, Inc. with Todd B. Richmond – a nonprofit organization and creative development center for contemporary dance and visual arts. www.topazarts.org

Todd B. Richmond, visual artist, composer and co-founder of TOPAZ ARTS, received his MFA at Otis College of Art & Design, and CalArts ; BA from City College of New York in Music & Audio Technology with Film Studies, where he received the ASCAP Foundation Warner/Chappell Award. As a visual artist, his large-scale paintings and installations have been shown in four solo exhibitions and numerous group shows in NYC & Los Angeles, and was artist assistant to Richard Artschwager from 1990-95. He has collaborated with Paz Tanjuaquio since 1994, forming TOPAZ ARTS, Inc. together in 2000. www.topazarts.org

George Emilio Sanchez is a writer, performance artist and educator. He has received two New York Foundation for the Arts Fellowships in Performance Art/Emergent Forms, a Rockefeller MAP Grant and is a Fulbright Scholar. As well as serving as chairperson at the City University of New York’s College of Staten Island Performing and Creative Arts Department, he also is the Performance Director of the Hemispheric Institute’s Emergenyc performance project that aims to explore the intersection of arts and activism.

Angie Pittman is a New York based Bessie award-winning dance artist, dance maker, and dance educator. Angie has performed her dances at Gibney Dance, BAAD!, Movement Research at Judson Church, Triskelion Arts, STooPS, The Domestic Performance Agency, The KnockDown Center, The Invisible Dog, Danspace Project, and Krannert Center for the Performing Arts (Illinois). Angie is currently working as a collaborator and dance artist with Ralph Lemon, Donna Uchizono Company, and Stephanie Acosta. Angie has had the pleasure of dancing in work by Tere O’Connor, Jennifer Monson, Anna Sperber, Kim Brandt, Tess Dworman, Antonio Ramos, Jasmine Hearn, and others. She holds a MFA in Dance and Choreography from the University of Illinois at Urbana-Champaign with a graduate minor in African American Studies. She was a 2015 DanceWEB scholar for Impulstanz Dance Festival in Vienna, Austria and is a 2016-2018 Artist-in-Residence with Movement Research. Her work has also been supported by a residency at Tofte Lake Center. Angie’s work resides in a space that investigates how her body moves through ballad, groove, sparkle, spirit, spirituals, ancestry, vulnerability, and power.