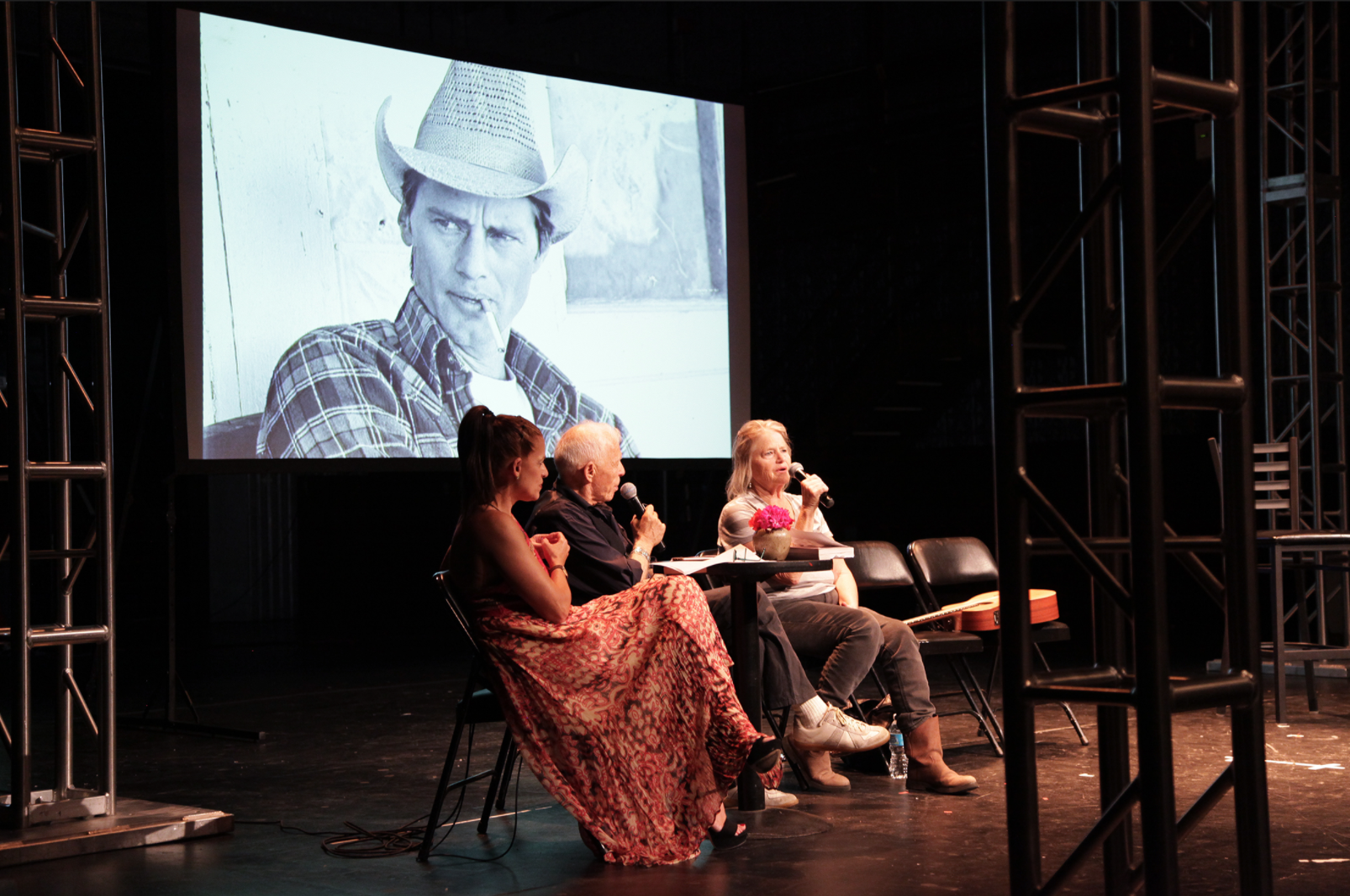 La MaMa will celebrate Sam Shepard’s life and career with live panelists, video tributes and the presentation of rare footage and photos
in the Ellen Stewart Theatre.

Angelina Fiordellisi co-founded and established Cherry Lane Alternative as the company in residence in 1997, creating a number of new play development programs including the Obie Award-Winning Mentor Project, entering its 20th season. Garnering numerous awards and nominations, she has produced over 100 plays. As a Co-Producer on Broadway, she won the Tony, Drama Desk, Outer Critics Circle and Drama League Awards for Edward Albee’s Who’s Afraid of Virginia Woolf? and a Drama Desk Award for The Realistic Joneses by Will Eno. She spent 8 seasons with the New Harmony Project, 4 seasons with Carnegie-Mellon Showcase of New Plays, New York Stage and Film, Labyrinth Theatre Co. and the Eugene O’Neill Theater Center. As an actress, Angelina has played on Broadway, Off-Broadway, national tours and regional theaters. She is married 30 years to Matt Williams and has four children, Matisse and Victorien Mulliez, Emily Farr and Fred Emerson Williams.

Joyce Aaron Funk is an actor, director and teacher. She is a graduate of The Neighborhood Playhouse where she studied with Sanford Meisner and Martha Graham. She received an Obie in 1975/76 for her performance in Acrobatics which she directed and co-wrote with Luna Tralo. She was a member of the Open Theater for many years, working closely with Joseph Chaikin and touring internationally. She lived and worked with Sam Shepard after he cast her in his first play, Up to Thursday, at the Cherry Lane Theater. She was in the original production of America Hurrah by Jean-Claude van Itallie and played it at the Royal Court Theater in London. She worked with Peter Brook at the Bouffes in Paris and Jerzy Grotowski in Denmark. She lived in Amsterdam for a number of years where she taught and directed in the Dutch Theater and TV and ran her own private workshops. In 2002 she performed in Happy Days by Samuel Beckett, directed by Joseph Chaikin at the Cherry Lane Theater. Working with Joseph Chaikin was a source of unending inspiration.

Cary Gant has been a proud member of the GJRT since 2001. In addition to the numerous productions he’s performed in as a company member, Cary was privileged and honored to play the role of Cheyenne in Mr. Shepard’s Tooth of Crime (2006) George Ferencz (Dir,). Other credits include: Robeson with Tony winner Chuck Cooper and Adam Rapp’s Nocturne among many others. I will forever love & miss my oracle/mama Ellen Stewart. Peace & light to all.

Mike Gorman is the newly appointed ‘Playwright in Residence’ at La MaMa Theater in NYC. He makes his home in Maine and New York. He is also the founder and Director of The Forty Hour Club, his current production company, and was co-creator ofvanf The Fabulous Giggin’ Bros.- a performance troupe originated at Clark University in Worcester, MA and the island of Vinalhaven, ME. Mike is currently working on a trilogy of plays called The Honor and Glory of Whaling that deals with the issue of opiate addiction in the commercial shipping community of New England. All three plays have been previously produced at La MaMa and published with ITN (indietheaternow). An epic production of the full trilogy is scheduled for 2018 in The Ellen Stewart Theater at La MaMa. Visit fortyhourclub.com for a full history and recent news of Mike’s work.

Michael Bowen Horn is the Producing Director of The Michael Chekhov Theater Company, which having been given permission by Mr Shepard went on to produce all of his plays. Michael knew Mr Shepard through his Mother who was a member of the Open Theater in the 60s. Sam came and spoke for a number of hours at the Chekhov theater about his plays and the state of the world. He was a kind, warm, brilliant, approachable, passionate man.

Jean-Claude van Itallie, a Belgian-born Holocaust survivor, wrote the landmark 1960’s anti-Vietnam War trilogy of short plays America Hurrah. He was an early La MaMa and Caffe Cino playwright, and Ensemble Playwright of Joe Chaikin’s Open Theatre with whom he wrote The Serpent. Jean-Claude’s over thirty plays include: War, Almost Like Being, I’m Really Here, Tibetan Book of the Dead, Bag Lady, The Traveler, Ancient Boys, Fear Itself, Light, and much produced American translations of Chekhov’s major plays. In 2012 at La MaMa he performed his one person show Confessions and Conversations, directed by Rosemary Quinn. Jean-Claude is the author of The Playwright’s Workbook and Tea with Demons: games of transformation. His newest play is The Fat Lady Sings. He lives on an old farm in Western Massachusetts where he teaches performance/writing/meditation workshops and directs the Shantigar Foundation for Culture and Contemplation.

Bob Jewett is a musician and songwriter who lives in Brooklyn. Bob was the Musical Director of Tooth of Crime directed by George Ferencz at La MaMa.

Wayne Maugans played the role of Stu in the revival of Sam Shepard’s Chicago during the 1996-97 season at Signature Theatre Company, directed by Joseph Chaikin. He also had the honor of working with Mr. Chaikin and Mr. Shepard on a workshop of The Late Henry Moss. Wayne is the Founding Artistic Director of Voyage Theater Company.

Anne Militello is a lighting designer and long-time collaborator and friend of Mr. Shepard. She met Mr. Shepard while working at the Magic Theater in San Francisco in the late 70’s. He subsequently introduced her to Ellen Stewart from La MaMa, where she became the resident designer. With Mr. Shepard as the director, she designed the original productions of A Lie of The Mind, Simpatico, States of Shock and The Late Henry Moss. She designed the original production of Tooth Of Crime – Second Dance in collaboration with Bill Hart and Mr. Shepard. She also designed The Unseen Hand with Tony Barsha, Pecos Bill with O-Lan Jones and Tongues with John Densmore at LaMaMa. She currently resides in Los Angeles where she designs theatrical and architectural projects with her company Vortex Lighting and is the Head of Lighting Design Programs at CalArts.

Charles Mingus III is recognized as one of America’s most gifted and versatile artists. A native of Los Angeles, California, his work is a part of the collections of such distinguished collectors as Daniel Filipacchi, Ivan Karp, the Estates of Larry Rivers, Willem de Kooning, Baroness de Koenigswarter Rothschild and Allan Stone. Additionally, Mingus’ work is represented in corporate collections such as Fort Mason Capital, LLC in San Francisco, also showing at the Allan Stone Gallery for over twenty years. After studying with master calligrapher Shiro Ikagowa,  Mingus, son of the legendary bassist and composer, moved to Manhattan and developed his skills in metal spinning, sculpture and environmental art. He also extended his multiple talents to include playwriting lamming making, and animation. His plays and writings have been produced at Joseph Papp’s Public Theater, La MaMa, The Lee Strasberg Theatre Institute, Dixon Place, The Kraine and Theater for the New City.

Clea Rivera is an actress and playwright. Both of her solo shows, Food Of Life and No Vacancy premiered at La MaMa’s Poetry Electric series. Her short one-act play Bistro Blues was produced in Los Angeles in 2016 as part of the Tiny Rhino series. She has acted extensively in regional theatre including roles at the Denver Center, Missouri Rep, and Merrimack Rep. NYC roles include performances in the Women’s Project world premiere of Maria Irene Fornes’ The Summer In Gossensass, A Wrinkle In Time at Lincoln Center Institute, The Fox which she also co-produced at the Gene Frankel Theatre, and Ralph Lee’s Mettawee River Theatre Company. She and Harry Mann are frequent collaborators, having created the performance piece The Bard And The Blues among other projects.

Sandy Rogers is a country blues songwriter singer known for the Fool for Love movie soundtrack, Fool for Love on Reservoir Dogs soundtrack, songs in many movies, and two self produced CDs Green Moon and Wonderin. “But mostly I’m Sam’s sister, coming to see people I haven’t seen for years and to meet Sam’s folks from that time in New York.”

Leslie Silva has worked extensively in television, film, and theater for over 25 years. She can be seen in recurring roles on Shades of Blue with Ray Liotta (NBC) and The Looming Tower with Bill Camp (Hulu). Leslie played the role of Joy in Sam Shepard’s Chicago during the 1996-97 season at Signature Theatre Company, and is honored to be part of this celebration of Mr. Shepard’s artistry.

Mia Yoo became La MaMa’s Artistic Director in 2009. La MaMa’s founder, Ellen Stewart, mentored Mia as an arts leader under the auspices of Theatre Communications Group’s New Generations Future Leaders Program, cooperatively designed by the Doris Duke Charitable Foundation and the Andrew W. Mellon Foundation. Mia assisted Ellen for over twenty years and has been a member of the Great Jones Repertory Company since 1996. As a member of the Great Jones Rep, Mia has performed in many shows, including Fragments of a Greek Trilogy, Mythos Oedipus and most recently Pylade. She also acted in Andrei Serban’s Pericles at the American Repertory Theatre, and in the Royal Shakespeare Company’s Tantalus. In 2006, along with Nicky Paraiso, Mia created the La MaMa Moves! dance festival.

Michal Gamily (Director/Curator of Coffeehouse Chronicles) is an Israeli born actress, activist, producer and director. Michal Gamily was 19 years old when she refused to serve in the Israeli army in the occupied territories. She has worked as an actress in film, TV and onstage in both Israel and the United States. For the last 22 years, Michal has worked for La MaMa as an actress, producer and archivist. Founder of No Visa Productions, Michal produced the Contemporary Israeli Dance Festival at La MaMa. Her most recent project Benghazi Bergen-Belsen was presented last season at La MaMa. She has been the Series Director of the Coffeehouse Chronicles for the past 4 years.

“Jessica Lange, with Hannah Shepard and Samuel Walker Shepard – the children, now grown, that she had with Sam Shepard – entered the Ellen Stewart Theatre quietly as an audience of age-burnished talent from the electrifying free-form heyday of off-off Broadway theater waved greetings, blew kisses, shared memories and settled in Sunday for an afternoon tribute to the actor and playwright, who died July 27 at 73.”

La MaMa to Pay Tribute to the Late Sam Shepard