Coffeehouse Chronicles #144: Charles Ludlam and the 50th Anniversary of The Ridiculous Theatrical Company 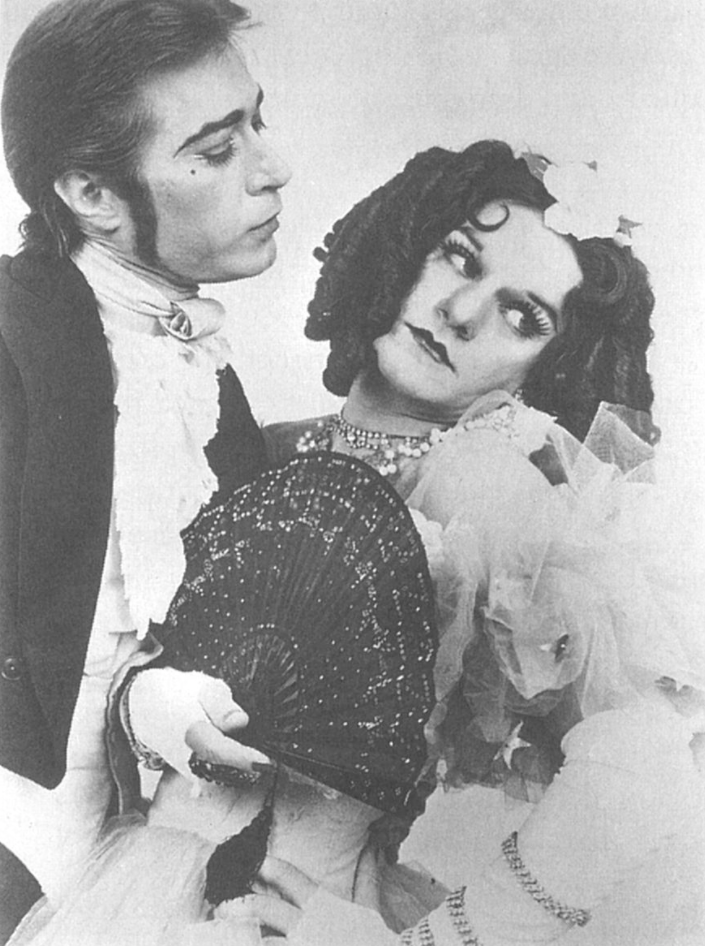 La MaMa will celebrate Charles Ludlam and the Theatrical Ridiculous Company’s  legacy and work with live panelists, video tributes
and the presentation of rare footage and photos in the Ellen Stewart Theatre.

RICHARD CURRIE joined the Ridiculous Theatrical Company in 1972 as a lighting designer for Eunuchs of the Forbidden City.  He continued to light almost every show for the next  25 years.  As an actor he created roles in Corn, Camille, Hot Ice, Der Ring Gott Farblonjet, Christmas Carol and The Enchanted Pig.

SEAN F. EDGECOMB received his Ph.D. in Drama from Tufts University in 2009 and is an Assistant Professor of Drama at the College of Staten Island and also teaches into the Ph.D. program in Theatre at the CUNY Graduate Center. Prior to coming to CUNY he served as Director for the Bachelor of Creative Arts and as a lecturer in drama at the University of Queensland, Australia. Sean’s scholarly work focuses primarily on LBGTQ+ oral histories and ethnography with a particular interest in how global queer cultures and performances migrate and intersect. He has published in a variety of journals including Theatre Journal, PAJ, Theatre Survey, Contemporary Theatre Review, Partake and The Gay and Lesbian Review and edited collections from Palgrave, Routledge, and CESI. His work has been translated and republished in Polish, Croatian and Serbian. His first book, Charles Ludlam Lives! Charles Busch, Bradford Louryk, Taylor Mac and the Queer Legacy of the Ridiculous Theatrical Company was recently released from the University of Michigan Press. He is working on his second book, A Queer Bestiary, which considers contemporary queer performances that include anthropomorphism and animal symbolism.  With David Roman and Dan Venning, Sean is currently co-editing a scholarly collection on Taylor Mac’s 24 Decade History of Popular Music Marathon. He is the recipient of a Dean’s Research Award, and RF CUNY Book Completion Award and spent last spring as an FFPP Diversity Writing Fellow.

JOHN JESURUN is a playwright, director and media artist. Since 1982 he has contributed text, direction and design for over 30 pieces including: CHANG IN A VOID MOON, EVERYTHING THAT RISES MUST CONVERGE, SNOW, the media trilogy: DEEP SLEEP/WHITE WATER/BLACK MARIA. His fellowships include NEA, MacArthur, Rockefeller, Guggenheim, Asian Cultural Council and Foundation for Contemporary Arts. Past projects include FAUST~HOW I ROSE at BAM, PHILOKTETES at Soho Rep, STOPPED BRIDGE OF DREAMS at La MaMa, Jeff Buckley video “Last Goodbye”, Harry Partch’s opera “Delusion of the Fury” at Japan Society. His webserial SHADOWLAND can be seen on Vimeo. Future projects include new episodes of SHADOWLAND and CHANG IN A VOID MOON, “Distant Observer” a collaboration with Japanese playwright/director Takeshi Kawamura at La Mama in March 2018. Website:johnjesurun.googlepages.com

DAVID KAUFMAN is a New York theater critic since 1981, he is currently contributing reviews to Theaterscene.net. As an author, his first book, “Ridiculous! The Theatrical Life and Times of Charles Ludlam,” won the LAMBDA Literary Award for Biography and the Theatre Library Association Award for Outstanding Theatre Book of the Year. His second book, “Doris Day: The Untold Story of the Girl Next Door,” became a New York Times Bestseller, and his latest is “Some Enchanted Evenings: The Glittering Life and Times of Mary Martin.”

Sometimes Taylor acts in other people’s plays (or co-creations). Notably: Shen Teh/Shui Ta in The Foundry Theater’s production of “Good Person of Szechwan” at La Mama and the Public Theater, Puck/Egeus in the Classic Stage Company’s “A Midsummer’s Night Dream”, and in the two-man vaudeville, “The Last Two People On Earth” opposite Mandy Patinkin and directed by Susan Stroman. Mac is a MacArthur Fellow, a Pulitzer Prize Finalist for Drama and the recipient of multiple awards including the Kennedy Prize, a NY Drama Critics Circle Award, a Doris Duke Performing Artist Award, a Guggenheim, the Herb Alpert in Theater, the Peter Zeisler Memorial Award, the Helen Merrill Playwriting Award, 2 Bessies, 2 Obies, and the one judy is most proud to be associated with, an Ethyl Eichelberger Award.  An alumnus of New Dramatists, judy is currently a New York Theater Workshop Usual Suspect and the Resident playwright at the Here Arts Center.

LOLA PASHALINSKI is a founding member of The Ridiculous Theatrical Company where, with writer/director Charles Ludlam, she created 17 roles in 13 years. She received two Obie awards for her work with the company. Since leaving the Ridiculous in 1980, Lola worked extensively Off-Broadway and regionally in productions directed by Lee Breuer, Richard Foreman, JoAnne Akalaitis, Les Waters, Anne Bogart, David Gordon and Neil Bartlett, among others. With her life-partner Linda Chapman, she wrote and performed GERTRUDE AND ALICE: A Likeness to Loving, receiving her third Obie in 2000. Lola made her Broadway debut in FORTUNE’S FOOL with the late Alan Bates. She’s appeared in many films and on television, including most recently EXTREMELY LOUD AND INCREDIBLY CLOSE directed by Stephen Daldry