Reflections of Native Voices 2022: Under Construction 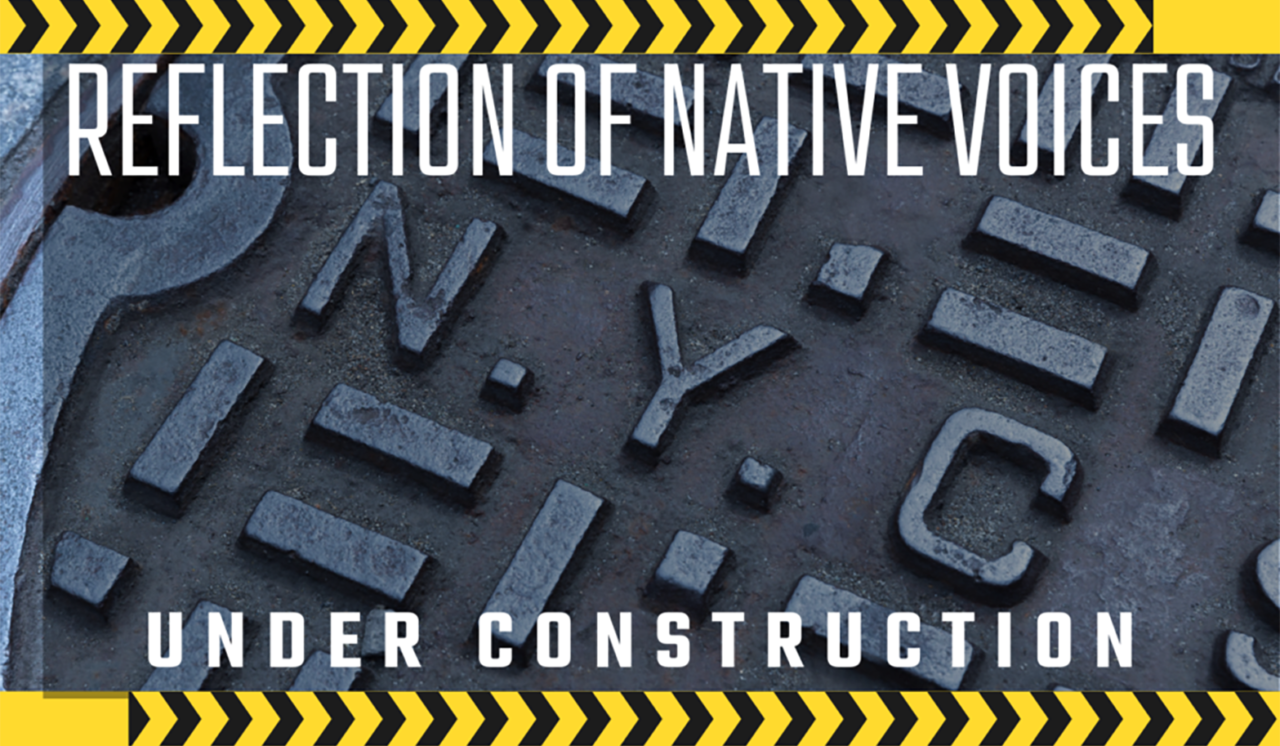 Get a festival pass!

Safe Harbors NYC (SHNYC) is proud to present our third annual Reflections of Native Voices Festival, a week-long festival featuring new pieces under construction with our core ensemble of Native artists. In partnership with New York Theatre Workshop and LaMAMA ETC, we present three solo workshopped pieces to be featured and showcased by Murielle Borst-Tarrant (Kuna/Rappahannock), Nic Billey (Choctaw) and Henu Josephine Tarrant (Kuna/Rappahannock, Hopi, Ho-Chunk), with a special streaming production  of He Leo Aloha in partnership with the University of Hawai’i at Manoa.

Amber Ball (Dakubetede, Shasta, Modoc, Klamath) is a citizen of the Confederated Tribes of Siletz, theatre artist, community advocate, passionate programmer and coordinator committed to serving and creating community through the arts. As a director Amber’s work has most recently been seen in the Reflections of Native Voices Festival with Safe Harbors NYC. Co-Directing a short film, Tipi Tales from the Stoop, by Murielle Borst-Tarrant. Society Theatre Company’s “Cheap Date Series,” In the Margin Theatre’s “InstaNovelas”, and Oregon Contemporary Theatre’s “Northwest 10 Festival.”  This past year Amber was part of the Bridge Program Cohort with the National New Play Network and produced the inaugural New American Theatre Festival in partnership between In the Margin and B St Theatre. She also serves as a community advisor for Ilioo Native Theatre company. Amber’s work centers community forward and intergenerational learning in collaboration with Native communities. She has presented her work and methodology at the Oregon Indian Education Association Conference. Appeared as a special guest for Pangea World Theatre’s First Peoples Gathering. She has presented at the University of Oregon, California State University, Native American Youth and Family Center, Portland State University’s Native American Student and Community Center, Confederated Tribes of Siletz Youth Summit and Southern Oregon University. Additionally Amber was awarded the “Community Mentor Award,” from Southern Oregon University’s Native American Studies Department. Amber is the current Program Director for Safe Harbors NYC and Executive Director of In the Margin.

‍Murielle Borst-Tarrant (Kuna/Rappahannock Nations) is an author, playwright, director, producer, cultural artist, educator, and human rights activist. She studied acting  at HB STUDIOS. She is also a graduate of Long Island University, Southampton College Theatre Program. She studied and interned with Spiderwoman Theatre and is a second generation artist of that company that was founded by her mother Muriel Miguel. She also works on the deconstructing of methods of the arts in Native communities in urban areas across the country and in the New York City education system.  She consults many urban and non- urban universities on the development on Native theater programming. Nominated for the Rockefeller grant in 2001, won a Native Heart Award and was the only Native American Woman to have her work to be selected by the Olympic Games in Sydney Australia at the Sydney Opera House for her one woman show “ More than Feathers and Beads”. She served internationally  as the Special Assistant to the North American Regional Representative to the United Nations Permanent Forum on Indigenous Issues which one of her mandates was arts and culture. Directed Muriel Miquel  “Red Mother” nationally and Internationally. Keynote Speaker for the Indigenous Women’s Symposium  at Trent University. Global Indigenous Woman’s Caucus Chair ( North America ) in 2013 to May of 2014.  Selected to speak on Repetition, Tradition and Change: Native oral history and contemporary art practice in hostel post- colonial times at the International Conference at the Muthesius Academy of Art in Kiel Germany and the Norwegian Theater Academy.  She is the Artistic Director of Safe Harbors NYC. Native Consultant for Regional Tony award winner LaMaMa Experimental Theatre for their Indigenous Initiative. She produced, written and directed “Don’t Feed the Indians- A Divine Comedy Pageant!” at La MaMa Theatre. National Playwright Fellow from the Mellon Foundation.  Currently Assistant Professor at  Brown University.

‍Nicholson Billey is of the Chahta and Mvskoke People of Oklahoma and is an enrolled member of the Choctaw Nation of Oklahoma. While obtaining a MFA in Performance + Performance Studies, Nic began to present his solo performance work that utilized various multidirectional and poly-focal fundamentals from the everyday practices of Indigeneity with aspects from drama therapy to create Este Cate. Nic also holds an MA in drama therapy. Nic is honored to be a performance member of the Don’t Feed The Indians ensemble and a team member of the Safe Harbors NYC.

‍Kaipulaumakaniolono hails from the Pali Hāuli- uli o ke Koʻolau, the verdant Kahaluʻu, Oʻahu in the center of the Hawaiʻi archipelago. His studies in the MFA for Hawaiian Theatre program at UHM currently engages practices of indigenous futurity in reshaping and remembering traditional narratives. Kaipu has appeared in the productions of Kamapuaʻa (2004, 2005, 2007, 2008), Lāʻieikawai (2015), ʻAuʻa ʻia: Holding On (2019-2020) and as “Maui” in the Hawaiian language version of Disney’s Moana (2018). In 2021 he directed his thesis production He Leo Aloha. In addition to his work as a theatre artist, Kaipu composes Hawaiian chant and poetry. His vocal talents were featured at the Art of the Chanter (2017) and his latest composition is available on Nā Palapalai’s Back to the Patch (2019) and Ikaakamai’s I Kuanoʻo (2020).

‍Sir Curtis Kirby III (Bois Forte Band of Ojibwe and African American descent), is enjoying his fifth year directing the Ikidowin Youth Theater Ensemble (IYT), a program for the Indigenous Peoples Task Force. He was honored to be selected as Emerging Artist for a TPT special, which aired in June 2019. Kirby is mentored by Dipankar Mukherjee, Artistic Director of Pangea World Theater and has participated in the National Institute for Directing and Ensemble Creation the past two years. He has been awarded a Fellowship with Pangea World Theater for Directing.  He has worked with Bonnie Morris of Illusion Theater and Ty Defoe for a show at The Guthrie Theater. Kirby was the Assistant Director for Pangea World Theater’s Five Weeks, Sabra Falling and Mother Courage. IYT has been invited to perform at national conferences such as The National Boarding School Conference in Carlisle, PA, and the National Spit Tobacco Conference, where they premiered a new work, Beishigo Asemaa.

Danielle Soames (Mohawk) acts, writes, directs, and had an art exhibition in Spring 2021 at the Iroquois Museum in Howes Cove, NY. Danielle did the voiceover for the Plimoth Patuxet museum’s benefit, Voiced an educational diabetes prevention guidebook for the CDC, and a commercial for MoveIt.gov. Danielle wrote a short film for Nomad Theatrical Company and collaborated as a playwright for a live theatrical event in Spring of 2021. Danielle was featured in the show Don’t Feed the Indians as “Birdie” by Murielle Borst-Tarrant for Safe Harbors NYC- Reflections of Native Voices Theater Festival, hosted by New York Theatre Workshop and LaMama, etc. She directed a performance piece into film titled: Este-Cate by Nicholson Billey, as part of the festival. She has performed with Spiderwoman Theatre and Safe Harbors NYC for several years. In the Summer of 2019, she worked with People’s Light Theater in Malvern, PA to help develop a new script entitled: The Crushed Earth written by Sanjit De Silva and Deepa Purohit. Fully produced Vickie Ramirez’s play: SMOKE at the Signature Theatre on 42nd Street as part of Mixed Phoenix Theatre Group (2008-2014); which she was the Artistic Director for 6 years. Danielle has performed on stage since she was 12 years old. She received her Master’s Degree in Educational Theatre from NYU and graduated with Honors. She received a Bachelor of Science degree from Northeastern University, attended University of MN for Theatre and was the President at AISES (American Indian Science and Engineering Society). After graduating from NYU, Danielle was a Native American Fellow at the Peabody Essex Museum in Salem, MA. for the Education and Interpretation Department. Her personal mission has been to break stereotypes of mixed-ethnicities and mixed cultures by exploring identity, primarily in new plays and poetry events which address conflict within cultures.

Henu Josephine Tarrant (Rappahannock/Ho-Chunk/Kuna) is a lifetime Native NYC community member. A third generation New Yorker and second generation Jerseyite. All of which has had a huge influence on her very urban experience as a Native woman in the performing arts. She is a graduate of the American Musical & Dramatic Academy’s prestigious Musical Theater Program. She has attended the National Institute for Directing & Ensemble Creation, and the LABrynth Theater Intensive Ensemble. Her most recent works include Misdemeanor Dreams (La MaMa E.T.C, NY), 100 Years 100 Women: Restart Stages (Lincoln Center, NY), Native Theatre: Where Are We Now? (Howlround.com), Red Moon Blues (New York Theater Workshop NXT Door, NY) DOGFIGHT (Second Stage Theater, NY), Ajijaak On Turtle Island (The New Victory Theater, NY) , & Don’t Feed The Indians-A Divine Comedy Pageant (La MaMa E.T.C, NY) with Safe Harbors NYC. She also was a featured vocalist on the soundtrack of Dawnland (Composed by Jennifer Kriesberg). She is currently focused on serving as the interim Managing Director of Safe Harbors NYC, continuing to workshop her one-person show Red Moon Blues, and finishing her first EP SERPENT in 2022.

The La MaMa Indigenous Initiative aims to provide a platform for Indigenous arts and culture, both nationally and worldwide. La MaMa Experimental Theatre Club is committed to supporting ethnic diversity, cultural pluralism, and marginalized identities in the arts. The Initiative curates original Indigenous programming, including workshops, markets, and theatrical productions, to elevate the voices and artistic works of Native communities both nationally and internationally.