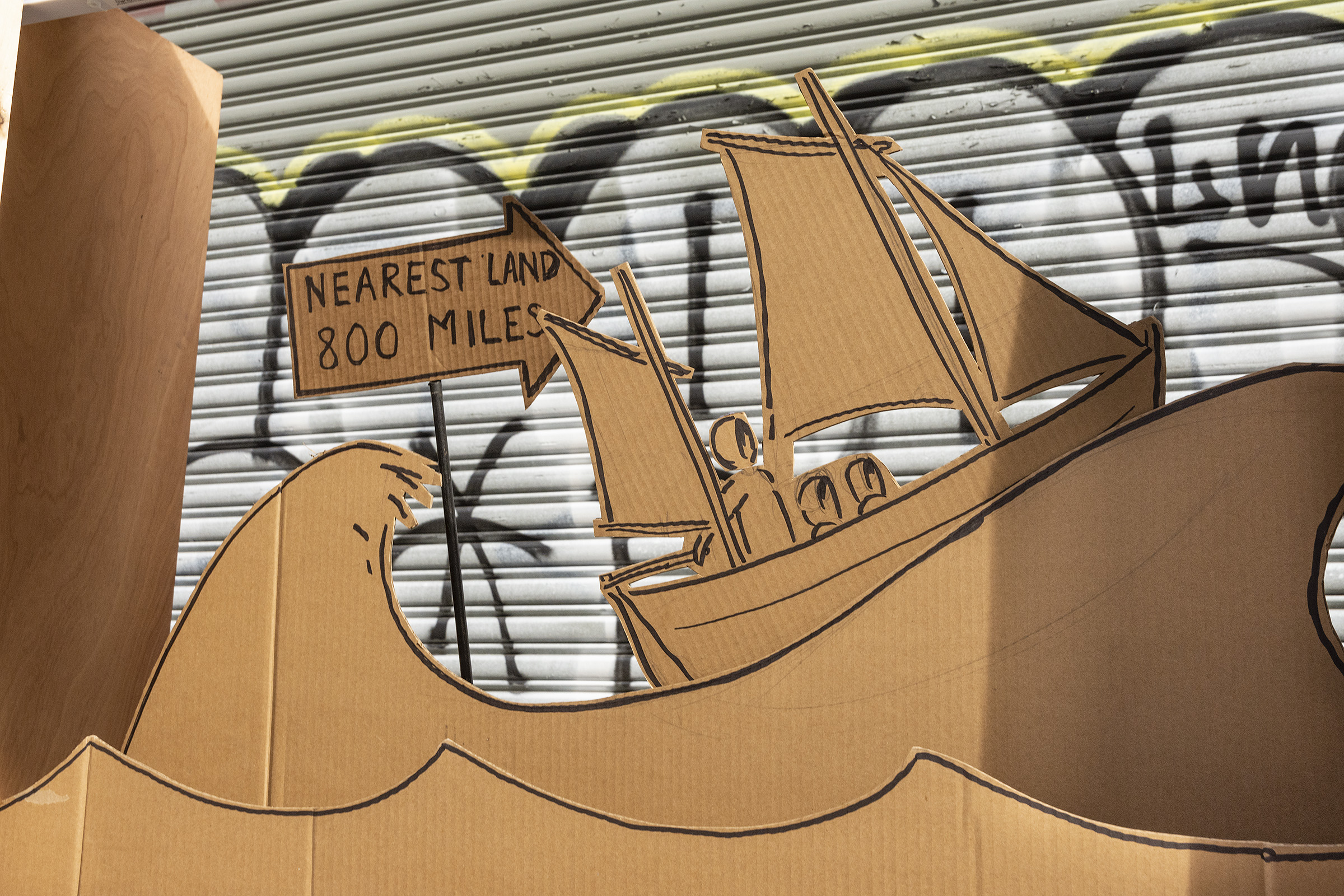 Concrete Temple Theatre is a multi-disciplinary company, committed to the creation of compelling new theatrical works, incorporating drama, dance, puppetry, music and the visual arts. Since 2004, Concrete Temple Theatre has created devised visual theatre that challenges the traditional relationship between design and text. Through touring original works and presenting workshops in NYC, nationally and internationally, we strive to bring myth and ritual back to the center of dialogue, by presenting works and workshops that address real issues within communities (grief, family relationships, environmental stewardship). We have presented our work for NYC audiences at venues like Ohio Theatre, HERE, and Barrow Street Theatre and have been artist-in-residence in NYC at The Flea Theater, Dixon Place, Mabou Mines, St. Ann’s Warehouse and chashama. Concrete Temple has toured work nationally at venues like: The Yard, Bard Summerscape, Detroit Institute of Arts, Pontine Theatre, Dairy Center for the Arts, Amphibian Stage Productions and internationally: London, Sri Lanka, India, Bulgaria, Turkey, Italy, Scotland, South Korea and Costa Rica.

Hobey Ford has performed on stages around the world. He is also the creator of Peepers Puppet. The winner of two Citations of Excellence from Union International de la Marionette USA, and recipient of three Jim Henson Foundation Grants, Ford is also a Kennedy Center Teaching Artist and hails from Weaverville NC.

Maiko Kikuchi received her B.A in Theater Arts and Fashion Design from Musashino Art University, Japan in 2008, her M.F.A in Sculpture from Pratt Institute, in 2012. She is a multidisciplinary artist working in illustration, painting, drawing, collage, sculpture, animation and puppetry/ performance. Her object theatre pieces include DAYDREAM TUTORIAL(Work in Progress) as part of Under The Radar Festival 2020 (INCOMING! Program) at The Public Theatre, LaMaMa and FiveMyles Gallery, PINK BUNNY at Japan Society and St.Ann’s Warehouse, ON THE OTHER SIDE OF THE FENSE at Dixon Place, NO NEED FOR A NIGHT LIGHT ON A LIGHT NIGHT LIKE TONIGHT at LaMaMa, DAYDREAM ANTHOLOGY at St. Ann’s Warehouse. She is currently in artist residency program at HERE collaborating with Spencer Lott and also one third of the curator members at a puppetry residency program Object Movement Festival at The Center at West Park in NYC.

Spica Wobbe (Shu-yun Cheng) is a puppetry artist originally from Taiwan. Her work has been seen in Taiwan, Hong Kong, Korea, Japan, Holland, Germany, Israel, Austria and the U.S. Now based in NYC, she works as a puppetry designer, performer and educator since she received her M.A. in Educational Theater from New York University in 2003. She established Double Image Theater Lab in 2011 to create cross-cultural productions that explore the world of the past and the present. Spica received the Exemplary Teaching Artist Award from New York University in 2014. She is a two time recipient of the Jim Henson Foundation grant and is a 2015 Sandglass Theater New Vision Series Resident Artist. Spica was the featured artist in “Shadow, Light… Hide & Seek Exhibit” at WenShand Theater in Taipei in 2015 and “Heaven of Puppets Exhibit” at Taipei Puppet Museum in 2016. Spica co-created The Memory Project with Karen Oughtred (2016), storytelling through visual arts, theater and puppetry for culturally diverse senior centers. The project received LMCC SU-CASA and Creative Learning grants in 2017. You can learn more about her work at http://www.doubleimagetheaterlab.com and about “The Memory Project” at https://www.facebook.com/thememoryproject.storytelling

Adelka Polak is an interdisciplinary performing artist who founded Sova Dance & Puppet Theater in CT in 2013. She has performed in Denmark, the Czech Republic, Turkey, Bulgaria and Taiwan with Masque Theatre since 2008. She performed at LaMaMa with the Czechoslovak-American Marionette Theatre, Ibex Puppetry, and Michael Pestel. She worked with Squonk Opera from 2002-2004 and tour internationally with this avant-garde theatre troupe that went “from junkyards to Broadway.” Sova Theater provides puppet & dance theater programs to early learning centers, museums, public schools, and home-schooled youth in CT & NY. Sova Theater advocates responsibility to humanity and the environment through arts and education. www.sovatheater.com

Anurupa Roy is a puppeteer, puppet designer and director of the puppet theater. Puppeteer Anurupa Roy’s views puppetry as not “manipulating dolls with strings” but an amalgam of plastic and performing arts where sculptures, masks, figures, materials, found objects and narratives come together with music, movement, physicality and theater to create the theater where humans and puppets are co actors. She started at her group Katkatha in 1998 which was registered as the Katkatha Puppet Arts Trust 2006. She has directed over 15 shows for children and adults ranging from the Ramayana and Mahabharata to Shakespearen comedy to the Humayun-nama.

ShadowLight was founded in 1972 by filmmaker/theatre director/shadow artist Larry Reed. The driving forces were Reed’s interests in and appreciation of shadow theatre traditions, film and world cultures, and the passion to express them in an integrated fashion. He is one of the few Westerners to have trained in the traditional Balinese shadow theatre and is a dalang or “shadow master.” After over 15 years of studying and performing in this tradition, Reed began expanding the scope of ShadowLight’s artistic activities in order to create a deeper connection with contemporary American audiences. Through much exploration and experimentation, he successfully integrated traditional shadow theater techniques with modern theater and film styles. The outcome was a “live animation film” – a completely original way of using shadows in theatre that is not culture-bound. Performed behind and in front of a 15’x 30’ screen, these works orchestrate silhouettes of puppets, actors, and cutout sets illuminated by multiple electric light sources to create cinematic effects live on stage. Each show features live music and is created by a collaborating ensemble of writers, choreographers, composers, designers, actors, dancers, musicians and puppeteers from various cultural backgrounds, artistic disciplines and styles.

Paul Zaloom is a comedic puppeteer, political satirist, filmmaker, and performance artist who lives and works in Los Angeles and tours his work all over the world. Zaloom has written, designed and performed 14 full length solo spectacles, including Fruit of Zaloom, Zaloominations, Sick But True, Velvetville, The Mother of All Enemies and the current spectacle, White Like Me: A Honky Dory Puppet Show. Zaloom has played the Kennedy Center, Lincoln Center, the Spoleto Festival USA, the American Repertory Theater, and King Tut’s Wah-Wah Hut, among hundreds of venues in 40+ states. Numerous international festivals have featured his work on many tours to Europe, including the Edinburgh Festival Fringe, Scotland; Les Semaines de la Marionette, Paris; and the UNIMA World Congress, Dresden, DDR. Since 1992, Zaloom has also appeared on the cult favorite, science educational TV show, Beakman’s World, as Beakman, the wacked-out, weirdo scientist who answers viewers’ questions about science, nature, and various bodily functions. Zaloom tours three stage shows based on the TV program: Beakman In Person!, Beakman Live!, and Beakman on the Brain, each featuring large scale science demonstrations with loads of audience participation and lots of trademark goofy Beakman humor.

Lynn Jeffries designs puppets, sets and costumes. She is a founding member of Cornerstone Theater Company, which recently celebrated its thirtieth year of producing original plays with, for and about communities in Los Angeles and beyond. Since 2003, she has collaborated on numerous spectacles with satirical puppeteer/performance artist Paul Zaloom. Their latest, White Like Me: a Honky Dory Puppet Show, has toured to eight countries and throughout the United States. Lynn has designed puppets, sets or costumes at several regional theaters, including Oregon Shakespeare Festival, Arena Stage, The Guthrie, South Coast Repertory and Long Wharf. For several years, she performed original shadow puppet pieces in bars and nightclubs with the neo-Vaudevillian band, The Ditty Bops. Her awards include an LA Weekly Award, an Ovation Honor, and a Los Angeles Drama Critics Circle Award for puppet design; Backstage West Garland Awards for set design and for costume design; and a Drama-Logue Award for scenic design. Lynn is also honored to be the only set designer whose work has been featured on the cover of the Norcatur, Kansas, Grain Company calendar.

Lake Simons is a director, designer, puppeteer, physical performer, and a maker of things.  She has collaborated with many artists creating theatre productions from the ground up utilizing puppetry, movement, & live music. But most importantly Lake relies on make-believe. Lake has received multiple Jim Henson Foundation grants in support of her original puppetry productions.  As an artistic associate with the Hip Pocket Theatre in Texas, Lake participates as a director, performer, and designer. Lake is a co-director for the Puppet Lab at St. Ann’s Warehouse in Brooklyn. She teaches in the theatre department at Sarah Lawrence College. Lake attended Ecole Jacques Lecoq in Paris, France and North Carolina School of the Arts.