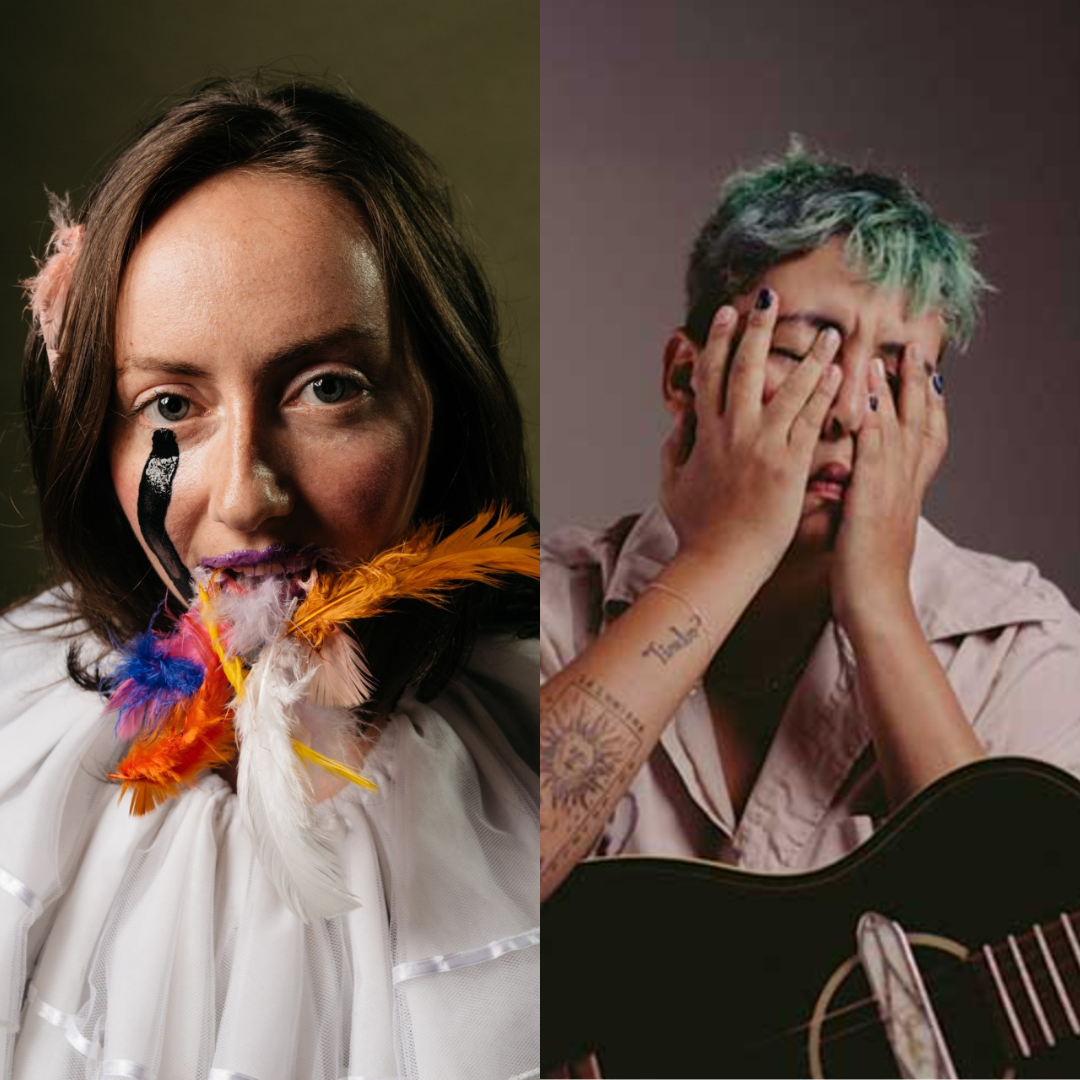 Called “a hilarious, finely tuned absurdist” (Theatre Jones) and “outrageous and profane” (NYTimes), Alex Tatarsky makes performances in the uncomfortable in-between zone of comedy, performance art, dance-theater, and deluded rant—sometimes with songs. Playing with perceptions of language and narrative structure, their performances are highly responsive to venue and audience. Careening between tightly scripted sequences and wildly unhinged experiments, Tatarsky will address some of their ongoing obsessions: the plight of garden gnomes, the songs of harpies, and a sense of despair and foreboding after killing – through benign neglect followed by overzealous watering – their favorite houseplant: a species known as the Wandering Jew.

They are delighted to be sharing the evening with their friend, the genius freak River L. Ramirez.

Once, Tatarsky acquired a large painting River had made of a sad and scary clown named Flowers. Tatarsky brought this painting on the Chinatown bus to Philadelphia and then to a local Bank of America branch that was on their way home. Upon seeing the portrait of Flowers the Clown, the bank teller promptly declared that he’d made the wrong choices in life and that he actually wanted to be a social worker. This is what art does. It changes lives. Flowers may or may not feature in this evening.

Born and bred in NYC, Alex Tatarsky has performed original solo works at venues including MoMA PS1, The Kitchen, The Glove, Ars Nova, Dixon Place, Gibney, Judson Church and many bars and basements. Recent research investigates the connections between clowns and compost.Tatarsky experienced fleeting fame as Andy Kaufman’s daughter and often performs as a mound of dirt.

River L. Ramirez (they/them) is a Broklyn-based artist, comedian and writer who wrote, produced and directed the comedy special program Pervert Everything for Cartoon Network’s Adult Swim. Ramirez has appeared on the HBO comedy series Random Acts of Flyness and in the final season of Comedy Central’s Broad City. Ramirez has written for High Maintenance and The National Lampoon Radio Hour. Ramirez can be seen in a recurring role in the HBO comedy series Los Espookys, opposite Fred Armisen, and opposite Glenn Close, in John Cameron Mitchell’s musical anthology podcast Anthem and featured as Charly in BRDGIRL. Named one of Comedy Central’s Up Next Comedians for 2018, Ramirez was featured in the San Francisco Cluster Fest comedy festival, and performed at the Public Theater in New York as part of the January 2019, Under the Radar Festival. A regular correspondent on the Viceland Channel, Ramirez has performed at Caroline’s, UCB, Ars Nova, The Chris Gethard Show, and the Brooklyn Comedy Festival and many more.