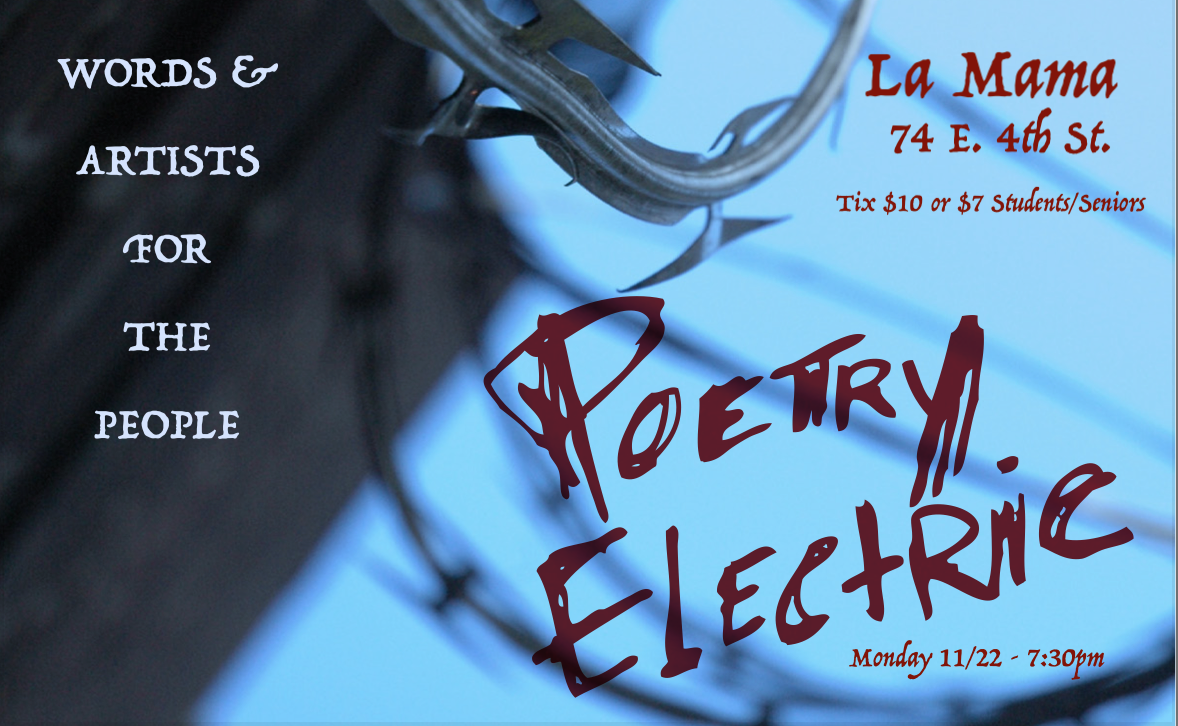 Poetry Electric Presents WORDS & ARTISTS FOR THE PEOPLE, a night of poetry, spoken word, lyric essay, monologue, music, and more. These New York artists, through their words, present themselves to and for the people of downtown. Cozy up at La Mama for a night of poetic community—because this one is for you!

Olivia Hunt is a writer, performer, and translator based in New York, in a love hate relationship with her material-packed upbringing in the suburbs of Philly. Her work has been published by Carnegie Hall, Confluence Academic Journal, ANGLES Magazine, and Project Y Theatre Company, read at Theatre 80 St. Marks' Naked Angels Collective, and staged by Village Playwrights. She is also the Director of all-femme sketch and improv comedy troupe Bechdel Test, and the Co-Creator of comedy podcast-turned-live show, Lovers and Doctors at the Kraine Theater, downtown.

Vrndavana Lila is an artist based in NYC. She explores spirituality, transcendence, and duality in her work, ranging from music to poetry, drawing and painting. She grew up living in Hare Krsna Ashrams and communities on the East Coast and is influenced by her upbringing and practice of Bhakti Yoga.

Lars Montanaro is a Brooklyn-based actor and poet who loves to make//stumble//wade//dive into spaces where poetry and theater blend together. you can find him at poetry mics around the city or at a Brooklyn Poets event or workshop. email him at larsmontanaro@gmail.com, for any reason at all.  =)

Cadence Qween aka Calvin Cooper is from Newport News, Va. He is a an up and coming poet, rapper, dancer, singer, and actor who can be seen currently on Broadway in Mrs. Doubtfire.

Kylie Vincent is a stand-up, activist, and theatre artist in New York City. Previously, in her capacity as March For Our Lives NY State Action Director, Kylie is a frequent speaker & producer for art & activism events. As an actor/sketch artist, Kylie has been seen in NBC’s pilot “Gen Z,” Adult Swim’s “Digikiss,” and UCB NYC’s Hells Kitchen, Main Stage. Kylie has traveled to Europe for Stand-up in her Amsterdam Tour & been published in multiple outlets for her comedy writing such as LOL Comedy & Points In Case. With her first full-length play BIRD, Kylie brings her loves of comedy, activism, and theatre together, sharing her story and a cathartic, empowering message about sexual violence and survivorship.

William Wagner is a professional bassist, pianist, and composer based in Brooklyn, NY. He received his undergraduate and graduate degrees in Jazz Studies from the University of Cincinnati’s College-Conservatory of Music. He’s performed with John Von Ohlen (Stan Kenton), Jason Rebello (Sting), Josiah Wolf (Why?), Fareed Haque, Bill Cunliffe, and J.D. Allen, to name a few. He’s composed dozens of works from big band charts to string quartet arrangements and has received a Downbeat Award for Composition. His music can be heard on all major streaming platforms under his artist name william.charles.wagner.