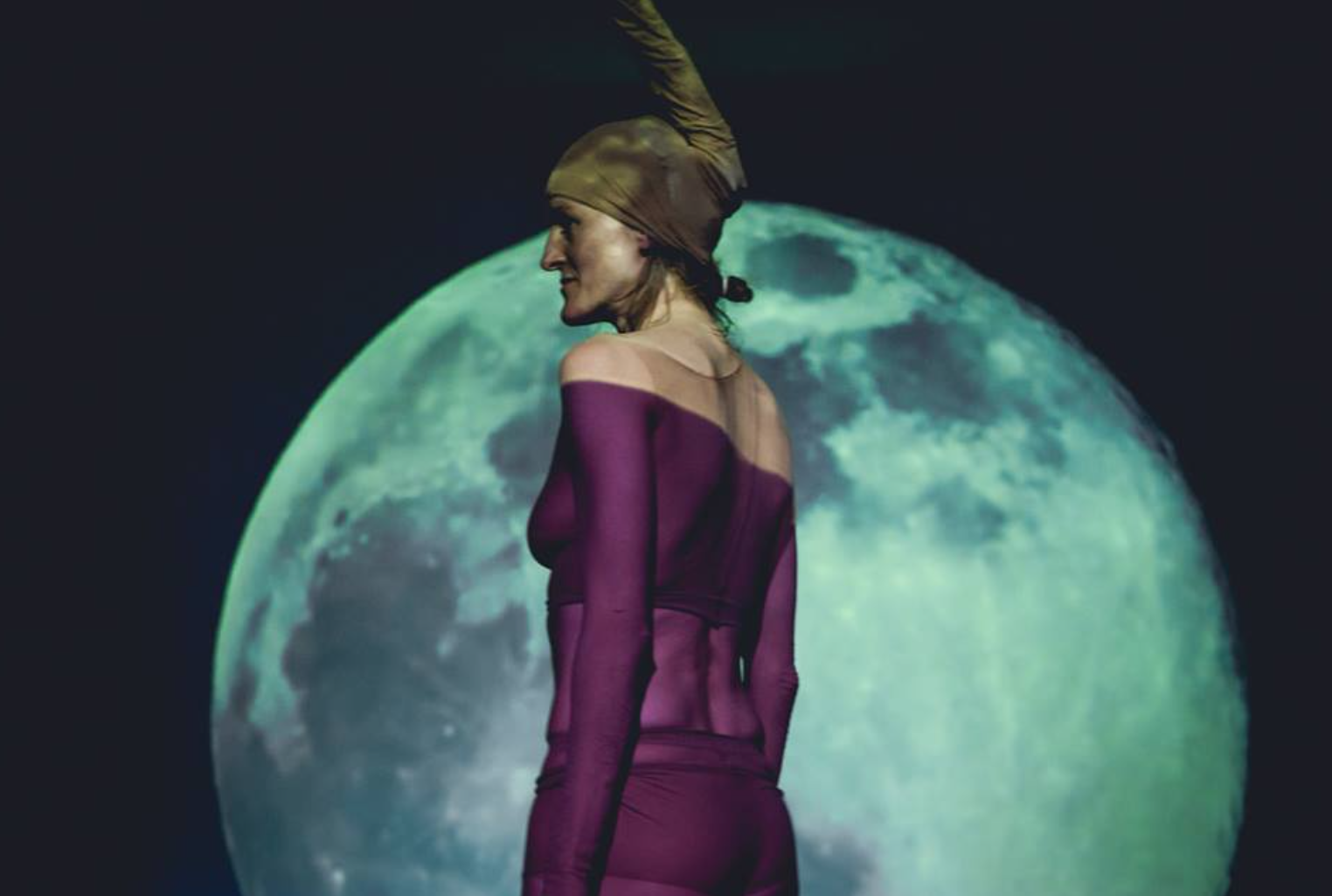 The Perforations Festival | La MaMa from La MaMa on Vimeo.

All Performances in English

Taking place annually in Croatia since 2009, Perforacije (Perforations) is the largest initiative focused on artists from Central and Eastern Europe whose work is created within the independent artistic scene. Recipient of an EFFE Award for its innovative programming, Perforations presents artists working in performance art, dance, and theater whose diverse approaches to art-making blur the borders between these genres. While the works touch upon issues of identity, of a collective past, and personal histories, the primary focus is on the present and future. Perforations Festival NY was first presented at La MaMa in 2011.

In Staying Alive, Croatian artist Jasna L. Vinovrški and her collaborators—a book and an electronic tablet—tackle the migration debate. In a humble demonstration of community, the book is passed around for the audience to touch and read while Vinovrški experiments with the iPad’s potential for eye contact. Teetering between the heartfelt and the absurd, Staying Alive is a precarious situation—one that gradually becomes a state of emergency. Support provided by the Trust for Mutual Understanding

The Great Jones Repertory Company (GJRC) collaborates with Croatian director Ivica Buljan on Pasolini’s Pylade. This contemporary reinterpretation of the relationship between Pylades and Orestes from Greek mythology and the Oresteia is a poetic, tragic meditation on democracy, consumerism, and the struggle for real social change. The rhythm and emotion of Pasolini’s text, translated into English by Adam Paolozza and Coleen MacPherson, is heightened by the music and movement incorporated into this production by Buljan and GJRC to create a total theater of movement, text, spectacle, and music. Dramaturgy by Zisan Ugurlu. Pylade had its world premiere at La MaMa in 2015.

Make Yourself, an experience somewhere between gym training, techno party, and corporate mindfulness church, starts with a set of imperatives and a body sculpture. Five performers assume the names High Speed, Coco, Lordi, Glow and Beauty, with Marta Ziółek (aka Angel Dust) serving as moderator and guide. Described by the artists as “a utopian structure that creates its own style, language, and sexuality—Make Yourself is a kind of ‘trip’ that transmutes the body into a machine.”

One Hundred Toasts is a celebration—a farewell toast, so to speak, of the romantic idea of the artist-producer and a welcome to the artist-consumer. The work examines how the artist as an embodiment of “true, authentic, genuine human production” no longer exists and how we are faced with the artist as innovator of consumption, and a maker of various artistic forms of consumption. Performed by Wach, with music by Glenn Miller, Michael Nyman, the Stooges, and Alfred Schnittke.

A double bill of ontological insecurity that differs wildly in style, the latest two-hander by Magda Stawman-Tuka and Anita Wach plays with ideas of disappearance in relation to our sense of being. The episodic ritual of Private Inventory, conceived as a choreography of the hidden, is followed by an imaginary Joseph Beuys workshop, the setting for an exploration of self-sacrifice and transformation in How the Hares Are Dying. Together with the audience the performers enter the empty space and will try to fill it with events rooted in very personal sources. The events may seem trivial, frivolous, bizarre, but because they are theirs they are unique.

Through movement and encounter of two bodies and their opposite poles, Suddenly Everywhere explores the influences on our (ir)rational decisions and states of being—how we are woven by our histories, experiences, (in)securities, and personal aims for the future. Deconstructing the complicated structure of paths we take and gaps therein, Suddenly Everywhere makes visible that which is seemingly not present. Co-created and performed by Bruno Isaković and Mia Zalukar. Dramaturgy by Katarina Pejović. Video design by Dora Durkesac.

A two-part conceptual project, Ina Sladić’s Penny/Audience plays with the ideas of risk and of art that disappears in the moment of the performance. The two works will be presented on separate nights. On November 25, Sladić will perform Penny in which legendary downtown performance artist Penny Arcade will give her performance instructions via an audio installation that Sladić will hear for the first time when she steps on stage.

A two-part conceptual project, Ina Sladić’s Penny/Audience plays with the ideas of risk and of art that disappears in the moment of the performance. The two works will be presented on separate nights. In Audience (presented on November 26), the instructions will come from the audience and will be given to the artist right before the show.

Zvonimir Dobrović created the Perforations Festival in 2009, along with a network of organizations and producers from the Balkans region with the goal of initiating and promoting regional cooperation and creating local and international opportunities for young and emerging artists. The new commissions and productions are presented at the annual Perforations Festival that takes place in Zagreb, Rijeka, and Dubrovnik, programming more than 20 new works by artists from Central and Eastern Europe. He is also the founder and program director of the Queer Zagreb festival, which has been taking place in Croatia since 2003. Queer Zagreb has presented more than 150 artists and performing companies from all over the world. Dobrović co-founded the Queer New York International Arts Festival with the late André von Ah in 2012. He is often invited to teach and hold workshops about curating, curatorial advocacy, and arts management around the world.

Bruno Isaković is a performer, choreographer, and teacher based in Zagreb. He graduated with a degree in contemporary dance from the Amsterdam School of the Arts in 2009. From 2011 to 2015 he was a member of Contemporary Dance Studio. Isaković has received various awards, including a Jury Award and Best Solo Dance Award at the Solo Dance International Festival in Budapest, and the 2016 Croatian national award for best choreographer for his work Denuded (ensemble version). His solo Denuded (2013) toured around the world and his work Disclosures premiered in New York in 2015. He is artistic director of the annual Sounded Bodies Festival in Zagreb.

Ina Sladić lives and works in Croatia and Germany. She continuously explores borders of performance art, phenomena of pop culture, social networks, and spectacle-oriented society in her works. Educated as a dancer at Folkwang University of Arts, Sladić has worked with various choreographers and performance artists including Xavier Le Roy, Marten Spangberg, Isabelle Schad, Johannes Wieland, Mike Kelley, Simone Forti, and Joan Jonas. She has also worked with Marina Abramovic since 2012; including a re-performance of Abramović’s work at the Museum of Contemporary Arts in Zagreb.

TukaWach was founded by the core creative team of Magdalena Tuka and Anita Wach, performers from theater and dance respectively. After working together in previous collaborations, the two were inspired to formally unite as a company. From 2013 to 2016 TukaWach was known as Ja Ja Ja Ne Ne Ne after the Joseph Beuys artwork. Through its various fusions of new dramaturgy and multimedia experimentation, the narrative of a TukaWach show is never a linear cause-and-effect system of events but one open to fragmentation and deconstruction. Fiction is employed as a device for the performer-devisors to confront personal material though unfixed strategies.

Mia Zalukar studied at the Salzburg Experimental Academy of Dance and completed her BA in cultural management in Croatia. She has collaborated with many choreographers, including Marjana Krajač, Irma Omerzo, and Bruno Isaković. She was nominated for a Croatian Theatre Award in 2016 for her performances in Denuded and Disclosures by Bruno Isaković. She is a high school art teacher of stage performance, contemporary dance, and rhythmics.

Choreographer and performer Marta Ziółek studied humanities at the University of Warsaw before studying choreography at the School for New Dance Development in Amsterdam. Her work focuses on expanding the field of practice in choreography and the study of new forms of expression and embodiment. Ziółek has participated in workshops and collaborated with such choreographers and theoreticians as Bojana Cvejić, DD Dorvillier, Deborah Hay, Maria La Ribot, Trajal Harrell, Benoit Lachambre, Ann Liv Young, Xavier Le Roy, and Meg Stuart. Ziółek’s work has been presented in the Netherlands, Germany, Austria, Switzerland, Poland, and the United States.

Via Negativa is a Ljubljana-based international platform for research, development, and production of contemporary performing arts. Founded in 2002, it operates under the artistic direction of theater director Bojan Jablanovec and is focused on devising and exploring different performing strategies, with an emphasis on ethics, performance practices, procedures, and genres. In addition to productions, Via Negativa conducts workshops as the VN Laboratory for Contemporary Performing Arts. Via Negativa has devised numerous projects that have been presented in 24 European countries and in the United States.