U.S. Premiere
In association with Tokyo Metropolitan Theatre and NODA・MAP presents
Written and Directed by Hideki Noda
English Translation adapted by Will Sharpe

One Green Bottle from La MaMa on Vimeo.

An absurdist gender-bending farce, One Green Bottle artfully illustrates our current selfie society’s relationship with consumerism and modern technology through one night in the life of a disordered family on the road to ruin: Bo, Boo and Pickle all have plans, but someone must stay home to care for their pregnant dog, Princess. Trivial disputes and slapstick mischief quickly morph into family feuds and also, possibly, to the end of the world. 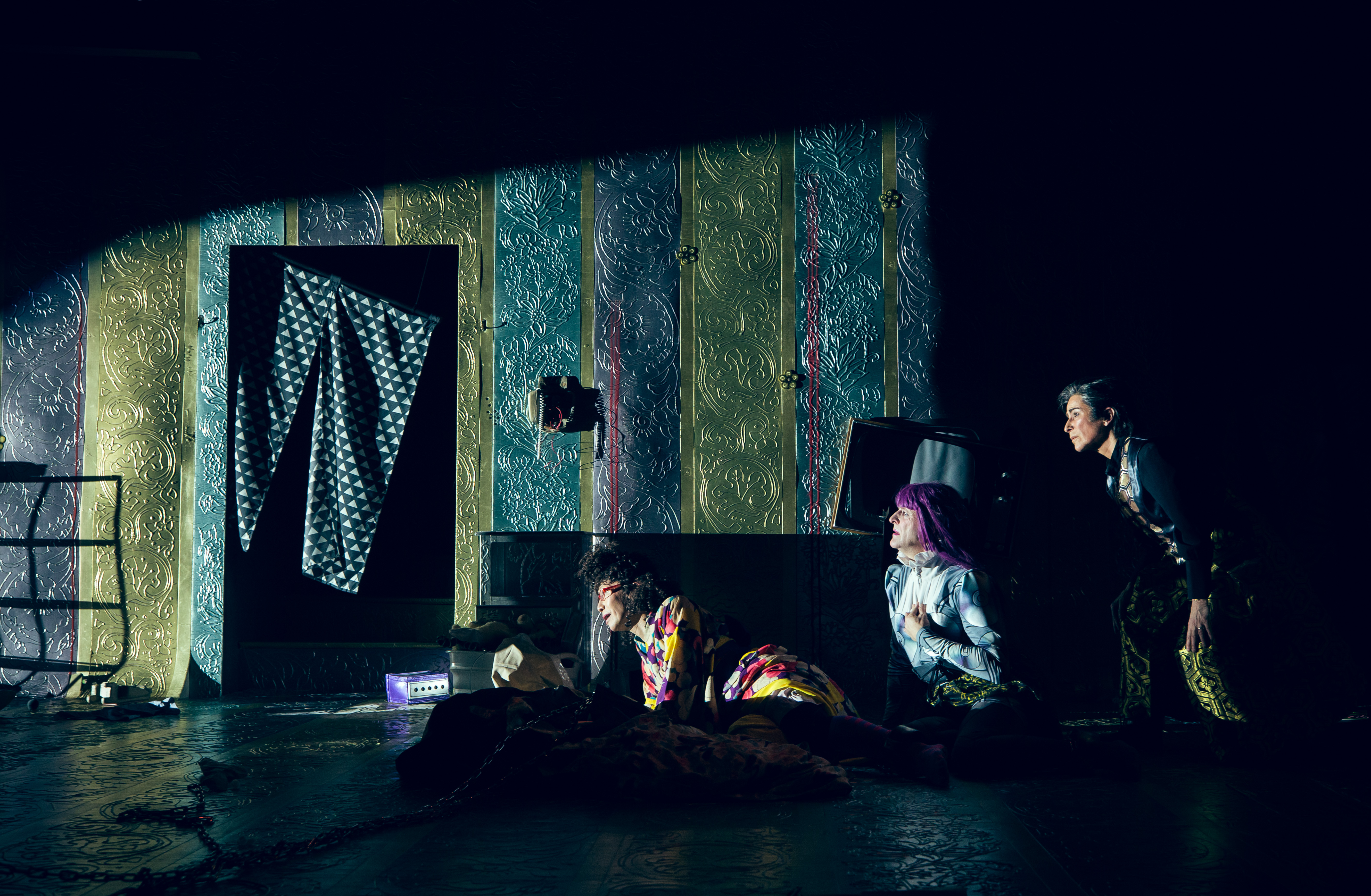 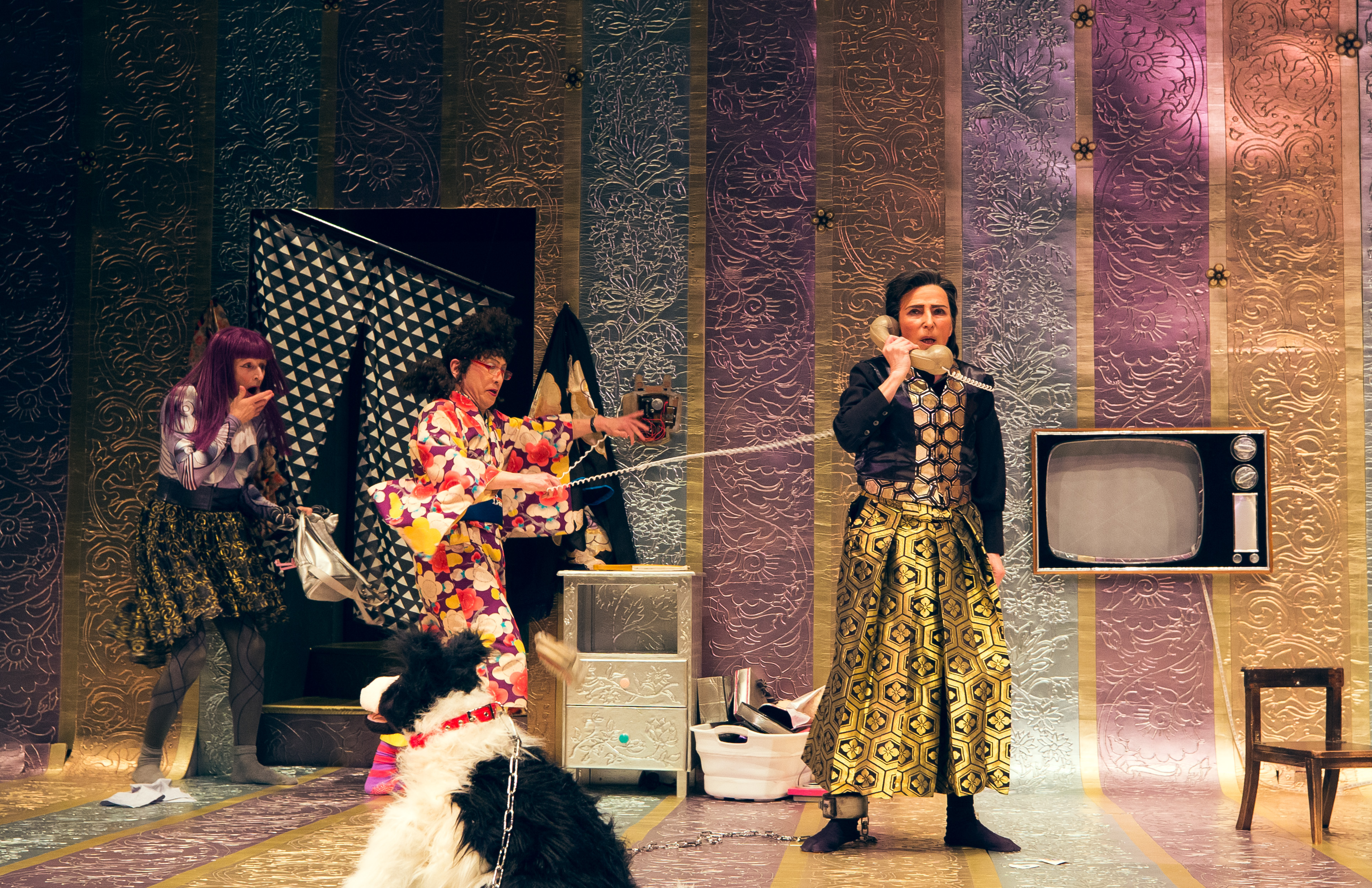 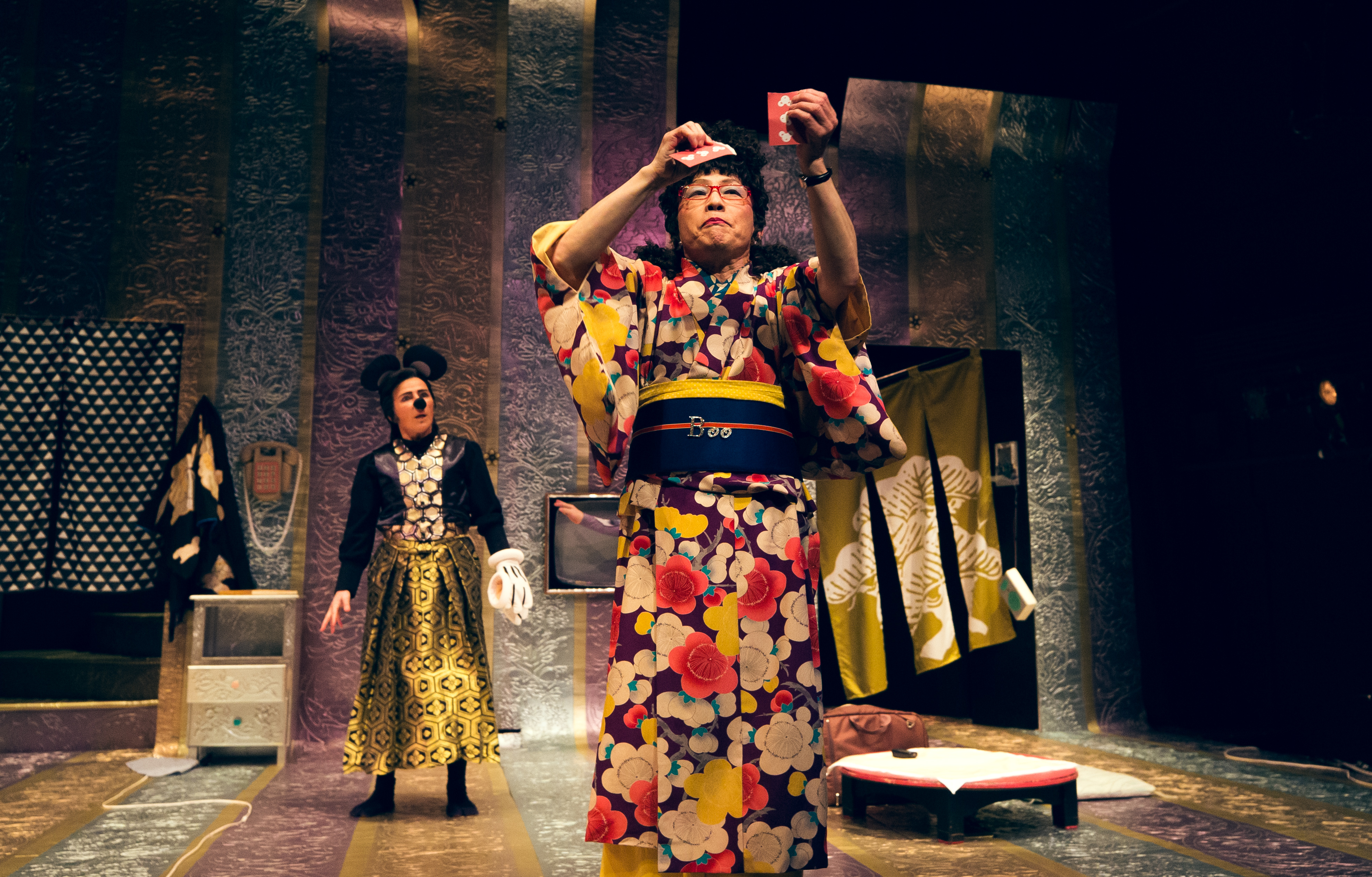 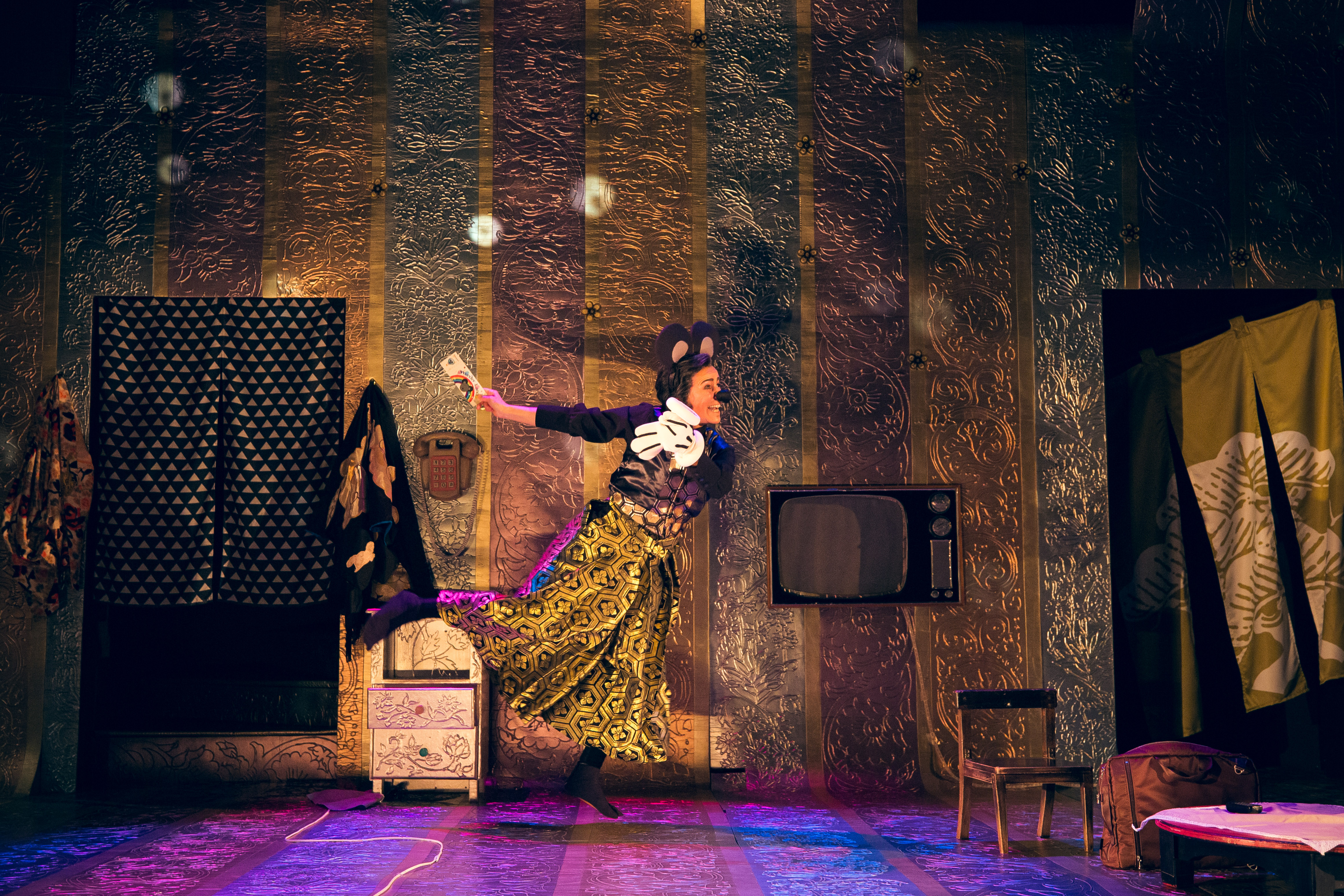 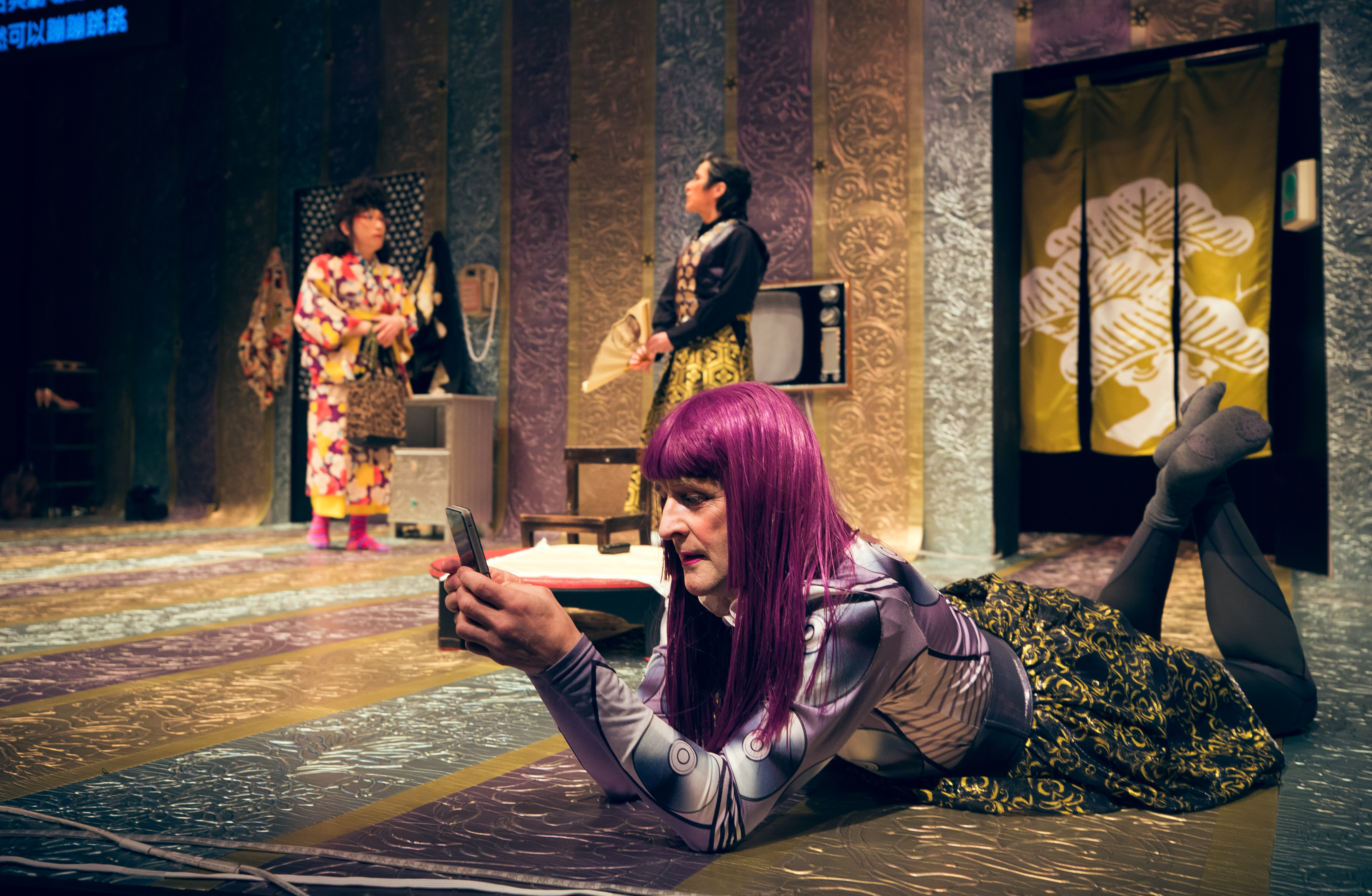 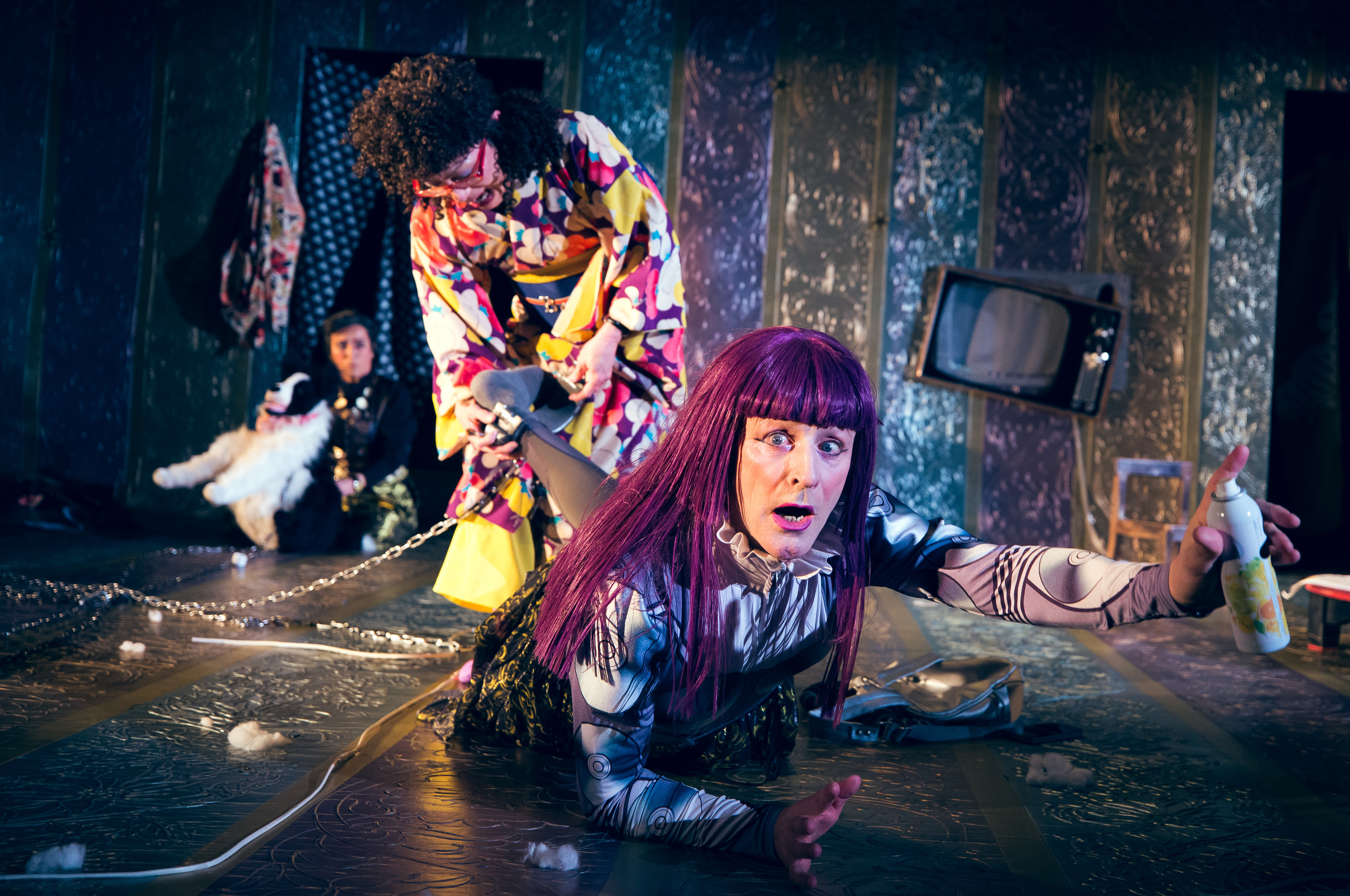 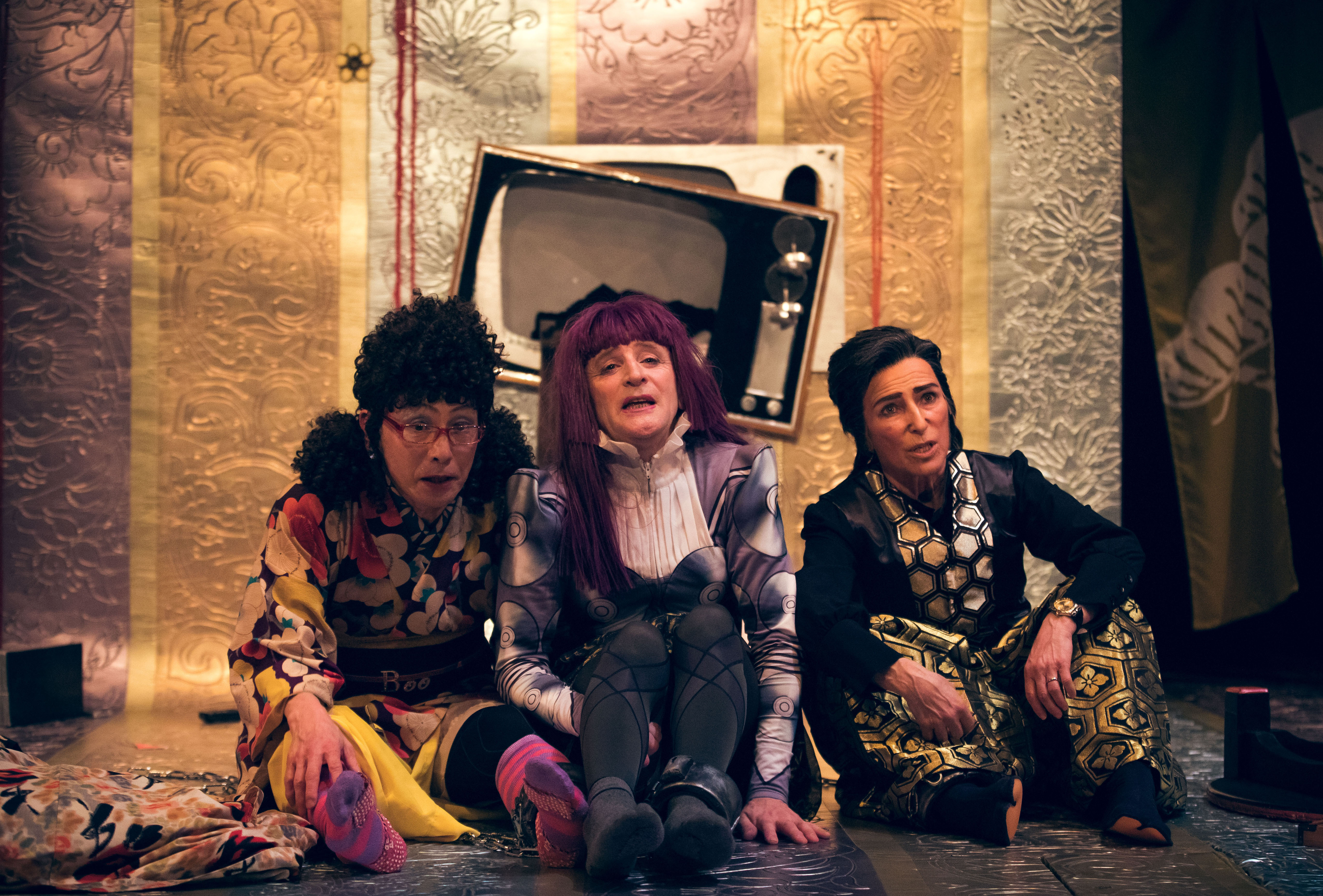 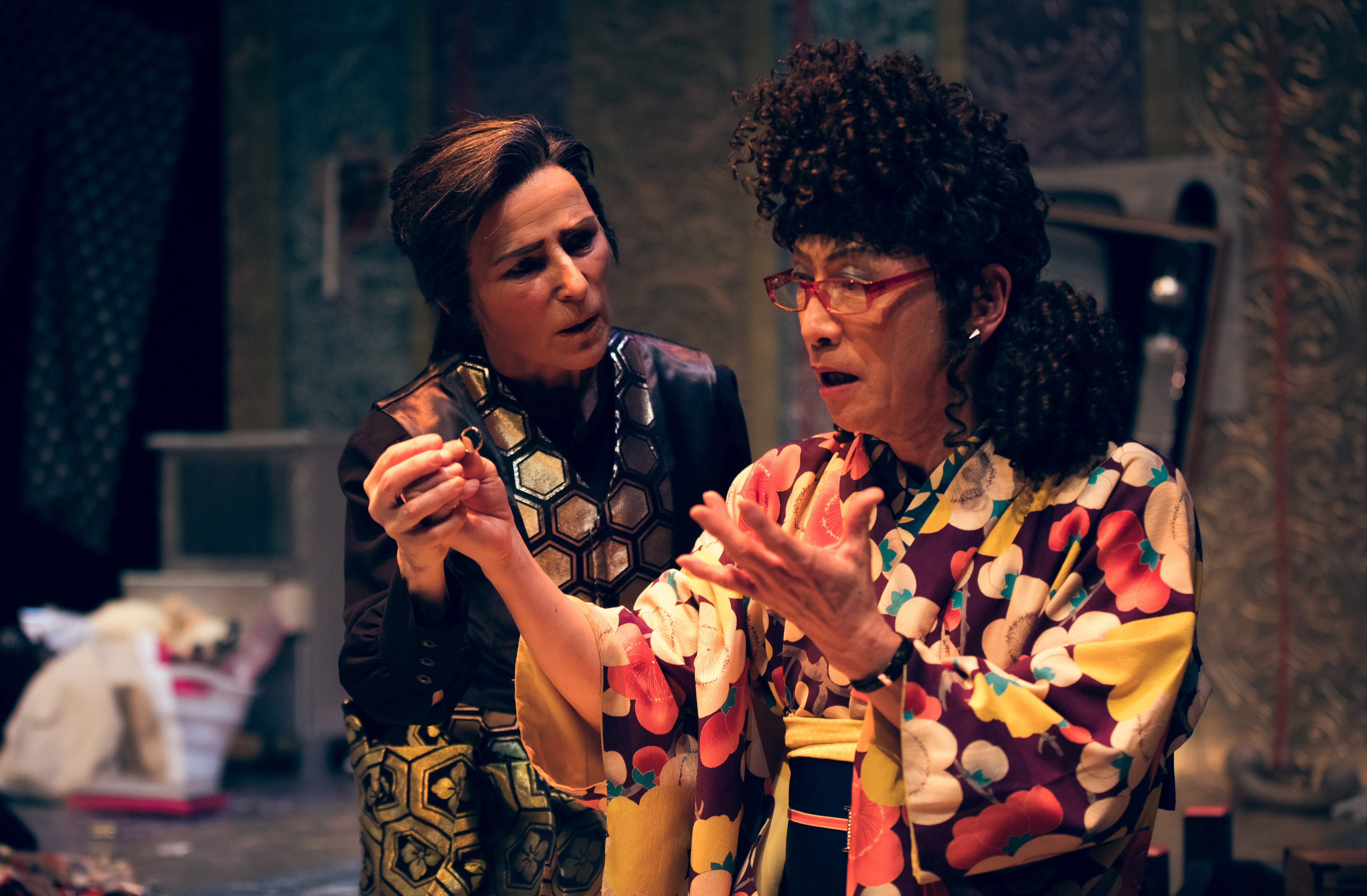 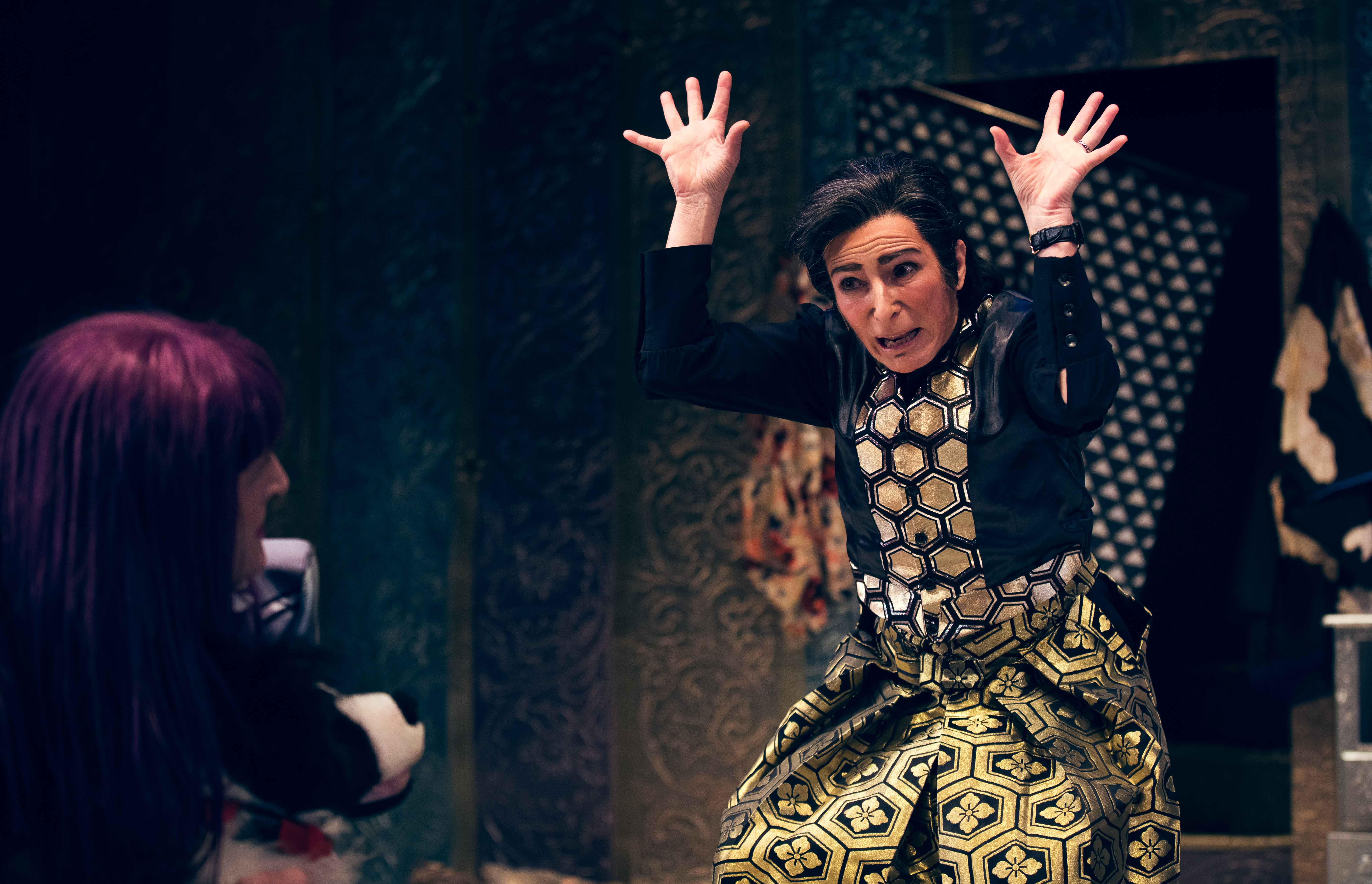 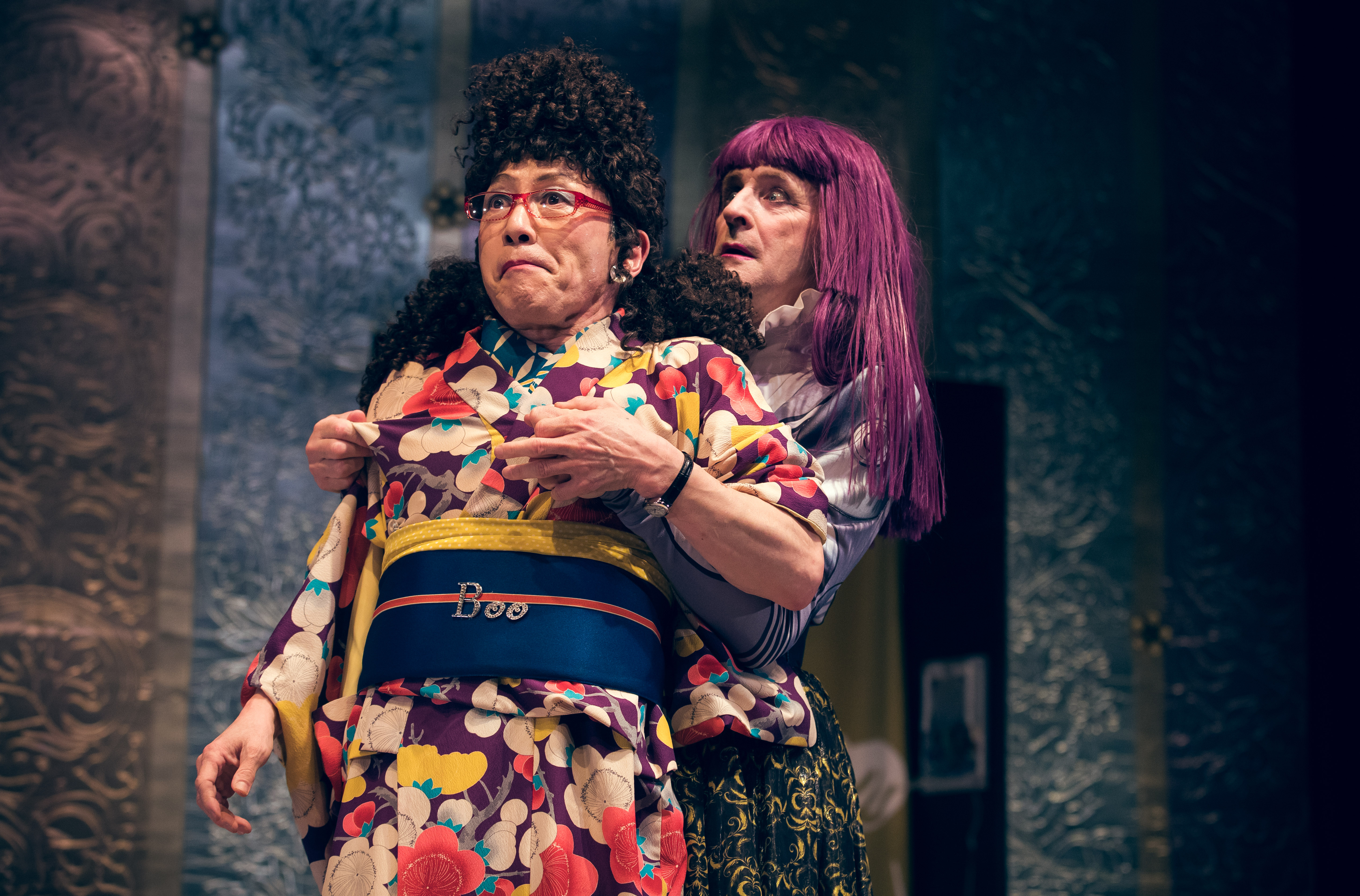 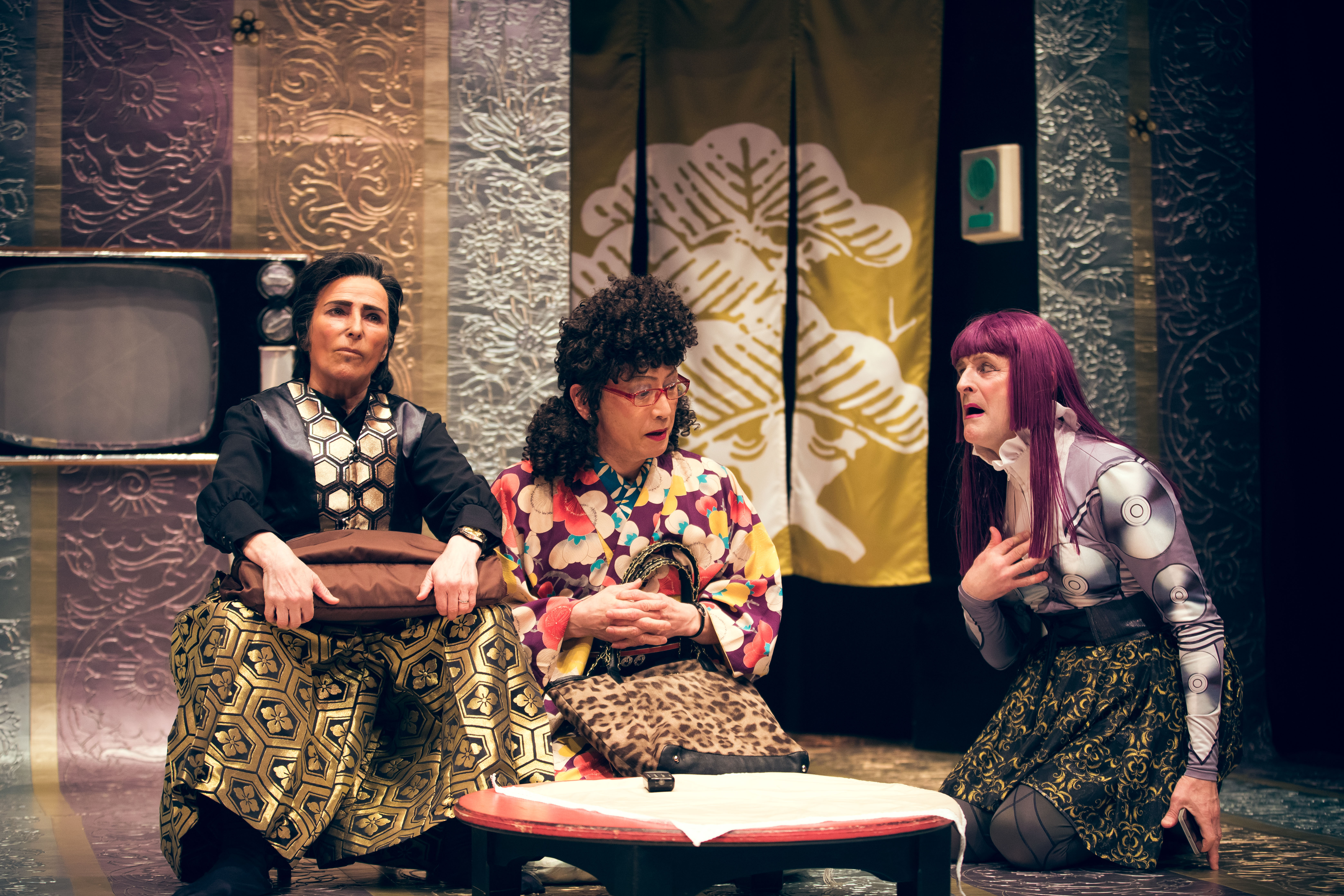 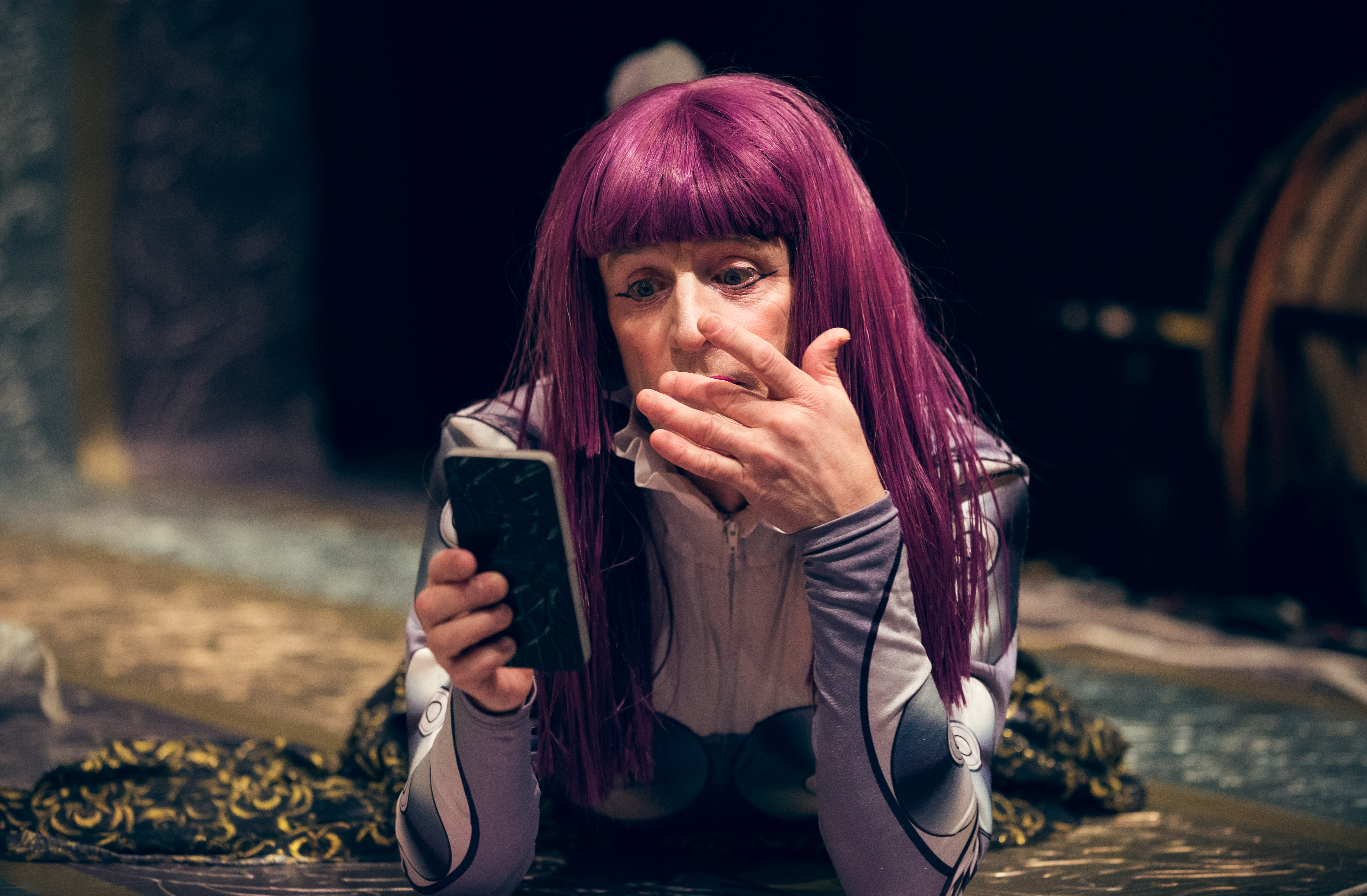 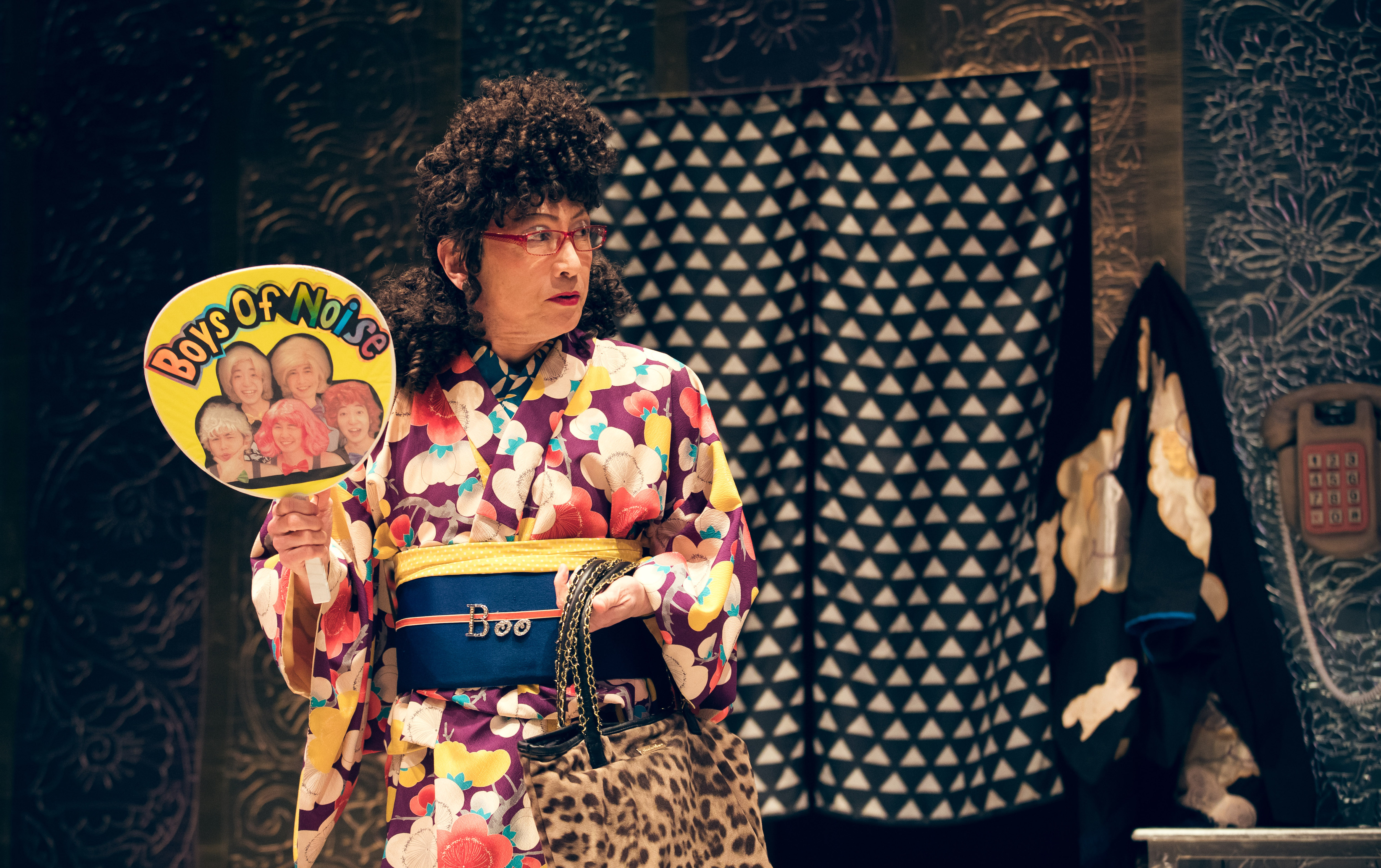 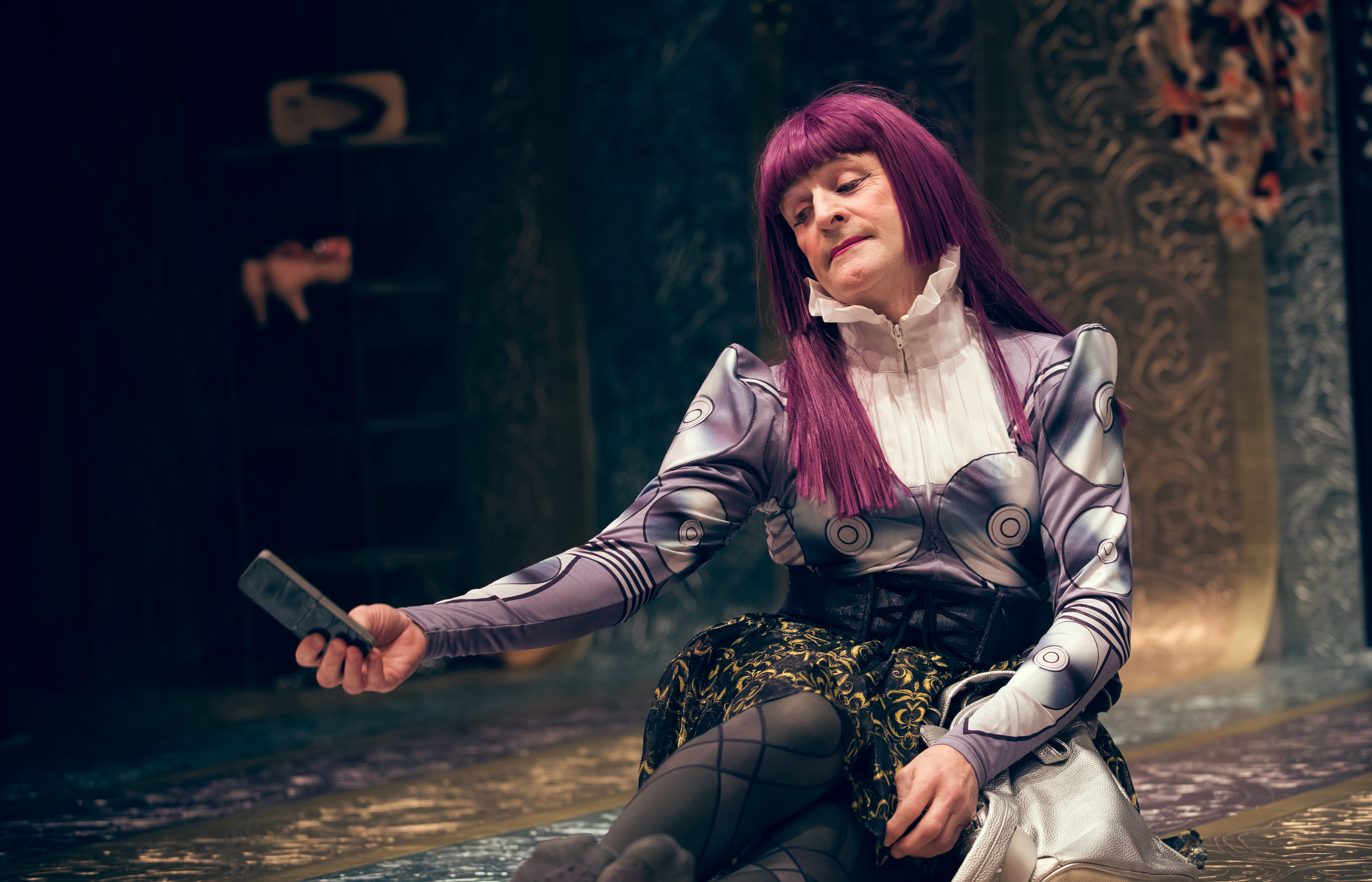 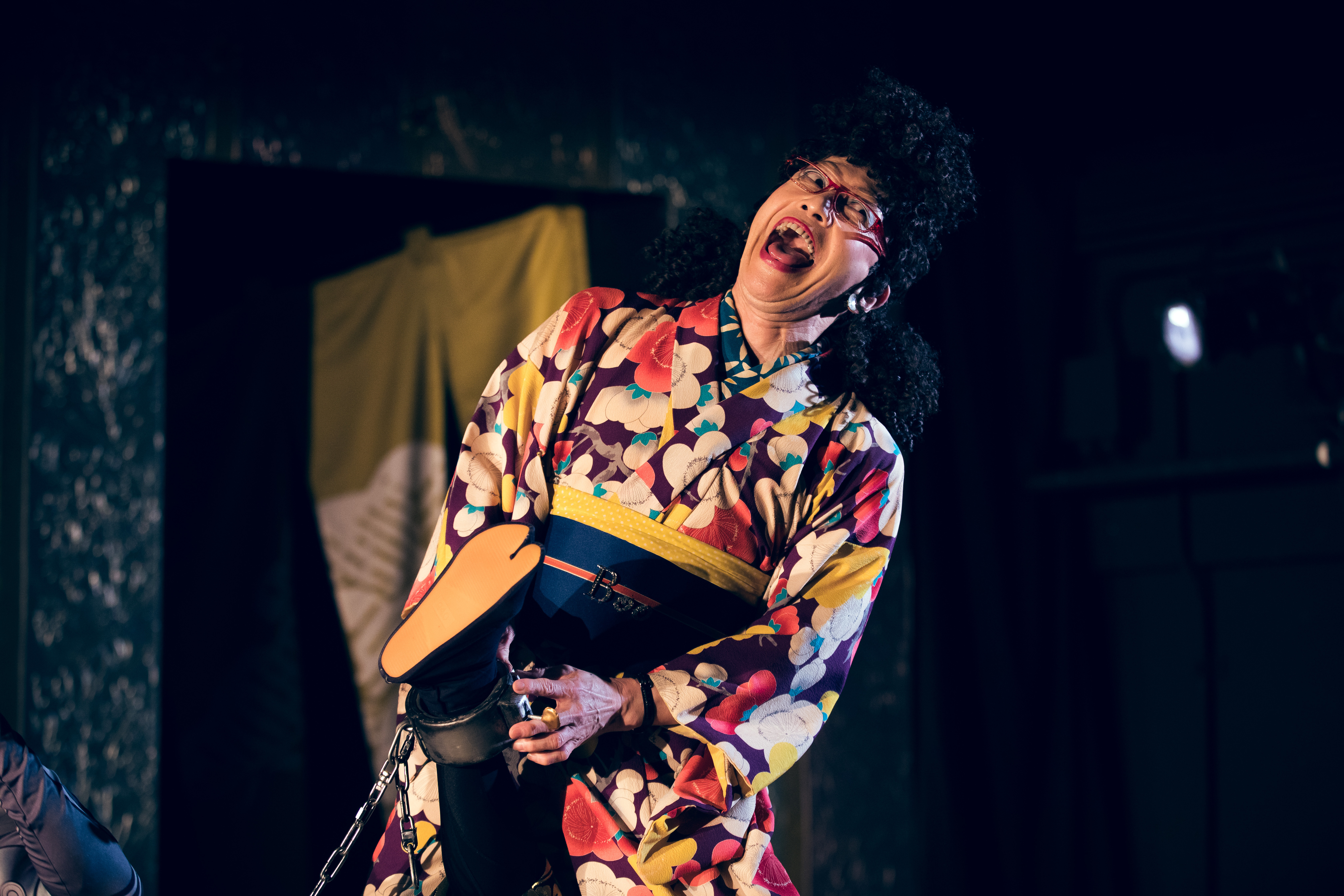 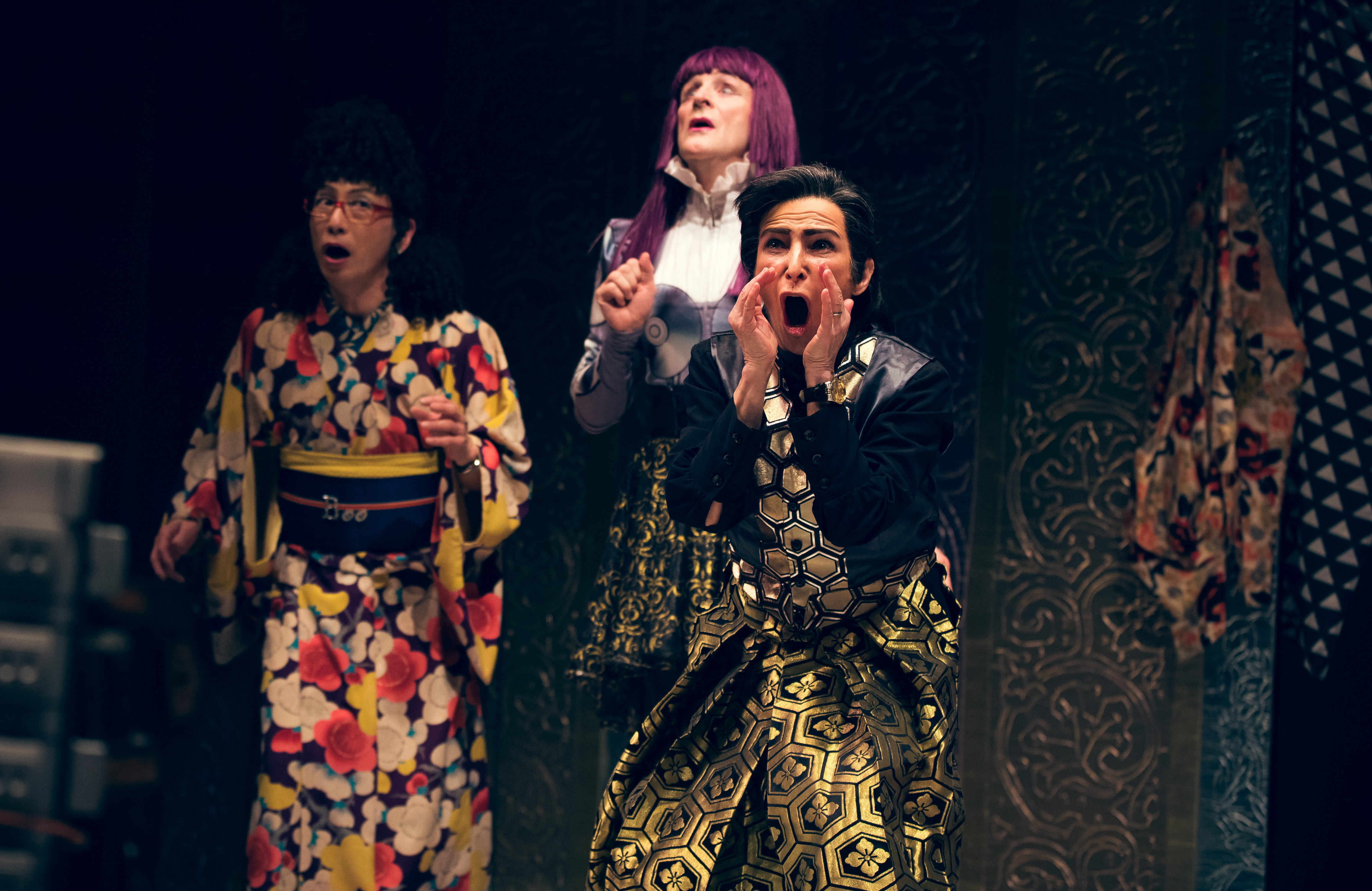 Hideki Noda
Mother (Boo)
Playwright, Director, and Actor
Artistic Director, Tokyo Metropolitan Theatre
Born in Nagasaki Prefecture in 1955, Noda is a playwright, director, and actor. He became the artistic director of Tokyo Metropolitan Theatre as of July 2009 and is currently professor at Tama Art University. Noda launched his first theatre company, Yume no Yuminsha (Dreaming Bohemian) while still a student at the University of Tokyo, creating many works to much acclaim. After disbanding Yume no Yuminsha in 1992, he went to study in London. On his return in 1993, he established a theatre production company called NODA∙MAP. Since then, presented a succession of major hits, including Kill, Pandora no kane (Pandora’s Bell), Oil, Akaoni (Red Demon), THE BEE, THE DIVER, The Character, Egg, Gekirin, Footprint Princess, and In the Forest, Under Cherries in Full Bloom. He has collaborated with the Kabuki actor Nakamura Kanzaburo XVIII, adapted Kabuki plays and directed productions of his original versions of the classical Kabuki pieces at Kabuki Theatre, such as Tragedy of Togitatsu, Nezumikozo, and more. Noda is also actively involved in international productions, working with British, Thai and Korean actors. He won most of the major drama awards in Japan, and was awarded the 2009 Asahi Prize. He was appointed an Honorary Officer of the British Empire (OBE) in October 2009 and the Medal with Purple Ribbon (for contributions to education and culture) in June 2011. He toured THE BEE English Version around New York (Under the Radar Festival), London (Soho Theatre), Hong Kong (Hong Kong Arts Festival), Tokyo (Suitengu Pit, Tokyo Metropolitan Theatre), Jerusalem (Israel Festival), Seoul (Myong Dong Theatre), Sibiu (Sibiu International Festival), Paris (Theatre National de Chaillot), Luxembourg (Theatre de la Ville) and Recklinghausen (Ruhrfestspiele) in 2012–14. His Egg was invited to the main house of Theatre National de Chaillot in Paris in 2015. Egg was accepted by both media and audience of Paris having left powerful impact to them. In 2018, his legendary masterpiece In the Forest, Under Cherries in Full Bloom was invited to Paris again as one of the official participating programs of Japonismes 2018. In 2015, he devised a new movement called Tokyo Caravan, a leading project guiding the cultural program for the Tokyo 2020 Olympic and Paralympic Games. This movement pops up in various locations both in Japan and overseas such as Rio de Janeiro, Sendai, Fukushima, Roppongi, and Kyoto, to present a “Grand Cultural Circus.” t is a “traveling culture movement” that continues to create performances with new expressions by realizing “cultural cross-flow” between artists. “Tokyo Caravan” will hold “Tokyo Caravan in Hokkaido” at the Moerenuma Park Glass Pyramid on January 2020. In 2019, his latest production『Q』: A Night At The Kabuki, a theatrical adaptation of the Queen’s 1975 rock masterpiece A Night at the Opera, acquired great attention of Japanese theatregoers as well as abroad. He continues working energetically beyond genres and borders.

Lilo Baur
Father (Bo)
Born in Switzerland, Lilo Baur began her career as an actress in London. She appeared at the Royal National Theatre in Orestia directed by Katie Mitchell and at Shakespeare’s Globe in The Merchant of Venice directed by Richard Olivier. For The Three Lives of Lucie Cabrol directed by Simon Mc Burney, she won the Dora Award and the Manchester Evening News Award as best actress. As a member of Théâtre de Complicité (director Simon Mc Burney), she appeared in The Visit, Winter’s Tale, The Street of Crocodiles, Help I’m Alive and Light. In France, she interpreted Gertrud in La Tragédie d’Hamlet directed by Peter Brook, the Narrator in Debussy’s St.Sebastien with the London Philharmonic Orchestra at Châtelet.
She collaborated with Peter Brook on Fragments by Samuel Beckett and Warum Warum. She appeared in such films as Bleakhouse by Justin Chadwick, Don Quixote by Peter Yates, The Devil’s Arithmeti by Donna Deitch, The Way We Live Now by David Yates, Vollmond by Fredi Murer. She also appeared in the movie Bridget Jones by Beeban Kidron. She is also directing opera, Dido and Aeneas by Purcell, Ariane et Barbe Bleue by Paul Dukas at Opera Dijon, La Resurrezione by Hàndel in Paris, Lakmé by Léo Delibes, Opéra Comique in Paris, Le Petit Prince and La Conférence des oiseaux composed by Michaël Levinas. For the stage, she directed King stag by C. Gozzi, Winter’s Tale by Shakespeare, Fish love by Chekhov, Le 6éme Continent, a collaboration with Daniel Pennac. For the Comédie Française: Le Mariage by Gogol, La téte des autres by Marcel Aymé (which won the Prix Beaumarchais), La Maison de Bernarda Alba by Lorca, Aprés la pluie by Sergi Belbel and La Puce à l’oreille by Feydeau, which just opened this season.

Genichiro Tanaka
Musician
Genichiro Tanaka has been training under the maestro Denichiro Tanaka the Ⅱ since1989. He has graduated from Tokyo University of Arts and studied Traditional Japanese Music course, practical music course in 2011. In January 2016, he made his debut at Kabuki Theatre in Kuruwa Sanbaso. And in 2017, he succeeded to Genichiro Tanaka. Genichiro has performed for Hideki Noda’s “One Green Bottle” for Sibiu performance in 2019.

About Tokyo Metropolitan Theatre
Tokyo Metropolitan Theatre was opened in October 1990 by the Tokyo Metropolitan Government as a base to promote art and culture and its globalization among the citizens by presenting quality programs mainly in the fields of music, theatre, opera, and dance. The theatre features a Concert Hall, which is designed exclusively for classical music presentations and boasts one of the world’s largest pipe organs, and a Playhouse, Theatre East and Theatre West for plays and dance performances. The theatre is also equipped with four exhibition spaces, large/small meeting rooms, and rehearsal rooms, and is capable of serving multiple purposes in artistic activities by the citizens in addition to actual performances on stage, from art exhibitions to lectures and workshops. Currently, the theatre is operated under the management of the Tokyo Metropolitan Foundation for History and Culture.

A variety of unique music programs have continuously been planned by and presented directly at the theatre, including concerts and lectures that feature our beautiful pipe organ, one of the highlights of our facilities. The theatre also regularly offers classical concert programs with a business partnership with the Yomiuri Nippon Symphony Orchestra, Tokyo. “Theatre Opera” is another quality music program that is popular at the theatre, where the audience enjoys “semi-staged” opera programs.

With its mission to serve as a core facility of new culture, the theatre has also been actively presenting original theatrical productions as well as cosponsored/tie-up programs with outside organizations known for their outstanding artistic performances. In July 2009, the theatre welcomed Hideki Noda, one of the most successful figures in today’s theatrical communities in Japan, as its first artistic director so as to pursue further advancement in creative activities and to bring about more quality projects at the theatre. Since then, with supervision of Noda, the theatre has been introducing the audience to a wide variety of programs, from modern versions of classical pieces to experimental works that would not be categorized in any conventional theatrical genres.

On September 1, 2012, the theatre reopened to the public after completing the major renovation that began in spring of 2011 and is ready to serve again the citizens as Tokyo’s flagship theatre for music and performing arts. Look forward to continued progress to create a theatre where art and culture are born; talents and education are supported; people are invited; and intercultural communication is promoted.

Supported by The Japan Foundation

“I would strongly recommend One Green Bottle. It’s a rare vintage, full of comic moments and artistic flourishes. In biblical terms, it’s new wine in old wineskins, and it bursts at the seams with flawless comic timing. Best of all are the countless sly references to Japanese theatrical forms. Apart from noh, there’s kabuki in the actors’ poses and Tanaka’s Foley work, bunraku puppetry in the hilarious bit with the stuffed dog, and probably many more that sailed over my Western head. The production as a whole reminded me of the paintings of Takashi Murakami. There is so much colour, so many references, so much going on, that one is simply overwhelmed—with laughter and admiration.” – Sebastian Middlesex, Reviews from the Underground

“Impulsive Japanese absurdist farce.  I can’t think of any other way to describe what I saw the other night.  It’s wild, it’s zany, it’s technically astute, smashing together eastern and western theatrical practices steeped in history into an absurdist tale with reminiscences, for me, of Sarte, ancient Kyogen practices, and the film Parasite.” – David Walters, Front Row Center

“What makes One Green Bottle work so well is that it’s not all ruthless backstabbing. Yes, it’s a lot of fun watching this dysfunctional family unravel. But at their most vulnerable moments of desperation is when some honest moments emerge, and real tenderness can be felt.” – Tami Shaloum, Round The World Stage

“Hideki Noda is a master of the theatrical endgame.” – The Guardian