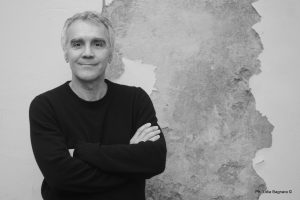 Italy’s Teatro delle Albe will share one of their most significant contemporary theatrical stories with the American audience. Martin Segal Theatre Center’s director Frank Hentscher – who curated the Italian Playwrights Project with Valeria Orani (Umanism NYC and 369gradi) – will lead the conversation with Marco Martinelli at La MaMa on December 13. The evening will be supported by a short reading from Martinelli’s play “Rumore di acque” (Noise in the Waters) translated in English by Thomas Simpson, with the interpretation of actor Rocco Sisto.

The conversation will focus on the writing of Marco Martinelli and on his latest work:  fedeli d’Amore, un polittico in sette quadri per Dante Alighieri, (a Polyptych in Seven Panels for Dante Alighieri). The unusual participatory work is Marco Martinelli’s reflection on Dante Alighieri and the contemporary world. Dante, himself a refugee, fled from Florence when he was sentenced to death by burning at the stake. We meet Dante on his deathbed in 1321, exiled in Ravenna, the home of the Teatro delle Albe. Ermanna Montanari will close the evening with a short excerpt of the play in Italian with English captions.

The Project was first launched in 2015 with the aim of promoting Italian contemporary drama in the US. It is curated by Valeria Orani, the director of New York-based Umanism and Italian production 369gradi, and by Frank Hentschker, the director of the Martin E.Segal Theatre Center – Graduate Center CUNY.

Following the Artist Talk, La MaMa invites you upstairs to the Ellen Stewart Theatre
to attend the World Premier Opening of TERRA MIA by Ondadurto,
an exciting new Italian Company making their American debut.
For a deeply discounted ticket for this opening night performance
use code: MARCO

Marco Martinelli, playwright and director, founded the Teatro delle Albe (1983) with Ermanna Montanari, it has become one of the most respected contemporary Italian theatre companies. Martinelli has been awarded numerous prizes including: five Ubu Prizes; the Drammaturgia In/Finita Prize; the Hystrio Prize; the Golden Laurel-international Festival Mess; and the Prize for Career Achievement- international festival Journées théâtrales de Carthage. His texts have been published and staged in Italy, France (selected by the European projects on contemporary playwriting Face à Face and Fabulamundi), Belgium, Germany, Romania, Slovakia, Chile, Brazil and the United States (translated in English by Thomas Simpson).

Ermanna Montanari, actress, author and set designer, is Teatro delle Albe’s co-founder and artistic director with Marco Martinelli. For her work, and in particular for her extraordinary itinerary of vocal and musical research, she has been awarded prestigious acknowledgements including: three Ubu Prizes, the Golden Laurel-international Festival Mess; the Lo straniero Prize-dedicated to the memory of Carmelo Bene; the Eleonora Duse Prize, and the Prize of the Associazione Nazionale Critici di Teatro.

Rocco Sisto, has received an OBIE for The Winter’s Tale, an OBIE, a Drama Desk nomination and a Drama League Award for his role in the Broadway hit “Quills” and an Obie awards for Sustained Excellence. In film, he has been seen in several movies, such as the cult hit The American Astronaut, Donnie Brasco, Carlito’s Way, Illuminata, Frequency, Lorenzo’s Oil among many. His voice work includes Grand Theft Auto: San Andreas. On television, Sisto played young Junior Soprano in the HBO series The Sopranos. He has also appeared in Law and Order, Star Trek: The Next Generation, “Alias”, “N.Y.P.D. Blue”, “J.A.G.”, and CSI: Crime Scene Investigation. In theater, he is one of the founding members of Shakespeare & Co., and he has often acted in the New York Shakespeare Festival at the Delacorte Theater in New York. On Broadway and off-Broadway, he has appeared in numerous successful plays such as Quills, Amadeus, A Month in the Country, The Comedy of Errors, KAOS, “Souls of Naples “, The Harlequin Studies and Iphigenia 2.0, Treasure Island, and in “Enrico IV, a monologue” among many others.

Federico Rampini, is the US Chief Correspondent of La Repubblica. He has been based in New York since 2009. He is a White House correspondent, covering the international trips of US presidents. His previous assignment had been as the China and Asia bureau chief, based in Beijing, from 2004 to 2009. From 2000 to 2004 he was based in San Francisco as the West Coast, technology correspondent and global geopolitics columnist for La Repubblica. As a foreign correspondent he lived also in Paris, Brussels. A prolific writer, he is the author of more than twenty essays on immigration and globalization, technology, China, India. He is a member of the Council on Foreign Affairs, in New York and Washington DC.  Rampini is a frequent panelist on China at the Asia Society, in New York.

The Italian Playwrights Project has been created and curated by Valeria Orani, Director of Umanism in New York and of 369gradi in Italy and by Frank Hentschker Director of the Martin E. Segal Theatre Center (Graduate Center City University of NY). The project’s goal is to disseminate Italian contemporary writing for the theater in the USA and vice versa. The initiative will give continuity to the important artistic dialogue between the two countries which has been sporadic over the last 30 years. From its first US edition in 2015, The Italian Playwrights Project has brought to the attention of the American audience the most recent works of playwrights such as Lucia Calamaro, Elisa Casseri, De Florian-Tagliarini, Giuliana Musso, Fausto Paravidino, Armando Pirozzi, Michele Santeramo, Fabrizio Sinisi, some of which have been fully translated and published in the USA. tOn the Italian side, on 2017 started the American Playwrights Project, it has taken to Italy works by the American Playwrights Mariana Carreño King, Amy Herzog,  and Cori Thomas.

La MaMa Experimental Theatre Club is dedicated to the artist and all aspects of the theatre. La MaMa’s vision of nurturing new artists and new work remains as strong today as it was when Ellen Stewart first opened the doors in 1961. La MaMa has presented more than 5,000 productions by 150,000 artists of all nations, cultures, races and identities. Cultural pluralism and ethnic diversity are inherent in the work created on our stages. Here, artists find a supportive environment for artistic exploration, and audiences are part of the development of an artist’s work over time. A recipient of the 2018 Regional Theater Tony Award, and more than 30 Obie Awards and dozens of Drama Desk, Bessie, and Villager Awards, La MaMa has been a creative home for thousands of artists, many of whom have made lasting contributions to the arts, including Blue Man Group, Ping Chong, André DeShields, Harvey Fierstein, Diane Lane, Warren Leight, Michael Mayer, Bette Midler, Meredith Monk, David and Amy Sedaris, Julie Taymor, Marc Shaiman and Scott Wittman.

Casa Italiana Zerilli-Marimò was founded with the specific intent of spreading Italian culture outside of its national boundaries, with the belief that Italian culture belongs not only to the Italians but to whomever has the desire to get to know more about it. The principle that shapes the work of this institution finds adequate expression in the words of Erasmus of Rotterdam, “All we who are learned are Italians.” Casa Italiana, in fact, considers Italian culture an integral and necessary part of universal culture. For this reason, we seek to include it in the spectrum of American culture, addressing in particular university students studying Italian and Italian-American issues. The programs of Casa Italiana deal with literature, cinema and political and social reflection, all topics upon which Italy has for centuries founded its reputation and international prestige. On the other hand, in seeking to link the discourse on modernity to that of tradition, Casa has demonstrated itself to be open to the discussion of economic, ethical and juridical themes. Casa Italiana Zerilli-Marimò, with the diversity and meaningfulness of its cultural programs, houses and involves itself with prominent Italian artists, scholars and politicians, whose presence constantly engages new points of discussion, opening and encouraging dialog with Americans on Italian life and culture. Casa Italiana, faithful to its principles, collaborates with Italian centers and institutes, both public and private, that have the common objective of deepening and extending Americans’ understanding of Italian culture. http://www.casaitaliananyu.org

Valeria Orani: by the time she moved to New York in 2015, Valeria Orani had served as administrative director, coordinator, and producer in public and private Italian theatre institutions, and had provided support to a large number of artistic projects. She had established herself as a well-known promoter and producer of Italian creative talent through 369gradi, which she founded in 2003 as a center for innovative services to promote and distribute Italian culture, particularly contemporary art and the performing arts. In 2014, Valeria Orani established a transoceanic pilot project which aimed to promote the work of professionals in the contemporary world of Italian arts and crafts in New York City. She founded Umanism LLC in 2015. “Umanism” is the crasis or combination of the Italian word “umanesimo” and the English word “humanism.” Umanism functions as an open platform to support European arts in New York City and American arts in Italy.   www.umanism.com  and    www.369gradi.it

The Martin E. Segal Theatre Center: The Segal Center bridges the gap between the academic and performing arts communities through dynamic public programs and digital initiatives that are free and open to all. Home to theatre artists, scholars, students, performing arts managers, and the local and international performance communities, the Segal Center provides a supportive environment for conversation, open exchange, and the development of new ideas and new work. Year round, the Center presents a wide variety of FREE public programs which feature leading national and international artists, scholars, and arts professionals in conversation about theatre and performance. Programs include staged readings to further the development of new and classic plays, festivals celebrating New York performance (PRELUDE) and international plays (PEN World Voices), screenings of performance works on film, artists in conversation, academic lecture series, televised seminars, symposia, and arts in education programs. In addition, the Center maintains its long-standing visiting-scholars-from-abroad program, publishes a series of highly regarded academic journals, as well as single volumes of importance (including plays in translation), all written and edited by renowned scholars.   www.theSegalCenter.org