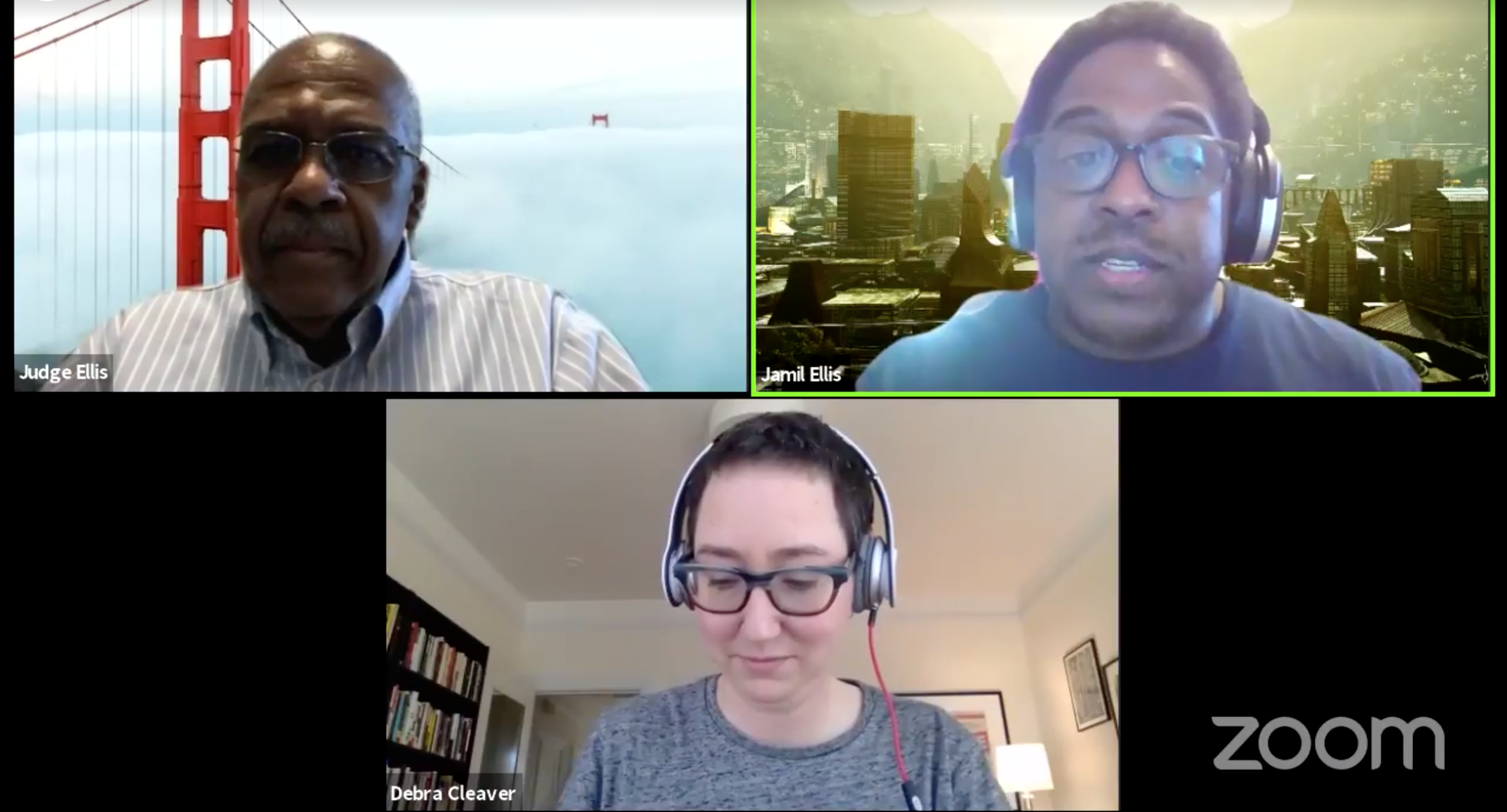 The hosts of Ellis Conversations, Jamil Ellis and his father, retired Federal Magistrate Judge Ronald Ellis in converation with CEO and founder of VoteAmerica, Debra Cleaver

The hosts of Ellis Conversations, Jamil Ellis and his father, retired Federal Magistrate Judge Ronald Ellis, discuss their podcast on the historical role of law in shaping the societal structures which act as barriers to attaining the American dream.  They discuss why “legal” is not a synonym for “moral” and why law, a prime actor in creating the problems, can and should be a part of the solution.

They are joined by CEO and founder of VoteAmerica, Debra Cleaver, as they discuss their recent episode on efforts to remove barriers to voting in America, ranging from the recent Wisconsin primary to the district court decision in the Florida felon enfranchisement case to the importance of vote by mail programs for the 2020 Elections.

Join them for a lively discussion as they discuss their latest episode on voting as well as some highlights from the series which has been increasingly relevant as the country grapples with race relations in 2020.

You can join this event by tuning in on this page, or the CultureHub watch page, or LaMaMa’s Facebook page to watch and join the conversation.

Debra Cleaver is the founder and CEO of VoteAmerica, a national nonprofit leveraging research-driven campaigns to drive Vote by Mail for the 2020 Elections. Debra is a serial founder whose organizations include Vote.org (2016), ElectionDay.org (2018), Long Distance Voter (2008), and Swing the State (2004). Debra is an alum of Pomona College and Y Combinator, and a former Draper Richards Kaplan Fellow for Social Entrepreneurship. Debra frequently speaks on issues impacting voter turnout, with appearances at SXSW, Harvard Law, the Harvard School of Government, and University of Michigan. Debra’s work has been featured in The New York Times, The Washington Post, MSNBC, C-SPAN, WIRED, Bloomberg, The BBC, Forbes, and more. When she’s not working, Debra is probably sleeping, since she has learned the hard way that her “passion projects” have a way of turning into national organizations. https://www.voteamerica.com/

Jamil Ellis is a NY native that lives at the crossroads of technology and creativity. Currently he is fighting climate change as CTO of Bright Power. At Bright Power, the mission is threefold. Increase the performance and value of buildings. Improve the comfort, health, and productivity of occupants. Eliminate negative impacts on the planet. Before joining Bright Power, Jamil led technical teams at BlocPower, HBO, Major League Baseball Advanced Media, and the NFL. He also serves on the board of CultureHub where he is excited to support their efforts to explore how the internet and digital technologies can foster a more sustainable model for international exchange and creativity. He spends his spare time creating opportunities to increase diversity in technology and creating content such as Ellis Conversations.

Retired Judge Ronald Ellis has a degree in chemical engineering from Manhattan College and a law degree from New York University.  Judge Ellis joined the staff at the NAACP Legal Defense & Educational Fund, Inc. in early 1976. There he specialized in fair employment class action litigation.  In 1984, Judge Ellis assumed the directorship of the Fund’s national litigation program in fair employment and held that post until 1990, when he became the Director of the Fund’s Poverty & Justice Program, which addressed the problems of families and individuals in poverty, including cases involving access to health care, school equity, low-income housing, and environmental justice. In 1993, Judge Ellis was appointed a United States Magistrate Judge for the Southern District of New York. Among the cases he presided over were (1) a 1999 case in which he held that a potential witness who had been intimidated into not testifying had standing to sue his intimidator under a civil rights statute; (2) a 2002 case in which he barred the defendant from inquiring into the plaintiff’s immigration status where the plaintiff had alleged trafficking and involuntary servitude, false imprisonment, and violation of various minimum wage laws; and (3) the 2014 settlement of the Central Park Five wrongful conviction lawsuit. Beginning in 1984, Judge Ellis has taught courses concerning race and law at New York University, New York, and CUNY law schools. During his twenty-four years on the bench, he had more than 40 law clerks from a dozen law schools and more than 200 interns from more than twenty law schools.