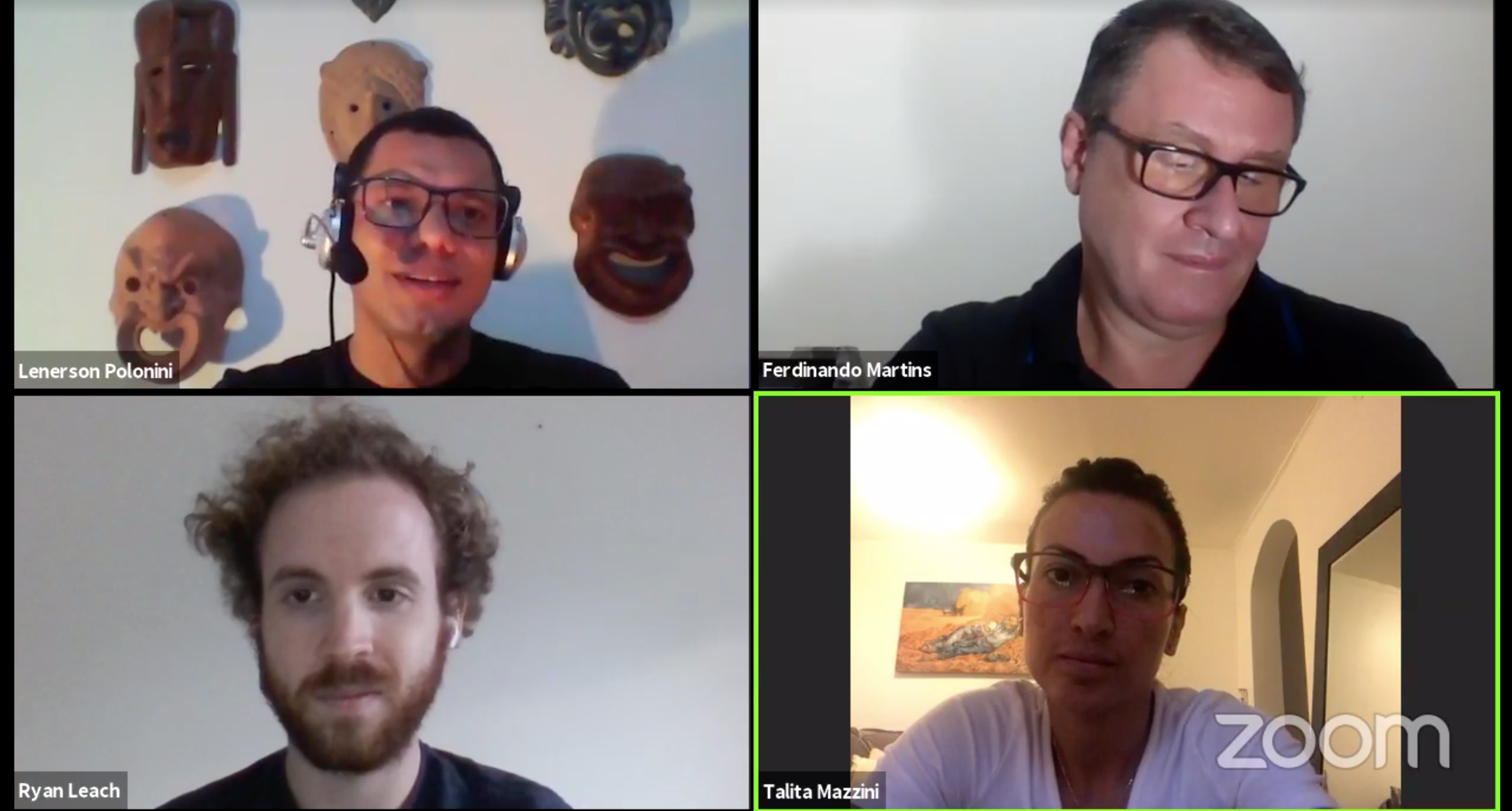 La MaMa LiveTalks Weekly conversations with artists, activists and thought leaders from around the country and around the world who join in discussions about art and life in time of crisis.

This discussion presents a brief overview of Brazilian experimental theater, based on works carried out by Brazilian stage directors Lenerson Polonini, director of Companhia Nova de Teatro; Marcos Bulhões, from Desvio Coletivo and Ferdinando Martins, from the São Paulo University. In this event, guidelines and concepts that guide the creation of the works of these two experimental theater groups will be discussed, as well as a brief summary of Professor Ferdinando Martins’ research on censored creations and artists in the current political context since 1988. Comments and Translation: Talita Mazzini.

Lenerson Polonini will talk about the creation of the “Companhia Nova de Teatro”, with his partner Carina Casuscelli. He will reflect about the creations of recently repertoire of the group: Noise in the Water, by Marco Martinelli and directed by Carina Casuscelli, The Richard Foreman Trilogy project, made in Brazil and directed by Polonini, with the plays: Bad Boy Nietzsche, Old Fashioned Prostitutes and specially The Gods Are Pounding My Head, containing an experimental play in Brazilian Amazonia context.

Marcos Bulhões will talk about BLIND, an urban performance presented as an open work that refers to different readings: the reduction of our existence to the productive function and consumption, overwork, imprisonment and petrification of life, automation of daily life, ethical degeneration that is spreading at the present stage of society.  He also will talk about “Banho de Descarrego” is a Brazilian performance that stages the removal of fascist ideologies and practices from the social body through the public washing of painted bodies covered in swastikas.

Ferdinando Martins will discuss how although it is officially banned in Brazil since 1988, censorship has never ended in fact. In recent years it has been merged with fake news and used as an instrument to reinforce right wing politics and its voters. In this speech, Ferdinando will show recent cases of censorship in Performing Arts and its relations to political and ideological conflicts.

Lenerson Polonini is a theater director, light designer and producer. A researcher and visual, hybrid, and performative theater artist who graduated at the Estácio de Sá University (BA – Theater) and he started his studies in theater at the Drama School “O Tablado” in Rio de Janeiro, in 1998-99. He founded the Companhia Nova de Teatro and developed researches on the work of Samuel Beckett and on the visual scene of the 20th century. Polonini directed “Act without Words I and II” in 2001, “Beckett in Repertorie” with participation of the actor Paulo César Pereio, “Berceuse”, French version of “Rockaby”, with Renée Gumiel in 2002 and “Beckett in Repertorie 2” in 2003, “Beckett in Repertorie 3” and “Ulysses” in 2005. With the Companhia Nova de Teatro, he won first place in the “Prize Internazionale Teatro dell ‘inclusione Teresa Pomodoro 2012”, in Milan, Italy, with the play “Caminos Invisibles … La Partida” as artistic director. The award jury was composed by Eugenio Barba, Luca Ranconi, Jonathan Mills, Lev Dodin and Livia Pomodoro. In 2015/17, he directed Foreman Trilogy Project  (Bad Boy Nietzsche, Old- Fashioned Prostitutes and The Gods Are Pounding My Head) by Richard Foreman with support from Secretary of Culture of São Paulo State and SESC São Paulo. In 2019, he directed the “Kassandra Hecuba” project, a work in progress in Analogio Festival in Athens, 25 Ore Theatre Festival Non Stop ( Sibiu),  and Teatrul de Artã, in Bucarest, both in Romania.

Marcos Bulhões is an artistic director, curator, actor, and professor at the University of São Paulo, where he teaches in the Graduate Program in Performing Arts and co-directs the Laboratório de Práticas Performativas. He is a Professor of the Department of Performing Arts, University of São Paulo (USP), where teaches Artistic Direction, Contemporary Staging, Performance and Pedagogy and Creation Processes on undergraduate course in Performing Arts. He is also professor and researcher at the Graduate Program in Performing Arts at USP, where served as vice-coordinator and assistant editor of academic journal Sala Preta (A1) between 2011 and 2017. Member of the Council of the Department (CAC) and the Relations Commission the USP School of Communications and Arts. He holds a Master’s and PhD in Performing Arts from USP. He was a public school teacher for ten years and worked as a university professor in Natal from 1997 to 2008. He is one of the founders and artistic directors of Desvio Coletivo, a São Paulo performance group that won national and international awards. He is one of the authors and directors of performance CEGOS, which has circulated through more than 40 cities in Brazil, Africa, Asia and North America. He is one of the founders and coordinators of the research group Laboratory of Performative Practices of the University of São Paulo and has been developing and directing several researches of scientific initiation, master’s and doctorate in Pedagogy and Creation in Performance, Urban Intervention and Performative Theater, contributing to a cartography of the creation and learning of performative practices in Brazil.

Ferdinando Martins received a Ph.D. at Department of Communications and Arts, University of São Paulo (CCA / ECA / USP). He is a professor of undergraduate courses in Educommunication and Performing Arts. Professor, researcher and advisor of the Postgraduate Program in Performing Arts, USP. Member of the Culture and Extension Council of ECA/USP. Representative of ECA/USP in the Deliberative Council of the Institute of Brazilian Studies, IEB/USP. Director (2014-2018) and vice-director (2010-2014) of the Theater of the USP, the Pro-Rector’s Office of the University of São Paulo. Culture and University Extension, TUSP/PRCEU. General coordinator and curator of the International Theater Biennial of USP (2012-2018). Coordinator of the USP Diversity/Nucleus of Direct Program of PRCEU (2011-2015). Coordinator of the Cultural Cooperation Agreement between USP and the National Autonomous University of Mexico (2012-2015). Holds a master’s degree (1998) and a Ph.D (2004) in Sociology (USP). Member of the Queer Futures working group of the International Federation for Theater Research. Develops researches in the areas of History of Performing Arts, Theater Theories, Theater Philosophy, Brazilian Theater, Performance Studies, Queer Theory, Genre; Subjectivities, Cultural Production.

Founded in 2001 by director Lenerson Polonini and the actress and costumer designer Carina Casuscelli, Companhia Nova de Teatro develops a continuous research encompassing performance, body arts and visual arts. Companhia Nova de Teatro is an open company which invites actors, dancers and artists from several fields to collaborate with its productions at every new project. The multimedia theater developed by Companhia Nova de Teatro explores the stage tridimensionality and connects art and urban space. The performative acting privileges the physical aspect of actors on the stage, where they do not play “roles”, but act as icons, images and vehicles through which the audience can receive multiple visual and sounding events as if they were inside a box of sensational stimuli. Currently the company is working on “Noise of Water” about African immigrants in boats in the Mediterranean Sea by italian playwright Marco Marco Martinelli, directed by Carina Casuscelli, sponsored by Secretary of Culture of São Paulo. More information: http://www.cianovadeteatro.com

Desvio Coletivo and Laboratório de Práticas Performativas from USP is a network of creators in a contemporary theatrical scene that works in the border zone between theater, performance and urban intervention. Through the creation of performance, shows and scenic interventions in different urban spaces, the group develops actions that generate islands of ephemeral disorder of critical nature. Since 2011, the group has been researching collaborative scenic creation, aiming at experimenting with different modalities of sensorial, dialogical and creative participation of the viewer, displacing its conventional role, whether as an actor, co-creator of the scenic speech or as a member of a psychophysical immersion atmosphere. https://www.desviocoletivo.com.br