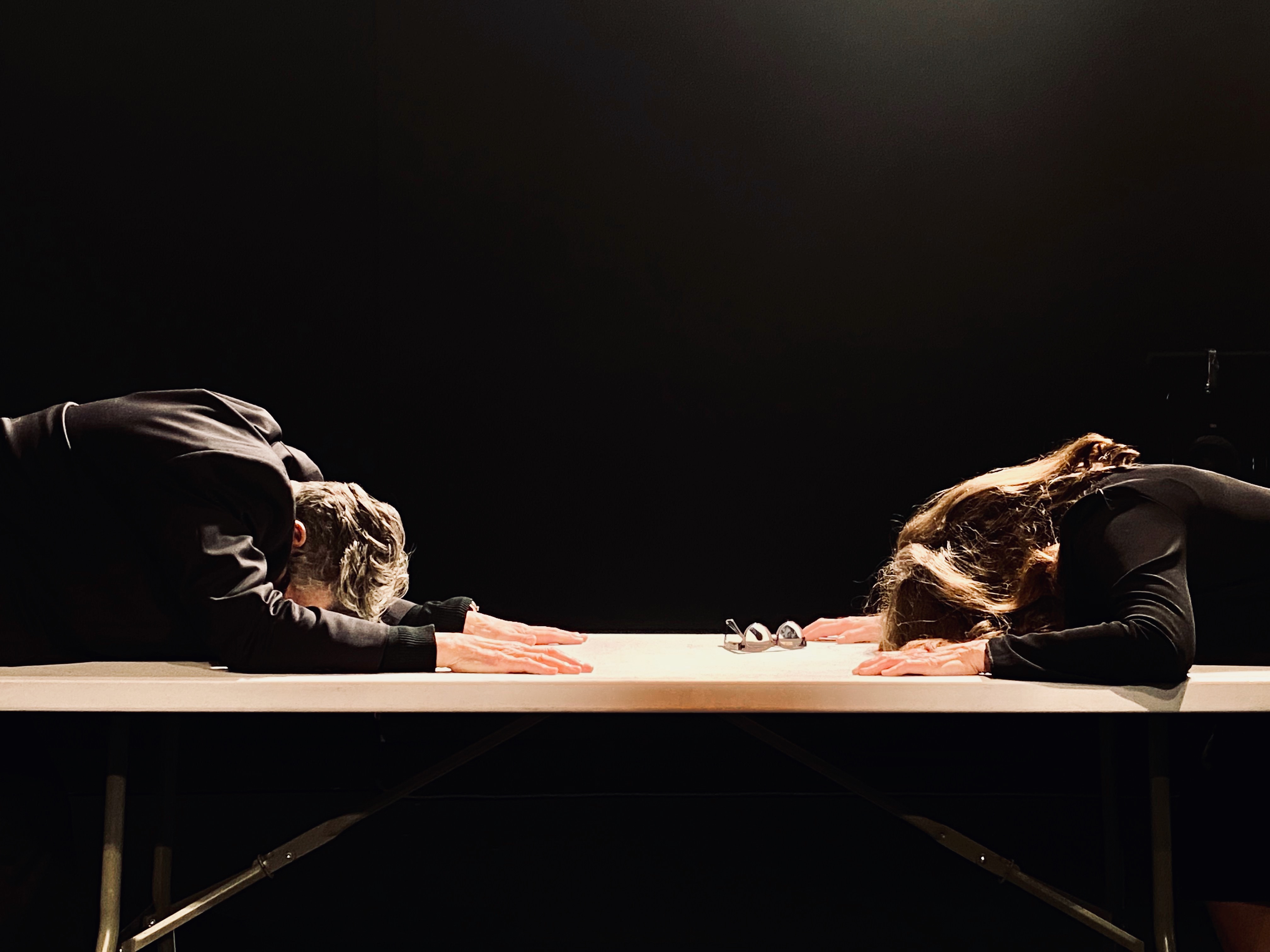 “How to survive a loss. First you recalibrate…”

Landing somewhere between the realms of the live and the virtual, present and absent, between staying home and venturing out, Peggy Shaw and Lois Weaver combine spoken word, movement and Zoom technology to respond to the world we now find ourselves in.

In early 2020, these two icons of lesbian-feminist theatre set out to present Last Gasp, a live performance questioning demise: the demise of aging bodies, civil conversations, and a sustainable planet. The pandemic arrived and knocked the breath out of us, as did a period of civil unrest that marched under the banner of ‘I can’t breathe.’ The ironies were not lost as the duo locked down, stayed in and continued their investigations resulting in a Zoom recording, Last Gasp WFH.

Now almost two years later, Last Gasp: A Recalibration gathers us in the same room but not as the same people. Reworking Last Gasp WFH for the physical stage, Shaw and Weaver unpick what it means to be in a theatre, and what it means to perform. With episodes entitled ‘The Trump in Me’ and ‘How to Set a Table in an Emergency’, the legendary performance duo brings us together to recalibrate - we are not coming to an end but finding strategies for moving on.

Introduced and moderated by Benjamin Gillespie Join Peggy Shaw and Lois Weaver and their collaborators for cocktails and an intimate discussion about the duo's latest performance, Last Gasp: A Recalibration. The evening will include a presentation from the current book project anthologizing more than a decade of work by Split Britches.

A Care Café is a simply a place for people to gather - their wits, thoughts and comrades in action. So many of us are wondering if we might be in the ‘last gasps’ of our democracy and so much seems to be riding on these upcoming elections. So, we decided to host a Care Café for our Democracy on Sunday 23 October just after the Last Gasp: A Recalibration matinee and just prior to the midterms. It will be a Sunday afternoon place to sit together informally, talk some, share some concerns and maybe even write a few post cards to encourage people to get out and exercise their right to vote. We hope that people will stick around if they have come to see the performance OR just drop by between 3:30 and 5:30.

We like to think of a Care Café as a venue for temporary community, informal conversation, and simple activity within a spoken and visible frame of ‘care’. It re-appropriates some of the aesthetic of café culture, with the arrangement of small tables and quiet conversation but hopes to dismantle the common social anxieties associated with these spaces: closed conversations between friends, difficulties approaching strangers and knowing where to sit and with whom. The tables offer simple activities like coloring, badge making and post card writing to ease the way for conversation. We invite people to come sit with us under this roof of care.

The Care Café was created by Lois Weaver as part of her Public Address Systems. 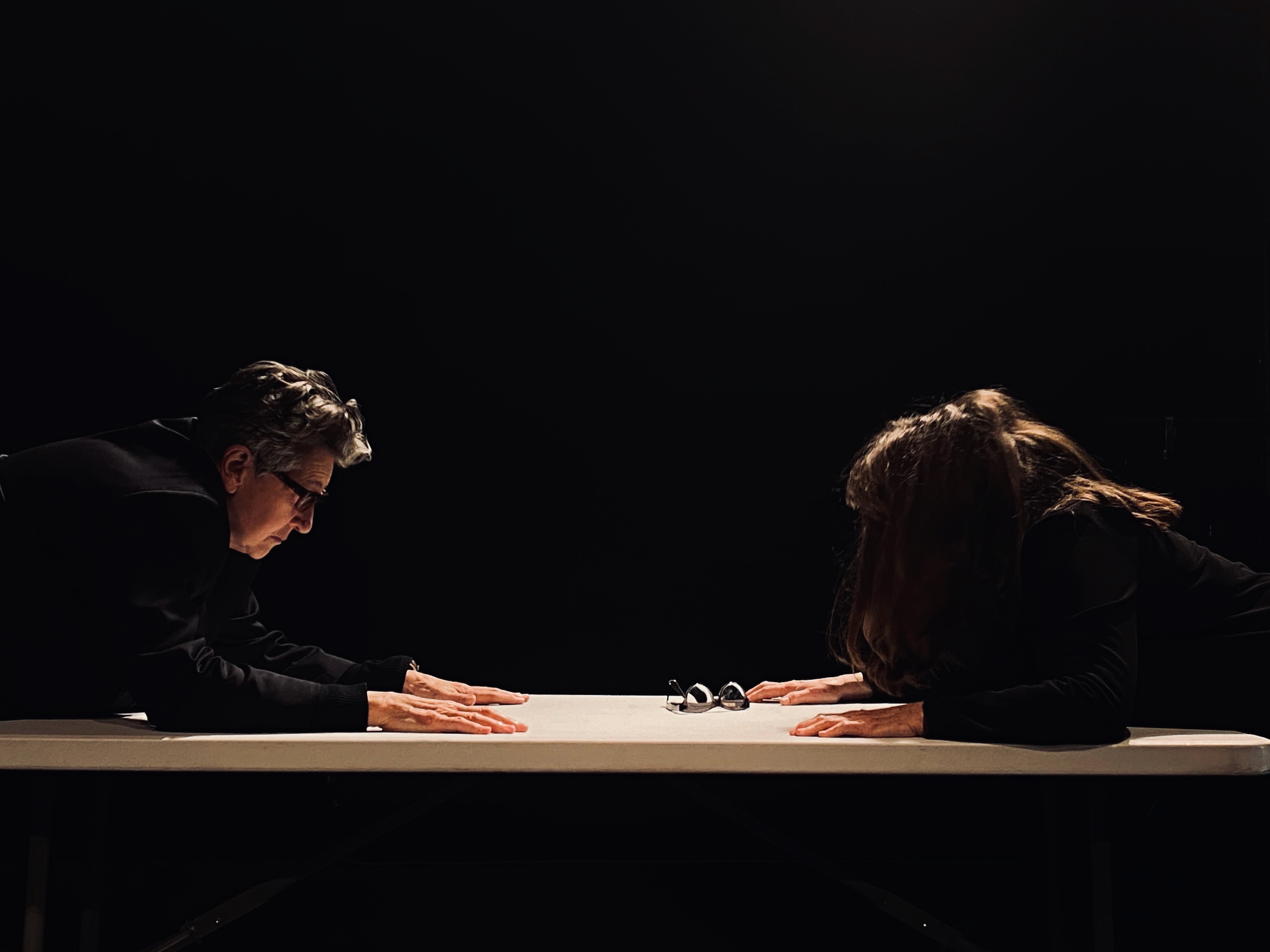 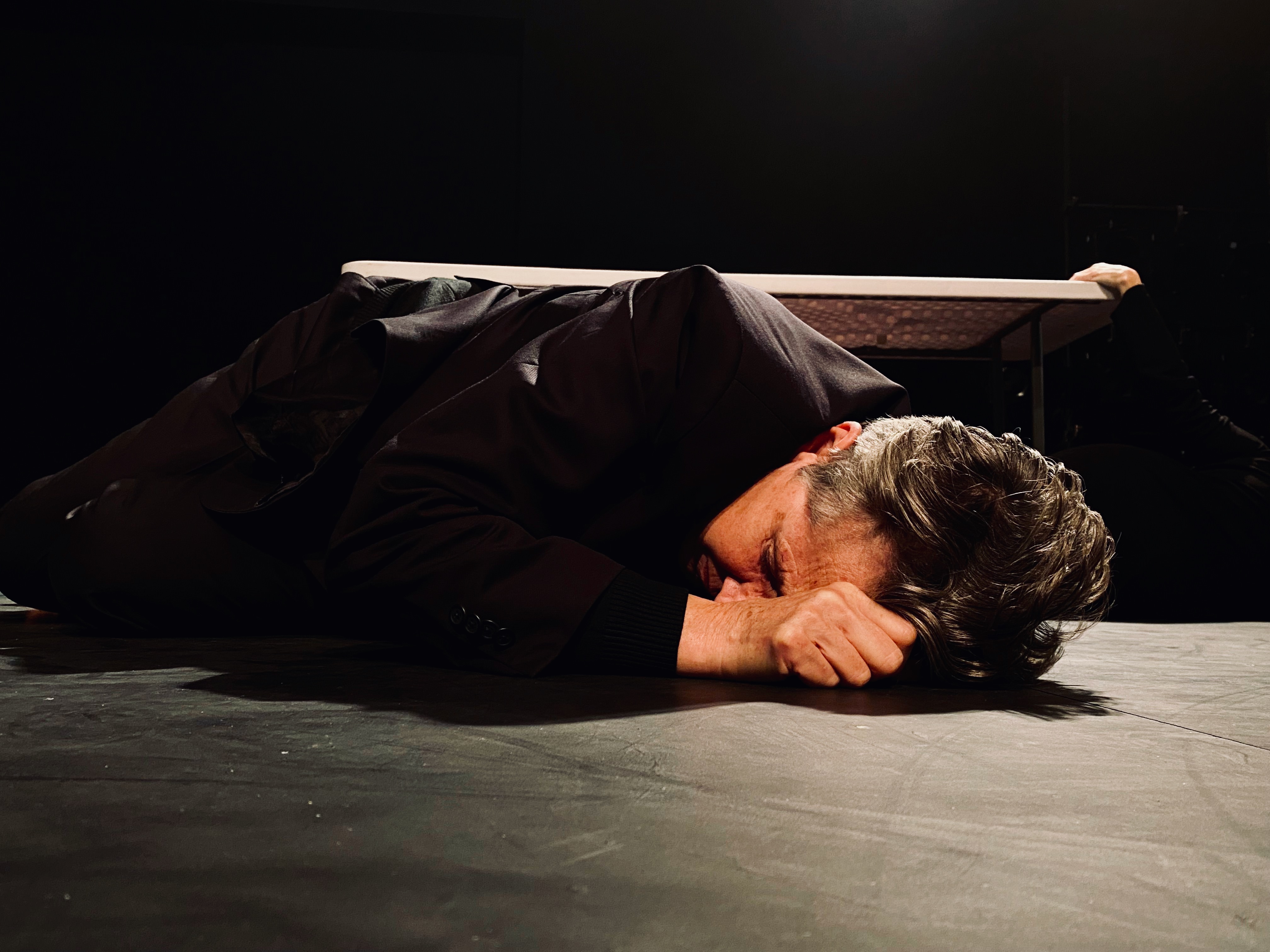 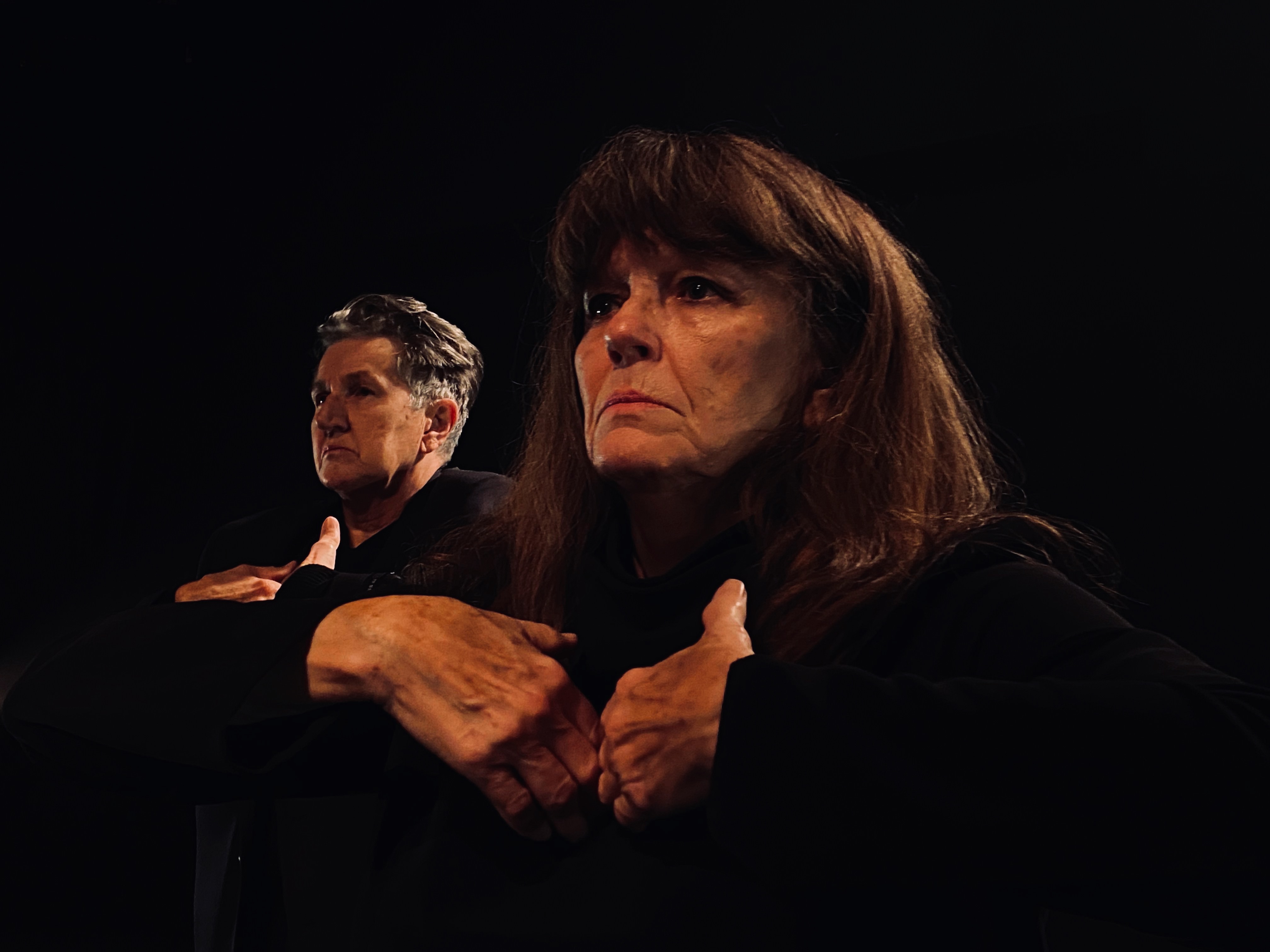 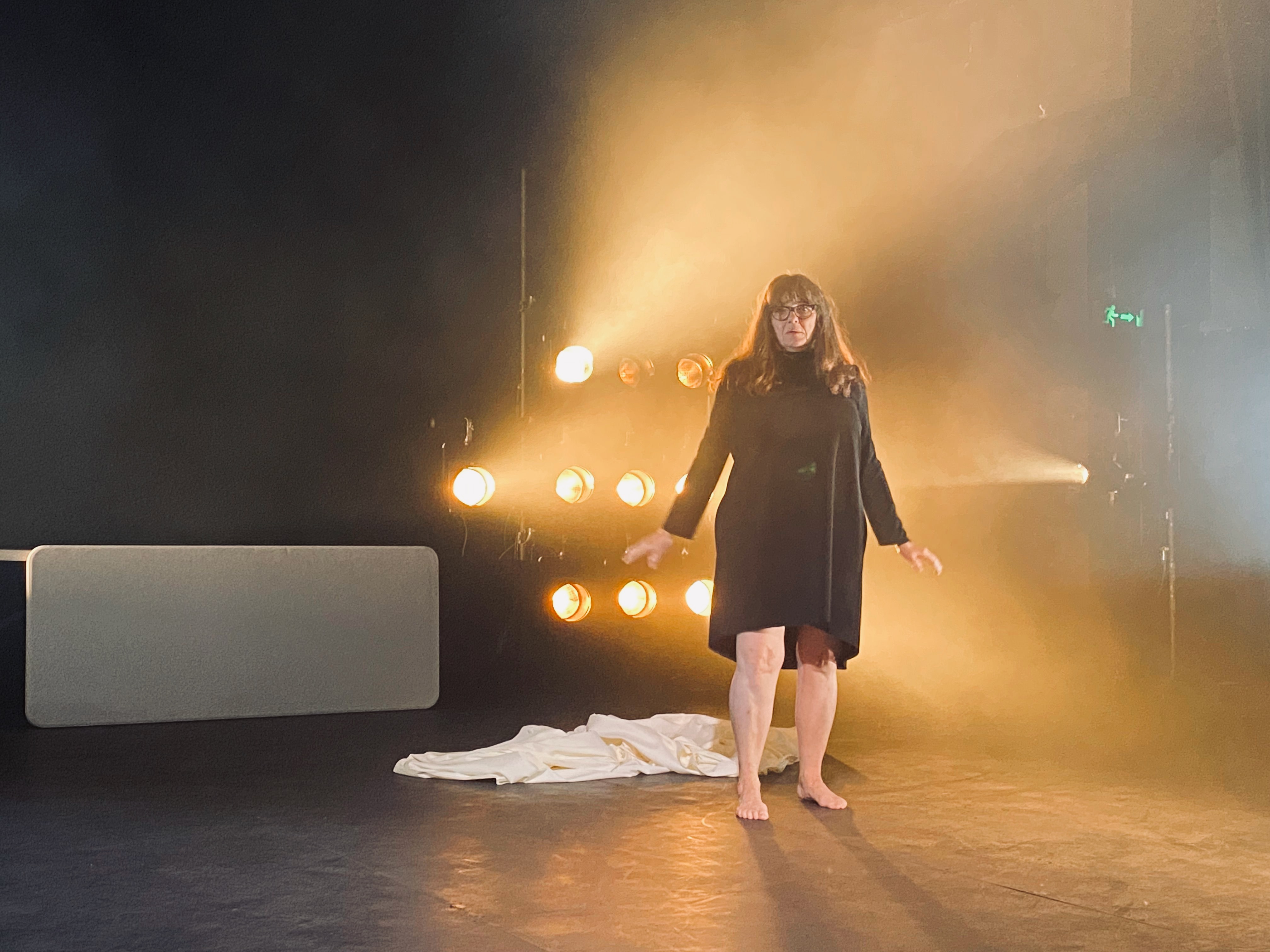 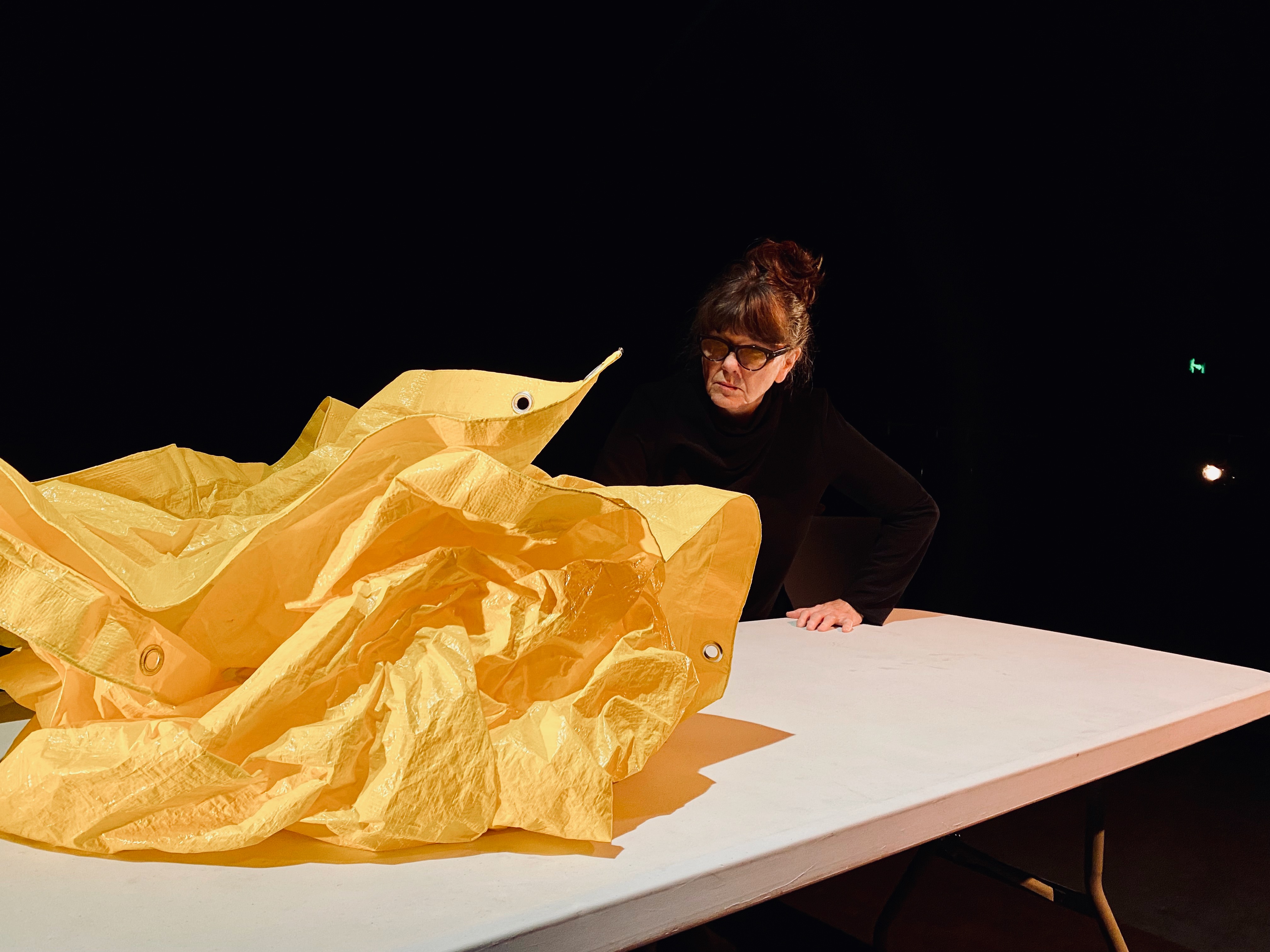 Lois Weaver and Peggy Shaw are co-founders of Split Britches .Since 1980, they have created an interconnected repertoire of performance and social engagement work, which is part of a larger, lifelong project to facilitate communication, wellness, and social change through performance.Recent projects include Ruff (2013), a performance exploring the experiences of having a stroke; Unexploded Ordnances(2018), a combination of performance and public conversation on subjects of anxiety, aging, and unexplored potential; and Last Gasp (2020), a meditation on demise—demise of aging bodies, civil conversations, and a sustainable planet. Over the 40 years, they also remain committed to collaborating with diverse communities. This manifests in the founding of WOW Café in NY; developing projects in domestic abuse safe houses in upstate NY and in LGBTQ+ communities in Minneapolis; collaborating with seniors on a performance about sex and aging; working in women’s prisons in Brazil and the UK: developing performance with Taiwan Women’s Theatre Festival and creating therapeutic workshops for stroke survivors.

Split Britches’ collection of scripts, Split Britches Feminist Performance/Lesbian Practice, edited by Sue Ellen Case, won the 1997 Lambda Literary Award for Drama. In 2012, Split Britches was presented with the Edwin Booth Award by City University of New York in honor of their outstanding contribution to the New York City/American Theater and PerformanceCommunity. BothLois Weaver and Peggy Shaw are Guggenheim Fellows and Peggy was the recipient of the Doris Duke and USA Artist Awards.

Lois and Peggy were named Senior Fellows by theHemispheric Institute of Performance in 2014, an award given to scholars, artists and activists affiliated with the institute whose work illustrates the highest achievement in the field of performance and politics. The company received a 2017 NY Innovative Theatre Award and the 2022 EllenStewart Career Achievement in Professional Theatre Award.

LOIS WEAVER is an artist, activist and Professor of Contemporary Performance Practice at Queen Mary, University of London. She is a 2014 Guggenheim Fellow and a Wellcome Trust Engagement Fellow for 2016–2018. Lois was co-founder of Spiderwoman Theater, WOW Theatre in NYC, and Artistic Director of Gay Sweatshop in London. She has been a writer, director and performer with Peggy Shaw and Split Britches since 1980. Recent performances include Unexploded Ordnances (2016-18); What Tammy Needs to Know About Getting Old and Having Sex (2015); and RUFF (2012). Her experiments in performance as a means of public engagement include Long Tables, Porch Sittings, Care Cafes and her facilitating persona, Tammy WhyNot. Lois’s performance practice and history has been documented and illustrated in The Only Way Home Is Through the Show: Performance Works of Lois Weaver, eds. Lois Weaver and Jen Harvie, published in 2015 by Intellect and the Live Art Development Agency. Lois was awarded the WOW Women in Creative Industries ‘Fighting the Good Fight’ award in 2018 and the 2019 Queen Mary Centre for Public Engagement Hawking Award for Developed Understanding of Public Engagement.

PEGGY SHAW is a performer, writer, producer and teacher of writing and performance. She co-founded Split Britches and WOW Café Theatre in NYC. She is a veteran of Hot Peaches and Spiderwoman. She is a 2019 Guggenheim Fellow, and a 2014 recipient of the Doris Duke Artist and 2016 USA Arts Award. In 2017, Peggy was awarded an honorary doctorate from Queen Mary University of London for her contribution to theatre and the institution. Peggy has received three NYFA Fellowships and three OBIE Awards. She was the recipient of the 1995 Anderson Foundation Stonewall Award and Foundation for Contemporary Arts Theatre Performer of the Year Award in 2005. Her book A Menopausal Gentleman, edited by Jill Dolan and published by Michigan Press, won the 2012 Lambda Literary Award for LBGT Drama. Peggy was the 2011 recipient of the Ethyl Eichelberger Award for the creation of RUFF, a musical collaboration that explores her experiences of having a stroke.

Vivian Stoll is a sound designer, audio engineer, music producer, and musician. She has created music and sound design for the Split Britches Company for over 20 years and has been a collaborator on several projects. Past musical credits include work with Unknown Gender, Isis, Malvina Reynolds, Penny Lang, Rosalie Sorrels, FrankMaya, Jon Kinzel, Rebecca Coupe Franks, Laurie Anderson, and Bitch among many others. Currently, she teaches sound design for film and animation students at the School of Visual Arts and enjoys working on independent music projects.Visit her website at www.vivianstoll.com.

Morgan Thorson is a choreographer, performer and activist based in Minneapolis, MN. Twice receiving the Sage Award for Outstanding Choreography (2006 & 2007), and a MacDowell Colony Fellow (2018, 2012), Morgan’s honors also include the Doris Duke Performing Artist Award (2016), and United States Artist (2012), Guggenheim (2010), and McKnight (2009, 2002) Fellowships. She has received support from the Maggie Allesee National Center for Choreography (2016, 2011, 2009) and in 2015 her installation, Still Life was featured in Local Time, a three-month exhibition at the Weisman Art Museum. From 2010–2016 she was a Creative Campus Fellow at Wesleyan University where she engaged students and professors in interdisciplinary practices, developing pedagogy in Dance, Archaeology, and Religious Studies. She is a Certified Skinner Releasing Technique practitioner.