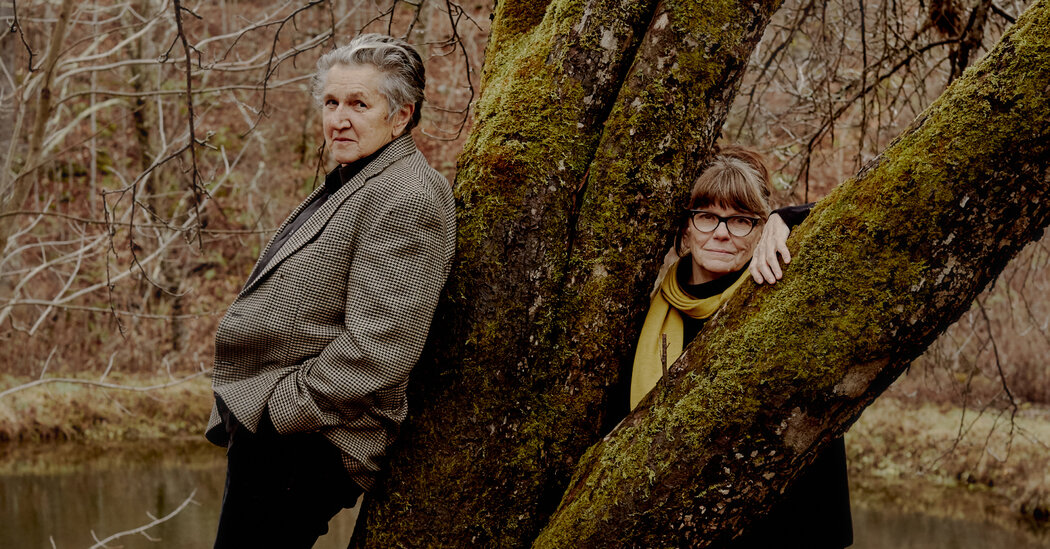 ‍"not just one of the 40-year-old company’s best pieces, but among the most evocative art to emerge from the Covid era"

Last Gasp WFH On Demand from La MaMa on Vimeo.

Last Gasp WFH, looks for ways we might catch our breath in these times of global uncertainty, considering our ‘last acts’, whether personal, political or environmental. Written and performed by Peggy Shaw and Lois Weaver of Split Britches, and created in collaboration with Nao Nagai, Vivian Stoll and Morgan Thorson, Last Gasp WFH is a series of verbal and physical essays that playfully dances through the dangerous intersections of permanence and impermanence, interdependence and care, knowledge and experience, narcissism and echoes.

In the wake of canceled performances, Split Britches were keen to maintain momentum for their new live work Last Gasp while having to ‘work from home.’ Last Gasp WFH was developed in a site-specific Zoom format using their quarantine-home as a structural visual anchor. A house becomes a stage for the experience of sheltering in place, serving both as an intimate capsule of sequestered time and an apt reflection on the precarious nature of our bodies and the planet we call home.

Experimenting with new ways of making and finding joy in a pandemic Split Britches collaborated with lighting and video designer and editor Nao Nagai, sound designer and composer Vivian Stoll, and choreographer Morgan Thorson to create a new format for performance that could be shared from a time of quarantine. Playing with the fragility of technology, particularly the unpredictability of Zoom, the team found new avenues to the classic Split Britches aesthetic of broken down theatrical conventions, exposing the self on stage.

Last Gasp WFH is made possible by the New York State Council on the Arts with the support of Governor Andrew M. Cuomo and the New York State Legislature, in addition to the Wellcome Trust, the Guggenheim Foundation, and the NYC Women’s Fund for Media, Music and Theatre by the City of New York Mayor’s Office of Media and Entertainment in association with the New York Foundation for the Arts. Research residencies for the development of Last Gasp were completed with the Guthrie Theatre, Metal Culture, Attenborough Centre for the Creative Arts, and the Barbican.

SPLIT BRITCHES Founded in New York in 1980 with Deb Margolin, Split Britches continues with the duo and solo work of Lois Weaver and Peggy Shaw which spans satirical, gender-bending performance, methods for public engagement, videography, digital and print media, explorations of ageing and wellbeing, and iconic lesbian-feminist theatre. Split Britches’ collection of scripts, Split Britches Feminist Performance/Lesbian Practice, edited by Sue Ellen Case, won the 1997 Lambda Literary Award for Drama. In 2012, Split Britches was presented with the Edwin Booth Award by City University of New York in honor of their outstanding contribution to the New York City/American Theater and Performance Community. Lois and Peggy were named Senior Fellows by the Hemispheric Institute of Performance in 2014, an award given to scholars, artists and activists affiliated with the institute whose work illustrates the highest achievement in the field of performance and politics.

Over the past 40 years Split Britches’ interconnected repertoire of performance and engagement work has rapidly expanded and projects have increasingly fed into the development of one another. Last Gasp is the result of research undertaken during the 2018-2019 Split Britches Call and Response Tour throughout the US and UK, a tour of the performances Unexploded Ordnances (UXO) and Retro(per)spective which housed sustained conversation in connected engagement activities and platforms.

LOIS WEAVER is an artist, activist and part time professor of Contemporary Performance at Queen Mary, University of London. She was co-founder of Spiderwoman Theater, Split Britches, WOW Café Theatre and Artistic Director of Gay Sweatshop in London. Lois is a 2014 Guggenheim Fellow and a Wellcome Trust Engaging Science Fellow for 2016-19. She was awarded the WOW Women in Creative Industries Award for Fighting the Good Fight in 2018. Her experiments in performance as a means of public engagement include the Long Table, the Porch Sitting, the Situation Room, the Care Café and her facilitating persona, Tammy WhyNot. Tammy collaborated with senior centers in NYC on What Tammy Needs To Know About Getting Old and Having Sex which premiered at La MaMa ETC, NYC in November 2014.

PEGGY SHAW is a performer, writer, producer and teacher of writing and performance. She co-founded Split Britches and WOW Café Theatre in NYC. She is a veteran of Hot Peaches and Spiderwoman. She is a 2019 Guggenheim Fellow, and a 2014 recipient of the Doris Duke Artist Award. In 2017, Peggy was awarded an honorary doctorate from Queen Mary University of London for her contribution to theatre and the institution. Peggy has received three NYFA Fellowships and three OBIE Awards. She was the recipient of the 1995 Anderson Foundation Stonewall Award and Foundation for Contemporary Arts Theatre Performer of the Year Award in 2005. Her book A Menopausal Gentleman, edited by Jill Dolan and published by Michigan Press, won the 2012 Lambda Literary Award for LBGT Drama. Peggy was the 2011 recipient of the Ethyl Eichelberger Award for the creation of RUFF, a musical collaboration that explores her experiences of having a stroke.

Vivian Stoll is a sound designer, audio engineer, music producer, and musician. She has created music and sound design for the Split Britches Company for over 20 years and has been a collaborator on several projects. Past musical credits include work with Unknown Gender, Isis, Malvina Reynolds, Penny Lang, Rosalie Sorrels, Frank Maya, Jon Kinzel, Rebecca Coupe Franks, Laurie Anderson, and Bitch among many others. Currently, she teaches sound design for film and animation students at the School of Visual Arts and enjoys working on independent music projects. Visit her website at www.vivianstoll.com.

Morgan Thorson is a choreographer, performer and activist based in Minneapolis, MN. Twice receiving the Sage Award for Outstanding Choreography (2006 & 2007), and a MacDowell Colony Fellow (2018, 2012), Morgan’s honors also include the Doris Duke Performing Artist Award (2016), and United States Artist (2012), Guggenheim (2010), and McKnight (2009, 2002) Fellowships. She has received support from the Maggie Allesee National Center for Choreography (2016, 2011, 2009) and in 2015 her installation, Still Life was featured in Local Time, a three-month exhibition at the Weisman Art Museum. From 2010 - 2016 she was a Creative Campus Fellow at Wesleyan University where she engaged students and professors in interdisciplinary practices, developing pedagogy in Dance, Archaeology, and Religious Studies. She is a Certified Skinner Releasing Technique practitioner.