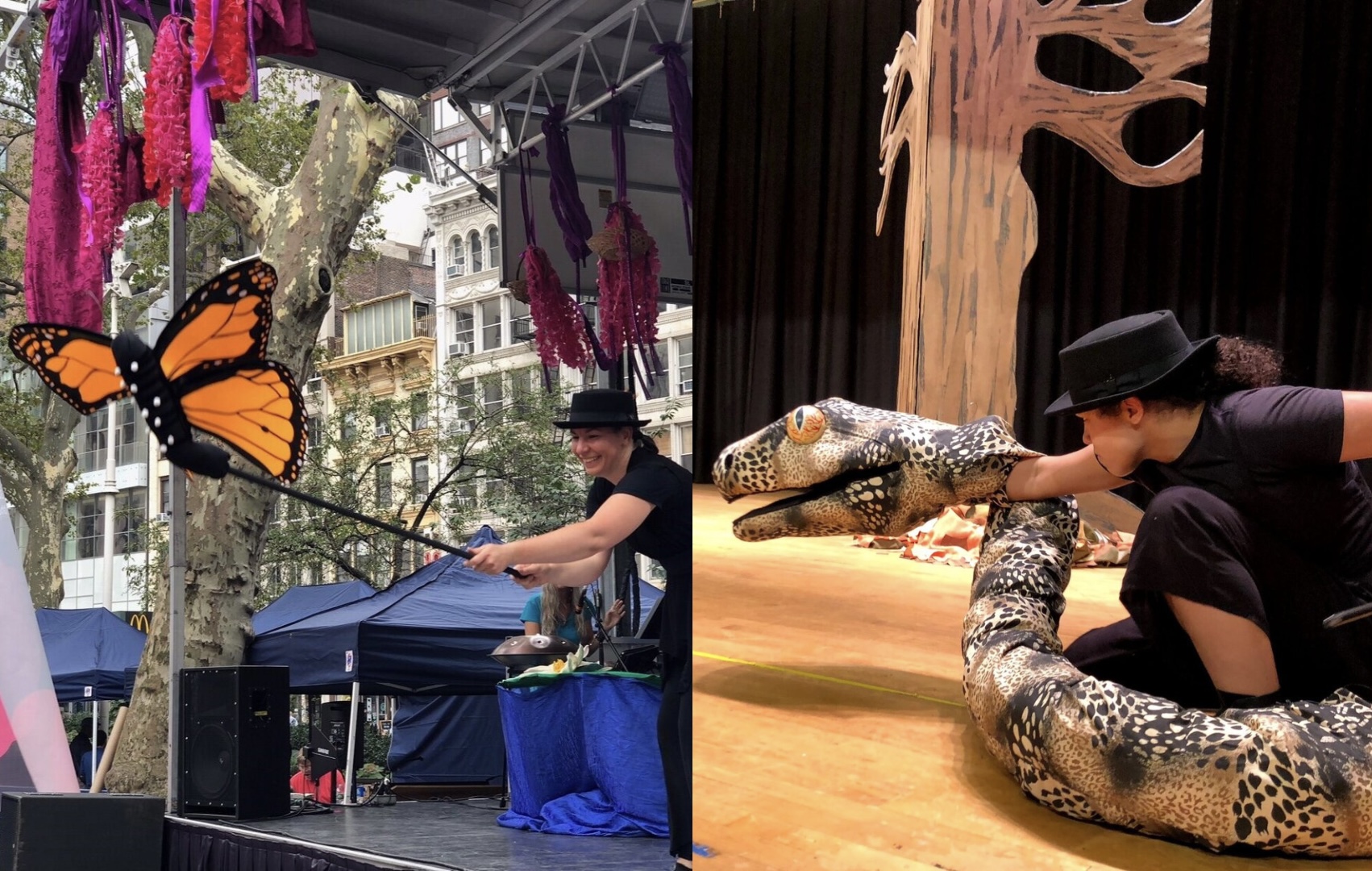 Saturday at 2PM
Sunday at 12PM

“Marvelous Metamorphoses” unravels to present bizarre and beautiful transformations in our world like caterpillar to butterfly, polliwog to frog, and more! In this performance we dance & sing our way through these cycles celebrating them for our sustained joy and ecological health on this planet. Do you want to hear a caterpillar rap? Your neurons may sparkle as we bring annual cycles to life through live music and the art of puppetry. Come and enjoy the marvels of nature and art together.

Sova Dance and Puppet Theater celebrates humanity and the environment by engaging audiences through live performance combining the moving body, puppetry, mask, video, dance, and artistic installations. The combined ingredients communicate that which cannot be described in words, and therefore are accessible to communities around the globe. “Sova” means “owl” in Slovak and also refers to an asteroid belt named by a Czech astronomer.

Adelka Polak, founder of Sova Dance & Puppet Theater, based in CT & mainly serving schools, arts venues and community organizations in New England and NYC, including recent performances at Madison Square Park and Jamaica Bay Wildlife Refuge. Adelka is a dancer, puppeteer, mask-performer and movement director whose work has brought her to Denmark, Bulgaria, the Czech Republic, Taiwan, Scotland and Turkey. In an original theatrical production of "Ajijaak on Turtle Island” at the New Victory Theater she worked with puppets from the Henson Creature Shop in a show led by artists Heather Henson, Jim Henson’s youngest daughter, and Grammy-Award winner Ty Defoe. She also worked with Squonk Opera who went “from junkyards to Broadway” and performed at Lincoln Center Outdoors and LaMama, E.T.C. with the Czechoslovak-American Marionette Theater of NYC. Ms. Polak was featured on CPTV’s “Spotlight on the Arts” with Masque Theatre & Larry Hunt in a segment nominated for a cultural Emmy in 2010 and produced by Ed Wierzbiecki. She shares her knowledge of dance, puppetry and crossing artistic disciplines with audiences across the U.S. and abroad.  She has worked with children across CT to make more than 5,000 frog puppets since 2016 mainly through Hartford Performs. She also teaches with Z. Briggs and the Jim Henson Foundation in a contract with the VSA Kennedy Center program in order to train educators how to use puppetry in the classroom.  She has worked as a professional puppeteer now for nearly two decades, since she graduated from Chatham University with honors with a B.A. in Theatre and Cultural Studies in 2002.

Kendra Garnett is a CCSU BFA Theatre Performance graduate with a passion for acting and dance. She has appeared in many productions such as Sweeney Todd as The Beggar Woman, Mother Courage and Her Children as Mother Courage, Kimberly Akimbo as Debra and more. She also had the pleasure of performing in the one woman show, The Shape of a Girl as Braidie in The New York City Fringe Festival in 2018 and also at the Mattatuck Museum in Waterbury, CT. Kendra is excited to be jump starting her grad life with such fun and influential work like that of Sova Dance and Puppet Theatre and can’t wait to see what this further exploration of the art form does for her future in the theatre companies she works with.

Sound Artists Cynthia and Rick Quintanal of Crystal Cymbalogy create intentional sounds to lead attendees into a state of present awareness, using crystal sounding bowls, drums and voice. It is in this state of presence where we might receive more fully our complete experience of nature, our food and the gifts of our environment. Lifelong musicians, Cynthia and Rick bring their passion and expertise to the idea of inquiry into intentional sound. Rick has toured performing with The Don Ellis Orchestra, Kenny Rankin and Jorge Santana’s Malo. Part of the recording scene of LA and San Francisco, now plays with multiple New York Metro area groups in a range of genres. A lifelong singer and performer, Cynthia has performed in a range of settings from concert venue to the spiritual. She is currently with Crystal Cymbalogy and working in New York City theater. She has kept a vibrant healing practice in Connecticut for well over 20 years, combining Sound, energy work, Craniosacral and other forms of body work.