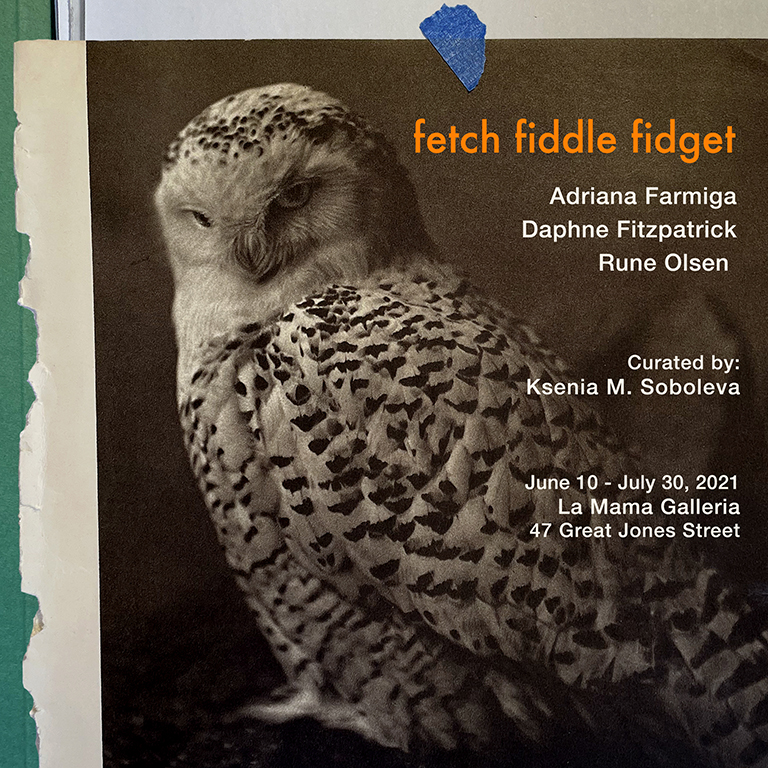 Playful and curious, fetch fiddle fidget brings together three New York-based queer artists whose work centers on found objects. Informed by different cultural backgrounds, this magic trio shares a fondness for the absurdities of the daily and the mundane, exploring how these speak to the larger structures of our world. The three alliterated verbs that make up this exhibition’s title capture a poetic element of chance that is inherent to the artists’ practice. Across various media, each of their respective bodies of work reveals the lasting importance of Surrealism as a vital reference point for queer artists working with objects trouvés today.

Adriana Farmiga is fascinated by what she refers to as “real abstract things.” Deliberately seeking out ambiguous-looking objects, many of which she encounters in her rigorous lap swimming practice, the artist has built an impressive collection of water-absorbent items, including Pull Buoys, floats, paddles, discs, and aqua bells. Driven by a compulsion to group things into pairs and clusters, Farmiga has been creating intricate small-sized paintings, in which these quotidian objects are staged against a colorful monochrome background. Somewhat reminiscent of Brassaï’s photography series, Involuntary Sculptures (1933), Farmiga’s natures mortes reconsider the meaningfulness of the painted still life in the 21st century. The artist’s process of translating three-dimensional objects onto the flat surface of a canvas requires a patience that nears the devotional, and creates a dialogue with artists such as Vija Celmins and Sylvia Plimack Mangold—though Farmiga’s work is markedly more abstract. Trained as a sculptor, the artist does not remain in the two-dimensional realm, and extends her exploration of material strangeness to installation pieces that combine seemingly incompatible things into new configurations. Coming full circle, several objects from Farmiga’s paintings reappear in the sculptures, highlighting a continuous act of translation between two and three dimensions that is at the core of her artistic process.

A self-described flâneur, Daphne Fitzpatrick’s practice is rooted in a Dada-esque attraction to nonsensical fragments of existence. Born and raised on Long Island, the artist harbors a deep love for New York, and has become attuned to its capricious rhythm. Picking up discarded objects during their walks around the city, Fitzpatrick assembles these fragments of found debris into simple sculptural compositions, allowing the materials to speak for themselves without much intervention: a golf club balances on top of a baseball bat, while a patinaed copper top hat—an allusion, perhaps, to the 19th century origins of flânerie—rests on the floor, and two trumpets protrude from the wall like rusty nails. The effortless and nonchalant appearance of Fitzpatrick’s work is bound to their artistic philosophy, which casts creation as a spontaneous act informed by the unconscious. The artist’s distinctive sense of humor, emphasized by the wordplay that they indulge in the titles of the assemblages, recalls the witty side of Marcel Duchamp’s work. Yet Fitzpatrick’s conceptual interest in the material traces of daily life is more complex than might appear on the surface, demonstrating a striking affinity with artists such as Yuji Agematsu and Candy Jernigan, who share in the resolute pursuit of what could be described as contemporary urban archeology.

Rune Olsen’s last name does not start with an F, but true connection cannot exist without exceptions. Having grown up in a conservative small town in Norway, Olsen’s investigation of the power structures embedded in image culture stems from his early experience of imposed belief systems. Using the internet as a source for found objects, the artist collects a wide range of images, including memes, selfies, nebulas, and food photographs, as a gauge of trends and patterns. Tackling platforms such as Tumblr and Hubble, Olsen approaches the virtual realm as a vessel for social excess, as attractive as it is repulsive, and dangerously addictive. Applying his findings to a sculptural practice that merges Surrealist and Pop sensibilities, Olsen’s pieces can take the shape of realistic hotdogs made out of Styrofoam, fabric slices of toast with traditional Norwegian garments sandwiched in between, or plaster chicken drumsticks adorned with marble nails. Following artists like Claes Oldenburg and Maurizio Cattelan, Olsen uses the art of illusion to play up our fetishized relationship with commodity consumption. Most recently, the artist has picked up textile as a material of interest, burning politically-charged phrases into large rugs. Here, a lyrical and flowery aesthetic both disguises and highlights the psychological manipulation of politicized language.

Through their distinct and dedicated engagement with found objects, Farmiga, Fitzpatrick, and Olsen ultimately yield paradox, whether highlighting seemingly useless objects that in fact have specific functional purposes, drawing out the poetic value of objects that are considered waste by others, or playing with the material incongruity of appetizing objects that would be harmful to consume. Sensuous, funny, bizarre, and incisively critical, fetch fiddle fidget flirts with the unconscious while at the same time urging us to remain alert to our surroundings. 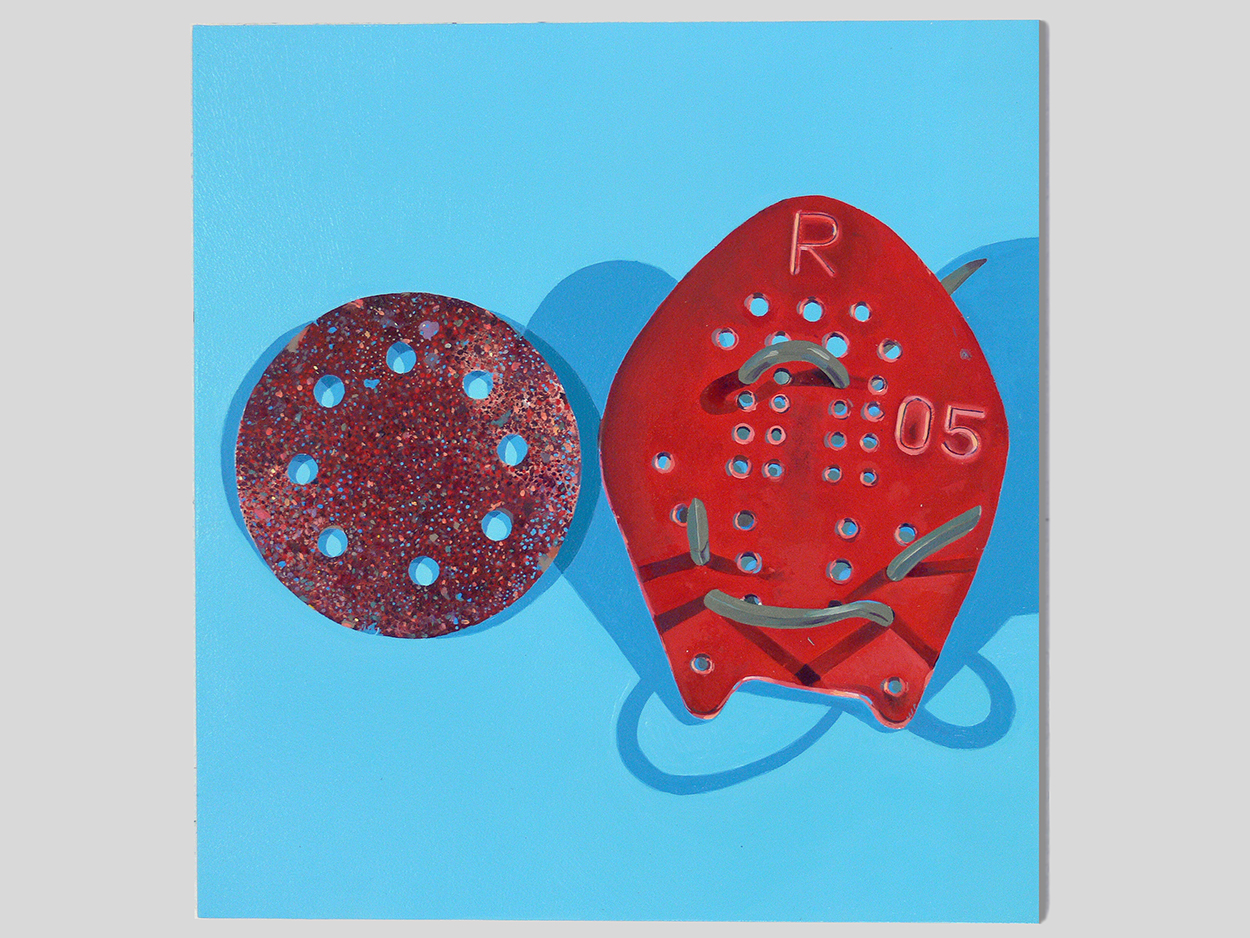 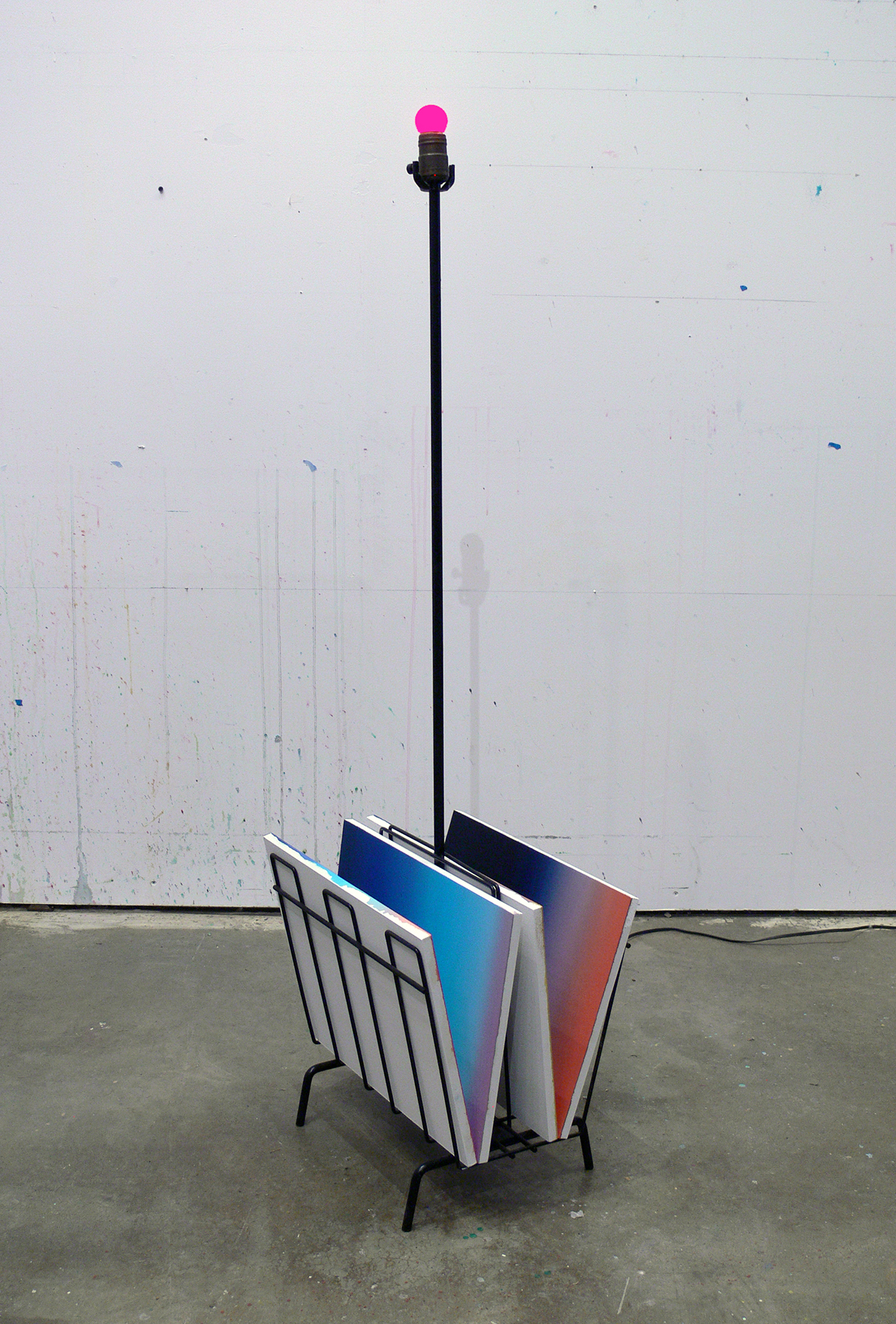 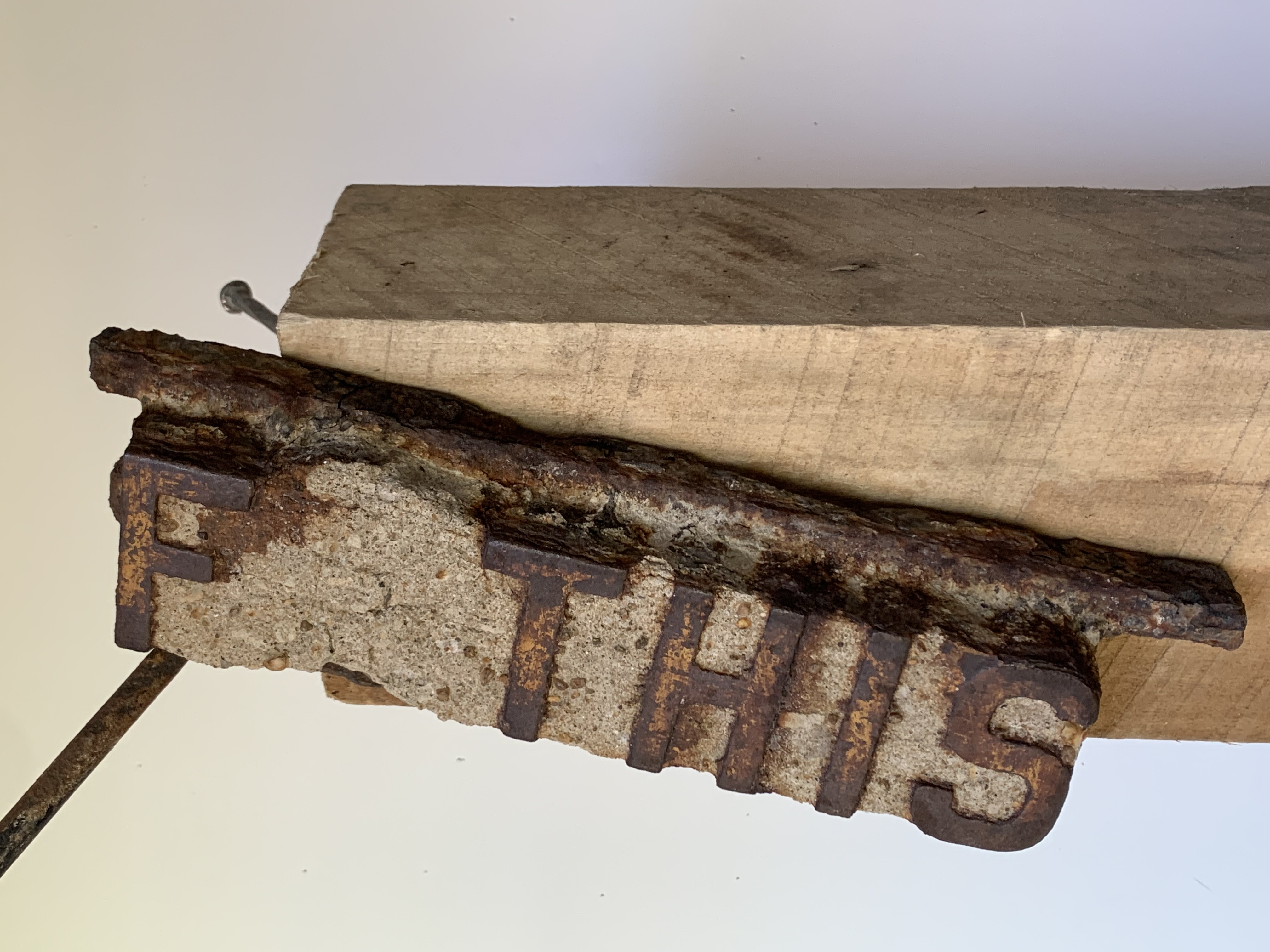 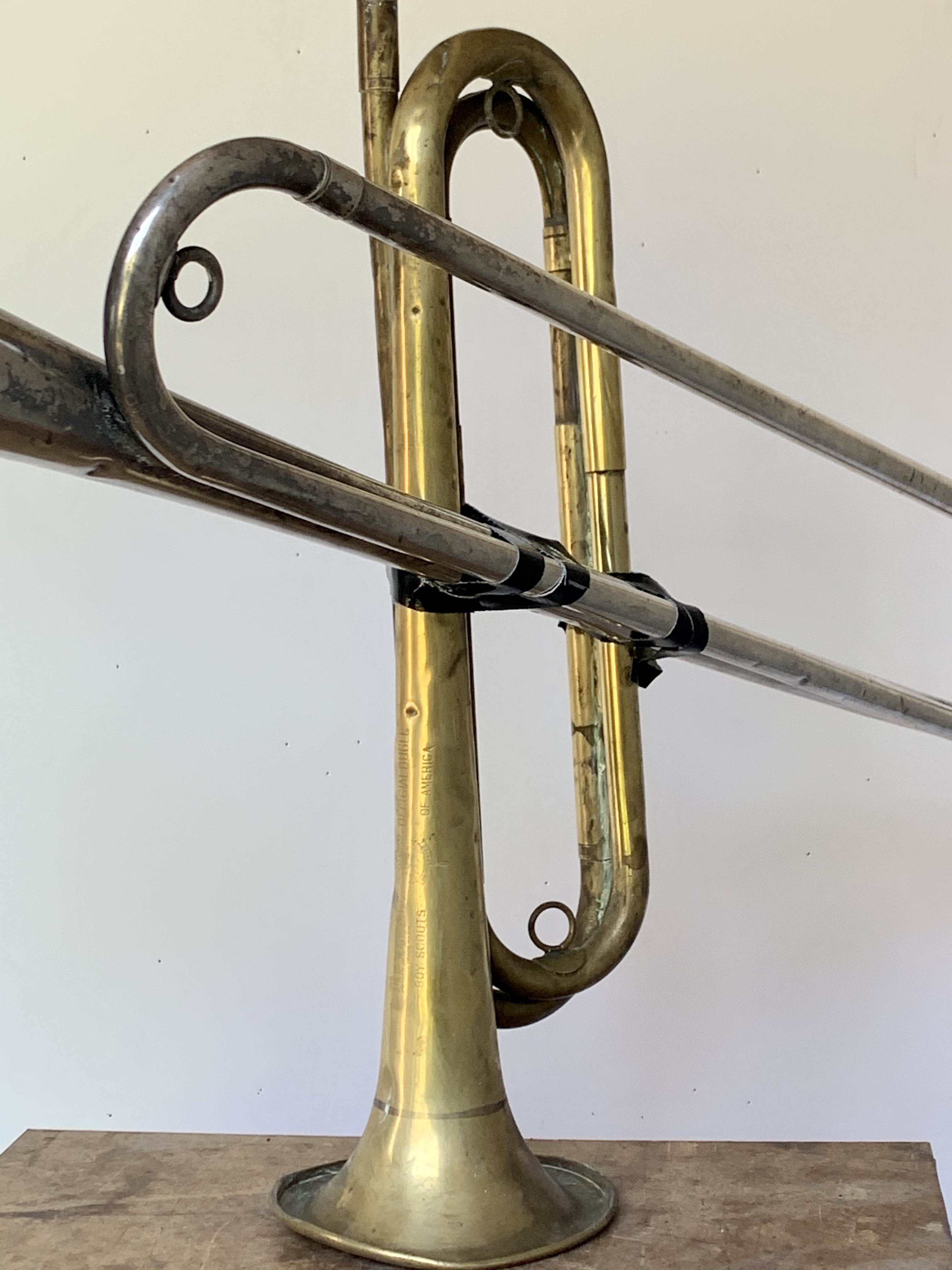 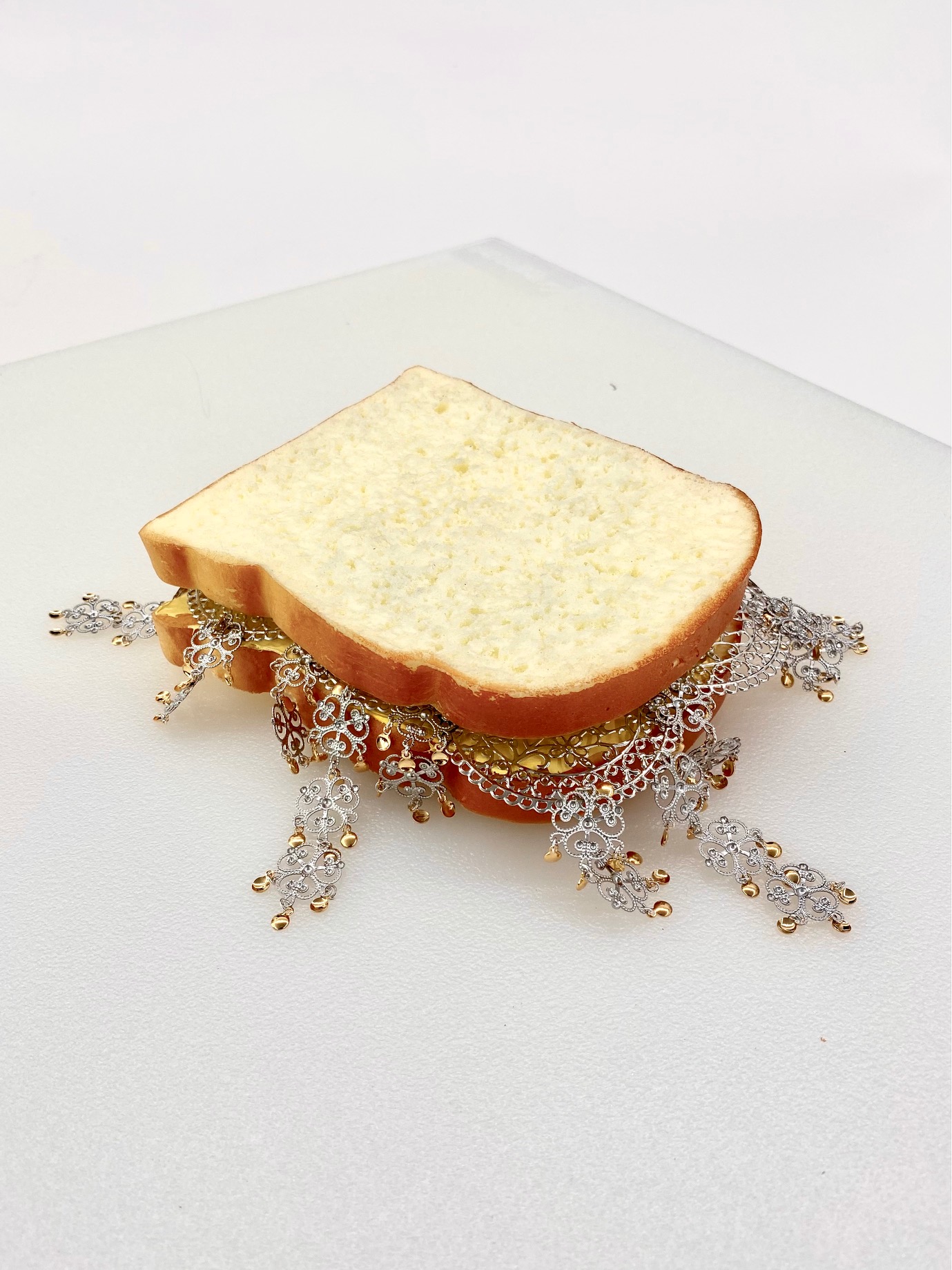 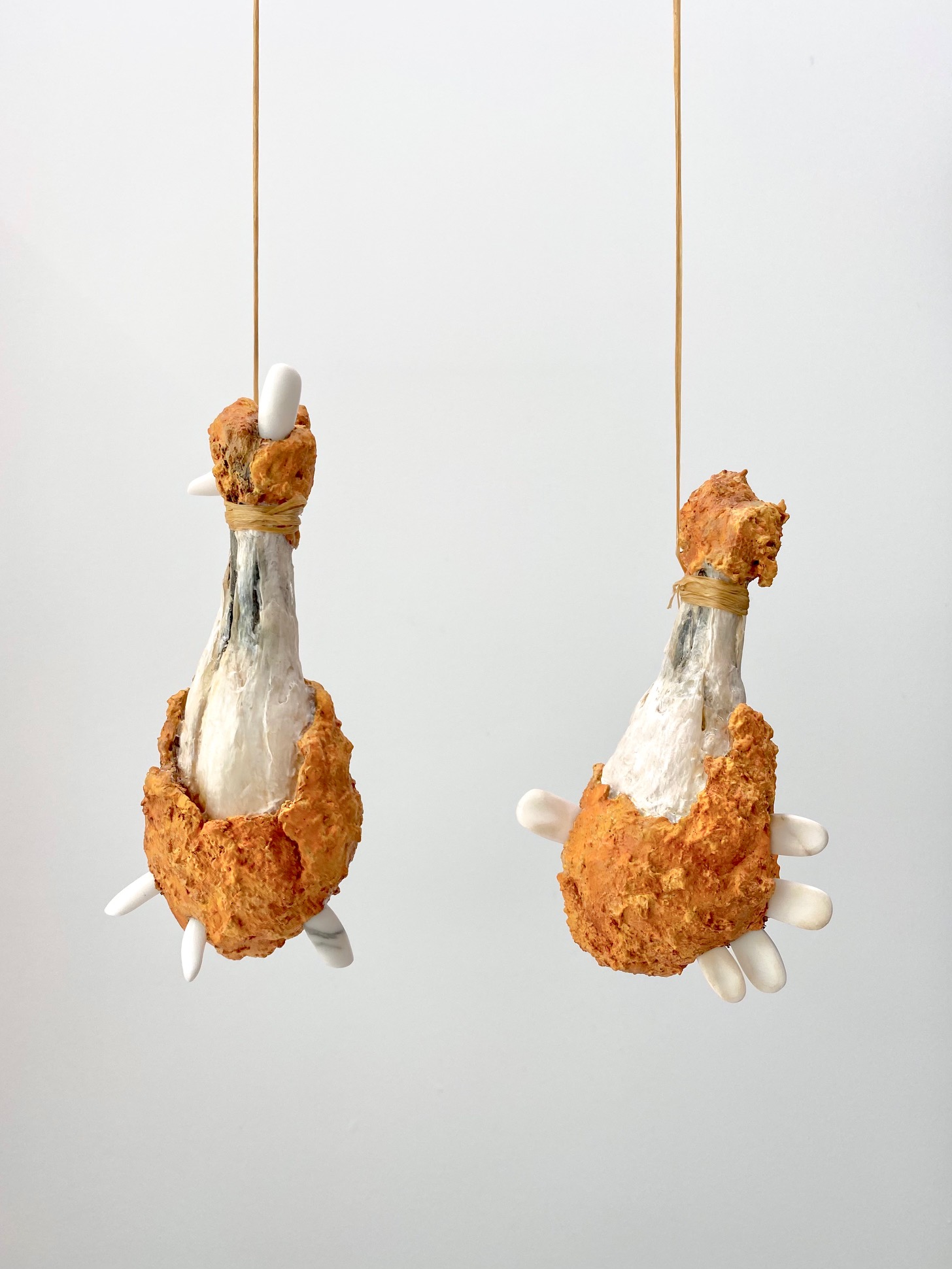 Adriana Farmiga (b. 1974) is an interdisciplinary artist and a first generation Ukrainian-American, by way of Argentina. She holds a B.F.A. from Cooper Union, and an M.F.A. from the Milton Avery School of the Arts at Bard College. Operating within a realm of dichotomous iconographies that mirror her own experience of cultural shifts, Farmiga’s work considers the ways in which identity is shaped through the uncanny and quotidian. Selected exhibitions in the U.S. and abroad include: Triple Candie, Tensta Konsthall, Socrates Sculpture Park, Dorsky Museum, and the Ukrainian Institute. Farmiga has held residencies at the Joan Mitchell Center, Mac Dowell, and Art Omi. She is currently a faculty member and Associate Dean at Cooper Union, and a vocal advocate for free education and community building.

Daphne Fitzpatrick (b. 1964) is an artist working primarily in photography and sculpture, whose practice is deeply rooted in flânerie. They have exhibited widely, including at ACP (Artist Curated Projects), Los Angeles, CA; Parker Gallery, Los Angeles, CA; Know More Games, NY;  Art in General, NY; Contemporary Arts Museum Houston, TX; Higher Pictures, NY; Bellwether, NY; and Gordon Robichaux, NY. Fitzpatrick’s work has received reviews in Artforum, The New Yorker, and The New York Times, and was featured in Vitamin 3-D: New Perspectives in Sculpture and Installation, published by Phaidon Press. In 2015, they completed a public commission for a monumental outdoor sculpture at Fisher’s Island, NY. Fitzpatrick was a faculty member at Yale Sculpture from 2001-2011, and currently teaches in the photography program at Bard College / Annandale-on-Hudson. Fitzpatrick's 2018 solo exhibition at Gordon Robichaux, NY was reviewed by Rahel Aima in the September issue of Artforum. They are represented by Gordon Robichaux, NY.

Rune Olsen (b. 1971) is a multidisciplinary Norwegian artist living in Germantown, New York. He holds a Postgraduate Diploma from Goldsmiths, University of London. Drawing inspiration from various sources of contemporary image culture, such as the internet, Olsen aims to challenge our dubious relationship to the natural world and the political ideologies embedded in representation. Since his first solo show in 1997 at UKS in Norway, his work has been exhibited widely throughout the USA and abroad, including The Bronx Museum, the Museum of Sex in New York, and the Istanbul Biennial. Olsen has received reviews in Art Forum, Sculpture Magazine, Art in America, and has been the focus of several magazine features, including Sculpture Magazine. He has held residencies at Artist Alliance, Art Omi, Headlands Center for the Arts, and Citè Internationale des Arts. In 2009, he was a Fellow in Sculpture at the New York Foundation for the Arts. Olsen has held numerous teaching positions, including as Assistant Professor in Visual Arts at Boston University.

Ksenia M. Soboleva (b. 1991) is a Russian-Tatar writer, art historian, and curator based in New York City. She is completing her PhD in art history at the Institute of Fine Arts, NYU, where her dissertation focuses on art and lesbian identity during the AIDS crisis in the United States. Soboleva has curated exhibitions at the 80WSE Project Space, Assembly Room, Honey’s, SPRING/BREAK Art Show, and Stellar Projects. She has taught at NYU and the Cooper Union, and presented her research at various institutions in the United States and abroad. Her writings have appeared in Hyperallergic, the Brooklyn Rail, art-agenda, QED: A Journal in LGBTQ Worldmaking, and she has contributed numerous exhibition essays. Soboleva is the 2020-2021 Marica and Jan Vilcek Curatorial Fellow at the Solomon R. Guggenheim Museum.