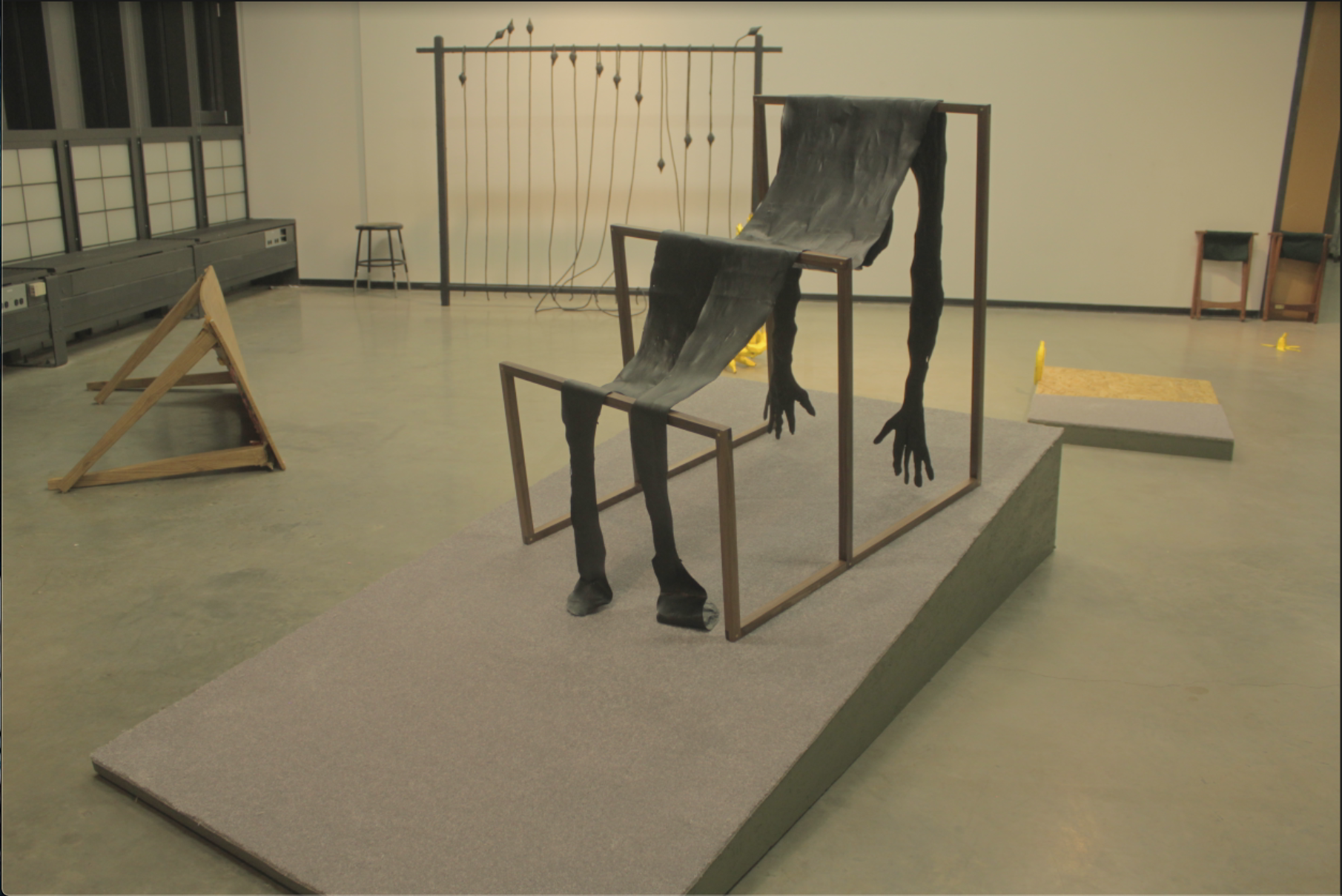 PERFORMANCE ANXIETY is a tribute to the realization that perverting the identity of an object can re-contextualize the life of the object entirely.

TOMMY COLEMAN is an interdisciplinary artist based in New Haven, Connecticut. Coleman’s work investigates the activation of objects to engage in a larger narrative of maker as performer, while still focusing on the ability for sculptures to have an identity autonomous of himself as a maker. Originally from Florida, a graduate of Cooper Union in 2009, Coleman is currently pursuing his MFA as a 2016 Yale Sculpture candidate.

The stage is set, and the pieces are in place, now all that is left is to watch and wait. Tommy Coleman’s study on reality entitled PERFORMANCE ANXIETY relies on tools and devices more common to the stage than the gallery. Coleman’s sculptures explore the degradation and disintegration of objecthood–the transitional phase when an object is recognizable but is no longer suitable for its intended utilitarian purpose.

These recognizable set pieces are all asked to perform their roles but Coleman, as creator, has given none of these objects the required attributes or structure to succeed in their functional task. Coleman relies on unexpected material choices to pervert the role that each object is evocative of- a table laden with gum is splayed in exhaustion, unable to fulfill its original purpose, bananas have gathered together as a viable construction material and thus both objects re-write their role in this installation.

In Coleman’s constructions, the audience recognizes the objects but is unable to reconcile the disconnect between expected purpose and their abstraction, which lends each sculpture the suggestion of an independent life existing beyond the creator or viewer. The narrative of the object exists in the discord between expectation and performance.

La MaMa La Galleria will host a public discussion between Tommy Coleman and Devin Kenny concerning both artists interests in the intersection between object making and performance within their artistic practice.

Devin Kenny is an interdisciplinary artist, writer, musician, and independent curator. Hailing from the south side of Chicago, he relocated to New York to begin his studies at Cooper Union. He has since continued his practice through the Bruce High Quality Foundation University, Skowhegan artist residency, SOMA, and collaborations with DADDY, pooool, Studio Workout, Comotroovay-sa, Wild Isle, Adult Contemporary and various art and music venues in New York City, Chicago, Los Angeles, and elsewhere including: Recess, Het Roode Bioscoop, St. Cecilia’s Convent, Freak City, and Santos Party House. He received his MFA in 2013 from the New Genres department at UCLA and is a recent alum of the Whitney ISP.