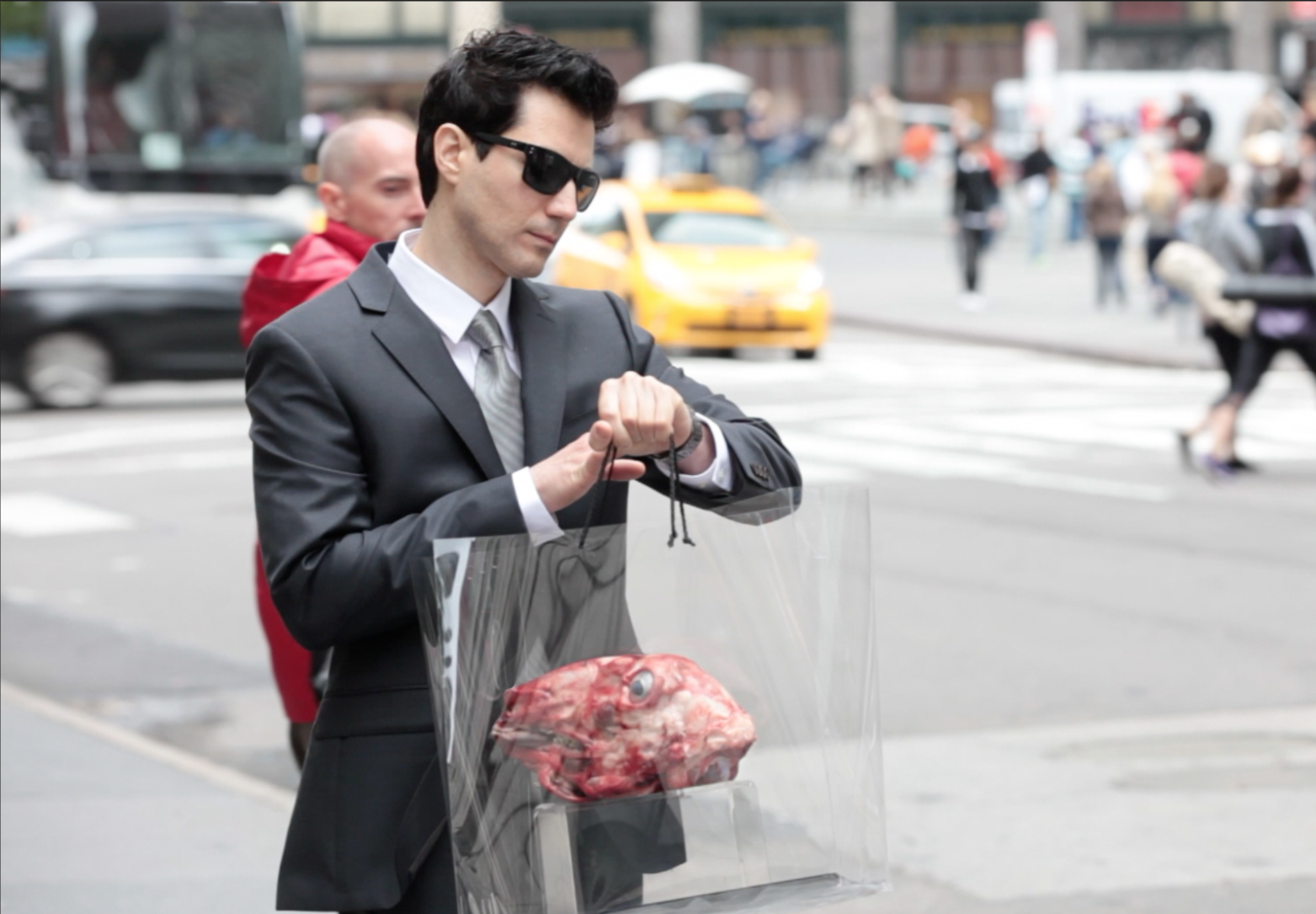 La MaMa Galleria in partnership with RARE Gallery is pleased to present N​obles & Savages, ​a group exhibition featuring works by three artists represented by RARE: Johnston Foster, Dionisios Fragias, and Eamon O’Kane. Their works, to be exhibited at La Galleria’s new space at 47 Great Jones Street in New York City, reference the noble side of man as well as a darker side that often obscures and interferes with his better instincts.

Foster’s morphed, distorted creatures, made from discarded materials the artist collects from the streets, serve as a warning of what can become of us if we lose all respect for our environment. Fragias’ video Bad Shepherd transforms the symbol of the Arcadian shepherd of classical antiquity into a well-dressed, time-conscious contemporary business executive. Strolling along Manhattan’s 5th Avenue with a lamb’s head in a clear shopping bag, he is an overt critique of society’s propensity for over-consumption, self-absorption, and greed. The architectural and design-based drawings of O’Kane remind us of the utopia that Modernism once promised but never delivered. O’Kane’s affection for this missed opportunity is evident, even though man was the root cause of Modernism’s failure to elicit social change.

RARE​ was founded in 1998 to help shape​, nurture, and promote the careers of emerging visual artists who have not yet widely exhibited. After 13 years, its mission remains constant. While many of its artists have benefited from extensive international exposure and have been included in prestigious museum shows and collections, the gallery continues to make room in its schedule every season for artists new to the marketplace. RARE was the first contemporary art gallery to open in the heart of Manhattan’s historic meatpacking district, where it remained for five years before relocating to Chelsea in 2003. It has occupied its present space at 547 West 27th Street since 2009.

Johnston Foster​ b​rings a long ­lost sense of hand­-crafted-­ness to his sculptures, which are created out of discarded, cast-­off materials he finds strewn across highway medians, tossed into dumpsters, and abandoned in alleys. They are metaphors for survival, ironically demonstrating how the essential materials of nature can be transformed to support human existence, but then are often recklessly consigned to the waste bin. In resurrecting these materials and transforming them into exaggerated and distorted creatures, Foster cautions us that disrespect for our environment can lead to some very unusual and unexpected consequences.

The enormous admiration and respect accorded Foster’s work is evidenced not only by the many exhibitions he has had at museums, universities, alternative arts venues, and galleries, but also by the excellent collections his works have entered over the last decade. His sculpture has been collected by The Muscarelle Museum at the College of William & Mary, Williamsburg, VA; 21c Museum, Louisville, Kentucky; the Chaney Family Collection, Houston, Texas; Jean Pigozzi, Geneva, Switzerland; the Rubell Family Collections, Miami, Florida; Jim Martin, Washington, DC; Howard Tullman, Chicago & New York; and Glenn Close & David Shaw, New York & Maine.

In 2014, Foster exhibited in a two­-person show at The Blender Gallery in Athens, Greece, where he was taped for a television documentary by Red Bull Media House, part of a 10­-episode series to air this April. In May 2015, he will celebrate more than a decade with RARE with his sixth solo show at the gallery, and in the fall he and fellow RARE artist Jimmy Joe Roche will exhibit together at Gallery 5 Arts in Richmond, VA.

Dionisios Fragias’ work combines cultural, social, and political iconography from various phases of human history (e.g., Biblical, Ancient Greek, Modern, Pop, Contemporary) to comment upon human nature’s cyclical and competing tendencies toward creation and destruction, focusing on how today’s push toward technological advancement, while full of promise and hope, can be fraught with peril. His multi­-media works, particularly the “hybrid paintings,” which are oil paintings on top of cut­-metal wall reliefs, often juxtapose elements from vastly separated time periods to indicate how throughout history various symbols by which societies measure and represent their respective ideals reveal the conflicting duality in mankind’s nature. Fragias exhibited with fellow artist Johnston Foster at The Blender Gallery in Athens, Greece, this past summer, and his work is in several major collections, including the world­-renowned collections of Dakis Joannou (Athens) and Ephi Gildor (Denver). His fourth solo show at RARE opens on April 23, 2015.

Eamon O’Kane grew up in a historically significant home, Cavanacor, in County Donegal (Ireland), which is the ancestral home of the 11th US President James K. Polk and was a haven in 1689 for the last Catholic monarch of England, James II, during the Siege of Derry. This circumstance is largely responsible for his love of architecture and his subsequent utilization of Modernist architecture, design, and art as an inspirational jumping off point to highlight and investigate man’s noble attempts to develop a harmonious relationship with his environment. In his paintings, drawings, prints, videos, sculptures, and installations, Modernism becomes the thread by which O’Kane explores the double­-edged sword of human achievement – the effort to attain utopia and the inevitability of the failure to reach that exalted state of existence.

O’Kane has over 50 solo shows and numerous group shows worldwide to his credit. In the United States, he exhibited in The Atrium at 101 California in San Francisco in 2010, where he created a large­-scale representation of Philip Johnson’s Glass House along with a series of paintings that referenced other works by the architect. At the Sheldon Museum in Lincoln, NE, he helped kick-­off the Philip Johnson-­designed museum’s 50​th anniversary in 2013 with another three-­dimensional interpretation of The Glass House, which was exhibited to spectacular effect in The Great Hall. O’Kane has had three solo shows at RARE (NY) and two at Gregory Lind Gallery (San Francisco). His fourth one-­person exhibition at RARE will take place during the 2016­-17 season.

This project is made possible in part with public funds from the Manhattan Community Arts Fund, supported by the New York City Department of Cultural Affairs and administered by Lower Manhattan Cultural Council.