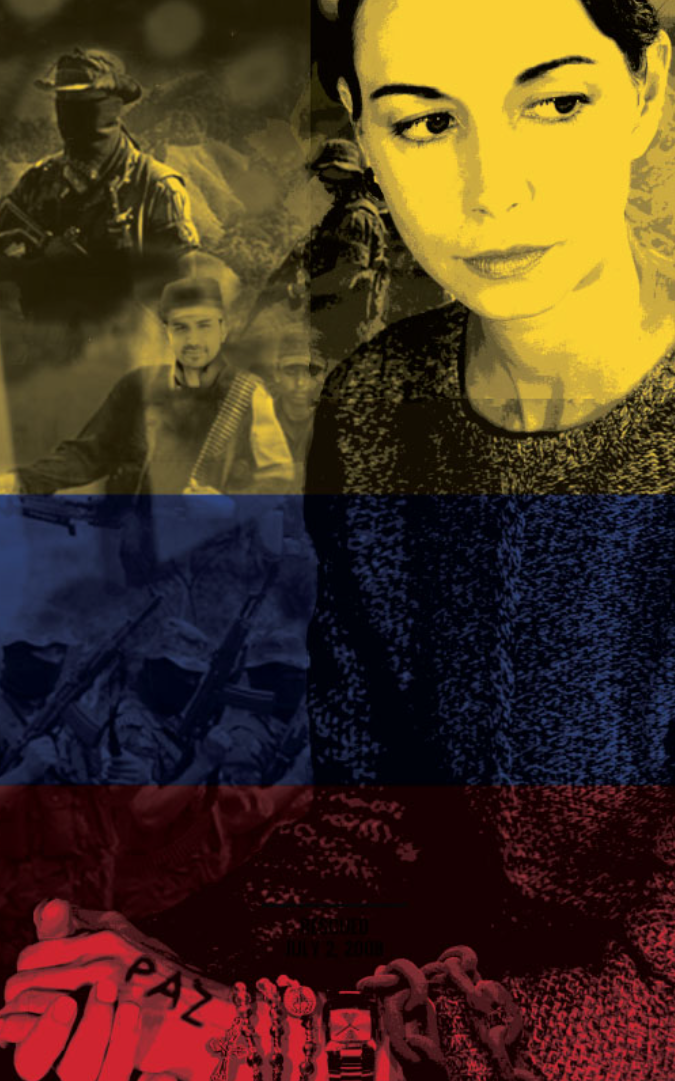 Thursday to Saturday at 7:30PM; Sunday at 2PM

While Ingrid Betancourt, a former senator and anti-corruption activist, was running for President of Colombia in 2002, she was kidnapped by the Marxist revolutionary terrorist organization the FARC. This story is a theatrical re-imagining of those events. The Woman narrates this story, through “intrusive memory,” a symptom of PTSD. She grapples with an ever-present series of moments in her life, as the play shifts in time and place via fragmentary scenes in a variety of locations.

There will be a series of conversations after select shows, surrounding themes in Kidnap Road. The play runs approximately 70 minutes with no intermission, and these happen directly afterwards, lasting no more than a half hour including the Q & A:

In conversation with Patricia Davis about the book she co-authored with Dianna Ortiz, “The Blindfold’s Eyes” regarding the abduction of Sister Dianna Ortiz in Guatemala.

Patricia Davis was a 2015-2016 fellow in Arena Stage’s Playwrights’ Arena. Her most recent play, Digna, is based on the life of Mexican human rights activist Digna Ochoa.  Davis is the former director of the Guatemala Human Rights Commission.

Monica Trausch is a Brooklyn-based writer originally from Los Angeles.  Her play “The ABCs” will premiere at The Complex Theater in Hollywood this summer.

Martha Wade Steketee works with playwrights, reviews scripts, and serves on boards including American Theatre Critics Association and Literary Managers and Dramaturgs of the Americas.

Order and Disorder in Latin America: a conversation with Alexander Santiago-Jirau.

Alexander Santiago-Jirau is Director of Education at New York Theatre (NYTW).  A Theatre of the Oppressed (TO) practitioner who studied and worked with Augusto Boal, Alex has facilitated numerous workshops throughout his career.  He is on the faculty for the Program in Educational Theatre at NYU’s Steinhardt School.

Artists of Kidnap Road in conversation with Caridad Svich.

Caridad Svich received 2012 OBIE for Lifetime Achievement, and the 2011 American Theatre Critics Association Primus Prize. Her plays, in English and Spanish, have been seen across the US and abroad. As a translator she is best know for her translations of Federico Garcia Lorca’s plays.

Jeanine Tesori is an American composer and musical arranger. She is the most prolific and honored female theatrical composer in history, with five Broadway musicals and five Tony Award nominations.

In conversation with Shilpa Darivemula and Rohini Bhatia the medical students who created The Aseemkala Initiative: The use of dance to tell stories of illness and healing is ancient and powerful. We aim to preserve diversity and promote authentic engagement among indigenous communities through the shared experience of sickness and healing.

In conversation with Toni Shapiro-Phim and Amy Lee Sanford about artistic explorations of the legacies of violence and displacement, especially in Cambodia.

Toni Shapiro-Phim’s research and writing examines the relationship of the arts to violence, migration, conflict resolution and gender concerns. PhD in anthropology from Cornell, focusing on dance and war in Cambodia. Director of Programs at the Philadelphia Folklore Project.

Amy Lee Sanford, born in Cambodia and raised in the United States, is a performance and installation artist.

Catherine Filloux is a theater artist who has been writing about human rights and social justice for over twenty years. She was honored with the 2015 Planet Activist Award for to her long career as an activist artist in the theater community.