Jump Start | A Presentation of Works in Progress 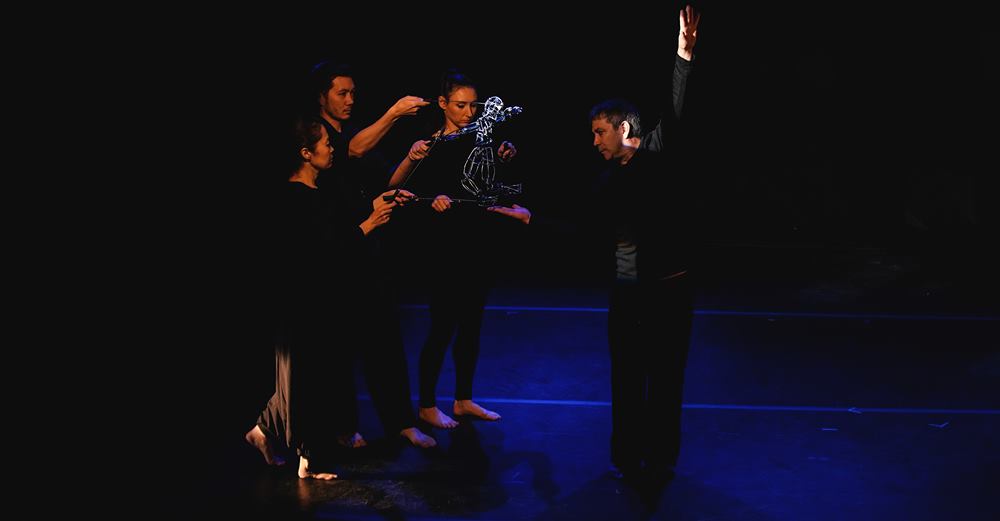 A Presentation of Works in Progress

Friday to Saturday at 8PM; Sunday at 5PM

Puppet and theatre artists get a chance to showcase their works in progress in the La MaMa Puppet Series. Four artists will share a three-day billing including: The Final Lesson (working title) by Loco7 Dance Puppet Theatre Company, Place No Place by Tom Lee and Lisa Gonzalez, Daydream Tutorial by Maiko Kikuchi, a new work by Torry Bend, and PACKRAT by Concrete Temple Theatre.

Loco7 Dance Puppet Theatre Company has begun development of The Final Lesson (working title) a dance puppet theatre piece, inspired by Restrepo’s true-life experience with his Aunt Sonia, a woman who decided to end her life with dignity after a long illness at the age of 72.  The show will use puppets, live actors, music, video and physical theatre to deal with the themes of life, love and loss. Conversations about assisted dying bring up controversial and emotionally fraught issues: morality, religion, politics, and faith. With this piece Loco7 hopes to acknowledge the incredible intimacy and the very personal nature of dying as the final event of living a self-actualized, individual human life and to move the dialogue from the philosophical arena to the realm of personal experience and stories related to the topic of Death with Dignity.

Under the direction and vision of Federico Restrepo, Loco7 has been in existence since 1985. Loco7’s mission has been to develop the use of puppetry as an instrument for the dancer, a style which incorporates dance and design. Utilizing rhythmic music, dancers, body puppets and larger then life marionettes, Restrepo weaves a choreography which extends beyond the body of the dancer. Dealing with themes such as South American Culture & History, the immigrants’ experience and urban life, Restrepo creates an animated movement, in an ever-changing and surreal environment, bringing the stage to life. Website: www.loco7.org

Place (No) Place is a dance puppetry performance about our memories of the places we come from and how they haunt and inspire our journeys through this world.  Told though sensuous movement and vivid puppetry by dancer Lisa Gonzales and puppet artist Tom Lee, the piece invites the audience to consider their own memories and experience of home.

At the heart of the design of the show is a miniature house, a “memory palace” filled with images and sounds, that is explored with a small camera throughout the evening.  This blend of dance and cinema, puppetry and found objects, asks questions about the enduring power of place.

How do you shape your face?
How do you pretend you are not home when your persistent neighbor knocks at the door?
Do you know how to make your clones?
First, try your way. If it doesn’t work, here is my way.

Maiko Kikuchi(b.1983, Tokyo, Japan) received her B.A in Theater Arts and Fashion Design from Musashino Art University, Japan in 2008, her M.F.A in Sculpture from Pratt Institute, in 2012. Extensive multi-faceted professional experience in the areas of Illustration, painting, drawing, collages,sculpture,animation and puppetry/performance. Her recent object theatre piece ”No Need For A Night Light On A Light Night Like Tonight” has shown at La MaMa as a part of 54th Puppet Series.

Also she was in performance show “Discrepancies” (As puppeteer) at St.Ann’s Warehouse, in group exhibition “NO PARKING” at Ca’d’ Oro Gallery, NY. Her drawing/collage works are commissioned to some online art galleries such as Tuuum, The Art Mint and Walls Tokyo. She also performed at Whitney Museum as a performer in live performance show, “The Chair” directed by Theodora Skipitares.

A new work by Torry Bend

Inspired by Watership Down, Packrat is an epic tale of charismatic anthropomorphized animals on a journey full of intrigue, adventure and lust for power, as they battle for a sense of place in their world. It is a puppet play incorporating the visual arts, multimedia, dance and original music.

Concrete Temple Theatre is a multi-disciplinary company committed to the creation of compelling new theatrical works, incorporating drama, dance, puppetry, music and the visual arts. Since 2004, our company has created devised visual theatre that challenges the traditional relationship between design and text. Through touring original works and presenting workshops in NYC, nationally and internationally, we strive to bring myth and ritual back to the center of dialogue, by presenting works and workshops that address real issues within communities (grief, family relationships, environmental stewardship). http://concretetempletheatre.com/new/works/in-process/