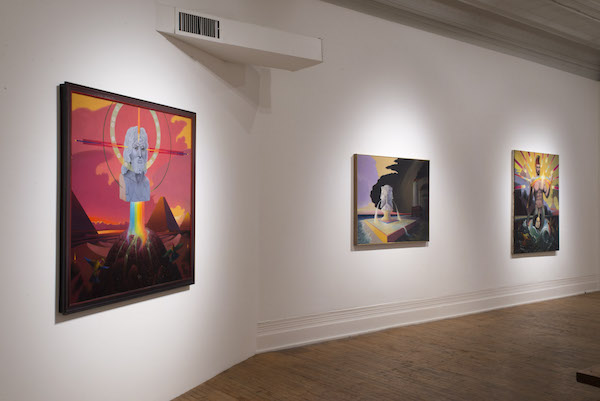 La MaMa Galleria is pleased to present Ingo Swann: A Remote View, a one-man exhibition of paintings and collages by Ingo Swann. An acclaimed psi-researcher and author, Swann participated in over a hundred academic and government-backed research studies, which investigated human psychic powers as a reality – one that modern science systematically trivialized as unfounded or abnormal.

Swann pioneered the skill of “remote viewing,” a psychic ability that allowed one to see physically distant locations, such as the surface of planets. When the CIA discovered the existence of Soviet psi-spies at the height of the Cold War, they turned to Swann and the Stanford Research Institute (SRI) to train a group of military personnel in remote viewing, with the goal of creating their own psychic spies. This project, code named Stargate, ran from 1978 to 1995. During this period, Swann was told that his findings would never be shared with the public, out of the fear that civilians might begin to harness their psychic abilities to dismantle the status-quo. Swann’s sense of repression was further compounded by the fact that he was a gay man living within a homophobic culture. Art, however, allowed Swann to freely express both his psychic inclinations and his sexual desires. A Remote View, as a title, references Swann’s psychic ability as well as his status as an outsider, remote from the cultural norms of his homophobic and psi-phobic society.

The paintings and collages included in the exhibition – spanning the early 1960s to the late 1990s – illustrate the unique way that Swann viewed the world. After abandoning his dream of commercial success in the late 1950s, Swann continued to paint only what gave him joy: primarily, the energy that he saw radiating from the people around him. Swann saw this energy – chi, aura, force – as uniting all living things to one another. He believed that if people were to harness their extra-sensory perceptions, to see these forces as he could, the world would change for the better. For this reason, this exhibition focuses on works from throughout his life that depict energy radiating from figures in rays, flames, mandalas, and halos. His subjects range from the mythological and ancient to hippies and hustlers. The latter of which, he may have seen outside of his home and studio on the Bowery in Manhattan.

Ingo Swann: A Remote View is a rare opportunity to see Swann’s artworks, many of which have never been exhibited, blocks away from his home and studio. In these works, we experience the pleasure of watching the transformation of the East Village and its inhabitants through a visionary’s eyes. When compelled by society to repress his power and desires, Swann refused, choosing instead to use his art as a way to freely express himself, and in so doing, to compel others to find their authentic selves by reconnecting with the energy that courses through us all.

Ingo Swann was born in Telluride, Colorado in 1933. Since 1970, Swann has been interviewed or profiled in dozens of magazines, including Time, Reader’s Digest, Smithsonian and Newsweek. He has published more than ten books on various psychic subjects such as remote viewing aliens on the Moon and Earth, how individuals can develop their future-seeing abilities, and the intersection of sexuality and psychic energies. His artwork is in the collections of The National Air and Space Museum, Edgar Cayce’s Association for Research and Enlightenment (A.R.E.), The American Visionary Art Museum and the Leslie Lohman Museum of Gay and Lesbian Art. His works have been included in “CLEAR,” an exhibition at Gagosian, Los Angeles in 2014, “The Rainbow Serpent” at Gagosian, Athens last year, and are currently in “Cock, Paper, Scissors” at ONE Archives at USC Libraries, Los Angeles. Swann passed away in New York City in 2013. He is survived by his sister and several nieces, nephews and grand nieces and nephews.

Swann on his artistic practice (Video)

Swann’s niece on her uncle (PDF)