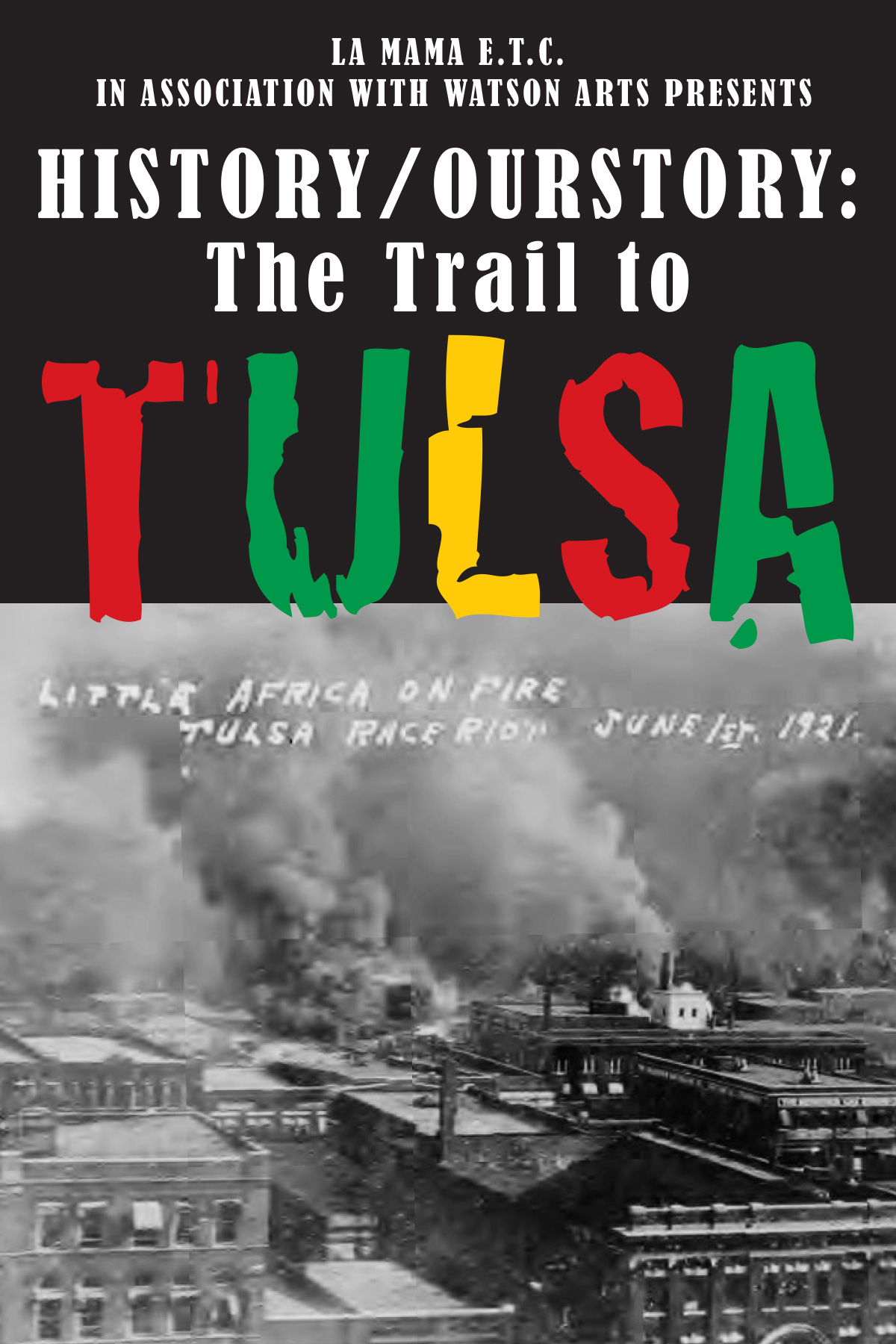 In this year marking the 100th anniversary of the 1921 Tulsa Race Massacre, HISTORY/OUR STORY: The Trail to Tulsa revisits the violent destruction of the all-Black Greenwood section of the Oklahoma city and its thriving business district known as “The Black Wall Street.” The complicated and little-known history at the heart of HISTORY/OUR STORY: The Trail to Tulsa is, for better or worse, a truly American story.

Created and directed by James E. Reynolds, The Trail to Tulsa is the second installment of HISTORY/OURSTORY, a town hall-style presentation series that weaves primary-source documents and historical texts with responses to those materials by artists using a variety of media.

Your show was absolutely amazing, powerful, informative, fascinating, also sort of upsetting, yet deeply inspiring—both. Can it be showed again? It should be seen by everyone. — Christy P.

I really appreciated the significance of the selected moments in history, and the art of reaction. I definitely cried for Strange Fruit, as I’m sure everyone in the theater had as well. I can’t wait for your collection to continue on and reach a larger audience. I think everyone in this country needs to hear these words. — Kristin R.

Congratulations again on creating this new work and for providing new insight into our country’s fractured history. Staggering when you hear about it in its totality. — David B.

James E. Reynolds is awriter and director whose work has appeared in national and New York Citypublications, including Sports Illustrated, MONEY, and the New York Observer. He was the lead researcher onthe HBO Sports’s Peabody Award-winning documentary series, Journey of the African American Athlete, which explored the intersection of athletic accomplishment and social change. In 2019 La MaMa presented Reynolds’s HISTORY/OURSTORY as part of the theater’s 1619 commemoration.

Truth Bachman (they/them/theirs) is a composer, vocalist, and writer of socially-focused musicals. Described by the NYTimes as “musically and vocally rich”, they are praised for “golden-voiced”, “soulful vocals” (Vulture). Truth was recently featured in Teen Vogue. Bachman’s acclaimed Shapeshifters about LGBTQ+ superheroes, was developed at an ongoing residency at Joe’s Pub, The Delacorte Theatre, Musical Theatre Factory, UArts, and was the inaugural recipient of the Denovan Grant. The soundtrack will be released in 2022. FARMED: A Live Podcast Album, Bachman’s musical podcast concert, features interviews with grassroots leaders and a vocally percussive score for 25 voices. It was published in 2020. Truth has written and composed 10 full length musicals, and musically directed, supervised, or performed in nearly 100 off Broadway musicals and plays. Their short “Who Holds Us” recently debuted at NewFest. Truth is an artist in residence at La Mama ETC and a visiting artist at Princeton University with director Will Davis for the ‘21-22 season. Truth is an alum of New Dramatists Composer-Librettist Studio, Joe’s Pub Working Group, NYU Tisch, and received a 2021 Jerome Hill Fellowship award as a finalist in music. Truth’s latest work, Luna and The Starbodies, plays Joe’s Pub in May.

LeLand Gantt, last seen here as Pontius Pilot in The Last Days of Judas Iscariat, is thrilled to once again be on stage at LaMaMa. LeLand’s credits span television and film, as well as regional, Off-Broadway and Broadway stages. His autobiographical one man show, RHAPSODY IN BLACK, resumes touring in February of 2022.

Charley Hayward, an original member of the Great Jones Repertory Company, has performed nationally and internationally with numerous theater, modern dance, and marionette companies. He has been on Broadway, Off-Broadway, Lincoln Center's Beaumont Theater, the Public Theater, the Spoleto Festival (Italy), in Parisian Cabaret (Le Lido), and has many film, television, commercial, and voice-over projects to his credit. Throughout, Hayward has photographed extensively, apprenticing for the past fifteen years with traditional silver-gelatin master-printer James Megargee here in New York, and has exhibited his prints both at the International Center of Photography and the Maine Media Workshop.

Valois Marie Mickens, a fine artist, has found acting more challenging and meaningful. Her great challenges started with Andrei Serban's "Fragments of a Trilogy" in the '70s to Ping Chong's "Chinoiserie," to Jeton Neziraj's "Balkan Bordello", coming to the U.S. in April, just to name a few. It has been quite a journey and I am loving it.

Henu Josephine Tarrant (Rappahannock/Ho-Chunk/Kuna) is a lifetime Native NYC community member. A third generation New Yorker and second generation Jerseyite. All of which has had a huge influence on her very urban experience as a Native woman in the performing arts. She is a graduate of the American Musical & Dramatic Academy’s prestigious Musical Theater Program. She has attended the National Institute for Directing & Ensemble Creation, and the LABrynth Theater Intensive Ensemble. Her most recent works include 100 Years 100 Women: Restart Stages (Lincoln Center), Native Theatre: Where Are We Now? (Howlround.com), Misdemeanor Dreams (Abrons Arts, NY), Red Moon Blues (New York Theater Workshop NXT Door, NY), DOGFIGHT (Second Stage Theater, NY), Ajijaak On Turtle Island (The New Victory Theater, NY) , & Don't Feed The Indians-A Divine Comedy Pageant (La MaMaE.T.C, NY) with Safe Harbors NYC. She also was a featured vocalist on the soundtrack of Dawnland (composed by Jennifer Kriesberg). She is currently focused on serving as the interim Managing Director of Safe Harbors NYC, continuing to workshop her one-person show Red Moon Blues, and finishing her first EP SERPENT in 2022.

Isabel Leight is thrilled to be returning to La MaMa, where she was last seen as “Astyanax” in the 2019 remounting of The Trojan Women directed by Andre Serban and composed by Elizabeth Swados. She has appeared in “Blue Bloods”, “Law and Order SVU”, and starred in the short film “I’ll Hide, You Seek”. She is a singer/songwriter and is a huge Swiftie and Selenator! Special thanks to Warren, Karen, Imogen, Judy, Josh, Francesca, Sydney, Lindsey and Lulu for supporting her. An extra special thanks to Jimmy Reynolds for including her in this incredible project.

Maya Sharpe is a multi-passionate maker and thinker. Musician. Storyteller. Filmmaker. Creative Consultant. Maya's passion lies in exploring simplicity in humanity through composition. Using this tool to demonstrate there is more of a connection and love between everything than the politically derived disconnect and hatred.

Watson Arts is a resident company of La MaMa that was started by Mary Fulham in 1994, and dedicated to original work for the theater with a particular emphasis on women. While it continues to elevate the voices of women, Watson Arts has expanded its mission to include the work of culturally-diverse story-tellers and artists. We are excited to launch this new initiative with HISTORY/OURSTORY: The Trail to Tulsa.