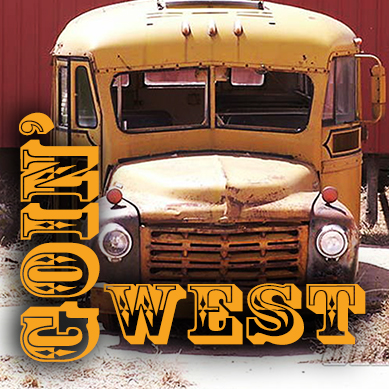 Set in a rundown off-campus college apartment, shared by two roommates, that turns into a campsite straight out of a classic Hollywood western, complete with its own Walter Brennan like camp cook, “Goin’ West” is a 21st century cross-country adventure of the imagination reminiscent of the original western migration and settlement of America.

At the heart of the action is an abandoned school bus and one characters’ spontaneous drive to go get it for the purpose of starting a traveling theater troupe that the two roommates have been dreaming about. “Gold, it’s just like gold. Yellow and buried. That could be our new home.” Both real and imaginary, the school bus haunts the other roommate, who once lived in it, and who wants nothing to do with the recovery adventure and it’s connection to the past. “Yeah well, it might be yellow and buried but it ain’t going to be shining, I can tell you that.”

The struggle that ensues between the two roommates as to whether they should be studying or quitting college and “Goin West” is both profound and wildly comic as the mythical camp cook emerges from the celluloid past to keep the peace between the two headstrong leaders. Unearthed along the trail, as the roommates fight to determine whether to stay or go, are the thorny issues of student debt and the value of education, literature versus storytelling, the catastrophic clash between Native American and Anglo culture, the power of dreams and the question of what the ideal of “America” really means. In the words of Langston Hughes: “Oh let America be again. The land that has never been and yet must be.”