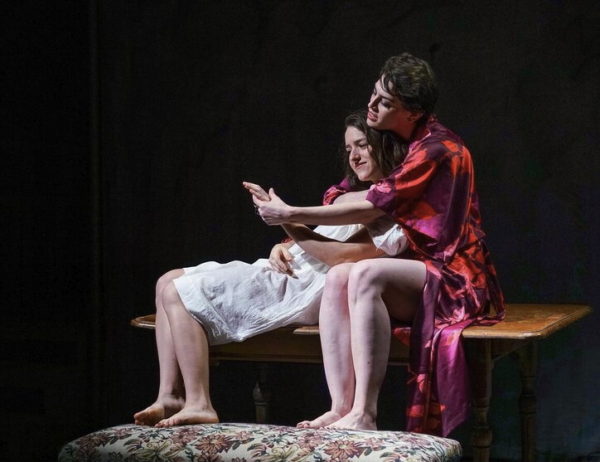 Wednesday to Sunday at 7PM; Saturday and Sunday at 3PM; Monday, Dec 26th at 3PM

Considered one of the most psychologically revealing plays of the first half of the 20th century, and still highly explosive for its conflicted view of Judaism, God of Vengeance is frequently translated and adapted and is the basis of Paula Vogels Indecent, which enjoyed a critically acclaimed extended run last spring.  (Plans to bring Indecent to Broadway this season have been announced.)

Got fun nekome, tells the wrenching story of a brothel owners attempt to marry off his daughter to lead a dignified religious life, only to have her drawn back into the life of sin in which she grew up.  The show is credited with presenting the first lesbian kiss on Broadway in 1923 at the Apollo Theatre on West 42nd Street.

NYRs production features several veterans of the Yiddish underground theatre scene: Shane Baker in the role of the brothel owner Yekel; David Mandelbaum as marriage broker Reb Ali, and Carad O’Brien is Hindle, a sex worker. Reissa, who plays Sarah, Yekels wife, received a Tony nomination for direction in 1991 for Those Were the Days, the last time Broadway sustained a production in Yiddish. An actress and singer, Reissa is currently touring with klezmer giant Frank London in their duo concert project Vilde Mekhaye.

God of Vengeances cast also includes a number of young actors who receive intensive training from NYR to perform in Yiddish.  Some of these under-30 actors (both men and women) include former members of New Yorks insular Orthodox communities. Playing the young ladies who fall in love are Shayna Schmidt (as Rivke the daughter) and Melissa Weisz (as Manke the prostitute).

This extraordinary opportunity to experience this play authentically in its original language is presented by the internationally acclaimed New Yiddish Rep, which is known for presenting modern theater for diverse contemporary audiences (especially non-Yiddish-speakers) in Yiddish.  Its acclaimed productions of Waiting for Godot (2013 & 2014), and Death of a Salesman (2015) — nominated last season for two Drama Desk Awards (Best Revival of a Play and Best Actor in a Play) — were credited with shedding new light on two modern theatre classics. David Mandelbaum is NYRs artistic director.

Got fun nekome premiered on East 4th Street in 1907, in what is now La MaMas Ellen Stewart Theater, next door!!!. (The premiere starred the legendary David Kessler in the role of Yekel.)

God of Vengeance went on to become a major sensation in many languages, performing throughout the Continent: in German (European premiere Berlin 1910) directed by Max Reinhardt; in Italian; Polish; Russian and Norwegian.  Isaac Goldbergs 1918 English translation premiered at the Provincetown Theatre in 1922, and was produced on Broadway by noted early civil liberties attorney Harry Weinberger, who also helped produce the plays of Eugene ONeill.  That production, which was assailed by members of the Jewish religious and cultural establishment, and others, was charged with obscenity.  The producer and company members were arrested and found guilty, though the production remained open, not to mention a hot ticket.

Eleanor Reissa (Director), has lived a life in the theatre. A Tony nominated director, international concert artist, award-winning playwright, translator, and Broadway actor. Current projects include: A published anthology of her plays THE LAST SURVIVOR AND OTHER MODERN JEWISH PLAYS; Solo concerts around the world. Recordings including VILDE MEKHAYE (WILD ECSTASY) with Frank London and the Klezmer Brass Allstars. Writing a new Yiddish opera based on Isaac Bashevis Singer’s TAIBELE AND HER DEMON with composer Judd Greenstein. www.eleanorreissa.com

Shane Baker will tackle the role of Yekl, the brothel owner, who, for the sake of his daughter, tries to buy off God with the gift of a Sefer Torah.
Shane translated and played Vladimir in New Yiddish Rep’s production of “Waiting For Godot.” He is the executive director of “The Congress For Jewish Culture,” and has been an invaluable partner in the development of our theater company.

Sholem Asch is one of the most controversial Broadway playwrights in American Theater History yet he never wrote a word in English. In the early 1920’s, two years before Mae West was thrown into the slammer for jumping into bed with sailors in her racy farce Sex, Rudolph Schildkraut starred in an English translation of Asch’s God Of Vengeance, a drama about a Jewish brothel owner who attempts to go legit by commissioning a Torah scroll and marrying off his daughter to a yeshiva student. After a six week run on Broadway, the entire cast was arrested and charged with lewd behavior for performing in what was Asch’s first full length play complete with Jewish prostitutes, a lesbian scene and a Torah hurled across the stage. Asch was later embroiled in controversy over his trilogy of novels about the founding figures of Christianity, Mary, The Nazarene, and The Apostle.You could say that Asch, who was born into a respectable Hassidic family, was as OTD as one can get, even questioning the ritual of circumcision.