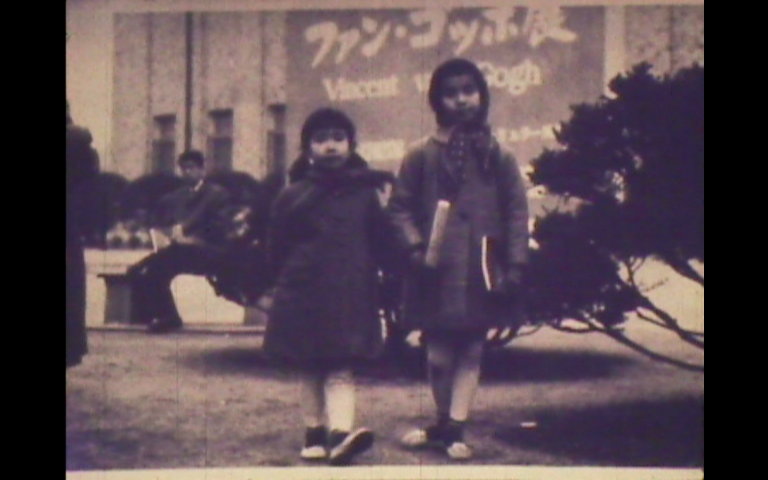 The screenings are dedicated to the film-choreographic experiments of the New York dance and film scene and follow the traces of the avantgarde movements from the early 60s to 80s. Each day there will be a different selection of exceptional and rarly known dance films presented to the audience.

Cutting between snowy fields and a raw seashore, Jonas focuses on a group of performers moving through a stark, windswept landscape. The 16mm film — silent, black and white, jerky and sped-up — evokes early cinema, while its content locates it in the spare minimalism of the late 1960s.

Filmed with an ultra high-speed camera, the original 3 minutes of encounter between two performers turn into a soft and stretched stream of movement that visualizes even smallest details.

This showing of “Two Girls Downtown Iowa” is with permission of the Artistic Estate of Elaine Summers, in special recognition of the long-time friendships Elaine Summers entertained with artists in New York City and beyond. Special thanks to Kinetic Awareness® Center, Inc. and the Jerome Robbins Dance Division, The New York Public Library for the Performing Arts.

For Commercial Erruption Yoshiko Chuma acts on Andy Warhol’s idea of 15 minutes of fame and translates and exaggerates them into a 1980s time logic: the quarter of an hour turns into only 10 seconds that frame the numerous different protagonists’ options to present and merchandise themselves and their individual role models. The reference to advertising strategies of a culminating capitalism are both critical and ironic.

Performing with a cast that includes Gordon Matta-Clark and Steve Paxton, Jonas choreographs a theater of space, movement and sound with the urban landscape of New York in a featured role. Jonas creates a highly original if enigmatic theatrical language of gesture and sound, as she and her performers play with emblematic props, unexpected rhythms of space and scale, references to painting, and audio delays.

Almost like an invisible spectator the camera captures the choreography of Five Car Pile Up from different perspectives. The relation between front credits, sound and varying velocity of recording make the show appear like a memory of the past in an empty space.

DANCERS, BUILDINGS and PEOPLE in the STREET
Rudy Burckhardt with Douglas Dunn | 1986 | 15 minutes

The performers of Splish Splash seem to reproduce the axial stop- and-go movements of the computer game Pacman in apparitional, partly repetitive movement patterns in different settings. The rapid and surreal visual language and the symbolic props create a cryptic commentary on facets of the entertainment industry.

First film by Yoshiko Chuma shows simple motions and actions in front of the landscape in Maine, USA.