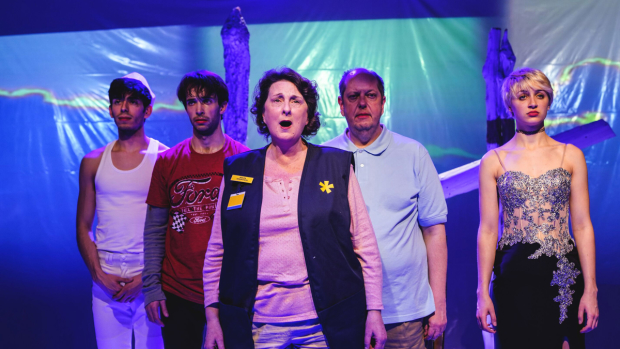 Thursday to Saturday at 8PM; Sunday at 5PM; additional performance Monday 3/25 at 8PM

The Fat Lady Sings is the wild, truthful play that we have all been waiting for! The Fat Lady Sings exposes the rotting old belief systems and moth-eaten myths that have brought 2019 America to its knees. A White authoritarian evangelical family — the father eerily like today’s occupant of the White House — lives out its excruciating and abusive confusion of real and virtual on an ancient, dream-like, falling-apart ship of false notions. Filled with rage, despair, and denial; and, exploited by politicians, preachers, and commercial corporations, the family careens toward catastrophe but also — amazingly — cathartic change.

This production was made possible by La MaMa’s Distinguished Artist Initiative,
with lead funding provided by the Marta Heflin Foundation.  Additional support from the Axe-Houghton Foundation.

Jean Claude van Itallie (Playwright) was born in Brussels in 1936, emigrated to America with his family in 1940, grew up on suburban Long Island, graduated Harvard in 1958, and in the 1960’s was a seminal force in the revolutionary New York Off-Off Broadway theater. He wrote the landmark acclaimed anti-Vietnam War play America Hurrah (that Madmen’s Don Draper was so moved by), was one of the original playwrights of Ellen Stewart’s La MaMa Experimental Theater Club, and ensemble playwright of Joe Chaikin’s Open Theater with whom he wrote The Serpent (often called the best ensemble play by any theater group). Among van Itallie’s many other plays: Tibetan Book of the Dead or How Not To Do It Again, The Traveler, War and Light. His translations of the major plays of Chekhov are frequently produced in US regional theaters, including The Cherry Orchard at Lincoln Center in 1977. Van Itallie teaches performance, writing and meditation workshops in universities and retreat centers around the country, is author of The Playwright’s Workbook and Tea with Demons, Games of Transformation. On his mountainside farm in Western Massachusetts he directs Shantigar Foundation for Creativity, Meditation and Engagement with Nature.

David Schweizer (Director) emerged from Yale Drama School in the early ’70s to be discovered and mentored by Joseph Papp, for whom he directed his explosive NYC debut, a revival of Shakespeare’s Troilus and Cressida starring Christopher Walken at Lincoln Center. In subsequent decades he has consistently directed a provocative and eclectic Array of new theater, opera and performance work, including his Obie Award winning collaboration with Rinde Eckert, And God Created Great Whales, and such notable opera productions as Richard Rodney Bennett’s The Mines of Sulfur at New York City Opera, and last year’s world Premiere of Mark Campbell and Kevin Puts’ Elizabeth Cree. Other world premieres by American composers, playwrights and performance Artists include Ann Magnuson, Marga Gomez, Mike Albo, Sam Shepard, Charles Mee Jr., Marlane Meyer, Lisa Loomer, Len Jenkin, Stephen Hartke, Julian Grant and many, many others.

Lauren Flanigan has enjoyed a thirty-year career that includes performances at the Metropolitan Opera, “Live from Lincoln Center”, La Scala, Bayerisches Staatsoper, Glyndebourne, the New York City Opera, and 15 awards for musical and humanitarian work. She started Comfort Ye… an annual musical event to raise food and awareness for New York’s homeless. This year Lauren received a Lifetime Achievement Award from the Licia Albanese Puccini Foundation. Lauren is the Founder/Director of Music and Mentoring House, a New York State not-for-profit organization that creates affordable training programs for opera singers and provides hands on mentoring and an upscale residency program to students studying in the arts in NYC.

Tony Torn is an actor and director based in New York City. He was a member of The Civilians’ R&D group in 2013-14, directing Juliana Francis Kelly’s “The Reenactors.” The rock musical “Ubu Sings Ubu” – which he created, starred in, and co-directed with Dan Safer at the Abrons Arts Center – returned in January 2015 to the Slipper Room for two nights only. He has appeared in Untitled Theater Company #61’s “The Velvet Oratorio” at the Bohemian National Hall, Karin Coonrod’s Production of “The Tempest” at La MaMa, Jay Scheib’s “Platonov” at the Kitchen, and Jeanine Oleson’s “Hear Here” at the New Museum. Known for his work with legendary experimental theater directors Reza Abdoh and Richard Foreman, he manages Torn Page, a salon space and classroom in Chelsea dedicated to the artistic legacy of his parents, Rip Torn and Geraldine Page (www.tornpage.org).

“The fire in this playwright’s belly can still radiate heat in the East Village more than a half century after the premiere of his most famous title…one never doubts either the urgency in van Itallie’s text or the commitment of the actors who deliver it.” – Mark Dundas Wood, TheaterScene.net