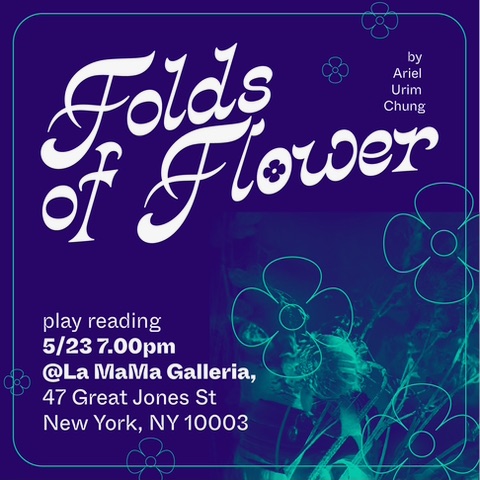 When no one else can save us, how do we save ourselves? Folds of Flower follows J, the original and J.c, the copycat, on a wild exploration journey through her psyche with her not-so-trustworthy companion, lemon candy.

Folds of Flower has been developed through the Echoes Writers Group at Primary Stages.

Ariel Urim Chung is a multi-hyphenate artist working across performance and oral history with an aesthetic constructed through trauma studies, embodied research, and her identity as a Korean woman in diaspora.

김채송 / Chaesong Kim (she/they) was born and raised by two social activists who were a part of the student-led democratic revolution and labor rights movement in South Korea. Often subconsciously, Chaesong was fueled by a kind rage towards hierarchy, oppressive system and colonization. Recently, they have been recontextualizing such dissatisfaction as love - taking care, taking time, noticing, and holding space. They deeply identify with the inheritance of “in-between” spaces, and celebrate transcendence through an embodied communal practice. Most recently their work has been a part of Seoul Dance Center’s CO-Choreo LAB, EstroGenius Festival, Ping Chong + Company's Nocturne in 2020, and La MaMa E.T.C. They have also performed in Okwui Okpokwasili's Sitting on a Man's Head, and Samita Sinha's Infinity Folds at Danspace, and Claire Chase’s Density 2036 with Constellation Chor at The Kitchen.

Yael Haskal is a playwright and performer based in New York. Her work has been performed at La MaMa Experimental Theatre Club, Dixon Place, IRT, The Tank, the Kraine Theater, and the Midtown International Theatre Festival (NYC); the Ivoryton Playhouse, the Warner Theatre (CT); Theatre Simpson (IN); the InspiraTO Festival (Toronto, CA); and other theatres across the U.S. Recent performance credits include Polyxena in The Trojan Women (La MaMa/Andrei Serban) and Scipio in Caligula (New Ohio Theatre). Yael is an ensemble member of the New York Neo-Futurists, and was a 2020 Young Playwright in Residence at the Echo Theater Company (LA). www.yaelhaskal.com

Katherine Bahena-Benitez (They/Elle) is a Mexican-Indigenous Gay Theatre & Film actor, poet, director, dancer and advocate. They’ve had the pleasure of training and performing with the American Conservatory Theatre, the 24HourPlays, Teatro Espejo, and Broadway Advocacy Coalition ‘Theater of Change’ at Columbia University. They are also a Miranda Family Fellow and have been featured in Apostrophe’s Digital Magazine. Katherine says, “Con Mucho Amor y Cariño I do this for Mi Gente.”Instagram: @_imjstlivin