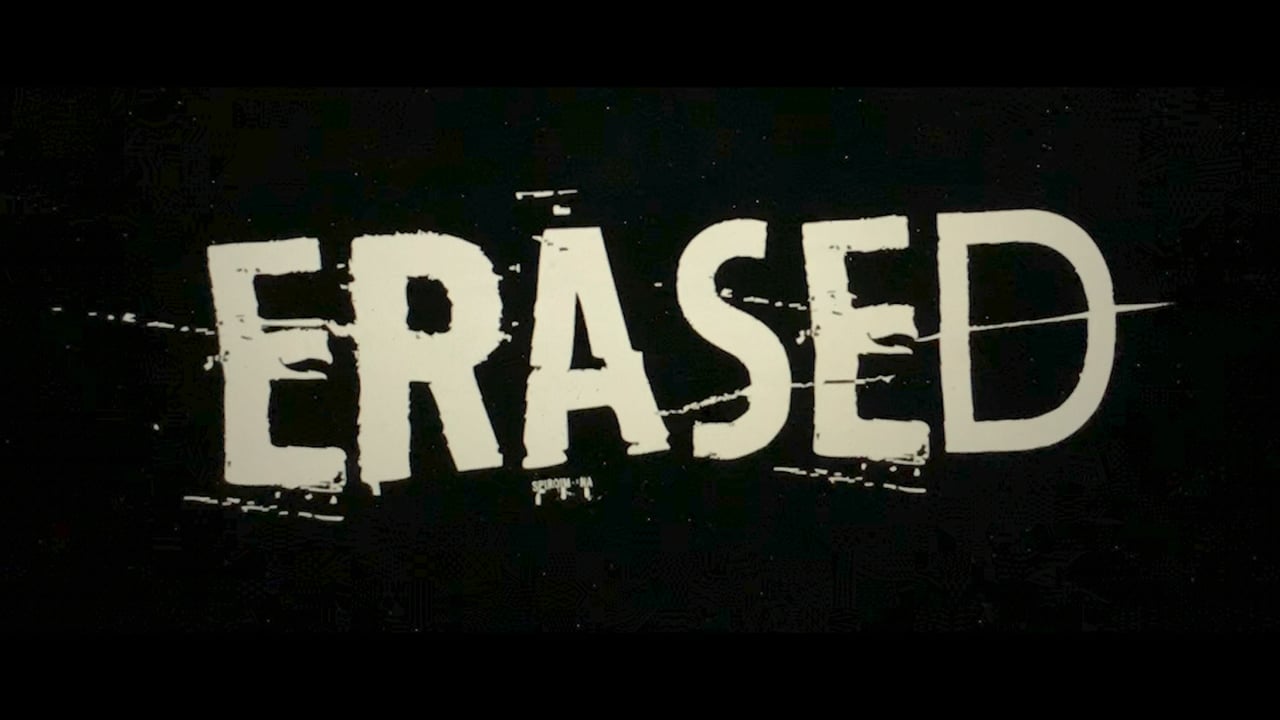 Set within a claustrophobic room of a greeting card factory, four workers create ready-made sentiments for the masses. As each worker navigates their relationship to power, in a world run by an anonymous system, we begin to learn what exists past the four walls: people are being ‘disappeared’ and a resistance of women have been lost …

Inspired by Francis Bacon’s screaming popes, Coleen MacPherson questions the themes of loneliness and complicity in the violence inflicted on others within our rapidly changing world. A dystopian parable that is poetic, violent, darkly humorous and imagistic:  an awakening for us all to look deeply into ourselves and the state of our planet.

On March 13th, 2020, Erased was in rehearsals in Toronto when it abruptly stopped due to COVID-19.  As we slowly learned the reality we were all facing, that theatres were shutting down and Experiments at La MaMa were going digital (meaning we weren’t coming to New York physically) —  we decided to use this moment as a way to experiment across distance; to collaborate across borders when the Canadian and American borders are closed.

Over the past week we have been exploring the medium of zoom and the tiny cameras in our computers.

Entirely shot on Zoom in the confines of our apartment —   from Toronto to New York; Charlottesville, Virginia and Los Angeles, we invite you to a play reading experiment, a live screening through La MaMa’s Facebook Page.

Michael Ayres (OLIVER) is an actor based in Toronto. Theatre: Sanders in Casimir and Caroline (The Howland Company/Crow’s Theatre); Jackie Savage in Bang Bang (GCTC); Kyle in What I Call Her (In Association/Crow’s Theatre). This would have been his first season at the Stratford Festival. Film/TV: Jupiter’s Legacy (Netflix), The Boys (Amazon), Star Trek: Discovery (CBS).

Yael Haskal (GRACE) is a playwright, poet, and performer based in New York. Her work has been performed at La MaMa Experimental Theatre Club, Dixon Place, IRT, The Tank, the Kraine Theater, and the Midtown International Theatre Festival (NYC); the Ivoryton Playhouse, Trinity College, the Warner Theatre (CT); Theatre Simpson (IN); the InspiraTO Festival (Toronto, CA); and other venues across the U.S. Recent stage credits include Polyxena in The Trojan Women (La MaMa) and Scipio in Caligula (New Ohio). She is the creator of the comedic webseries “Fun Moms,” an ensemble member of the New York Neo-Futurists, and a current Young Playwright in Residence at the Echo Theater Company (LA). www.yaelhaskal.com.

Jason Jenn (Video Editor) is an interdisciplinary multimedia artist, creating works as performer, writer, visual artist, director, producer, designer, and video editor.  Jason is an avowed “Protean-of-many-trades” who enjoys combining various sensory delights (words, sounds, music, movement, video, and other visual forms) for exhibition on stage, on screen, in gallery, and for site-specific locations.   Under the alias Troubadour Trixter, Jason delivers provocative ideas in the tradition of the Trickster archetype. Mixed alongside uplifting and imaginative storytelling including ongoing performance-based projects is creating dramatic interpretations of queer poetry. Since 2012 he has produced works for the City of West Hollywood’s One City One Pride LGBTQ Arts Festival, including three years as director/producer of the popular Stuart Timmons’ City of West Hollywood LGBTQ History Tour. Jason produced three one-man shows written by and starring the renowned Robert Patrick Playwright (“Kennedy’s Children”, “The Haunted Host”).  Jason was the first Production Manager of gallery and stage productions for the Los Angeles LGBT Center’s Lily Tomlin & Jane Wagner Cultural Arts Department. He documents the LA underground performance art scene when not performing in them at numerous venues across town. From 2014-2019 Jason worked as the Operations Director for a multimedia video post production and Videowall consultation company called Holonyne Corporation (also known as PennRose Studios & Virtularium Video wall Gallery).

Guy Livneh / GeLato (Cinematographer / Designer) watched clockwork orange in an empty cinema at age thirteen and was irreversibly affected by the contrast between white overalls and black bowler hats. On a constant search for humanity ever since. Had the great opportunity of collaborating with many inspiring directors including Mary Lambert, Werner Herzog, Patty Jenkins and Jason Trucco.

Coleen Shirin MacPherson (Playwright) is an international theatre artist, based in Toronto, Canada. She trained at Ecole Jacques Lecoq in Paris and was part of a year-long programme connecting movement-based theatre practice to playwriting. She founded a company called Open Heart Surgery Theatre which engages in cross-cultural collaboration and experiments with multiple languages on stage. Her play First Draft (Camden People’s Theatre, Mimetic Festival, London, UK) had a multilingual version produced in Cairo, Egypt at Falaki Theater with StudioZat. Coleen has worked with Tinderbox Theatre in Northern Ireland, Wet Picnic in the UK and has toured work to Egypt, Poland, France, UK, U.S.A and China. With Mana Contemporary and 2nd Floor Rear in Chicago she co-created a silent protest against the EO Travel ban with Rachel Ellison when her Iranian-Canadian musicians couldn’t make it over the border for their performance on ritual.  Coleen is interested in work that bends borders and speaks to the current moment. RECENT: This Is Why We Live, US premiere in New York City at La MaMa, part of the 58th season, Assistant Director to  Mumbi Tindeyebwa for Trout Stanley by Claudia Dey (Factory Theatre). Currently she is developing a new play inspired by Glenn Gould and is devising a new work based on Leonora Carrington with theatre creator, Martha Ross.  Coleen wishes she could fly.

Valois Marie Mickens (MARGIE) hails from, our nation’s capital, Washington, D.C.   She originally came to New York in ’69 to be a fashion illustrator, but met Ellen Stewart and began a career at La MaMa experimental Theatre Club. She has worked extensively with director Andrei Serban and worked with him as assistant director at the National Theater of Romania. Valois is an Elder member of the Great Jones Rep. One film in her credits, Fender L’Indian won best film at the festival of Toulon, France. (“I don’t know why”).

Alix Sideris (RENÉ) is an actor, movement director, intimacy director, theatre creator and educator based in Toronto. Her work, in its various incarnations, has been seen at The National Arts Centre, Crows Theatre, Opera Lyra, Buddies in Bad Times, The Great Canadian Theatre Company, Theatre Calgary, Toronto Centre for the Arts, St. Lawrence Shakespeare Festival, Odyssey Theatre, the 2015 Pan Am Games, Deluxe Hot Sauce, Evolution Theatre and STO Union, to name a few.  At present, Alix is a recurring character in Assassin’s Creed-Odyssey and curates a global meditation called The Wait (https://www.facebook.com/TheWaitGenerativeHealing

Jason Trucco (Director) is an artist and director who applies his aesthetic to plays, music videos, and gallery art. RECENT PLAYS— Richard III And They’ve Never Heard Of Love at Barcelona’s Festival Grec; The Old Man & C (music by Carlos Alomar) at Gentle Monster’s Underground Flagship in NYC; Six Sex Scenes at Sala Beckett & Teatro La Gleva in Barcelona and Fanfulla in Roma; Hi-Fi / Wi-Fi / Sci-Fi (with Billy Clark) with CultureHub at SeoulArts in Seoul and at La MaMa ETC in NYC; AM New York writes of Hi-Fi / Wi-Fi / Sci-Fi, “An all-too-rare success story within the realm of multi-media endeavors that bite off more than they can chew” SELECTED MUSIC VIDEOS: Billy Idol, Macy Gray (World’s first 360 degree interactive video); Glen Campbell, Devo, Queens Of The Stone Age  (all four with Kii Arens) and more.

John King (Sound Design) is a composer, guitarist and violist who has worked collaboratively with and been commissioned by Kronos Quartet, Brooklyn Youth Chorus, Ethel, the Bang On A Can All-Stars, Avant Media and the Albany Symphony/Dogs of Desire as well as by the Merce Cunningham Dance Company, New York City Ballet, Stuttgart Ballet, Mannheim Ballett, and Ballet BC. He has written seven operas: ping and what is the word, with texts by Samuel Beckett; impropera, using randomly selected text msg’s from the singers’ cell phones; herzstück/heartpiece, with text by Heiner Müller; la belle captive texts by Alain Robbe-Grillet; and Dice Thrown, based on the Stéphane Mallarmé poem, as well as his most recent SapphOpera, using fragments of Sappho’s poetry. He presented the world premiere of Piano Vectors for 6 grand pianos in the 40,000 sq. ft. Knockdown Center in May 2015. Also at Knockdown Center in October 2018 he premiered his 4-hour long KOSMOS for string quartet and live electronics. King has worked on five installation/productions with CultureHub, some involving telematic performance works. He was Co-Director of the Music Committee for the Merce Cunningham Dance Company from 2003 until MCDC’s closing at the end of 2011. He has received grants from the NEA/Music in Motion, New York State Council on the Arts, Jerome Foundation, Asian Cultural Council, Meet The Composer/Readers Digest Dance Commissioning Program, Minnesota Composers Forum, the Fund for US Artists at International Festivals, and New York Foundation for the Arts. He is also the recipient of the 2009 Alpert Award in the Arts for Music and the 2014 Foundation for Contemporary Arts Award for Sound/Music. Recently King was awarded a Rockefeller Foundation/Bellagio Residency for March 2016, in addition to residencies at The McDowell Colony and The Emily Harvey Foundation residency in Venice, Italy. www.johnkingmusic.com

eugene the poogene (Producer) was an astronaut before he was a performer and was instrumental in the setting up of space station STS-111 (along with other members of Expedition Three), now famous for their work on the Biomass Production System. in his spare time, he likes to sit in the dark and repeat the word “larvae”. eugene the poogene loves ellen stewart and the la mama.  he also loves all of his beautiful friends, family, directors, and teachers so much it’s nauseating..  i mishyoo!”