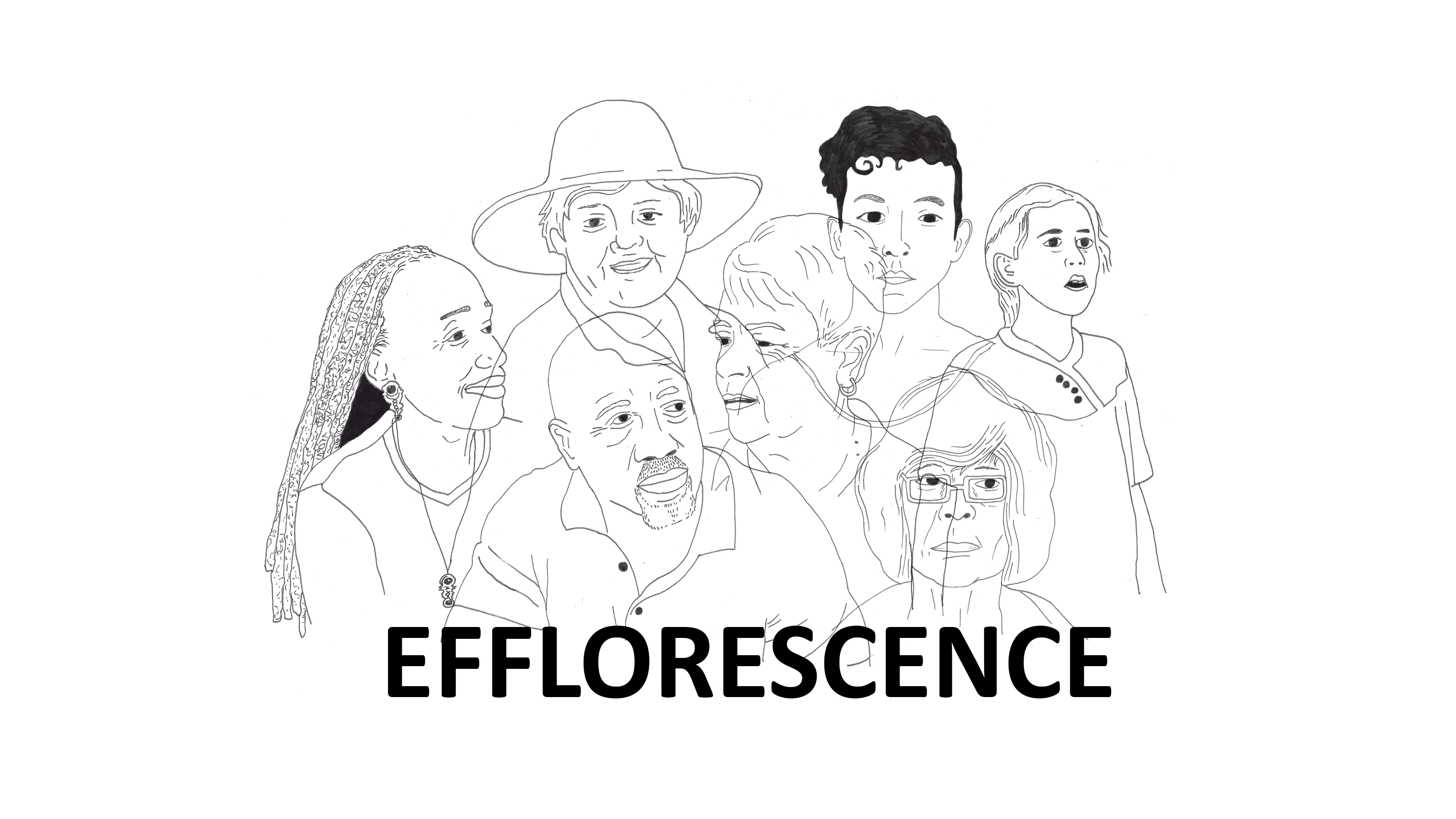 Listen to all 7 episodes on this page for free!

My name is Esther

They die between my brain and my tongue

But I can still think

My name is Nivea

A year ago I left

I have the uncanny feeling

that the unexpected is about tohappen

That a world we know so well

is about to change forever

My name is Wanda

Today is my birthday!

60 years ago, when I was seven years old

I learned there is only one way

to draw a tree

It was a bitter lesson.

I’ve been here since I was nine.

Usually the days go by all ho hum-

smooth as Mac and cheese

But this week everything’s off kilter

My name is Bruce

The only man here

I’m what they call a big guy -

Destroyed my mind with poetry

My name is Emory. I play the violin

My pronoun is they

Before I came here I lived in the city

My passion was dancing

They called me Emory Sizzlebutt

My name’s Jeannette. In town they call me Ms.Young.

I lived alone for a lot of years.  Not any more.

Efflorescence tells the story of six disparate people who have been living together for a year in an old farmhouse in the Catskills that has been transformed into a safe haven for Vulnerable Expendables. The story unfolds over seven nights that coincide with the nights on which each episode will be presented. The characters begin each night by singing together while they wash their hands outside in a tub of warm water. Each night they take a turn telling stories - stories of life-changing encounters with dogs, snakes, obscene plant life, sea nymphs, and the School of Disembodied Poetics. Linking these tales is the story of their evolving relationships - their struggle and fascination with each other and the natural world around them. The first episode begins on a night when a mysterious stranger arrives, shaking up the world they have created for themselves.

A new 10-15-minute audio segment will be released daily from March 29 – April 4, 2021, on this page. On April 6, 2021 at 7PM, La MaMa and Talking Band will premiere the full piece followed by a post-show conversation with the artists involved. 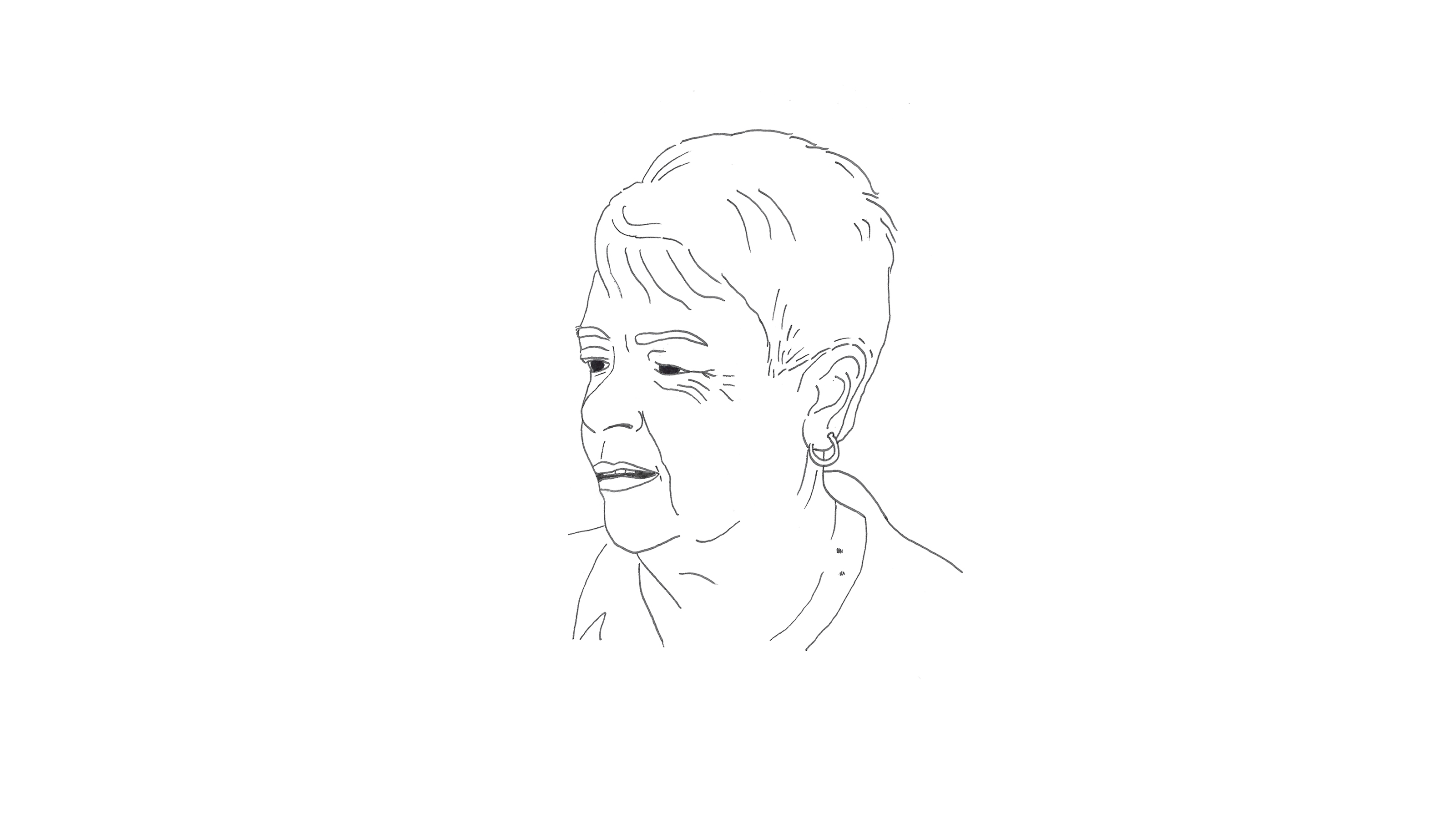 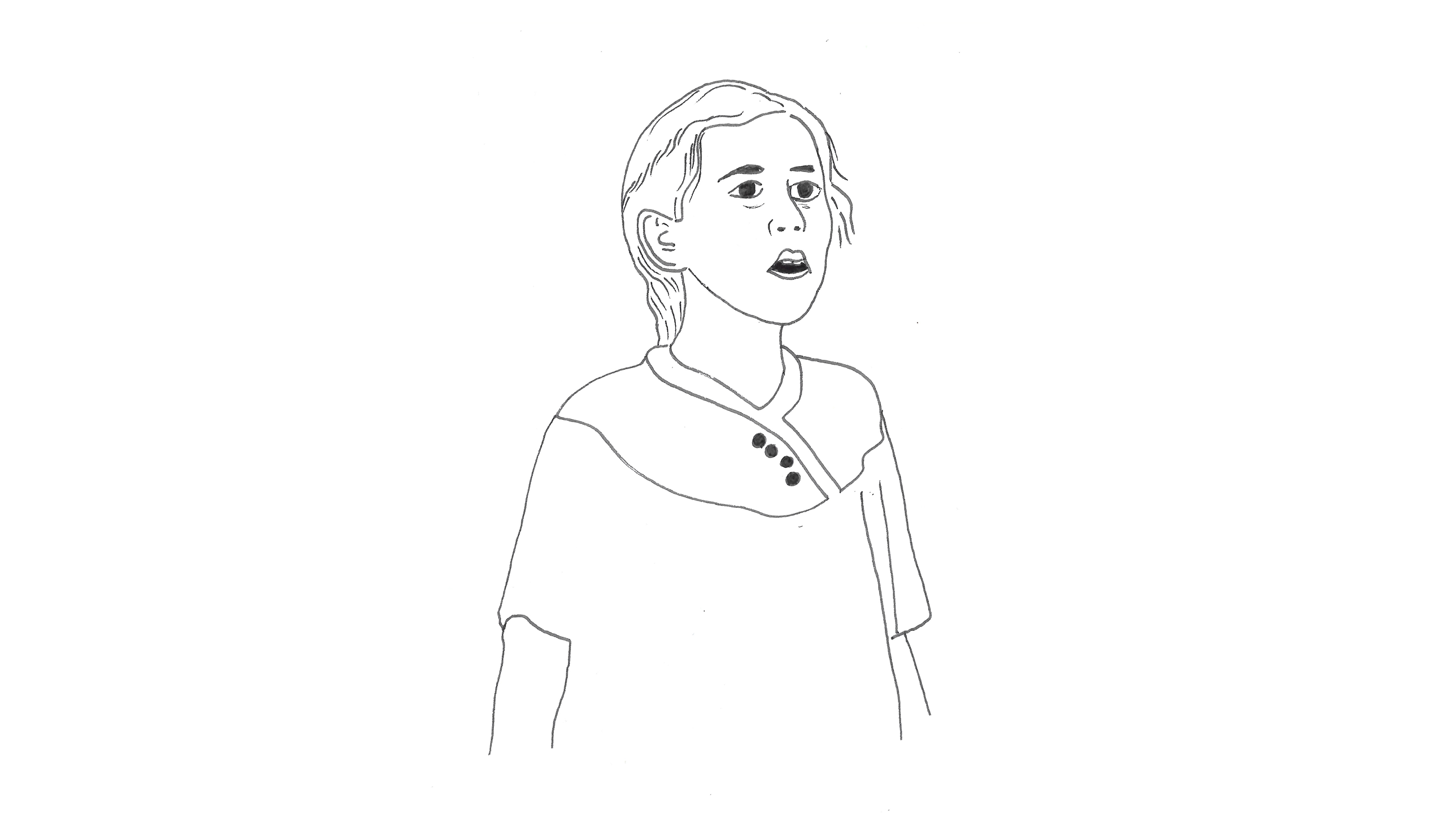 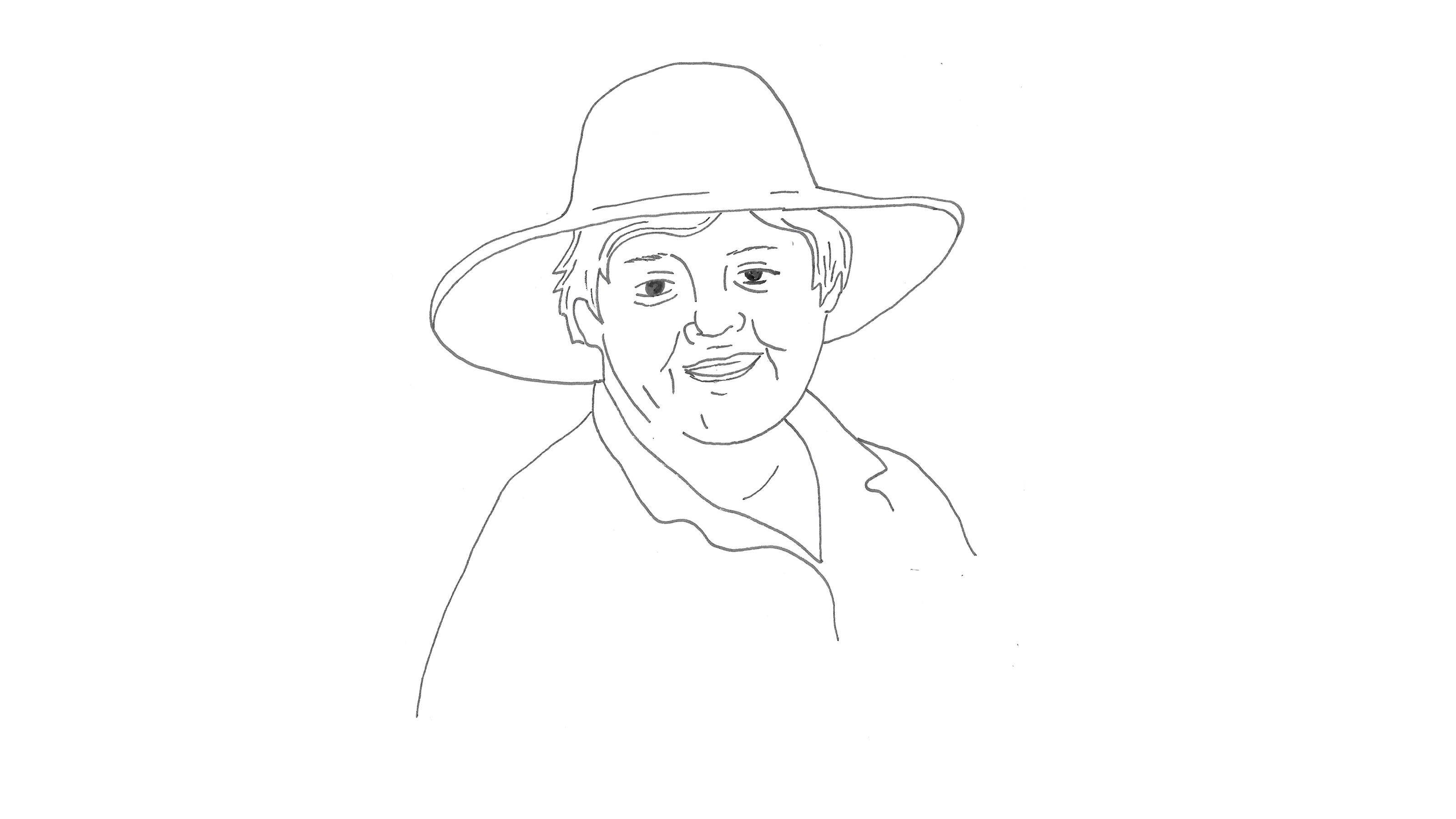 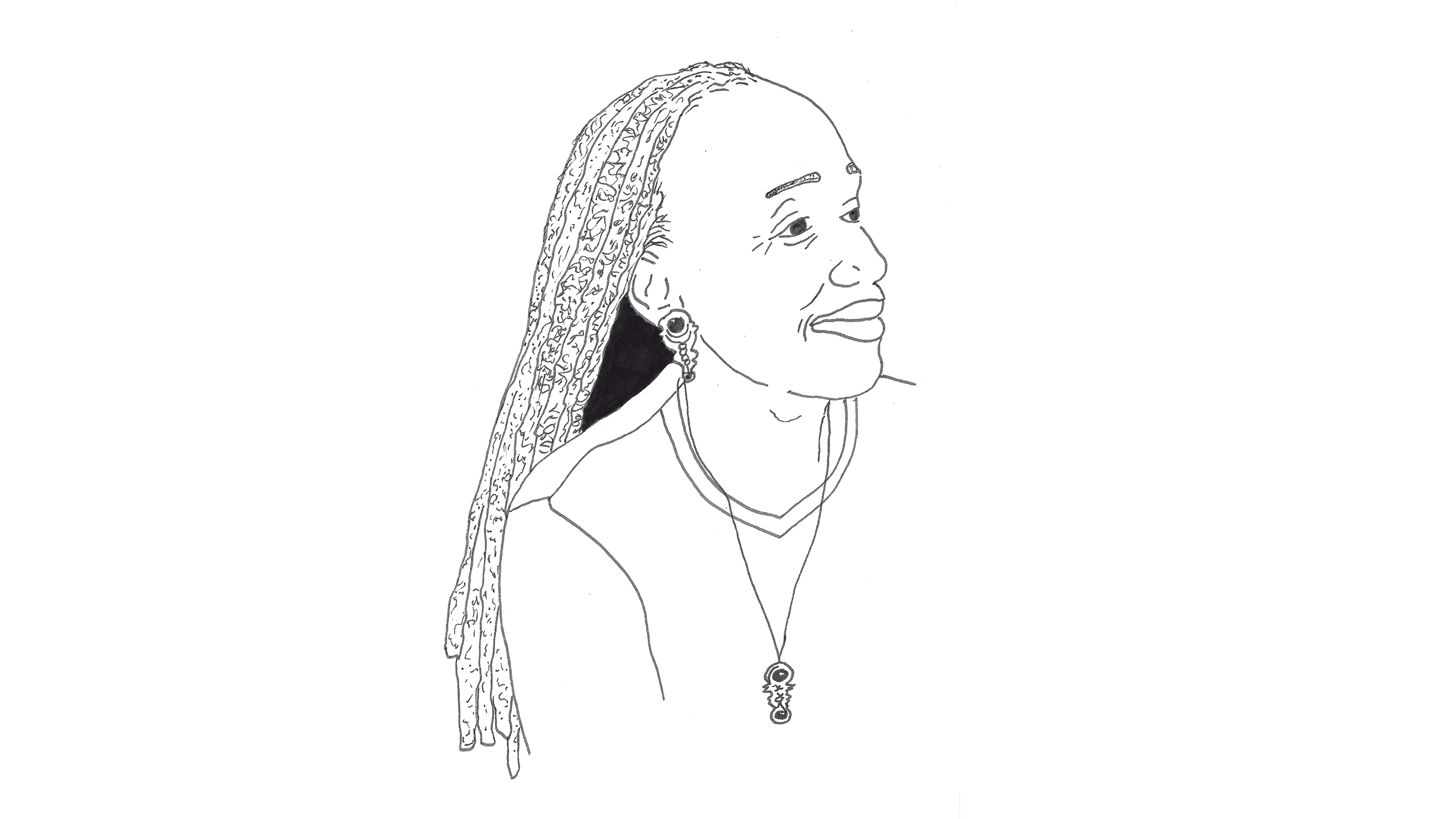 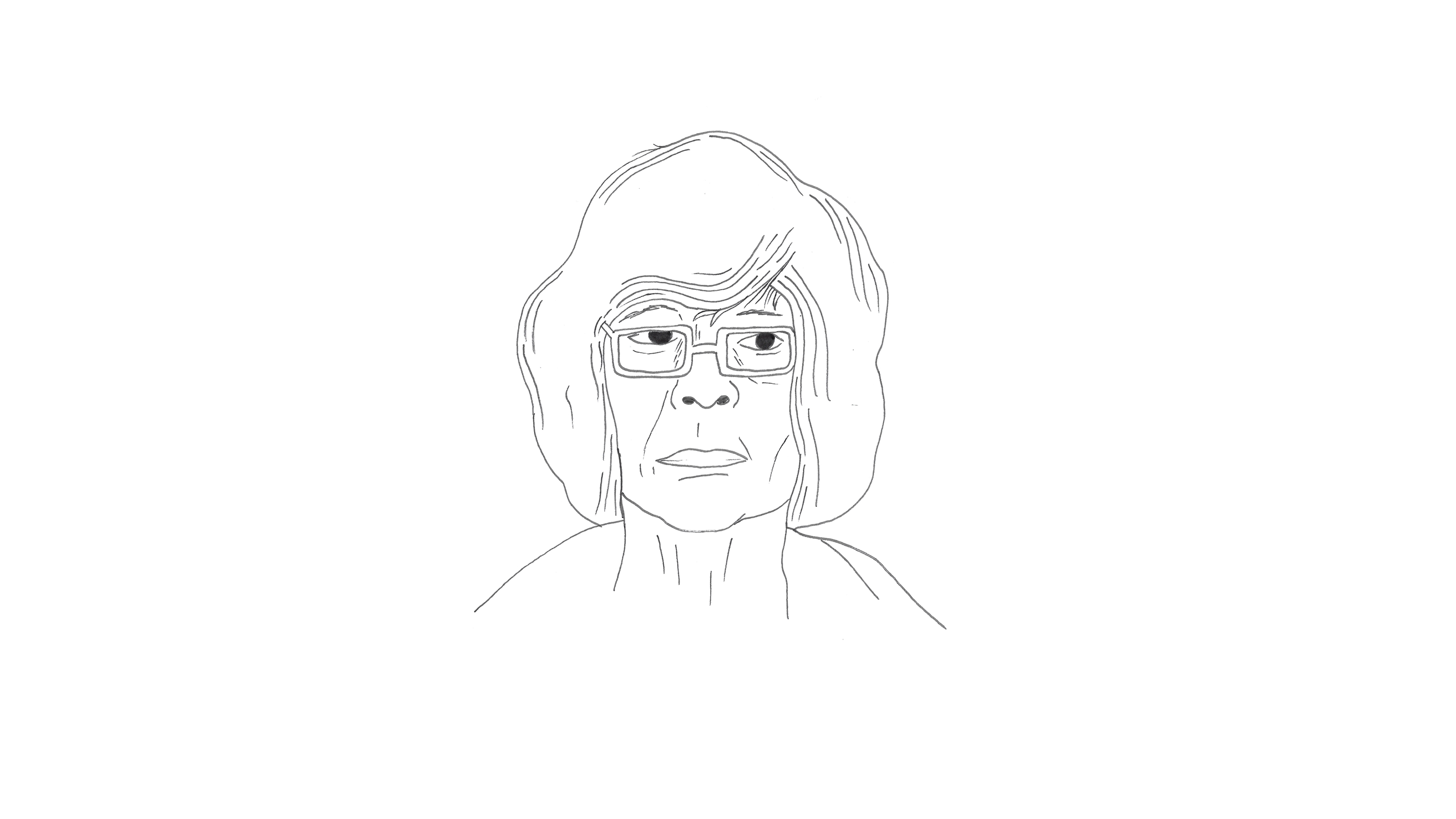 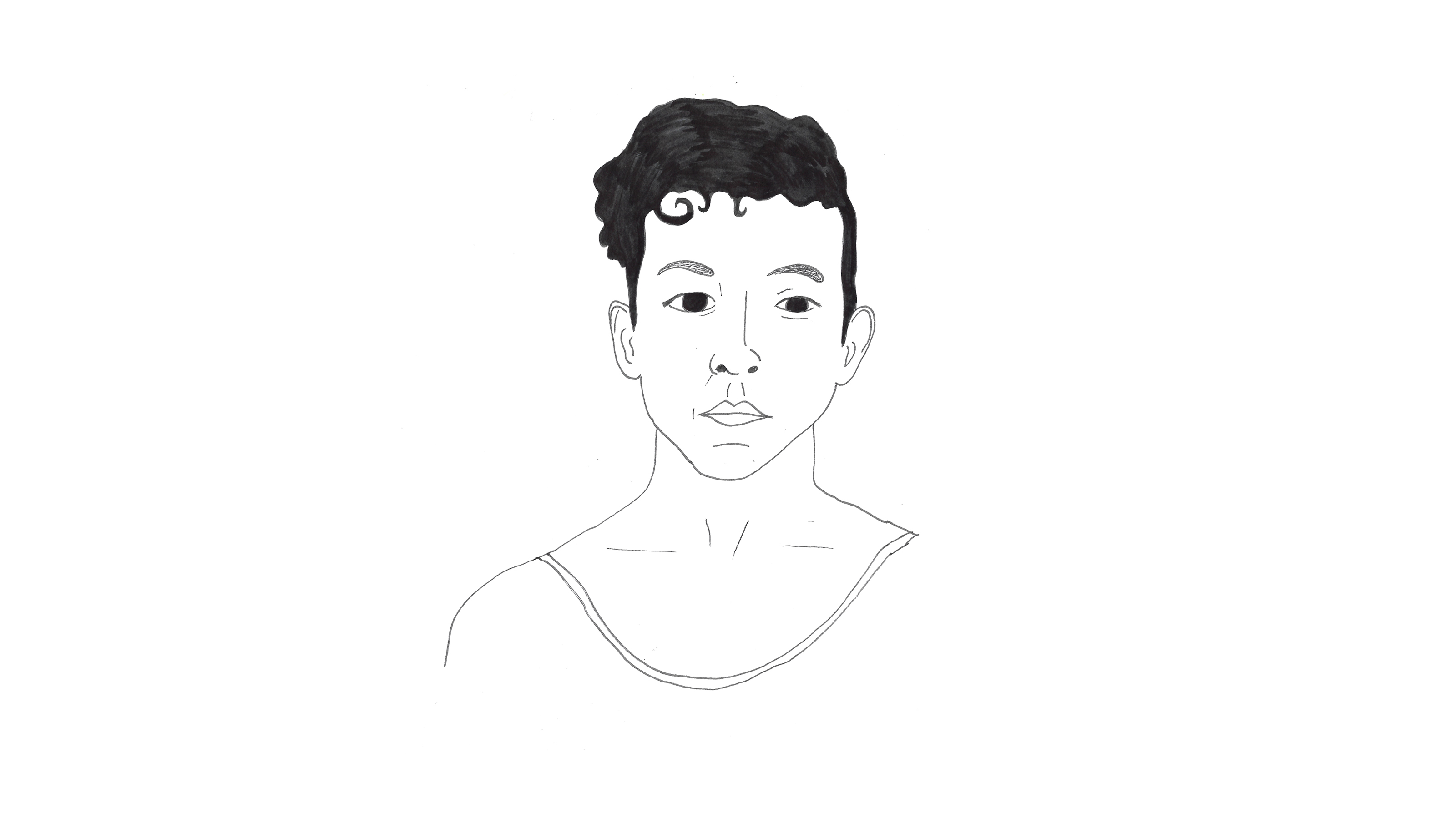 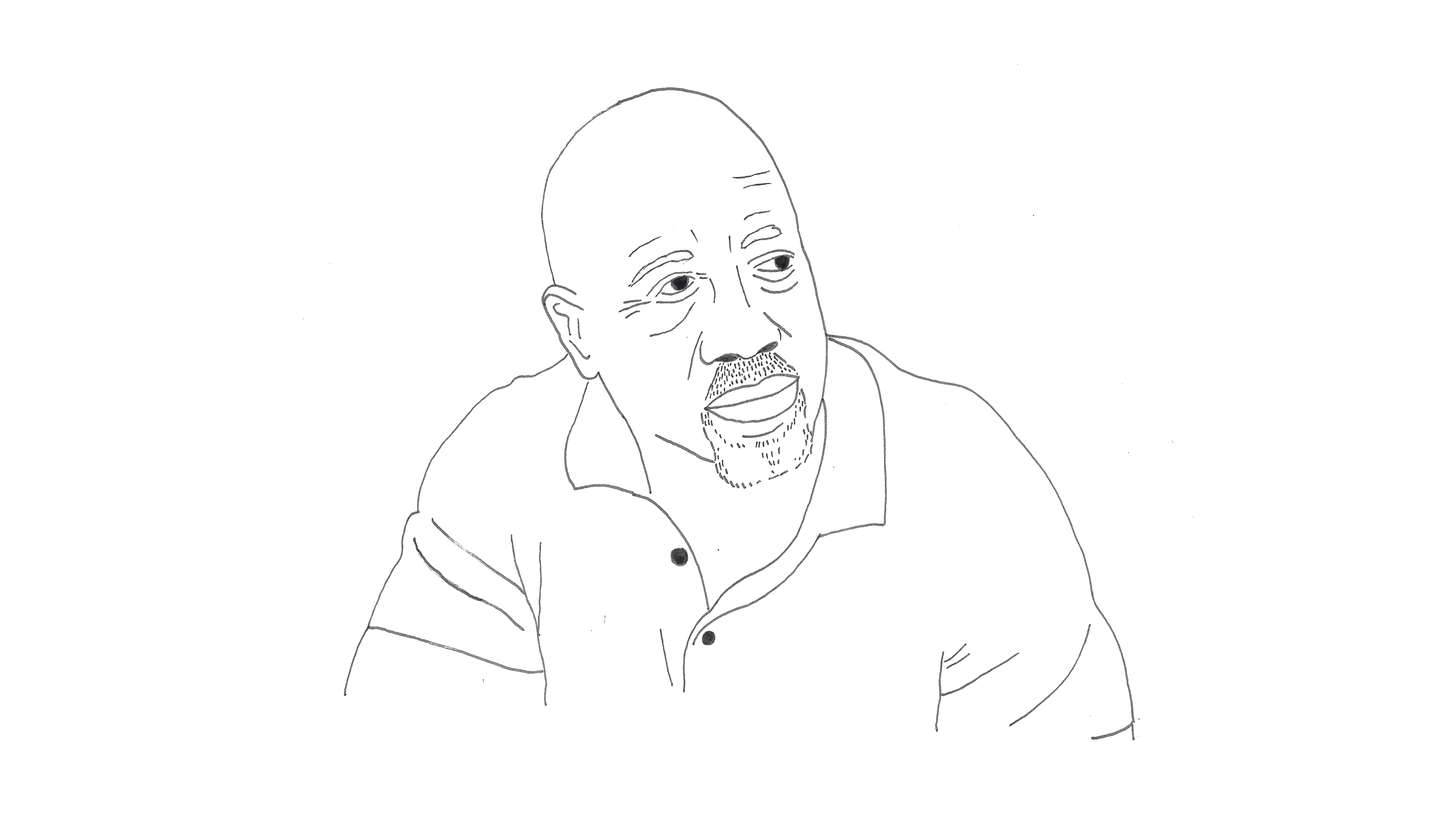 WILL BADGETT is proud to have first performed with Talking Band in their 1984 restaging of Pedro Paramo at La Mama, and has performed in over twenty Talking Band productions over the years here in the states as well as Russia, France, Italy and South America. Some favorites include: New Cities, Big Mouth, Imminence, Burnished by Grief and of course Galileo in Star Messengers all at La Mama.

SULI HOLUM is a Philadelphia based theatre performer and creator.  Currently a member of the Wilma Theatre's HotHouse Company in Philadelphia, she was a founding member of Pig Iron Theatre Company, and Co-Artistic Director of Stein | Holum Projects, whose works include Drama Desk-nominated Chimera, and The Wholehearted.  She recently launched Suli Holum/The Work, a Philadelphia-based incubator for live performance. A recipient of a Drama Desk Award, a TCG/Fox Resident Actor Fellowship, a Barrymore Award, an Independence Fellowship, and a NEFA Touring Grant, she is also an accomplished playwright, choreographer and director whose work has been supported by the Orchard Project, Actors Theatre of Louisville, Playwrights Horizons, New Dramatists, the Playwright's Center, The Ground Floor at Berkeley Rep, and HERE, and presented by FringeArts, The Public Theatre/UTR, La Jolla Playhouse, Center Theatre Group, Z Space and The Gate (London).  She is currently pursuing her MFA in Creative Writing at Goddard College where she was the recipient of the 2020 Engaged Artist Award.

VIOLET NEWMAN is a 16-year-old actor and singer-songwriter from Brooklyn. Her love of experimental theater started in 2014, when she played J in 600 Highwaymen’s Employee of the Year, which toured  Europe and the U.S. and ran at the Public Theater’s Under the Radar festival. She appeared at La MaMa in Grandma’s Make People, Parts 1 & 2 in 2015 and performed in Sarah Delappe’s Parabola at Jack. She has also performed at Dixon Place and Joe’s Pub. She enjoys writing songs on her guitar and making French toast at 2 a.m. You can find her music on streaming platforms under Violet Newman.

TINA SHEPARD is a founding member of The Talking Band. She was awarded an OBIE for her performance in The Talking Band's The Three Lives of Lucie Cabrol. Based in NYC, she has toured & performed all across the US, Canada, & Europe. She teaches acting and aikido at NYU Experimental Theater Wing.

LOUISE SMITH. She is a writer, performer, and therapist. She was in Ping Chong and Company for eleven years, and also appeared in works by artists Meredith Monk, Julie Taymor, Lizzie Borden, and Ann Bogart. Since 1984, she’s written and performed sixteen solo pieces.  Smith has worked with Talking Band since the 1980’s. In 2017 she created a new duet with Ellen Maddow entitled Fat Skirt And Big Nozzle, based on the paintings of James Ensor.  She taught theater and performance  at Antioch College for 24 years and currently is a therapist in Yellow Springs Ohio.

CONNIE WINSTON. Connie’s most recent project was American Captives: Lena Baker & Sandra Bland, for which she was commissioned and premiered at Dixon Place in New York City in the fall of 2018. American Captives was subsequently selected by the United Solo Theater Festival as an Official Festival Selection and performed on Theatre Row in New York City in October 2019. In addition, she has performed at venues such as La Mama, H.E.R.E., The WorkShop Theater, New Dramatists, the Ohio Theatre and Soho Rep. Selected works include: Lemkin’s House by Catherine Filloux and directed by Jean Randich; Belize written and directed by Paul Zimet (LaMaMa); Fishes by Diana Son (Soho Rep); Bad Women written by Sidney Goldfarb and conceived/directed by Tina Shepard (H.E.R.E), Doubt (Riverside Theater), Bee-luther-hatchee (Florida Studio Theatre); Having our Say (Hangar Theatre). Occasionally, Connie may be seen on re-runs of Law & Order and Conviction in her recurring role as Judge Shirley Taylor.

MARIJA KOVACEVIC is a classically trained experimental violinist, improviser and educator from Serbia, based in Brooklyn. Past projects with The Talking Band include City Of No Illusion, The Golden Toad. Marija also works with The Million Underscores (Lapa, TELE-VISION: on spiritual displacement, Chic Unique and Four Fours presented at MoMa). She used to perform all over NY, from artist run places in Brooklyn to the Lincoln Center.

SAM KULIK. Before respiration got a bad name for its contribution to the global pandemic, Sam Kulik was often seen on crowded stages taking long, deliberate breaths and depositing them into his trombone, the business end of which he would point more or less directly at the public. Not having ever knowingly infected anyone with anything other than groove, Sam has nonetheless kept his tromboning private for the past year and is thrilled to have this opportunity to contribute a recorded representation of it for this, his fifth production with the Talking Band. www.samkulik.com

ELLEN MADDOW has been working in the theatre in New York as a writer, composer, and performer for the last fifty years. Born in Los Angeles, California, the daughter of a screenwriter and a modern dancer, she attended Hollywood High School and received a B.A. in theatre from Antioch College in Ohio. She was a member of the Open Theatre from 1971-1973, performing in Terminal, Mutation Show, and Nightwalk. Ellen is a founding member of the Talking Band. Works she has written for the company include Lemon Girls or Art for the Artless,  Fusiform Gyrus - A Septet For Two Scientists and Five Horns; Fat Skirt Big Nozzle (with Louise Smith), Burnished by Grief, The Golden Toad (with Paul Zimet); The Peripherals; Panic! Euphoria! Blackout; Flip Side; Delicious Rivers; Painted Snake In A Painted Chair and five pieces about the avant-garde housewife, Betty Suffer. In addition to writing music for a number of the works mentioned above, she wrote the scores for Talking Band’s production of The City of No Illusions, The Room Sings, Marcellus Shale, Taylor Mac’s The Walk Across America For Mother Earth, and Liz Duffy Adam’s Buccaneers (Children’s Theatre of Minneapolis) among others. Ellen  performed in Clare Barron’s Dance Nation at Playwrights Horizons for which she received a Drama Desk Award. She also performed in the Steppenwolf production of Dance Nation in Chicago. She is a recipient of a 2020 NYC Women’s Fund for Media, Music, and Theatre award for Lemon Girls or Art for the Artless. She  is also the recipient of an OBIE Award, a NYFA Playwriting Fellowship, a McKnight Playwriting Fellowship, the Frederick Loewe Award in Musical Theatre, and the NEA/TCG Award for Playwrights.   She is an alumnus of New Dramatists.

PAUL ZIMET is the Artistic Director and a founding member of Talking Band.  Born and raised in New York City, he studied clarinet and voice at the High School of Music and Art, comparative literature at Columbia College, and medicine at Harvard Medical School. Wrote and directed  City of No Illusions,  The Room Sings, The Golden Toad (with Ellen Maddow) Marcellus Shale, New Islands Archipelago, Imminence, Belize, The Parrot, Star Messengers, Bitterroot, Party Time, Black Milk Quartet and New Cities. Directed many new works for Talking Band including Burnished by Grief (Ellen Maddow) and The Walk Across America for Mother Earth (Taylor Mac) and Part I of The Lily’s Revenge (Taylor Mac). Recently, Zimet performed in Mallory Catlett’s  Bessie and Obie award winning This Was The End.  Obie award for direction, and three Obie awards for work with the Open Theater and Winter Project directed by Joseph Chaikin; The Frederick Loewe Award in Musical Theater; and a Playwrights’ Center National McKnight Fellowship; playwright alumnus of New Dramatists; Associate Professor Emeritus in Theatre, Smith College.

Additional support from The NYC Women's Fund for Media, Music and Theatre by the City of New York Mayor's Office of Media and Entertainment in association with The New York Foundation for the Arts and by public funds from the New York City Department of Cultural Affairs, in partnership with the City Council.