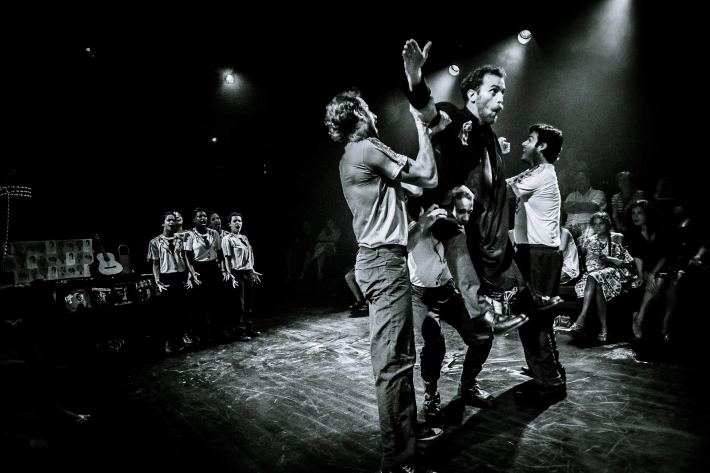 “La MaMa represents the avant garde of the experimental theater. Over almost six decades of existence, it has produced and hosted very important works and the most restless and transgressive artists in the world scene, transforming itself into a creative engine, an oasis of creative, cultural and social freedom”, comments Lenerson Polonini, Brazilian Cultural Ambassador of La MaMa and guest curator of this edition.

The hyper Amazonian pedal is a simulacrum of a reality that is happening now - the pedal formed by the continuous sound of living things in the Amazon, in addition to the other sound forces of Nature. Through a construct in Live / MAX MSP for automatic reproduction, controlled randomness and sound transformation of small passages, arranged in an immense audio bank collected by me + associates / partners in the most diverse situations in the Hiléia Amazônica.

EVERY KING DESERVES KISS FROM REALITY by Christina Fornaciari

"Every king deserves a kiss from reality" is a performance about the abysmal distance between State and society, where making politics have become an anti-democratic device.

Character literally immersed in an everyday sea seems to be being "drowned" or rejected by everyone including those who apparently love him. PlasmaCriatura dances live with the people present. Body Performer: Otavio Donasci. Virtual performers: Achileu Nogueira, Lucy Costa. Event:  II BODEARTE (Natal, R. Grande do Norte, Brazil, 2012).

With first features, experimental and underground deeds, being sistematically prohibited by the Brazilian military government, Neville D'Almeida continued to be a censored filmmaker even after he reached the post of box office champion wirth "A Dama do Lotação" on account of the themes of his films. In "Rio Babilônia", which holds the record of the most replayed film on Brazilian television, the director unveils the real Rio de Janeiro that hides underneath the touristic façade of  "wonder city", going neck deep in plots that exploit corruption, gold smuggling, drugs and, of course, sumptuous orgies in a Brazilian "La Dolce Vita" that only Neville D'Almeida could pull off, with an atmosphere completed by Robson Jorge and Lilcoln Olivetti's anthologic soundtrack.

Mundo Grampeado - Uma Opera Tecno-Tosca is an underground musical from Rio, a mixture of political satire and comedy of customs. Staged by the artistic collective Cia Monte de Gente and written by playwright Marcus Galiña, it prophetically narrates, in a rambling plot, a few years before its completion, the rise of fascist forces in Brazil. It tells the story of a pirate radio located in a favela in Rio, which has access to a wiretapping device, causing immense turmoil in local and global geopolitics. For the Downtown Variety, is the final scene of the play that will be presented, where the protagonist dialogues with the statue of Christ the Redeemer, ending in an unusual musical Duet.

Live and interactive performance transmitted in real time. Under the mask the creative interpretation in an improvised session with percussive sound. Marungo - clowns of kings' revelries "The Marungos have rules to obey. One of them is to respect the house where they enter. Another important aspect is to sing, no matter for whom. An old singer in the group watching me dance said: 'This fellow there is an old bastion, he knows how to dance!

Pedro Granato presents the solo performance “Berlam”, an unique post-everything character that tells with music and sarcastic humour what is happening in Brasil 2021, directly from the theater Pequeno Ato in downtown São Paulo. Berlam was in the soundtrack of the movie "José e Pilar" about Saramago and launched the album Berlam e Banda Larga as a performer and songwriter. For two years, had the weekly program Berlam's Concert on IG portal.

The performance action consists of reading fragments of prose and poetry by Brazilian author Hilda Hilst (1930-2004), one of the most important names in Brazilian literature. Her work brings together the sacred and the profane, eroticism and pornography, having written both poetry and prose, as well as chronicles and theater.

BY A THREAD by Gabriela Leite

It brings together movement, music, and dramaturgy, in a dialogue between languages. The drama in the face of psychic fragility, the fear of loss, madness and loneliness faced because of the COVID-19 pandemic. Between the scream and the silence, the transgression of space, oscillations between catharsis and withdrawal invite the viewer to dive into their own emotional experiences and welcome them as pertinent to the human condition. 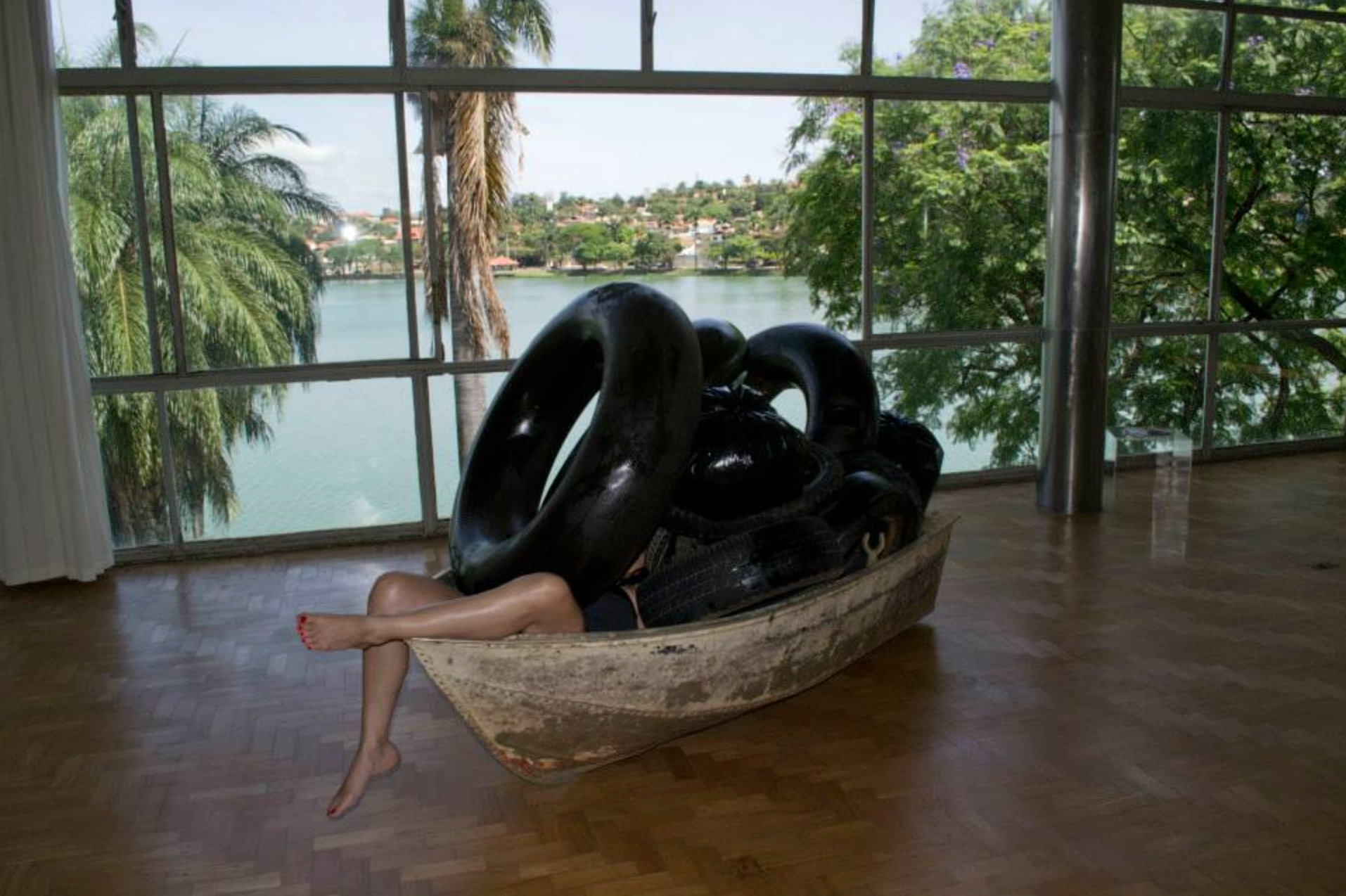 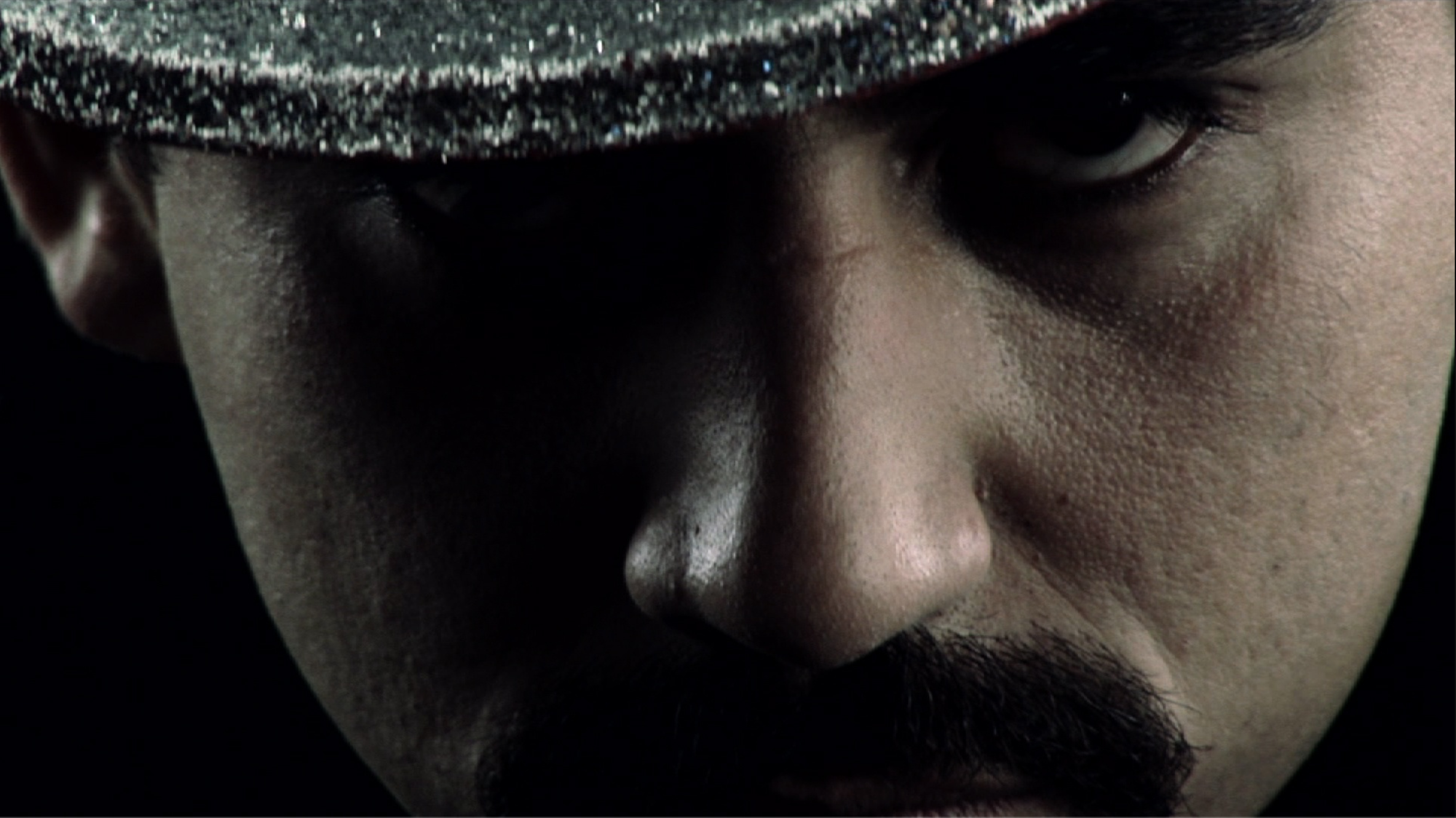 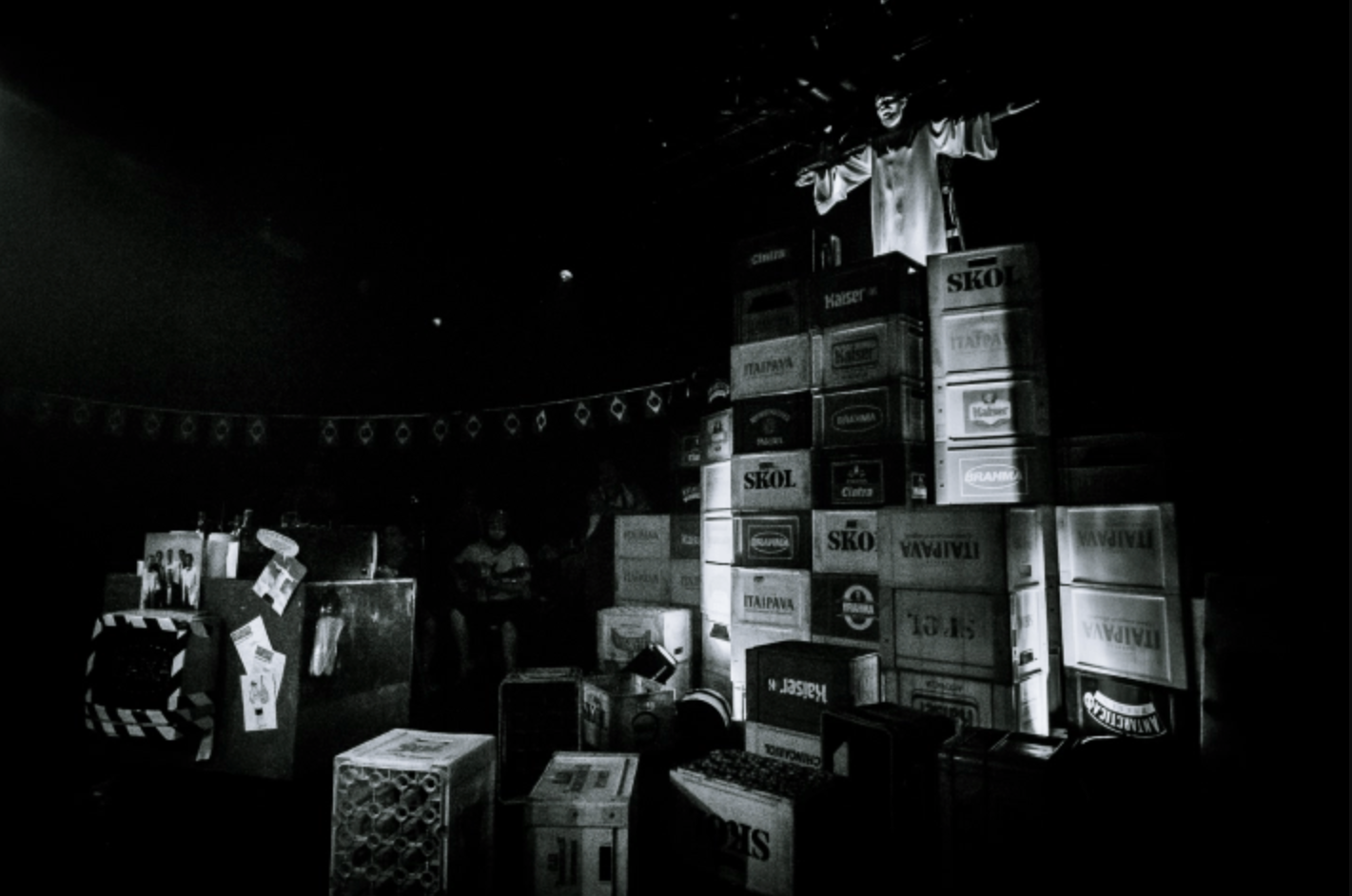 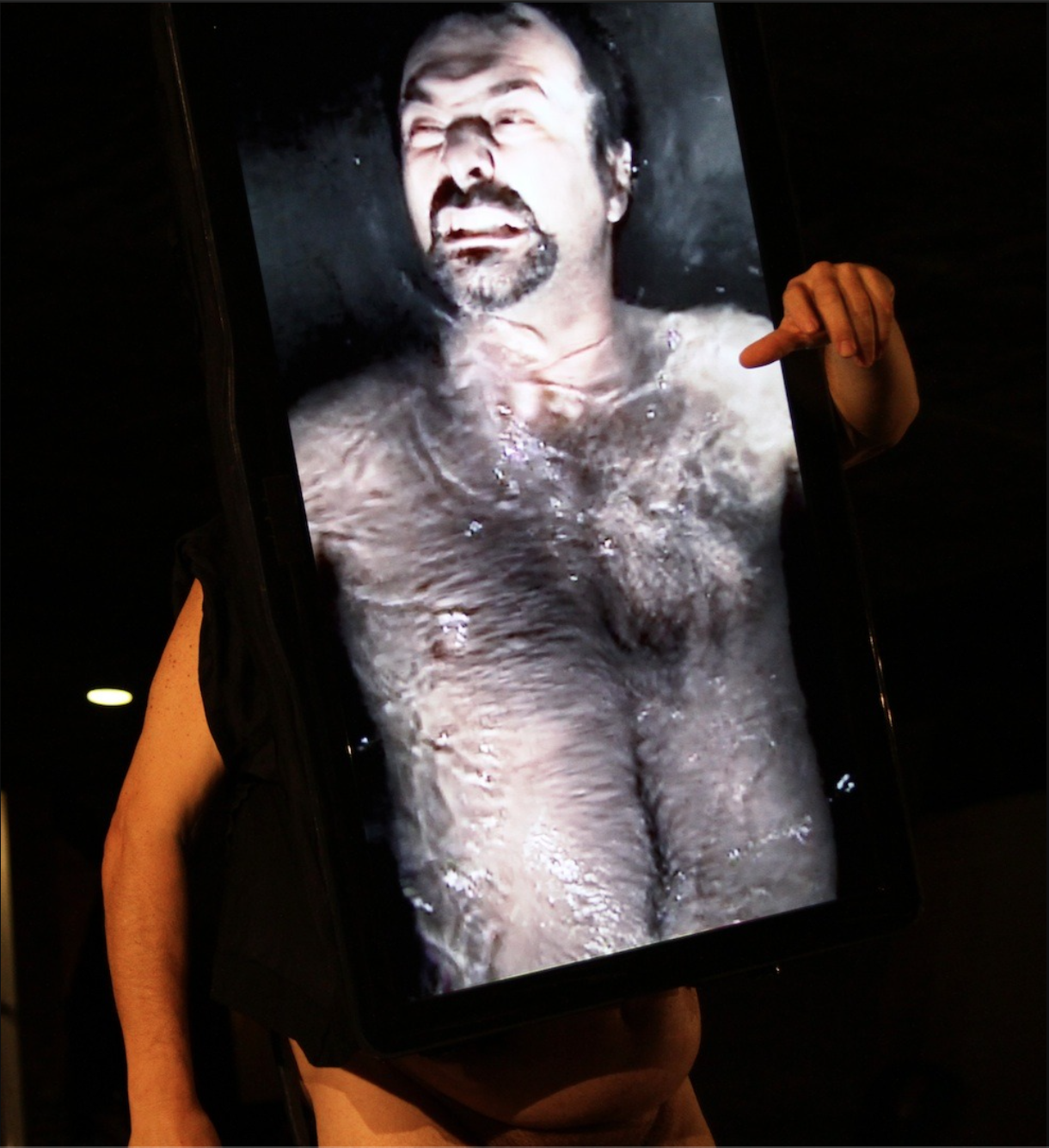 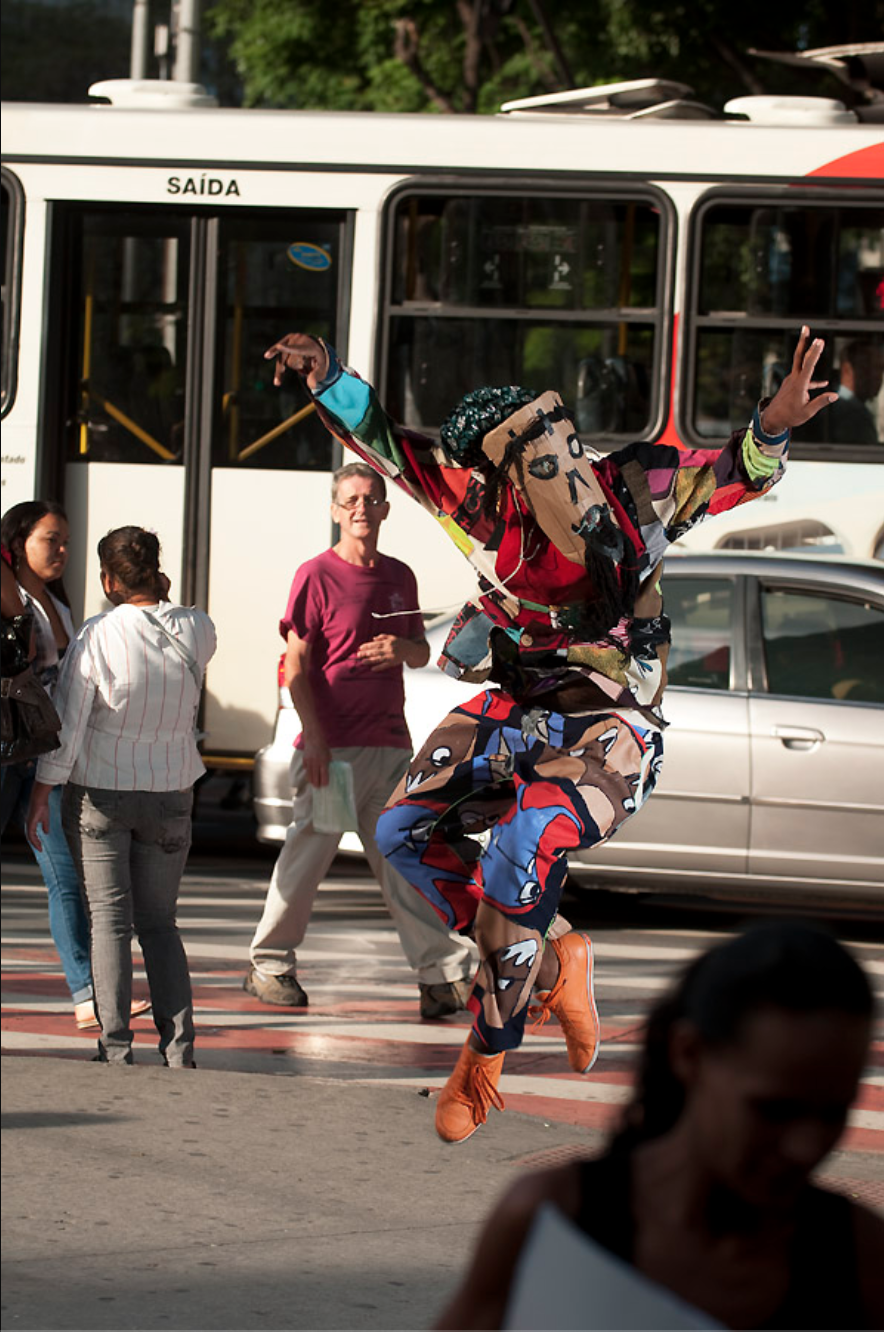 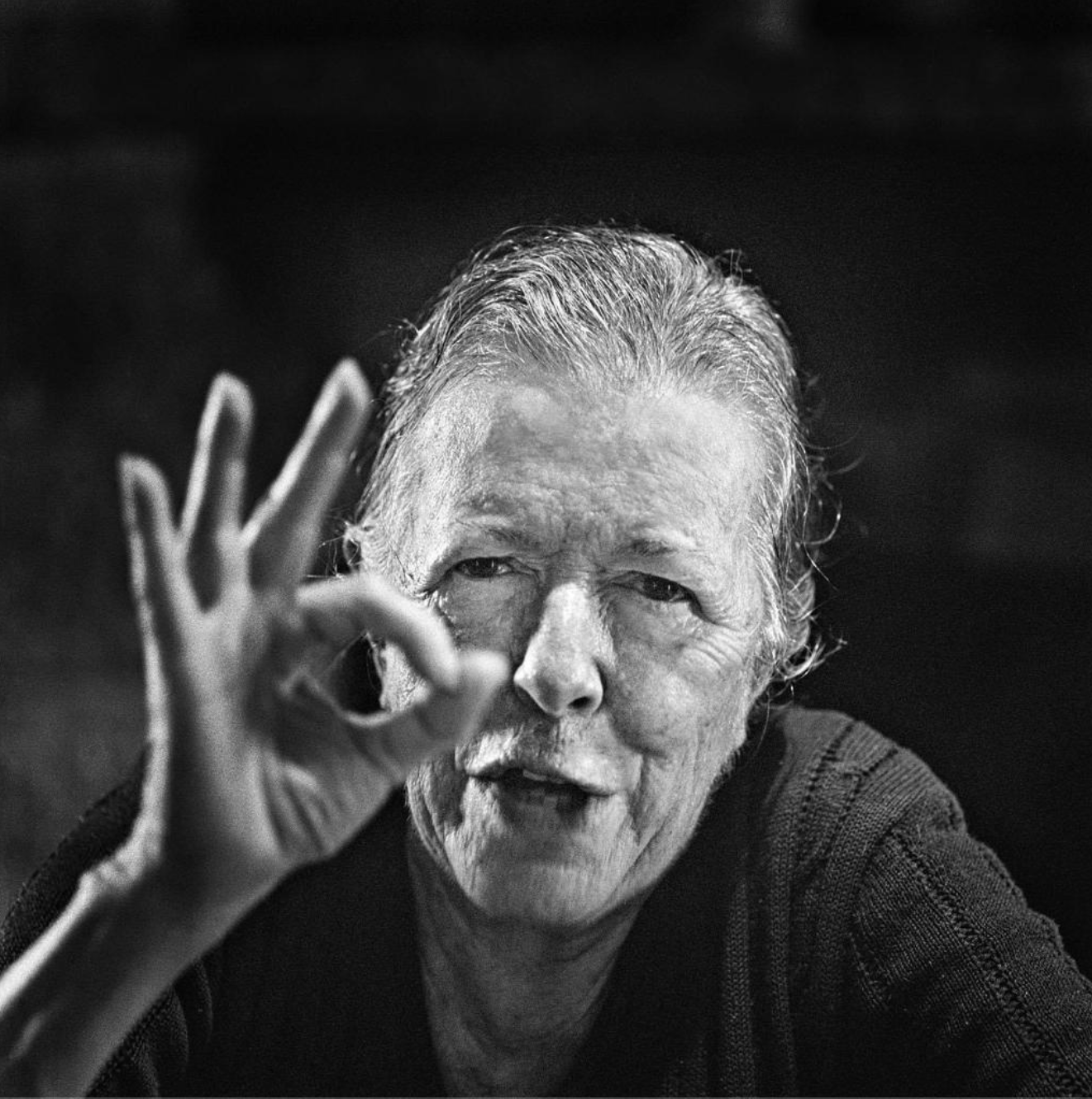 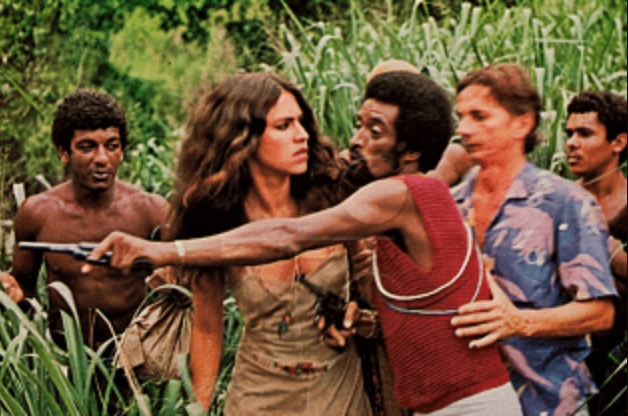 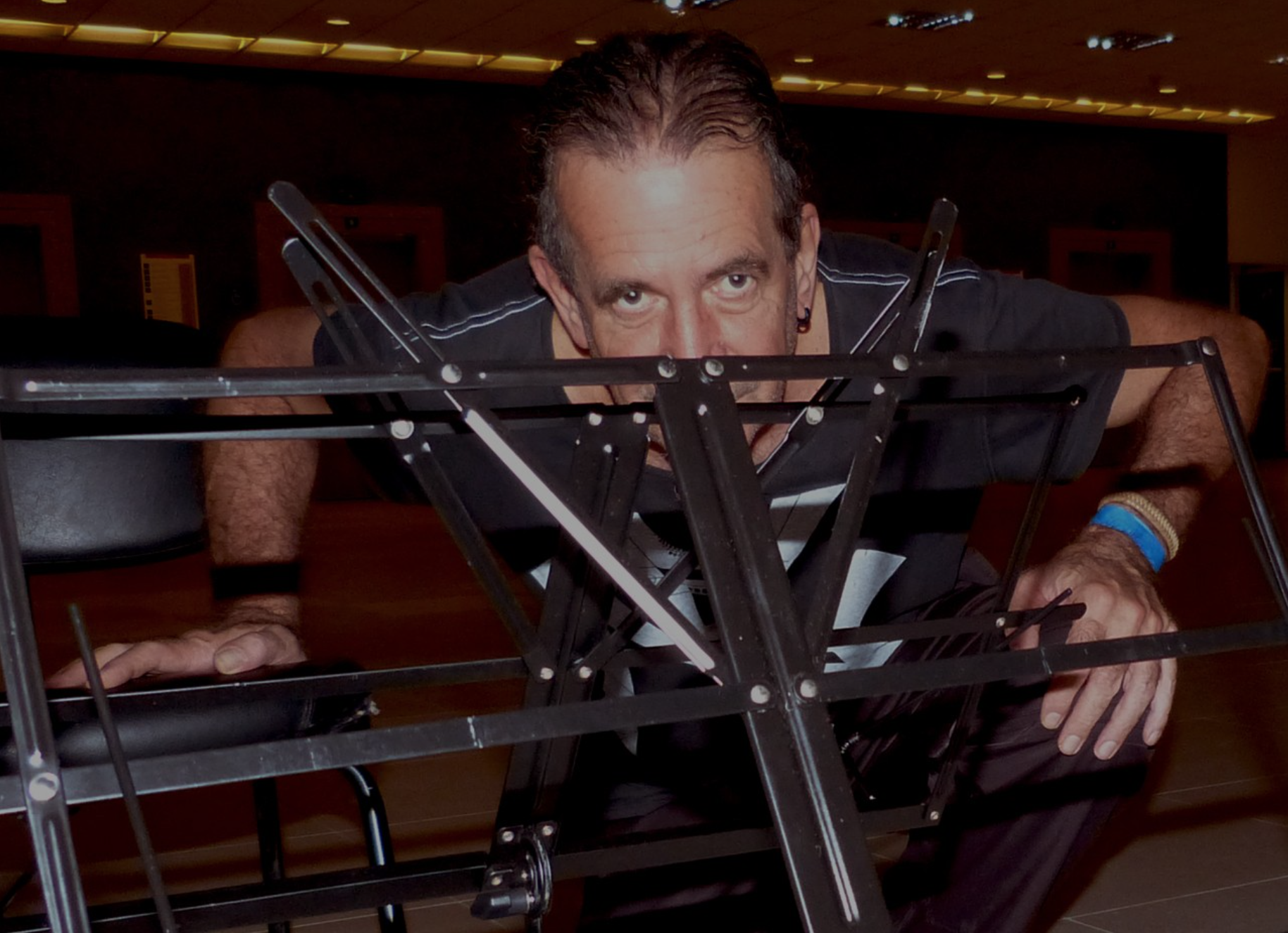 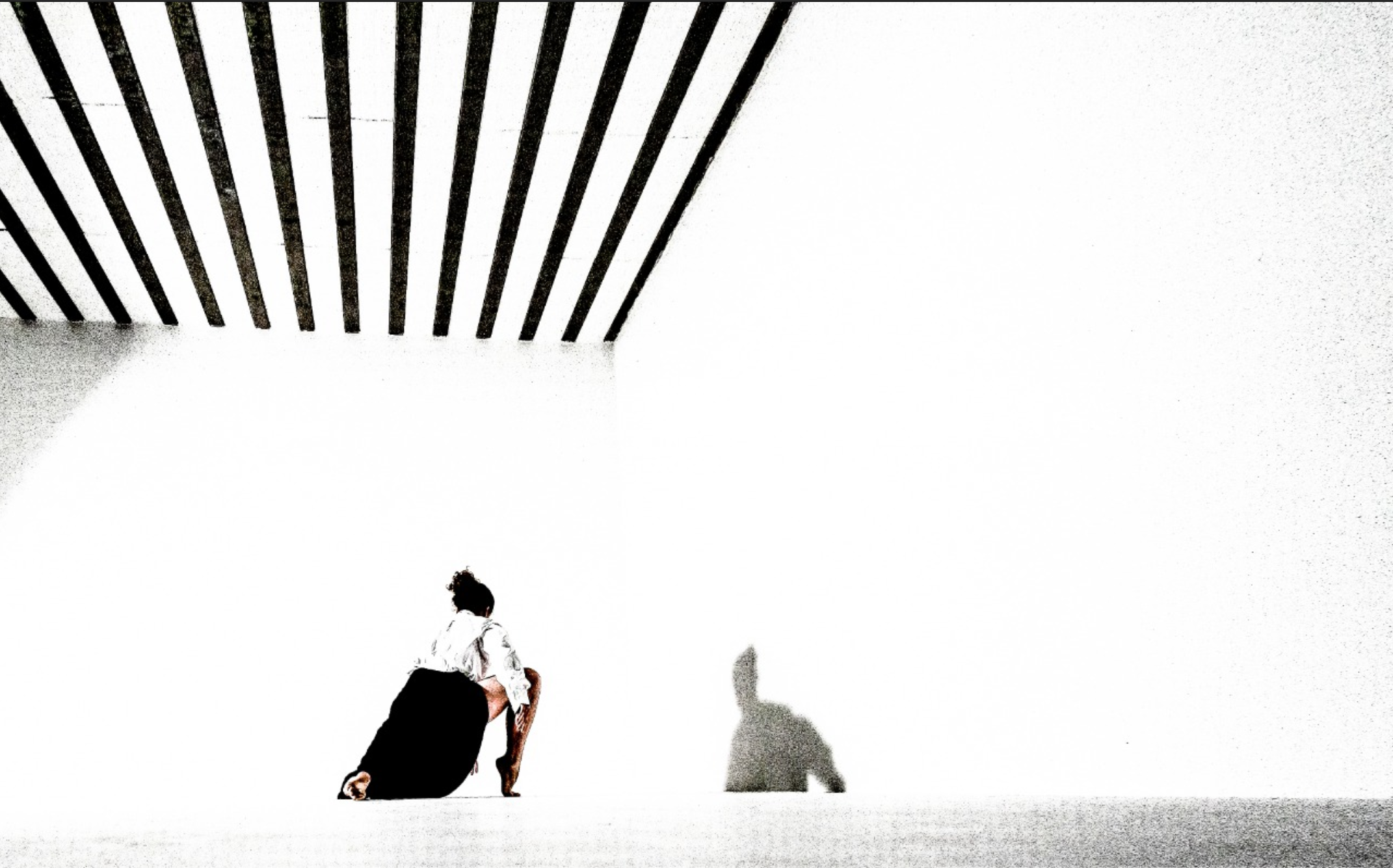 Marcus Galinã and The Collective Companhia Monte de Gente emerged from the Brazilian Public University. Within the UFRJ’s Theater Directing course, Galiña mobilized a group of artists that performed twice inside the University and, from there, went forward in the city scene: Mundo Grampeado – Uma Opera Tecno-Tosca (“Wiretapped World – A Techno-Precarious Opera”in a literal translation) performed in more than 10 theaters around the city, in many different versions over the years, like in a cabaret, always updating the script of the play with recent political events. The Collective then performed the children’s musical play “Aninha against the Sorcerer of Lixoxx” and another two musicals with the youth of the favela of Vila Cruzeiro “Dreams, a funk opera” and “Tuba Tuba and the Kingdom of the Volcano”. They developed a Collective Dramaturgy Online tool (which worked within the Facebook platform. Currently developing text and music for the new contemporary opera project called “O Cálice Botocudo” or “The Indigenous Chalice”). https://www.instagram.com/marcusgalina

Neville D’Almeida was born in Belo Horizonte, Brazil, in 1941. A filmmaker and visual artist, his first films encapsulated the zeitgeist of avant-garde movements from the 1960s-70s, and were apprehended and prohibited by the Brazilian military dictatorship. D’Almeida later gained status of box office champion in his home country on account of features such as “A Dama do Lotação” and “Rio Babilônia”. Internationally, he’s best known for “Bloco-Experiences in Cosmococa – program in progress”, a series of projects conceived with Hélio Oiticica which predicted the concept of art installations. https://www.instagram.com/nevilledalmeida

Otavio Donasci lives and works in São Paulo, Brazil, as multimedia performer, creative director, and as experimental theater director. Also is PHD in Comunication and Semiotic. Teaches Performing Arts. In the early eighties he created The Video Creatures, that perform wearing electronic video masks assembled over the actor supplying a pre-recorded video face. Otávio Donasci has been invited to perform at the most important Brazilian Art Festivals (Videobrasil and São Paulo International Biennial) and in diverse cities around the world: New York, Paris, Berlin, Montreal and Lisbon. In the nineties he developed with theatrical director Ricardo Karman, The Experimental Multimedia Expeditions, mixing interactive performance, theater, and tourism. For more informations about VideoCreatures see: https://youtu.be/NYHF6FrGG84

Christina Fornaciari is an artist and art researcher interested in Performance Art. She holds a PhD in Theatre from the Federal University of Bahia and a Masters Degree in Performance from Queen Mary University of London. Approaching themes that intertwine social, racial, autobiographical and gender issues, she also uses vídeo and photography as resources for developing her work. She has performed in events in Brazil and abroad, in countries such as China, Mexico, Italy, England, USA, Uruguay and Ecuador. More information: http://cargocollective.com/christinafornaciari

Pedro Granato is a director, actor, playwright and theater teacher with a degree in Cinema and Video from ECA-USP. Selected for Directors LAB with directors from around the world at Lincoln Center in New York in 2014. He is the actor-creator of the show “País Clandestino” presented at FIBA in Buenos Aires (ARG) and Santiago (CHI), at MIT in São Paulo ( BRA), at the Festival of Dijon (FRA), Almada (POR) and Guadalajara (MEX) and many other awarded plays. He is the Director of Cultural Centres and Theatres in the city of São Paulo and runs the theatre Pequeno Ato. https://www.instagram.com/pedrogranato

Gabriela Leite was born in Rio de Janeiro, Brazil, she started her studies of Classical Ballet at the state dance school Maria Olenewa, studied Modern Dance, Jazz, Contemporary dance. She is graduated in Physiotherapy and Pilates. Master student in Performing Arts at UFG. Developing her independent work as an author, and creative interpreter in various artistic projects, among them, the training project “A Arte do Mover” (the art of moving). Participated in festivals in Brazil and abroad with the Companies Nós da Dança, Laso Dance Co., Focus Dance Co., Motoperpetuo Dance Co. (CH) and Quasar Dance Co. Versatility is characteristic on her work. Experienced by her, as performer in works on television, theater, concerts including Rio de Janeiro’s carnival, artistic residencies, such as Play Practice Residence (IN), and with choreographer Morena Nascimento. https://www.instagram.com/gabrielaleitelima

Rui Moreira is a dance artist and cultural researcher. He acts as a creative interpreter and creator. He is a social activist for life. https://ruimoreiraciadedancas.blogspot.com/p/rui-moreira.html

Lenerson Polonini is a theater director, light designer and producer. A researcher and a hybrid visual, and performative theater. He founded the Companhia Nova de Teatro and developed researches on the work of Samuel Beckett and on the visual scene of the 20th century. Polonini directed “Act without Words I and II” in 2001, “Beckett in Repertorie” with participation of the actor Paulo César Pereio, “Berceuse”, French version of “Rockaby”, with Renée Gumiel in 2002 and “Beckett in Repertorie 2” in 2003, “Beckett in Repertorie 3” and “Ulysses” in 2005. In 2015/17, he directed Foreman Trilogy Project  (Bad Boy Nietzsche, Old- Fashioned Prostitutes and The Gods Are Pounding My Head) by Richard Foreman with support from Secretary of Culture of São Paulo State and SESC São Paulo. In 2019, he directed the “Kassandra Hecuba” project, a work in progress in Analogio Festival in Athens, 25 Ore Theatre Festival Non Stop ( Sibiu),  and Teatrul de Artã, in Bucarest, both in Romania. He is Brazilian Cultural Ambassador of La MaMa. https://www.cianovadeteatro.com/

Jurandy Valença was born in Maceió, Alagoas, and has been living in São Paulo since 1990. In these almost 30 years, he has worked in the most diverse areas of culture. He lived and worked with famous author Hilda Hilst [1930-2004], of whom he was an advisor and friend, being project director of the Hilda Hilst Institute 20 years after living in Casa do Sol, a place where the writer and poet lived and became a cultural institute. He participated in more than 70 exhibitions, between individual and collectives. He received awards and acquisitions and did several curatorships. https://www.instagram.com/juravalenca7