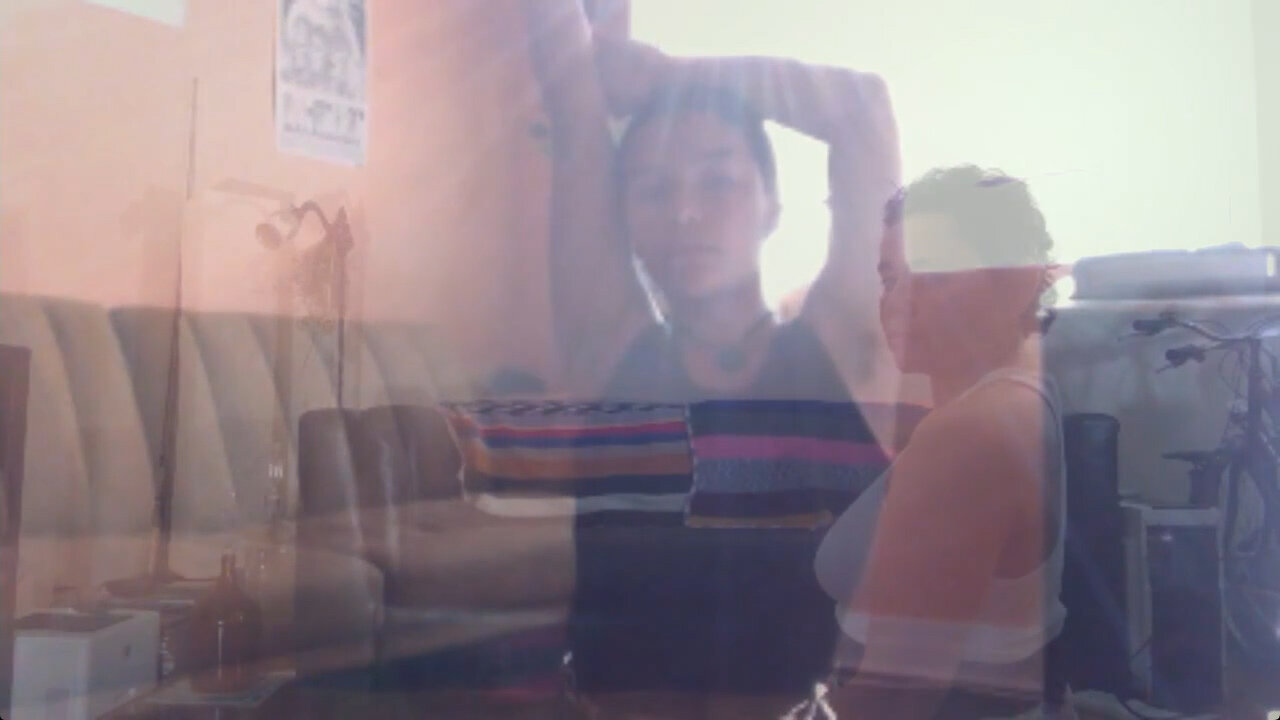 Boys With Brains is an interactive digital creative collaboration between Dillon Yruegas and Jesse O’Rear. Dillon (he/él) is a queer trans latinx theatremaker currently based in Boston who holds both a BFA in Theatre and a BA in Spanish from Texas State University. Jesse (he/him) is a scholar, artist, educator, and newly minted PhD of performance from the University of Texas at Austin. Boys With Brains regularly streams live video gaming and performance at twitch.tv/boyswithbrains. Tune in and tell the boys what to do.

Here is my bio : Joseph Brock is a Brooklyn-based creator interested in how people navigate within and between the inner/personal and outer worlds. He began with the double bass; in truth he never meant to play bass to begin with. A lucky short nap during the intro to the string family in elementary school and the bass was all that was left. Now, using sound video, and other means, he explores how we relate to each other and can navigate a world fraught with danger. A major goal of his work is to provide room for, and at some points, force internal discourse. How do we sort internal desire, wants, and needs on a personal level, with our kith, and then finally on a social level? *Replace 3rd person with 1st please

Smomid is a project by Nick Demopoulos, who is a performer, musician and instrument builder. Smomid only utilizes instruments he has designed and built to perform interactive computer music. The name is derived from an acronym of his primary instrument: “String Modeling Midi Device.” Smomid music often features glitchy and scattered beats, sampling, abstract textures, ambient spaces, and improvisation. Smomid music draws on many varied influences and creates bizarre juxtapositions with deft sonic versatility, with heavy beats, Gregorian Monks chanting and Taiko drum sounds all coexisting comfortably.  After listening to several Smomid tracks one gets the impression that anything is possible and that all sound universes can coexist. One thing that doesn’t come across in an audio transmission is that there is also a visual aspect to Smomid Music. All the instruments emit light through high powered LEDs, and some illuminate visual animations and secret messages through several LED displays embedded in the instruments. As a guitarist Nick Demopoulos worked with NEA jazz master Chico Hamilton between 2008-2013 and recorded on the albums The Inquiring Mind, Revelation and Euphoric. He also released recordings with Exegesis, a group that mixes jazz and electronic music. In 2008, on behalf of the U.S. State Department, Exegesis worked as cultural diplomats, performing in Bahrain, Yemen, Oman, U.A.E and Kuwait. Other artists he has performed and/or recorded with include Vernon Reid, Camille Brown, George Bohannon and Jimmy Owens. There are three full length albums of music created with Smomid and Pyramidi instruments, Pyramidi Scheme (2019), A Smoment in Time (2017), and Rhythms of Light (2015). With his Smomid Nick has performed at Lincoln Center, and been featured on the Discovery Science Network, Guitar World, Create Digital Music, BOMB magazine, and Metal Injection among other media outlets.

Rhiannon McGavin has failed the driver’s license test three times so far. Her work has been published by Tia Chucha Press, CURA, The Believer, Tagvverk, and Teen Vogue. She is the former Youth Poet Laureate of Los Angeles, as well as the 2019 recipient of the Fred and Edith Herman Memorial Prize from the Academy of American Poets. Her first book Branches is available from Not a Cult.

Nia & Ness are a Black, out-Lesbian, performance art duo based in Rosendale, NY, whose work serves as a visual-auditory diary of their daily lives. They believe that it’s necessary for their specific stories, as Black Lesbians, to be shared, and it is their responsibility to share them. They met and became a couple in 2013, and founded their company in 2016. In 2017, they premiered their first evening-length work, run., and have been touring nationwide ever since. They’ve been keynote speakers at the FLAME Conference at Brown University, and have performed their work at several University of California schools, New York University, Sarah Lawrence College, Temple University, Bard College, Harvard College and more. They’ve also performed at Brooklyn Pride and Harlem Pride, the Ohio Lesbian Festival; were recipients of the BAX Summer Space Grant, inaugural recipients of the Virginia Giordano Memorial Fund; and won the 2017 National Women’s Music Festival Emerging Artist Contest, and named the “Heart Power Couple” for the VORTEX Fire and Brimstone Awards in 2019. Also last year, at OUTsider Fest in Austin, TX,  Nia & Ness premiered their second evening-length show titled home., which they were touring before COVID-19. To follow them on their journey or learn more about them, check them out on social media @niaandness or their website https://www.niaandness.com/.

Carrie Sijia Wang is a Chinese-born, NYC-based multimedia artist working in performance and interactive installation. She is interested in how systems, rules, and regulations affect cultures, beliefs, and rituals. The juxtaposition between the real and the fictional, the rational and the absurd is a recurring theme in her work. Wang is a Mozilla Creative Media Award recipient,  a resident at Pioneer Works in the summer of 2020, and a 2019-2020 research fellow at the Interactive Telecommunications Program at NYU. She has shown her work at venues including New York Transit Museum, Ujazdowski Castle Centre for Contemporary Art, and CultureHub.

Tong Wu is a new media artist, born in China, raised on the Internet, and now working and living in New York. Her work focuses on the fluid and unprecedented relationships and the dynamic power game that humans are constantly developing with ourselves, within the community, and with a social system of control that is heavily intervened by machine. Obsessed with the idea of “seeing” as a natural metaphor of obtaining power, Tong creates work with strong visual elements that illuminate and critiques our current digital identity crisis as both the observer and the observed through digital mediums including videos, hybrid digital sculptures, human avatars, mixed realities, and immersive performances.