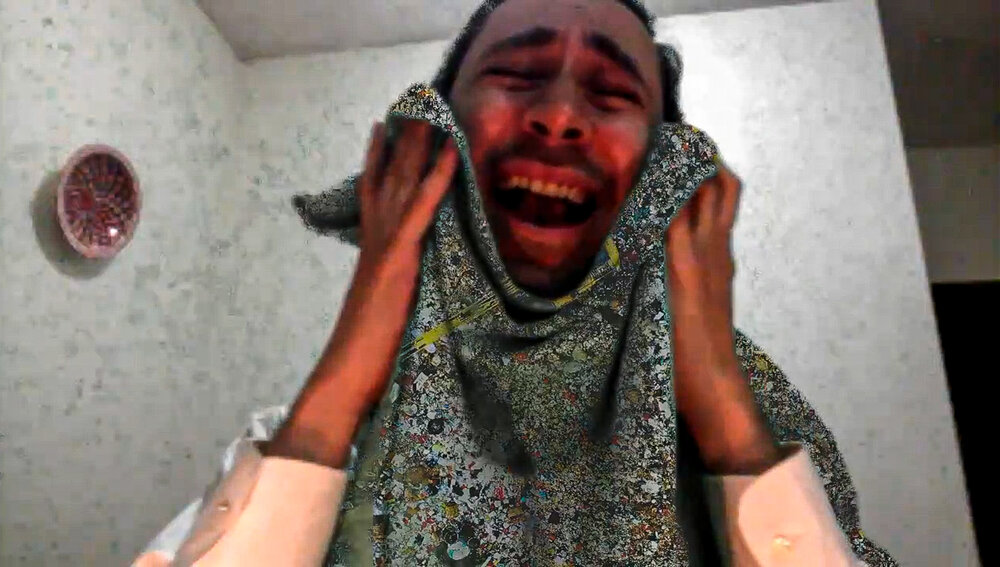 Krzysztof Garbaczewski (born 1983 in Białystok, Poland) is a director, set designer and author of adaptations of, among others, The Tibetan Book of the Dead, Gombrowicz, Dostoyevsky, Shakespeare, Reymont, Jelinek, Roussel, and the poets Leśmian, Białoszewski and Dante, which form the basis of his so-called “Meditations” combining performance, visual arts and music. The first Polish theatre director working in Virtual Reality technology. His characteristic collage style, the use of video projection and direct broadcasting refer to our contemporary cyber sensitivity. In his performances Garbaczewski talks about the most important existential issues and looks for border experiences. Ironically looking at everything that is theatrical (e.g. stage illusion, the actor’s attitude to the role, faithfulness to the text of the drama, scenicism), he comments on and exceeds the previous experimental attempts, at the same time considering the genesis of the theatre itself, which is ritual. Garbaczewski’s work is a complex ecosystem of interpersonal cooperation, an androgynous way of being outside the gender divide, nature and cyberspace. Garbaczewski not only draws attention to the organic relations that occurred during the formation of certain performative narratives, but also stresses queer biodiversity. It functions as a space unrestricted by predetermined results, dichotomous divisions and hermetic categories, as a form suitable for future relations. Founder of the Dream Adoption Society collective, which focuses on developing the language of digital arts – virtual and augmented reality in the space of theatre and performance art. In his practice he combines new technologies with performance art and installations. Dream Adoption Society uses such solutions as: scanning and implementation of actors into a virtual 3D live environment, applications enabling multiple viewers to experience virtual reality at the same time, creation of digital avatars and VR environments (Virtual Reality) combined with real scenery and props or use of holographic characters generated in real time in augmented reality.

Raven Kwok (aka Guo, Ruiwen) is a visual artist, animator and creative technologist. His artistic and research interests are mainly about exploring generative visual aesthetic brought by computer algorithms and software processes.

Robert Patrick from Roswell, New Mexico, has participated in Off-Off Broadway since 1961. Hundreds of productions of his plays in dozens of New York theaters resulted in publication and thousands of productions worldwide. His Kennedy’s Children (1973) went to the West End and Broadway. He has lectured in schools and theaters in many countries and in every state but Hawaii. He is the author of a novel, Temple Slave, and a memoir, Film Moi, as well as numerous poems, essays, reviews, and songs. Since discovering at 75 that he has a singing voice, he appears in many Los Angeles cabarets. He has become an amateur archivist of materials relating to the Caffe Cino, La MaMa, and other early Off-Off Broadway theaters.

Lisa Parra is a New York based choreographer and performer. Her work has been shown in New York at Movement Research, New Dance Alliance, Center for Performance Research, Triskelion Arts Center, Green Space, and Experimental Media and Performing Arts Center. Internationally, her work has been presented in Portugal at Alkantara in Lisbon, Centro para os Asuntos de Arte e Arquitectura in Guimaraes, Fábrica de Movimentos in Porto, and DVIR CAPa in Faro; in Spain at Gracias x Favor festival at the Teatro Pradillo in Madrid, Bilbao Eszena in Bilbao and in Barcelona at the IDN Festival. Lisa was recently a 2017-2019 Artist in Residence at Movement Research. In addition to her own work, she has performed in works by Karen Bernard and Emma Rose Brown, and has an ongoing collaboration with Protugese media artist, Daniel Pinheiro with their research project LAND that focuses on online performances.

Rosi Rocha is an LA based vinyl DJ, model, performance artist, and educator.

Ali Santana is a multi-disciplinary artist working with collage, video, photography, sound, and performance. Santana, a native Brooklynite is influenced by community, natural patterns, unquantized rhythms and, ancient cultures. His work often explores topics relating to personal identity, observations of nature, and sensory perception. Ali’s live audio-visual shows combine experimental cinema with booming beats, sound design and field recordings which he edits, loops, and arranges in real-time to perform an abstract method of storytelling that he dubs Boom Bap Cinema. Ali is also an award-winning educator who shares his artistic practice, curiosity and experiments in music production, performance, and video art with students of all ages. He prioritizes accessibility, creative problem-solving and resourcefulness, emphasizing that anyone can use art as a tool for change. Ali recently received the 2019 award for ‘Innovation in Teaching Artistry’ from the Association of Teaching Artists for his work with The Museum of Modern Art (MoMA) Teens program.

Lake Simons is a director, designer, puppeteer, physical performer, and a maker of things. She has collaborated with many artists creating theatre productions from the ground up utilizing puppetry, movement, & live music. But most importantly Lake relies on make-believe. Lake has received multiple Jim Henson Foundation grants in support of her original puppetry productions. As an artistic associate with the Hip Pocket Theatre in Texas, Lake participates as a director, performer, and designer. Lake is a director of the Puppet Lap at St. Ann’s Warehouse. She teaches in the theatre department at Sarah Lawrence College. Lake attended Ecole Jacques Lecoq in Paris, France and North Carolina School of the Arts.